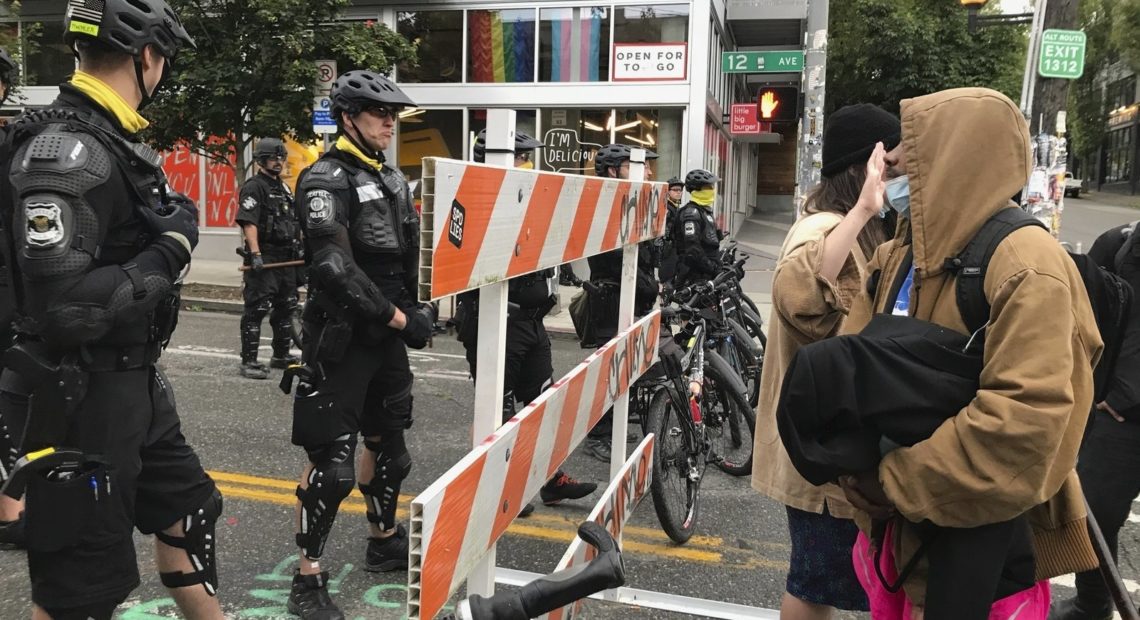 Durkan’s order calls for clearing barricades out of the streets near Cal Anderson Park and the police department’s East Precinct — two main landmarks of the zone widely known by its acronym, CHOP.

As of 9:25 a.m. local time, officers had “made a total of 31 arrests for failure to disperse, obstruction, assault, and unlawful weapon possession,” Seattle police said via Twitter.

Officers who made their way into the area Wednesday morning announced that protesters could leave through a “safe exit” to the south, the department said.

As of Wednesday, the Cal Anderson Park area is now closed. The mayor ordered city agencies to remove tents used by people who have been camping in the park, saying police should order protesters to leave.

“I can see people wearing florescent vests with ‘SDOT’ on them putting tents and stuff from the side of the road into bags,” said Anna Boiko-Weyrauch, reporting from the scene for NPR member station KUOW. “There are large clusters of police on every side, on the perimeter of the CHOP, some with bicycles, very heavily outfitted, some have coffee at this point in the morning.”

#UPDATE: First look at the #CHOP zone since Seattle Police cleared it out this morning.

Dozens of tents and lots belongings left, but all protestors have been cleared out. @KIRO7Seattle pic.twitter.com/dULugXBtBz

The protest zone was established in early June when Seattle’s Capitol Hill neighborhood and its prominent precinct building became a gathering point for protesters against racial injustice following George Floyd’s death while in police custody in Minneapolis.

But now, Durkan said, conditions in the area “have deteriorated to the point where public health, life and safety are threatened.”

“The CHOP has become lawless and brutal,” Best said. She noted that several shootings, including two deaths, have occurred in the area, along with “robberies, assaults, violence and countless property crimes.”

When police largely ceded control of the area last month, protesters quickly formed a community of activists, artists and speakers. The zone hosted movie nights, a medical clinic and discussions about how to address systemic racism and problems with police use of force. But it also became known for violence that sometimes erupted during the night.

#CHOP – @SeattlePD has secured the perimeter of the East Precinct. LIVE https://t.co/tzCZmFGmvd pic.twitter.com/UHvPlgOklp

Some of the officers deployed Wednesday to the Capitol Hill Organized Protest zone will be wearing “a higher level of protective gear,” the police chief said, describing it as a necessary step due to recent violence.

Cal Anderson Park was temporarily closed to the public on Tuesday to allow city workers to assess damage and plan for repairs. The city’s transportation department, assisted by police, also removed 10 concrete barriers — but as crowds formed around them, the work crew left the area.

Durkan said the effort to clear the obstructions “was quickly met with agitated opposition to the removal.”

Protesters there have listed three main demands: to cut funding for the Seattle police by 50%, to devote that money instead to community efforts such as restorative justice and health care, and to ensure that protesters are not charged with crimes. Many protesters are also calling on Durkan to resign.

“Black Lives Matter groups say they intend to continue their protests, though not necessarily in that area,” NPR’s Martin Kaste reported from Seattle.

The mayor’s emergency order calls for Seattle Parks and Recreation to work with the community, including residents and protesters, alike to develop a plan “to preserve the public art, create a community garden and other possible features like a conversation corner.”