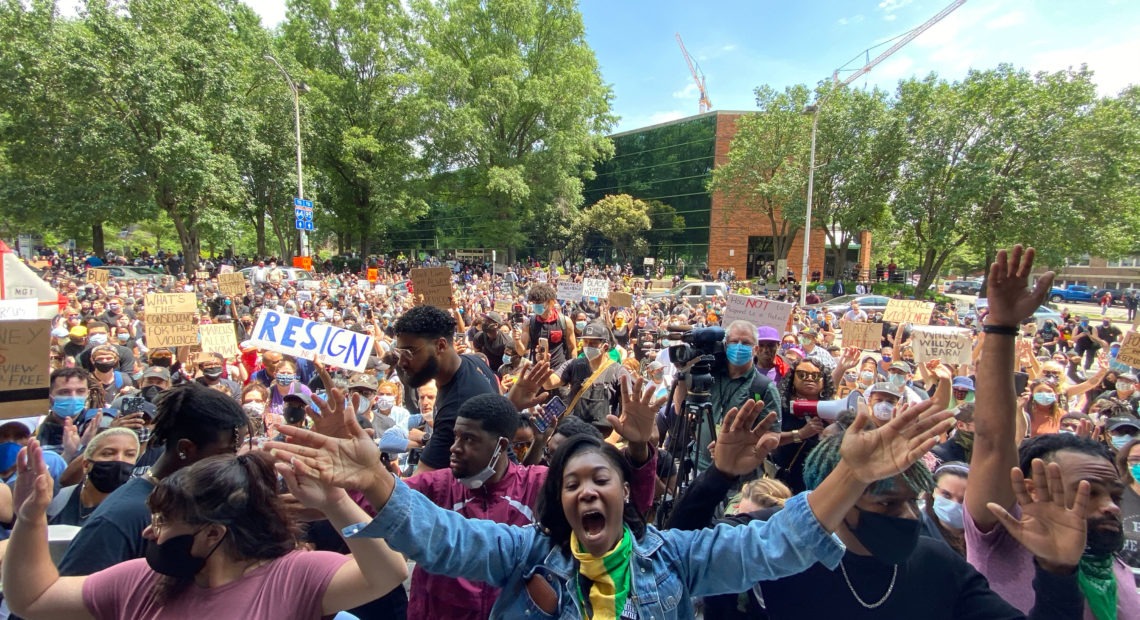 For the past month, as anti-racism protesters across America have revived the campaign for the removal of statues, many eyes have focused on Richmond, Va. — the former capital of the Confederacy.

Some of those monuments have been toppled by protesters; others have been taken down by the city.

Regina Boone, a photographer for the Richmond Free Press, has been capturing all this action, as well as the violent standoffs between police and protesters. 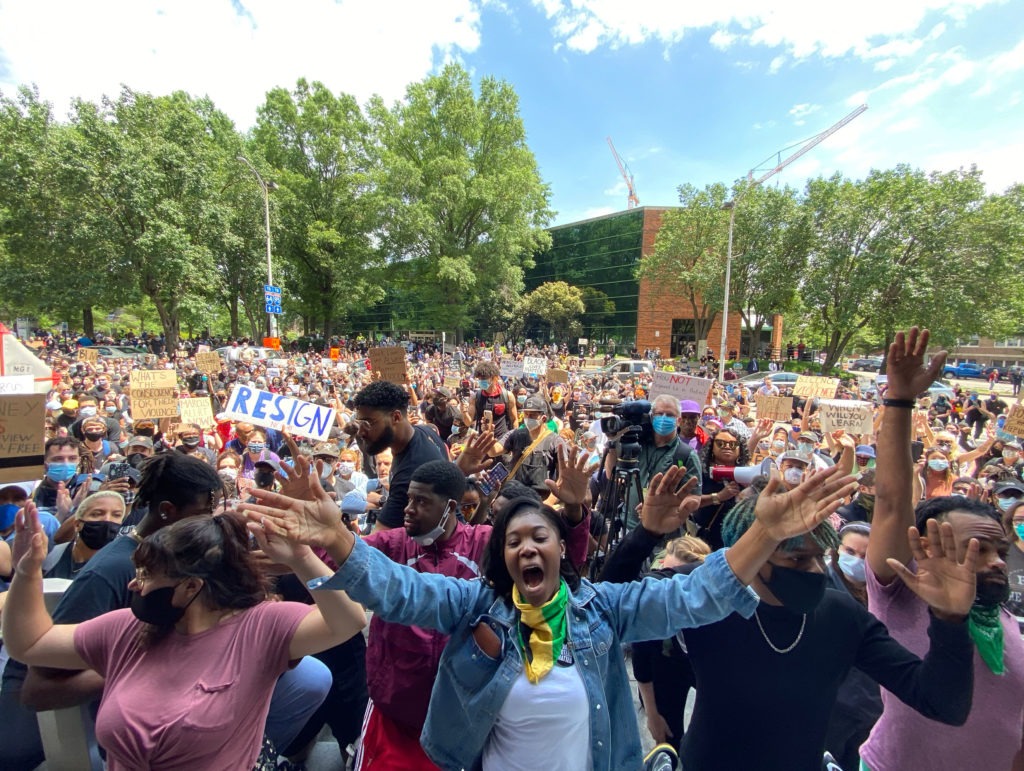 A crowd of about 1,500 people call for the resignation of Richmond Mayor Levar Stoney and Richmond Police Chief Will Smith on June 2 outside of City Hall. CREDIT: Regina H. Boone/Richmond Free Press

“It’s intense. It has an exhaustive sort of feel to it. But then there’s empowerment. There’s exhilaration, then mixed also with anger, mixed with determination. So, I can’t just say one word,” she says. “I can say that it’s fully alive and ready.”

At the same time, those feelings aren’t completely new for Boone, who works at a Black newspaper in the city that her parents, Raymond and Jean Boone, started in the 1990s.

“The monuments have always been a part of our conversation since I was a child growing up, the early part of my life in Richmond — that they were symbols of hate and symbols of white supremacy,” she says. “So, I’ve always looked at these statues as being quite evil and always heard in my household that they needed to come down.”

Here are excerpts from Boone’s interview with Weekend Edition.

You have been out documenting these protests, seeing this moment. Can you tell me about some of the people that you’ve been photographing and what you’ve experienced while you’ve been doing that?

Sure. I also just want to be clear that it’s not just me photographing for our newspaper. I’m doing it along with my colleague, Sandra Sellars, who’s been at the Richmond Free Press for more than 20 years. And what we see are people who are angry, who are fed up, wanting change right now. We’re seeing children come out and we love to photograph children because we hope that when they see themselves, whether it’s on social media or in our newspaper, that they see where they are in history. And one day later in life, they can see that they were a part of this change. 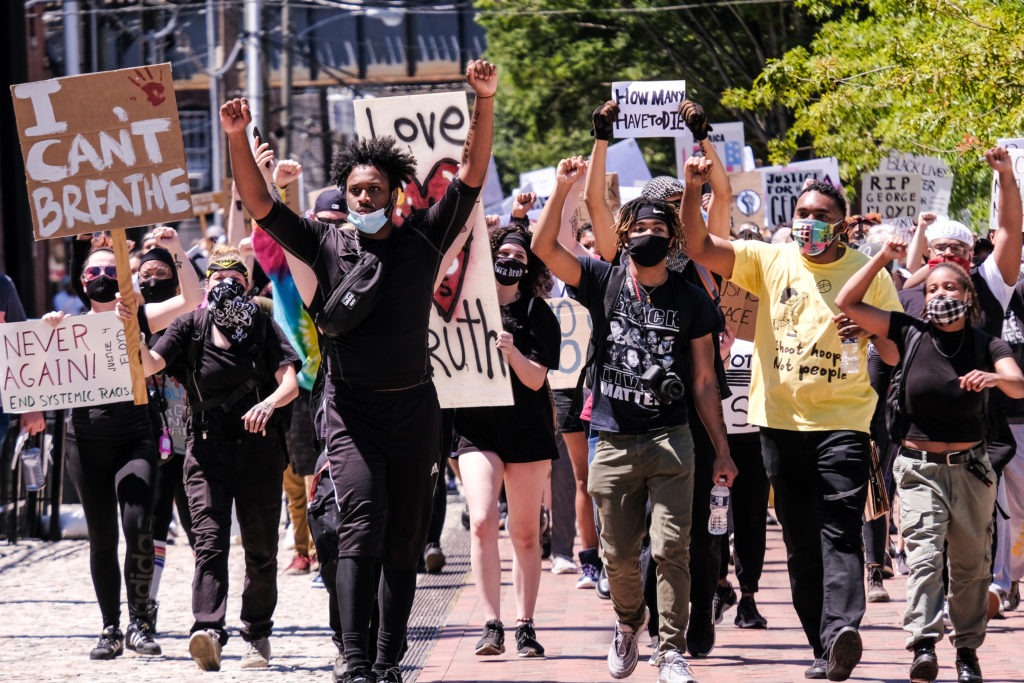 So, we’re seeing a mixed group of people — Black, white, Latinx, Asian Americans — out on the streets together. And this kind of is a rare scene in Richmond. But I’m meeting people — like I met a Richmond public school music teacher and she had her cello out in front of the Robert E. Lee statue. And she’s out there playing this classical music that just brings chills to your bones. And she has a slideshow of words explaining the pain that she has felt as a Black woman. And so as we see her, as I saw her and I locked her in with my camera, I felt her pain. I could identify with it.

So, yeah, I definitely think so. I think there is a responsibility that we have as Black women documenting this movement because, you know, oftentimes our stories are told by other people, other people who don’t look like us, other people who are not breathing this story every day.

Our narrative is oftentimes controlled by people who just don’t get it. And I get it. Sandra gets it. Our newsroom gets it. This is not a new story for us. People are finally catching up to what my dad was always preaching and always fighting for. You know, we’ve been saying this all along. It’s our history.

You returned to Richmond from a very impressive career to work at the paper [your father] founded serving the Black community. You were gone for 17 years. What does being able to document this mean for you?

I mean, it’s really personal. You know, some days I’m out there and I am actually brought to tears because I’m thinking about my father and I’m thinking about what he fought for every day. And I’m thinking how, as a child, as a teenager, sometimes I didn’t fully get his anger. He just wanted a better world for Blacks, but for everyone. And it breaks my heart that he’s not here.

But on the other hand, he prepared me for this moment. And I believe there are no coincidences — that the timing for me coming home, this was meant to be. And he’s what keeps me going. He’s what keeps so many in Richmond going, I think, because they knew his passion. He taught me everything that I know in terms of how to stand strong and how to document these moments and why it’s so important to be on the front lines.

Daniel Hensel and Ed McNulty produced and edited the audio for this story. Emma Bowman adapted it for the Web.