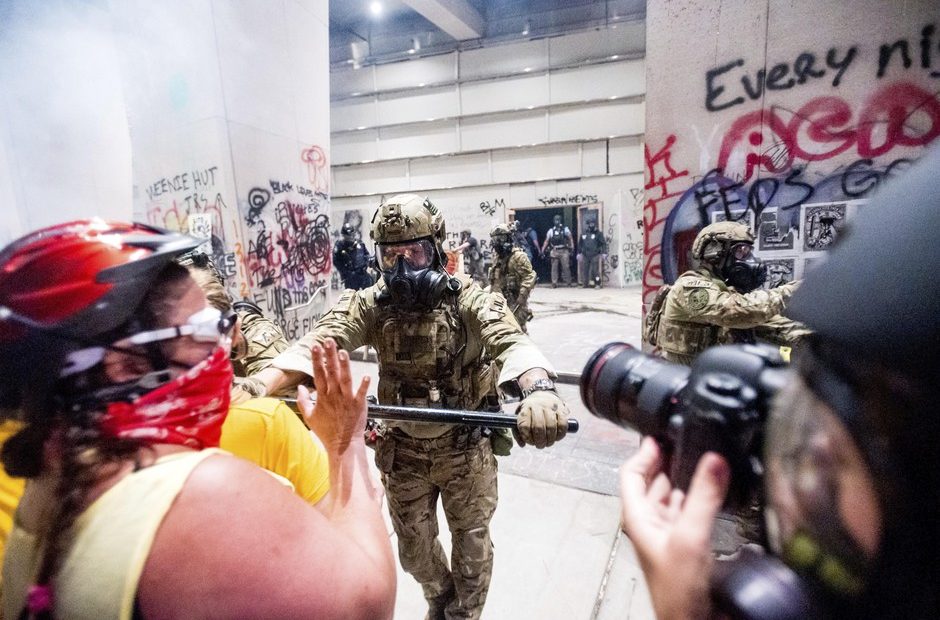 Judge Restricts Force That Federal Officers Can Use Against Portland Protesters

U.S. District Judge Michael H. Simon has temporarily curbed the use of force by federal officers deployed to Portland, restricting their interactions with legal observers and journalists observing nightly protests against police violence.

On Thursday afternoon, Simon issued a temporary restraining order on officers from the U.S. Department of Homeland Security and the U.S. Marshals Service sent to Portland to guard federal buildings. The restrictions will last for two weeks. The judge is still considering a longer-lasting injunction against federal law enforcement.

The order comes as part of a lawsuit filed by the American Civil Liberties Union in Oregon, alleging law enforcement has been targeting and attacking journalists at the protests.

The city of Portland was originally the main defendant in the suit. In early July, Simon issued a temporary restraining order against the city, placing new restrictions on how local police can interact with observers. Last week, the Oregon chapter of the ACLU successfully added the federal government to its lawsuit and immediately began pushing for similar restraints.

The new restrictions for federal officers are nearly identical to the limits already placed on Portland police. Federal officers are barred from arresting, threatening to arrest or using physical force against someone who they should “reasonably know” is a journalist or a legal observer unless they have probable cause to believe that person has committed a crime. Journalists and observers are also not required to follow orders to disperse nor can a federal officer tell them to stop documenting the protest.

One difference between the two orders: If a federal officer intentionally violates the order, it states they would not be protected under the doctrine of qualified immunity, a legal principle that often protects officers in police brutality lawsuits.

Simon’s decision was expected. Earlier in the day, during a hearing on the order, Simon said he was inclined to side with the plaintiffs, pointing to recent news reports of federal officers infringing on the rights of protesters: Chris David, a Navy veteran who was beaten with batons by federal officers as he tried to speak with them, and Donavan La Bella, who was shot in the head with an impact munition while holding a speaker above his head.

Attorneys for the ACLU provided the court with multiple accounts of legal observers and journalists who said they’ve been harmed by federal officers while identifying themselves as neutral observers.

A declaration from freelance journalist Mike Bivins said he was reporting on July 20 with a press pass when a federal agent lunged at him and pepper-sprayed him at point-blank range without provocation.

In another account, independent photojournalist Noah Berger said he was documenting protests on July 19 with two press credentials and two professional cameras. Berger said, “without warning or reason,” a federal agent shot him twice in the stomach and elbow with either a rubber bullet or impact munition.

Matt Borden, an attorney and partner at Braunhagey & Borden LLP, who’s serving as co-counsel with the ACLU, argued in the Thursday hearing on the order that the current treatment of the press by federal officers would have a chilling effect.

“If you do not have the press to report about what’s going on at these important protests, you only have the government’s version of events and at that point you have a totalitarian state and that is exactly what the First Amendment does not allow,” he said.

In his ruling, Simon contended that future harm to observers covering demonstrations at the hands of federal officers was neither “speculative or hypothetical.”

“Absent an injunction, the Federal Defendants will continue to target journalists and legal observers and require them to disperse or face force and violence by federal officers,” he wrote.

Andrew Warden, serving as counsel for the federal government, argued Thursday that the federal law enforcement were in a volatile and dangerous situation on the ground and said the order the judge was considering would place law enforcement in an “impossible position” where they had to choose between protecting public safety or risk running afoul of the court’s orders.

“We think it’s just not realistic to ask law enforcement officers to verify press passes or hat color while trying to restore order in a chaotic situation where lasers are being shot at them to blind them, fireworks are being targeted at them, everyone’s wearing masks, helmets, face coverings,” he said.

“And moreover nearly everyone appears to have a camera or a cellphone out to record things further making it difficult to distinguish legitimate journalists from others.”

After Warden made his opening remarks, Simon had questioned whether any injuries were caused to federal officers or damage had been caused to the courthouse by anyone who was a journalist or a legal observer.

He also questioned whether federal officers had received specific training in crowd control.

The attorney said they had no evidence of a journalist or legal observer causing damage.

He didn’t know the extent of the training, but pointed the judge toward a recent press conference by the acting Secretary of the Department of Homeland Security Chad Wolf.

According to a filing for the case, there are 114 federal law enforcement officers in Portland protecting the federal facilities.

The city supported a temporary restraining order against the federal agents, a fact which Simon said he was pleasantly surprised. Denis Vannier, senior deputy city attorney, said the city found the injunction issued against their own police force workable.

In a filing in support of the motion filed Wednesday, city attorneys said they believed the federal officers were escalating violence and harming Portlanders engaging in non-violent protests. Protesters have routinely made this same claim against the city’s own police force.