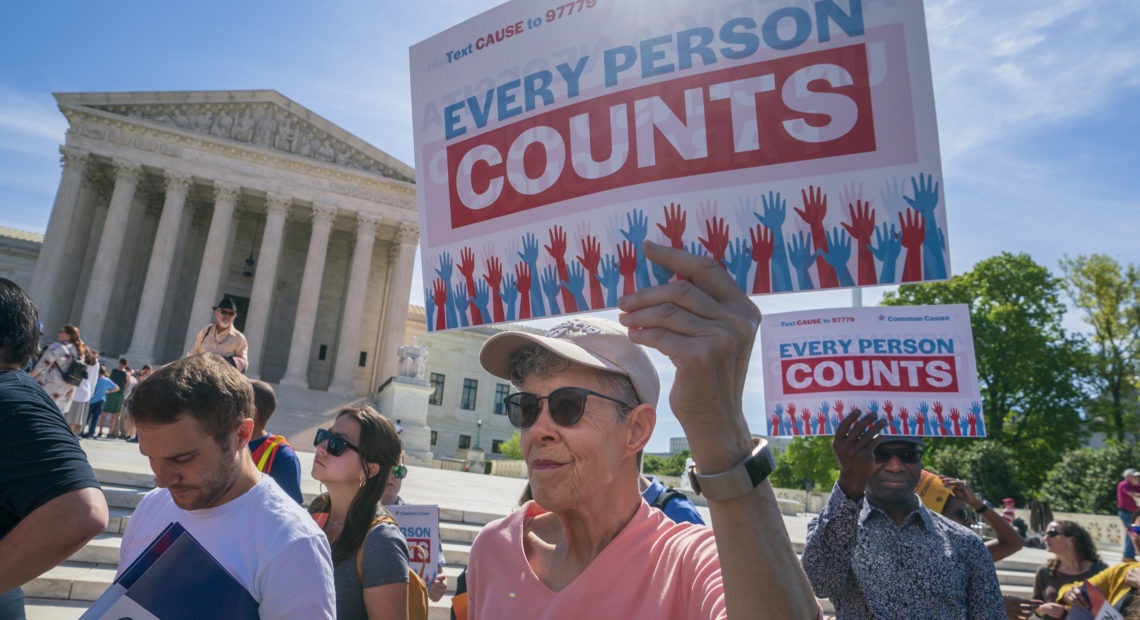 Groups led by Common Cause, a government watchdog group, have filed the first federal lawsuit against the Trump administration in response to President Trump’s call to make an unprecedented change to the population numbers used to divide up seats in Congress among the states.

Filed on Thursday with the U.S. District Court for the District of Columbia, the complaint was released two days after Trump issued a memo calling to exclude unauthorized immigrants from the constitutionally mandated count of every person living in the country that is used to redistribute seats in the House of Representatives.

The Constitution — which empowers Congress, not the president, with final authority over the census — requires a once-a-decade count of the “whole number of persons in each state” in order to determine how to reapportion congressional seats and, by extension, Electoral College votes. 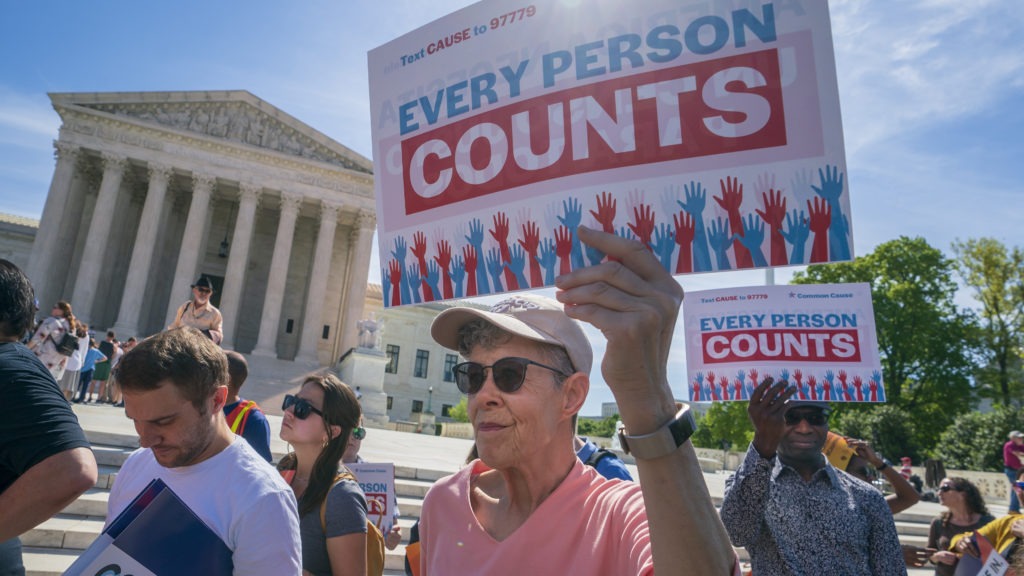 Demonstrators rally outside the U.S. Supreme Court in April 2019 to protest against the Trump administration’s efforts to add the now-blocked citizenship question to the 2020 census.
CREDIT: J. Scott Applewhite/AP

Trump, however, has ordered information to be produced that would allow him to exclude the number of immigrants living in the U.S. without authorization from the latest state population counts that the president is legally required to deliver to Congress after the census is complete.

Connecting the memo with the administration’s failed attempt to add the now-blocked citizenship question to the 2020 census, the plaintiffs allege that all of the efforts are “part of an unconstitutional concerted effort to shift political power away from racial and ethnic minorities, chiefly Latinos” to Republicans and non-Hispanic white people.

They are asking a federal judge to declare the president’s memo in violation of the Constitution and federal laws, as well as to block the administration from carrying it out and the clerk of the House from certifying an apportionment count delivered by the president that does not include people “on the basis of their citizenship or immigration status.”

Among the other plaintiffs are the cities of Atlanta and Paterson, N.J., a refugee advocacy organization based in San Diego called Partnership for the Advancement of New Americans, and a group of individual U.S. citizens who live in New York and Florida — all of whom allege that because they are in areas with an “above-average number of undocumented immigrants,” Trump’s memo would hurt their rights to fair representation in Congress.

The White House, Justice Department and the Commerce Department, which oversees the Census Bureau and is named as a defendant in the lawsuit, did not immediately respond to NPR’s requests for comment.

This new lawsuit joins an ongoing legal challenge based in Birmingham, Ala., about who counts for congressional apportionment. The state of Alabama filed that suit in 2018 to try to avoid losing a U.S. House seat. It is arguing against the Census Bureau’s long-standing policy of including unauthorized immigrants in the apportionment count.

Attorneys with Mexican American Legal Defense and Educational Fund and Asian Americans Advancing Justice – AAJC are also preparing to challenge Trump’s memo as part of an ongoing federal lawsuit over the administration’s efforts to use government records to produce citizenship data. They are expected to file an amended complaint with the U.S. District Court for the District of Maryland by Aug. 12

“We, unfortunately, anticipated that this kind of lawless memorandum would one day come from this administration,” says Thomas Saenz, MALDEF’s president and general counsel.

In a court filing released Wednesday, Terry Ao Minnis — an attorney who directs census and voting programs at Asian Americans Advancing Justice – AAJC — argued that there is a “close relationship” between the administration’s efforts to produce more detailed data about U.S. citizens and its efforts for a count of unauthorized immigrants. Both come with the “same attendant issues of lack of accuracy and discrimination against Latinos, non-U.S. citizens and those who live near non-U.S. citizens,” Minnis wrote.

During a hearing for that same lawsuit, comments by a Justice Department attorney provided some insight into how far along the administration is in producing data to exclude unauthorized immigrants from the apportionment count.

“We don’t have all the administrative records yet. We haven’t formulated a methodology for how we would do this and things of that nature,” Stephen Ehrlich told U.S. District Judge Paula Xinis of Maryland on Wednesday, adding later a potential need for “some statistical modeling.”

The latest lawsuit filed by Common Cause on Thursday pushes the 2020 census further into a growing political firestorm as the national head count struggles to overcome pandemic-induced delays. It is still unclear whether Congress will grant the Census Bureau’s request for a four-month extension to the current legal deadline of Dec. 31 for delivering the 2020 census apportionment count to the president, as well as the deadline for redistricting data on March 31, 2021.

Since Tuesday’s announcement of Trump’s memo, Democratic lawmakers have been quick to condemn the move.

Rep. Grace Meng, D-N.Y., introduced a bill on Wednesday that would ban using federal funds to “implement, administer, enforce, or carry out” the memo’s directives.

The House Oversight and Reform Committee is planning to hold an emergency hearing on July 29. Commerce Secretary Wilbur Ross, who oversees the bureau, Census Bureau Director Steven Dillingham and the bureau’s chief scientist, John Abowd, have been invited to appear as witnesses, along with three former directors of the agency, according to a statement by the committee’s chair, Rep. Carolyn Maloney, D-N.Y., who said the president’s move “appears to be a blatant attempt to politicize the 2020 Census, depress participation, and undermine its accuracy.”

Minutes after Common Cause issued a press release Thursday announcing their legal challenge, Trump’s reelection campaign sent an email to its supporters soliciting $23 donations by offering “an exact replica” of the pen the president used to sign the memo.

The president’s memo makes no mention of excluding unauthorized immigrants from the census in general, only from the “apportionment base” used to redistribute House seats.

But the campaign’s email described the memo as an “executive order” that was signed to “put America FIRST by blocking illegal aliens from receiving congressional representation and being counted in the U.S. Census.”