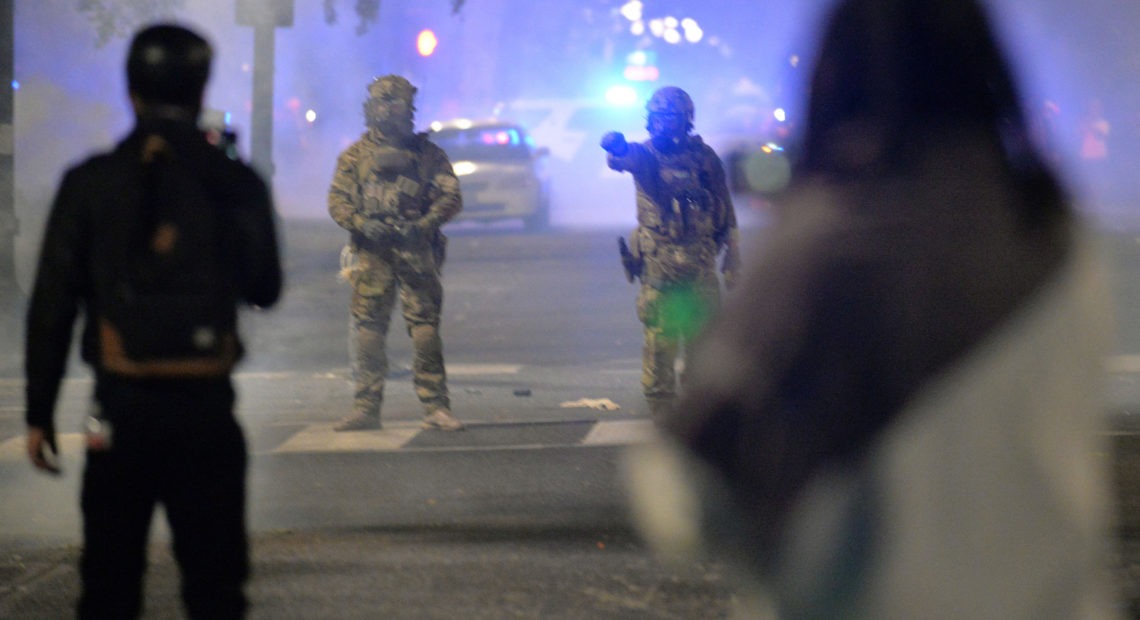 A federal judge on Friday denied the Oregon attorney general’s request for a temporary restraining order against certain actions by federal authorities in Portland, saying the state lacked the legal standing to seek that relief.

Oregon Attorney General Ellen Rosenblum filed a lawsuit on July 17 against the U.S. Department of Homeland Security, the U.S. Marshals Service, U.S. Customs and Border Protection, the Federal Protection Service and their agents. In it, she alleged that federal officers in the city of Portland have acted unlawfully by seizing and detaining Oregonians without probable cause, and she sought a restraining order that would temporarily stop them from using such tactics.

“We are today asking the federal court to stop the federal police from secretly stopping and forcibly grabbing Oregonians off our streets,” Rosenblum wrote in a statement. 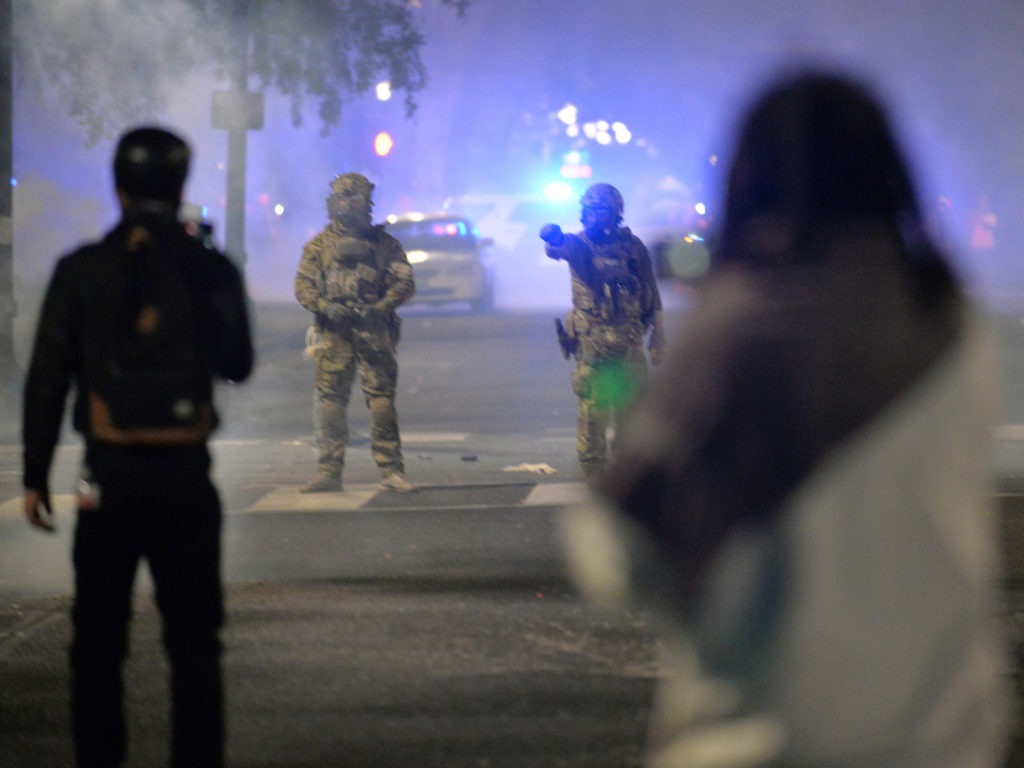 A federal judge has denied Oregon Attorney General Ellen Rosenblum’s request for a temporary restraining order against what she described as unconstitutional tactics by federal officers deployed to protests in Portland. CREDIT: Ankur Dholakia/AFP via Getty Images

The lawsuit specifically asked the judge to require federal officers to identify themselves and their agency before detaining any protesters, explain the basis for making any detentions or arrests and not arrest individuals without a warrant or probable cause.

Mosman wrote that the state would have needed to make a “very particularized showing” in order to prove its standing to bring such a lawsuit.

“Because it has failed to do so — most fundamentally, because it has not shown it is vindicating an interest that is specific to the state itself — I find the State of Oregon lacks standing here and therefore deny its request for a temporary restraining order,” he concluded.

Rosenblum filed the lawsuit in response to what she described as two incidents involving federal authorities “overstepping their powers” and injuring and threatening peaceful protesters in Portland last week.

Protests against racism and police brutality in Portland have grown increasingly tense after the Trump administration deployed federal law enforcement officers to protect federal buildings there earlier this month.

According to Rosenblum, on July 12, a protester standing near the Mark O. Hatfield United States Courthouse was hit in the head with an “impact weapon” and suffered severe injuries. And on July 16, an unmarked minivan with undercover federal agents “wearing generic green military fatigues” grabbed a man off the sidewalk and detained him at the federal courthouse.

Mosman noted that the state presented only two examples as evidence, despite painting a picture in its complaint of “numerous protesters being seized from the streets of Portland by unidentified agents.”

He also said that the state did not present evidence of any official orders or policies behind the seizures, nor any evidence that they are in widespread use.

Mosman noted that it is not unusual for people involved in major protests to allege that police crossed a “constitutional line” in their interactions with protesters, and for some of those people to file lawsuits seeking money damages and injunctive relief.

“There is a well-established body of law paving the way for such lawsuits to move forward in federal court,” he wrote. “This is not such a lawsuit.”

Rosenblum expressed her disappointment with the ruling in a statement issued Friday, saying she believes Oregonians have the right to know who is policing their streets and why peaceful protesters are being detained.

“While I respect Judge Mosman,” she added, “I would ask this question: If the state of Oregon does not have standing to prevent this unconstitutional conduct by unidentified federal agents running roughshod over her citizens, who does? Individuals mistreated by these federal agents can sue for damages, but they can’t get a judge to restrain this unlawful conduct more generally. Today’s ruling suggests that there may be no recourse on behalf of our state, and if so that is extremely troubling.”

As Portland tries to cope with protests and law enforcement response, so does Seattle.

According to the DOJ court filing, the directive was set to take effect at 3 a.m on Saturday. Robart said the temporary restraining order on the directive was “very temporary,” and more discussion was needed, The Seattle Times reports.

The Justice Department argues that implementation of the directive would change police policies and thereby conflict with requirements of the consent decree that the city’s police department has been under since 2012, after a DOJ investigation found a pattern of using excessive force.

In his ruling, Robart writes that his decision does not mean the ordinance will no longer be implemented, but he “seeks a pause” until the directive can be further reviewed under the terms of the consent degree.

The temporary restraining order will expire in 14 days. Robart has ordered the city of Seattle and the Department of Justice to meet to propose a schedule for briefings on a preliminary injunction no later than August 1.

The DOG filing asked the court to prohibit the city of Seattle from making changes to policies covered by the consent decree without first engaging in a designated “review, comment and approval process.” It specifically asked the court to declare that the directive cannot take effect as initially planned.

In mid-June, the Seattle City Council unanimously passed an ordinance banning the acquisition and use of “less lethal tools” that police commonly use to disperse crowds that have turned violent.

Seattle Police Chief Carmen Best confirmed in a letter on Thursday that the ordinance would take effect over the weekend, when several events are set to take place across the city. Acknowledging weeks of peaceful protests, she cited two recent instances of “wide-scale” property destruction and attacks on officers, and said more are to be expected.

In her letter, she warned of the “foreseeable impact” of the ordinance, which she said denies officers access to “tools that have been an essential part of their court-approved tactics.”

Best added that the city council ordinance will create more dangerous circumstances for officers to intervene in violent crowds with the only tools left at their disposal: riot shields and riot batons.

She said that while this troubled her, she is “duty-bound” to follow the ordinance once it is in effect.

The DOJ cited Best’s concerns in its motion seeking to block the directive.

“The Chief of Police has therefore made clear that this Directive … will result in changes to [Seattle Police Department] procedures such that will increase the danger to either the public or officers,” it read. “This is a clear conflict with the Consent Decree and, thus, the United States is likely to succeed on the merits in challenging their adoption.”

On Wednesday, Robart ruled that he would allow the ordinance to take effect over the weekend, but reserved the right to reconsider the matter after attorneys involved submit briefs making their case.