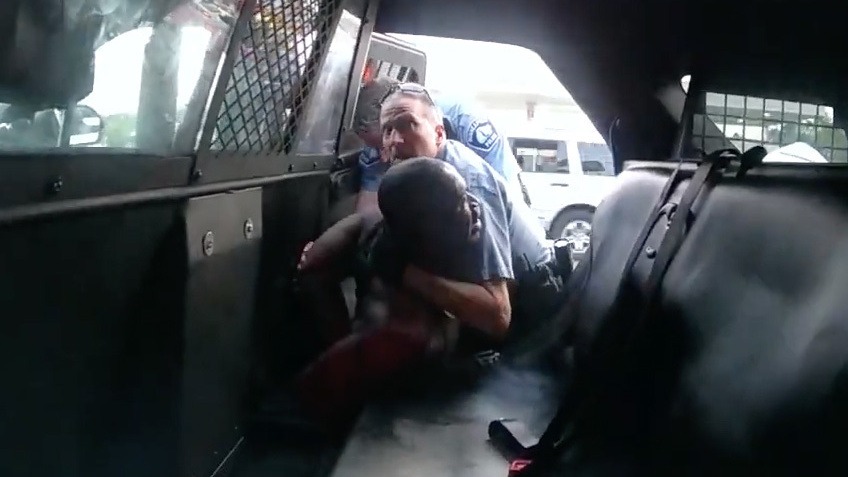 Newly released officer-worn body camera video is giving a fuller view of the tense scene in which George Floyd was killed in Minneapolis on Memorial Day. In it, bystanders clamor for officers to check Floyd’s vital signs as officer Derek Chavin holds his knee on the man’s neck.

The video, from former officer Tou Thao, shows another vantage of Floyd’s arrest, as well as Thao’s interactions with a crowd of bystanders. The recording was released by a judge’s order in Hennepin County, Minn.

In the video, Thao seems to get increasingly agitated as the crowd becomes more vocal, with onlookers repeatedly asking him why Floyd’s vital signs weren’t being checked as other Minneapolis police officers held Floyd, who was handcuffed, on the pavement.

Floyd can be heard pleading with officers for air, including telling them, “I can’t breathe” — the complaint that’s since been repeated by thousands of protesters who are calling for an end to systemic racism and police brutality across the U.S. and internationally.

Minneapolis officer Derek Chauvin is seen struggling to force George Floyd into the back seat of a police SUV, in newly released body camera video recorded by officer Tou Thao. Both Chauvin and Thao were fired, along with two other officers involved in Floyd’s death on Memorial Day. All four former officers are facing charges.
Hennepin County/MPR/YouTube/Screenshot by NPR

At one point, Thao tells the crowd, “This is why you don’t do drugs, kids.”

One bystander, a Black man in a black hoodie and shorts, tells the officers he trained at the police academy. He asks Thao about the tactic Chavin is using, asking if it was a “jiu jutsu move.”

Thao also tells the onlookers that officers tried for 10 minutes to get Floyd in the back of the police vehicle, although the actual time appears to have been less than five.

Thao arrived on the scene after Floyd was cuffed, and as fellow officers Chauvin, Alexander Kueng and Thomas Lane were struggling to place Floyd in the back of a police SUV.

All four officers have since been fired and charged in connection to Floyd’s death. Chauvin faces a second-degree murder charge, while Thao, Alexander and Kueng each face charges of aiding and abetting.

In the video, Thao primarily engages in crowd control as people gather on the sidewalk near the rear of the police vehicle. While it shows Floyd at times, the video largely does not show what happened to Floyd as he was held down on the pavement. Instead, it shows the crowd’s reactions — which range from concern to anger.

Floyd died after Chauvin kneeled on his neck for several minutes. The Minneapolis officers initially confronted Floyd on the suspicion of using a counterfeit $20 bill to purchase cigarettes.

At about the 8:43 mark in the video, the man in the hoodie steps off the sidewalk and into the street, moving toward where Floyd is in the street. Thao yells at the man to get back on the sidewalk.

Moments later, a white woman identifies herself as a Minneapolis firefighter as she approaches Thao and asks if Floyd has a pulse. He yells at her to get back on the sidewalk as well.

Things grow more tense as men and women in the crowd implore the officers to check on Floyd. As they do, some of them shout expletives at the officers.

“He’s f—ing dead bro,” the man in the hoodie shouts, as he steps into the street again.

Thao shoves the man back toward the sidewalk. He had taken out his cellphone to begin recording Floyd laying on the pavement.

“Don’t not touch me again,” Thao yells. People on the sidewalk shout back at Thao that the Black man never touched him.

Thao also pushed, though not as forcefully, a man wearing a white T-shirt, sending him back toward the sidewalk as several people tried to step into the street to get a better view of what was happening to Floyd.

This is the latest officer-worn footage from the Minneapolis incident to be released this week. On Monday, video captured by ex-officers Lane and Kueng was released following a legal challenge by a group of media companies arguing for their public release, as the Star Tribune reports.

The Star Tribune also notes Robert Paule, Thao’s lawyer, filed his clients body camera video to support a motion to get the criminal charges against him dropped.

“Paule has argued in court filings that the case should be dropped because Thao was focused on crowd control and didn’t have a full view of what was happening as three of his former colleagues restrained Floyd, among other reasons,” the paper reports.

Hennepin County District Judge is scheduled to hear oral arguments on motions filed on behalf of Lane and Thao on Sept. 11.