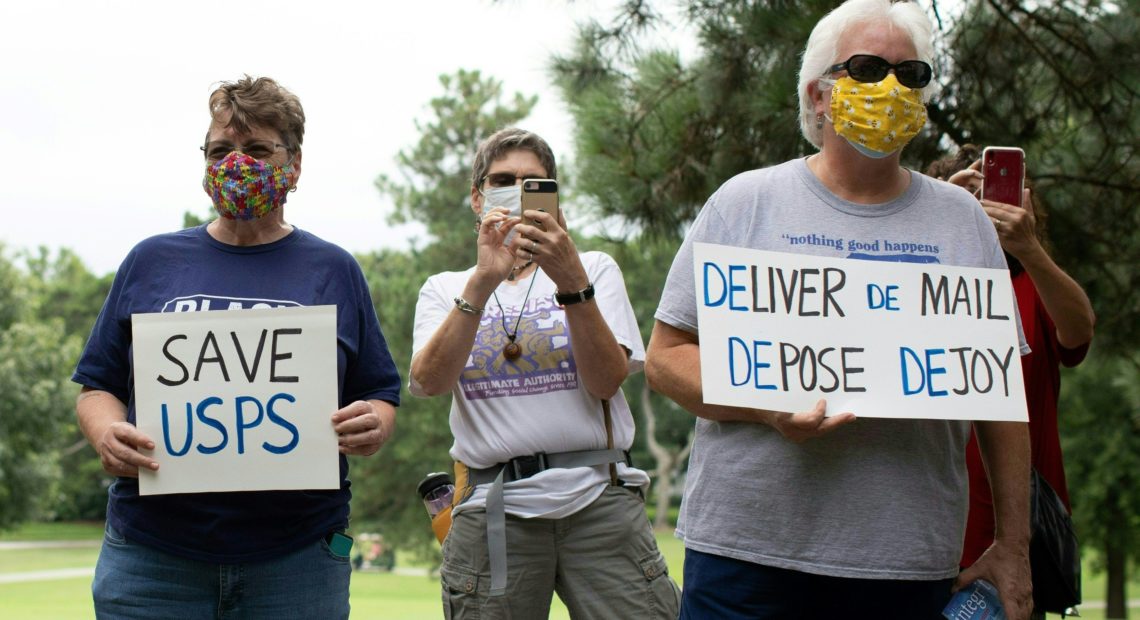 Postmaster General Louis DeJoy has announced he will suspend the controversial changes he instituted to the U.S. Postal Service until after the November election.

“To avoid even the appearance of any impact on election mail, I am suspending these initiatives until after the election is concluded,” DeJoy said in a statement.

He went on to say that between now and Election Day, retail hours at post offices will not change, no mail processing facilities will be closed, mail processing equipment and collection boxes will remain in place and that overtime for workers will be approved when needed.

DeJoy also announced he would “engage standby resources” as of Oct. 1 “to satisfy any unforeseen demand.”

It’s not clear from his statement whether the post office will replace sorting equipment that has already been taken offline or transferred but DeJoy emphasized that existing processing and collection equipment will not be affected until after the election and that the post office will be able to handle the volume of mail expected as many more Americans cast votes by mail this year due to the COVID-19 pandemic.

DeJoy’s statement comes after the news that he will testify Friday before the Senate Committee on Homeland Security and Governmental Affairs.

According to the committee, the hearing will focus on the “finances and operations of the postal service during COVID-19 and upcoming elections.”

DeJoy, an ally of President Trump and major GOP donor, has come under fire in recent weeks for mail delivery problems that have cropped up all over the country following major operational changes he instituted after taking over the service earlier this summer.

Democrats are particularly concerned that the delivery delays could lead to thousands of mail-in ballots being rejected this fall.

Those concerns were amplified last week when Trump indicated to Fox Business Network’s Maria Bartiromo that he opposed Democrats’ proposed boost in funding for the U.S. Postal Service because he wants to make it harder to expand voting by mail.

“They want $25 billion for the post office. Now, they need that money in order to have the post office work so it can take all of these millions and millions of ballots. Now, in the meantime, they aren’t getting there. But if they don’t get those two items, that means you can’t have universal mail-in voting because they’re not equipped to have it,” Trump said.

He later walked those remarks back, claiming his only goal is to ensure the integrity of the Nov. 3 election, although there is no evidence that mail ballot systems lead to the fraud Trump says he’s worried about.

Pressure has been building since DeJoy took command of the Postal Service for him to answer questions about his plans to “implement an organizational realignment” at the agency, his decision to reduce overtime for mail carriers and the removal of high-speed sorting machines.

DeJoy referenced his long-term plans for the agency in his statement Tuesday afternoon, writing, “I came to the Postal Service to make changes to secure the success of this organization and its long-term sustainability. I believe significant reforms are essential to that objective, and work toward those reforms will commence after the election.”

Meanwhile, attorneys general from at least 14 states are filing a federal lawsuit saying the Trump administration violated procedure when changes were made by the postmaster general, claiming DeJoy acted outside his authority to make service cuts by limiting workers’ overtime hours and removing some sorting equipment. The lawsuit says DeJoy should have sought approval from the post office’s regulator, the Postal Regulatory Commission.

“For partisan gain, President Trump is attempting to destroy a critical institution that is essential for millions of Americans,” Washington state Attorney General Bob Ferguson said in a statement.

“We rely on the Postal Service for our Social Security benefits, prescriptions — and exercising our right to vote. Our coalition will fight to protect the Postal Service and uphold the rule of law in federal court,” Ferguson continued.

DeJoy is also scheduled to testify Monday before the House Oversight Committee.

Meanwhile, the AARP, the largest nonpartisan group advocating for Americans 50 and over, has urged DeJoy to suspend any changes to mail delivery operations.

Nancy LeaMond, AARP executive vice president and chief advocacy and engagement officer, told DeJoy in a letter that her group “has become increasingly concerned that recent changes in mail processing operations may be compromising the health and safety of millions of older Americans and may unduly restrict the ability of all Americans to safely participate in the upcoming elections, whether they choose to vote from home or in-person.”

House Democrats plan to return to Washington later this week to vote on legislation that would direct the Postal Service not to implement any changes to service that it had in place on Jan. 1, 2020.

Top Republicans point to the billions of dollars in loans that Congress has already approved for the Postal Service.

But if seniors weigh in with concerns from rural areas — particularly in states with competitive congressional contests — that could force GOP lawmakers to get behind legislation to preserve mail operations.