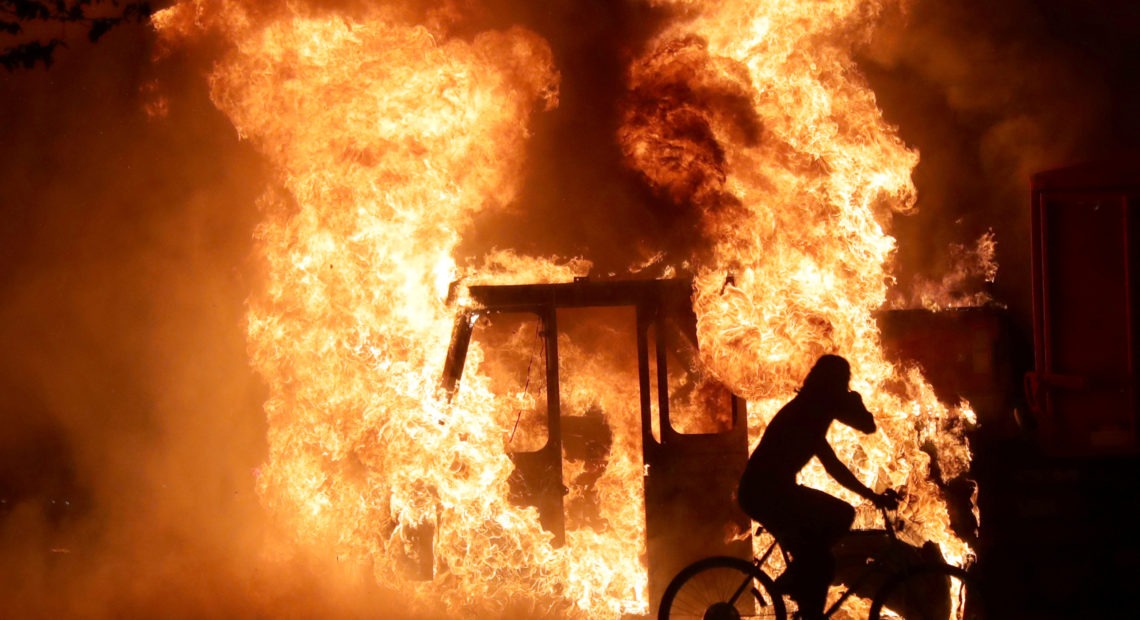 Protests erupted in overnight in Kenosha, Wis., after a Black man was shot several times at close range in the back during an encounter with police. The shooting was caught on video that has since gone viral on social media, sparking outrage.

The man, who has been identified as Jacob Blake, was taken to a Milwaukee hospital. Officials said he was in serious condition.

Wisconsin state officials are investigating the incident and could have findings completed within 30 days.

Joe Biden, the Democratic presidential nominee, issued a statement Monday that included the word “Enough” in white letters set against a black background.

He described Blake as “yet another Black American [who] is a victim of excessive force.”

“These shots pierce the soul of our nation,” Biden said. “Equal justice has not been real for Black Americans and so many others. We are at an inflection point. We must dismantle systemic racism. It is the urgent task before us.”

Officers were responding to a reported domestic incident when the officer-involved shooting took place shortly after 5 p.m. Sunday, according to the Kenosha Police Department.

In a roughly 20-second graphic video posted on social media, a Black man can be seen wearing a white shirt and black shorts. He and officers are standing next to a gray SUV.

The video, which appears to have been recorded from a nearby building across the street, shows the man walking around the front of the vehicle toward the driver’s-side door, where he opens the door.

Confirmed: Jacob Blake’s 3 SONS were IN THE CAR he was getting into when @KenoshaPolice shot him tonight. They saw a cop shoot their father. They will be traumatized forever. We cannot let officers violate their duty to PROTECT us. Our kids deserve better!! #JusticeForJacobBlake

Trailing him are two officers, both with their guns drawn.

Screams can be heard from bystanders. It is unclear what was said between the man and the officers prior to his walking away from them.

“Don’t you do it!” one bystander can be heard yelling repeatedly.

One of the officers trailing the man grabs his shirt with his left hand, in what appears to be an attempt to pull him away from the vehicle. The officer’s service weapon, in his right hand, is pointed inches from the man’s back. 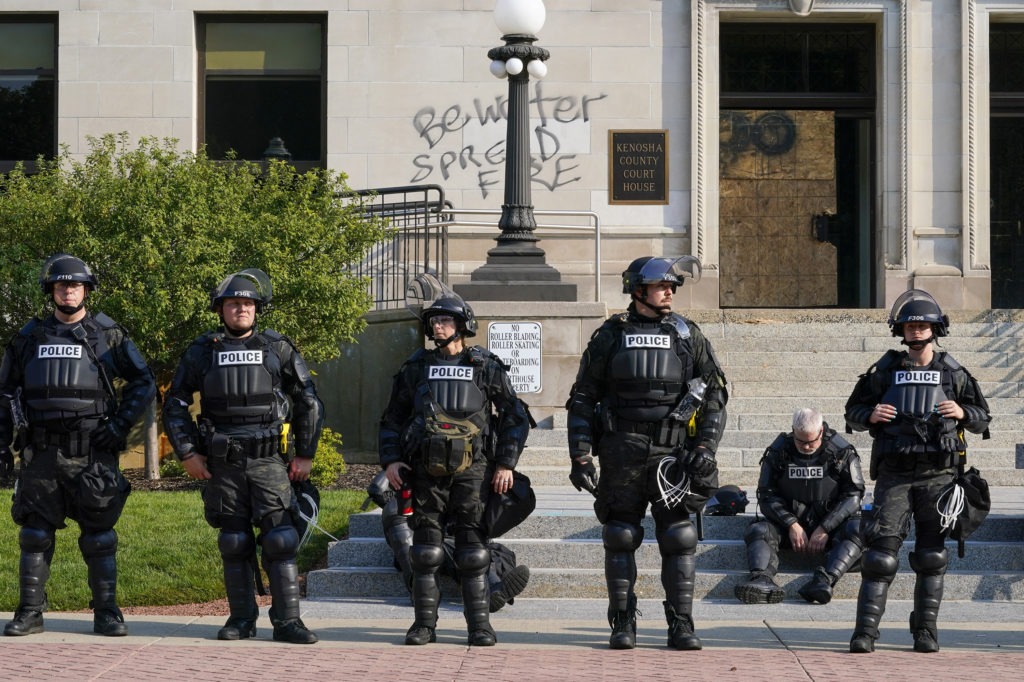 Police in riot gear stand outside the Kenosha County Court House Monday, in Kenosha, Wis. Kenosha police shot a man Sunday evening, setting off unrest in the city after a video appeared to show the officer firing several shots at close range into Jacob Blake back.
CREDIT: Morry Gash/AP

As soon as the man leans inside, the officer appears to shoot, and seven shots ring out.

Moments later, sounds of the vehicle’s horn can be heard, presumably from the man falling into it. A woman can be seen jumping up and down before being pushed away by another officer.

Civil rights attorney Benjamin Crump, who said he has been retained by Blake’s family, also tweeted Sunday that Blake’s children were inside the vehicle when officers shot him.

“Confirmed: Jacob Blake’s 3 SONS were IN THE CAR he was getting into when @KenoshaPolice shot him tonight. They saw a cop shoot their father. They will be traumatized forever. We cannot let officers violate their duty to PROTECT us. Our kids deserve better. #JusticeForJacobBlake”

People at the scene following the shooting said Blake was trying to break up a fight between two women, according to the Kenosha News.

The police department provided few details about what led to the shooting but did say the shooting victim was given immediate aid before being airlifted to Froedtert Hospital in Milwaukee.

Several hours after the shooting, large crowds gathered in Kenosha, located roughly 40 miles south of Milwaukee. According to The Journal Times of Racine, rocks, bricks and at least one Molotov cocktail were thrown.

The newspaper posted video on social media that appears to shows an officer being knocked down by a brick. The paper noted a police vehicle was damaged and later towed away and that tear gas was allegedly used to disperse crowds gathered outside the police station.

Protesters gathered outside the Kenosha County Public Safety Building, chanting “no justice, no peace,” in video posted by Mike De Sisti of the Milwaukee Journal Sentinel. 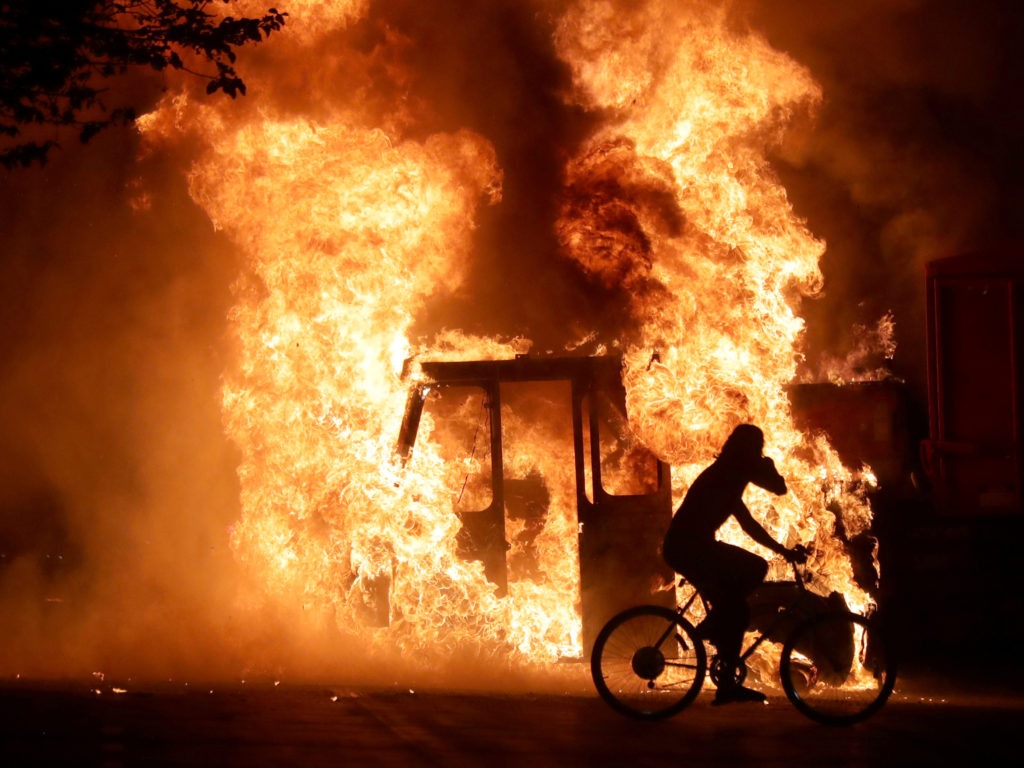 A person on a bike rides past a city truck on fire outside the Kenosha County Courthouse in Kenosha, Wis., during protests following the police shooting of Black man Jacob Blake on Sunday. CREDIT: Mike De Sisti/Milwaukee Journal Sentinel via USA Today/Via Reuters

Reporter Meg Jones of the Journal Sentinel posted video of vehicles on fire near the county courthouse.

Kenosha County officials said the county courthouse and administration building would remain closed Monday because of damage sustained from the unrest. “Court hearings will not be held today, but other county services will remain available online or by phone,” the county said shortly after a countywide 7 a.m. curfew had expired.

Reaction to the shooting

“Tonight, Jacob Blake was shot in the back multiple times, in broad daylight, in Kenosha, Wisconsin,” Gov. Tony Evers, a Democrat, tweeted Sunday. “Kathy and I join his family, friends, and neighbors in hoping earnestly that he will not succumb to his injuries.”

The shooting of the Blake comes nearly three months after another Black man, George Floyd, was killed during an encounter with four Minneapolis police officers on Memorial Day.

Like this latest incident, the Floyd encounter was caught on video and shared widely on social media. It touched off national protests calling for an end to systemic racism and police brutality.

Both of Wisconsin’s U.S. senators weighed in on the incident too.

Sen. Ron Johnson, a Republican, said he supports an investigation into the shooting.

“While emotions are understandably running high in the Kenosha community and elsewhere, I urge any demonstrators to remain peaceful and give our justice system the opportunity to work,” Johnson said in a tweet.

His Democratic counterpart, Sen. Tammy Baldwin, said the video was “terrifying to watch. ”

“As we pray for Jacob Blake to live, let peaceful protests lead the way to the answers we seek, and justice,” Baldwin said in a statement.

The Wisconsin Department of Justice has announced that it is investigating the shooting and is being assisted by the Kenosha County Sheriff’s Office. It added that the officers involved have been placed on administrative leave and are cooperating with investigators.