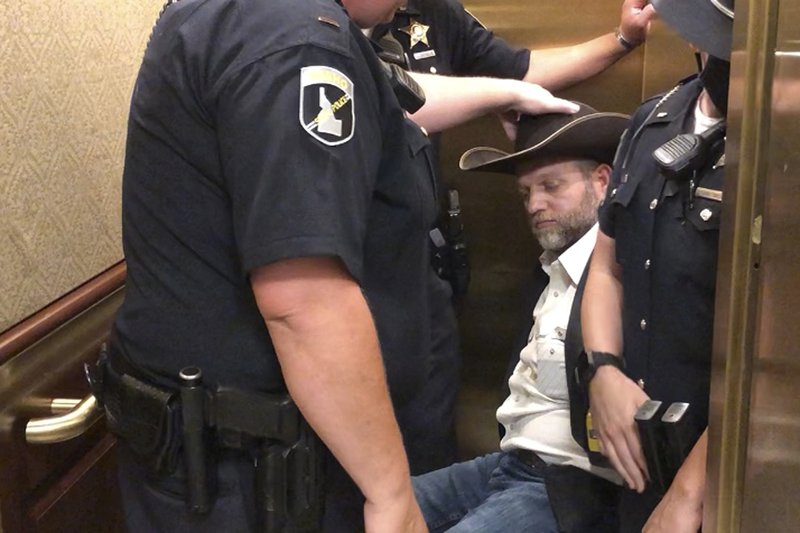 Anti-government activist Ammon Bundy was arrested Wednesday for the second time in two days at the Idaho Statehouse.

Idaho State Police put Bundy in a wheelchair and removed him from the Senate gallery. He did not appear to be injured but didn’t respond to a reporter’s questions as he was wheeled from the Statehouse and through underground tunnels to a police vehicle.

Bundy, who led the 2016 occupation of the Malheur National Wildlife Refuge in Oregon, was arrested Tuesday in a committee room and charged with trespassing and resisting and obstructing officers. During that arrest, he refused to stand and was wheeled out in an office chair.

Idaho State Police say that he’s prohibited from coming to the Statehouse for one year following the Tuesday arrest.

Lawmakers are meeting in a special session called by Republican Gov. Brad little because of the coronavirus, and Wednesday resumed work after two chaotic days.

Lawmakers on Tuesday had to abandon a committee room when a crowd shouted down lawmakers and forced them out. Bundy and his supporters are opposed to proposed legislation that would shield businesses, schools and government entities from liability if someone caught COVID-19.

The incident followed another Monday when angry protesters forced their way into the Idaho House gallery that had limited seating because of the virus, a glass door breaking as protesters jostled with police.

SEE MORE: Coverage Of Idaho Special Session And Protests From BSPR / From IdahoEdNews.org

Authorities on Tuesday arrested anti-government activist Ammon Bundy at the Idaho Statehouse after he refused to leave a meeting room where a few hours earlier angry protesters forced out lawmakers.

Bundy didn’t respond to a reporter’s shouted questions as he was wheeled into an elevator in a chair he apparently refused to get out of. At least two others were also arrested after police cleared the room, and they also refused to follow police commands to leave. Another person was taken into custody earlier in the same room where protesters shouted down lawmakers.

The incident follows another on Monday when angry protesters forced their way into the Idaho House gallery that had limited seating because of the coronavirus pandemic, the window of a glass door getting shattered as protesters jostled with police. Protesters were ultimately let in when Republican House Speaker Scott Bedke stepped in, seeking to avoid violence.

This image taken from video shows anti-government activist Ammon Bundy, rear, being wheeled into an elevator in a chair following his arrest at the Idaho Statehouse in Boise, Idaho, Tuesday, Aug. 25, 2020. Authorities arrested Bundy after he refused to leave a meeting room where a few hours earlier angry protesters forced out lawmakers. CREDIT: Keith Ridler/AP

Lawmakers are meeting in a special session called by Republican Gov. Brad Little because of the coronavirus pandemic. Bundy and other protesters are opposed to a proposed liability law intended to shield schools, businesses and government entities from lawsuits from people who get COVID-19. Some lawmakers also oppose the legislation they say will remove accountability.

Tuesday’s unrest started when the committee chairman, Republican Rep. Greg Chaney, directed two people sitting in an area reserved for credentialed members of the media to leave those seats. Press credentials are controlled by the Capitol Correspondents Association.

“I’m not sure precisely what their goal is, but I’m absolutely sure that the two individuals whom I asked to leave were intending to create a scene,” he said. “At times in the last 24 to 36 hours, this building has descended into complete chaos, and the only way to make sure that all citizens feel comfortable coming here to be heard is to make sure that we don’t allow rule deviations in general.”

The committee considering that legislation left the meeting room as at least a dozen Idaho State Police formed a shield between them and the crowd of more than 100.

Bundy, who led the 2016 occupation of the Malheur National Wildlife Refuge in Oregon, took one of the credentialed media seats after lawmakers left the room. He said police and lawmakers were itching to exert their authority after Monday’s incident. He said he hadn’t instructed anyone to disrupt the meeting, and he challenged those who qualified as a credentialed member of the media.

Bundy and others still sitting in the Lincoln Auditorium. From what I can tell, Bundy hasn’t moved since the earlier hearing changed rooms and the auditorium cleared out. He told me, “I’m just gonna sit here.” #idpol #idleg pic.twitter.com/6sISy1kdxg

The committee convened later in the day in a different room with heavy security and approved a public hearing for the liability legislation.

Meanwhile, another committee earlier in the day killed legislation intended to allow greater opportunity for in-person voting for the Nov. 3 general election amid the coronavirus pandemic.

The House State Affairs Committee voted 10-5 to kill the legislation that was a primary reason Republican Gov. Brad Little called the part-time Legislature back for a special session.

The legislation would have allowed counties to create voting centers where residents from different precincts could vote. Elections officials say they are facing a shortage of poll workers and potentially polling sites in November because of the pandemic.