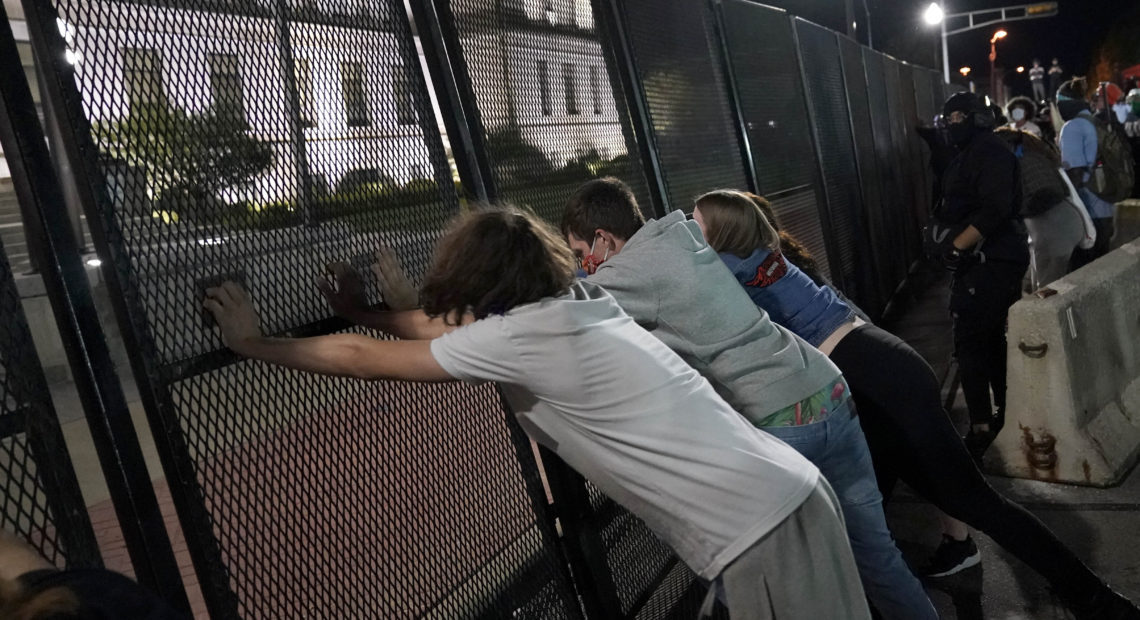 An Illinois teenager has been arrested in connection with a deadly shooting Tuesday in Kenosha, Wis., during the third consecutive night of protests following the police shooting of a Black resident.

Kyle Rittenhouse, a white male teenager, has been charged with first-degree intentional homicide and was taken into custody by police in Antioch, Ill., about 15 miles southwest of Kenosha.

“Last night a 17-year-old individual from Antioch, Ill., was involved in the use of firearms … to resolve whatever conflict was in place,” Kenosha Police Chief Daniel Miskinis said during a Wednesday press briefing.

“The result of it was two people are dead.”

He said two Kenosha-area residents, one 26 years old and another who was 36, were killed. A third person was injured but was expected to survive.

Officials said the investigation is ongoing. The names of the victims were not released. The shooting took place just before midnight, according to a police statement released earlier Wednesday.

Miskinis said it is unclear at this point what led to the suspect using deadly force but said that all the people involved were out beyond the 8 p.m. curfew in place Tuesday.

Officials announced the curfew would be moved up an hour to 7 p.m. local time and that it would be extended through Sunday.

“The curfew is in place to protect,” Miskinis said. “Had persons not been out in violation of that, perhaps the situation that unfolded would not have happened.”

At the time of the briefing the suspect was in the custody of the Lake County judicial system pending an extradition hearing to transfer custody from Illinois to Wisconsin, according to Antioch police.

“Our Village of Antioch is deeply saddened by all loss of life. Our hearts and prayers extend to the friends and family who lost a loved one,” Antioch Mayor Lawrence Hanson said in a statement.

Earlier Wednesday, Kenosha County Sheriff David Beth told the Milwaukee Journal Sentinel one of the victims suffered a gunshot wound to the head. Another victim was shot in the chest; however, Beth said he was unsure where the third victim was shot.

Three people were shot, two fatally, during protests in Kenosha, Wis., overnight as demonstrators took to the streets for a third consecutive night to protest the police shooting of a Black resident, Jacob Blake.

Kenosha Police Department released few details early Wednesday, but confirmed two people had been shot and killed, while a third person suffered non-life threatening injuries, according to a statement.

Officials said the investigation is ongoing and that the names, ages and cities of the victims’ residences were still being determined. Police said the shooting took place just before midnight. 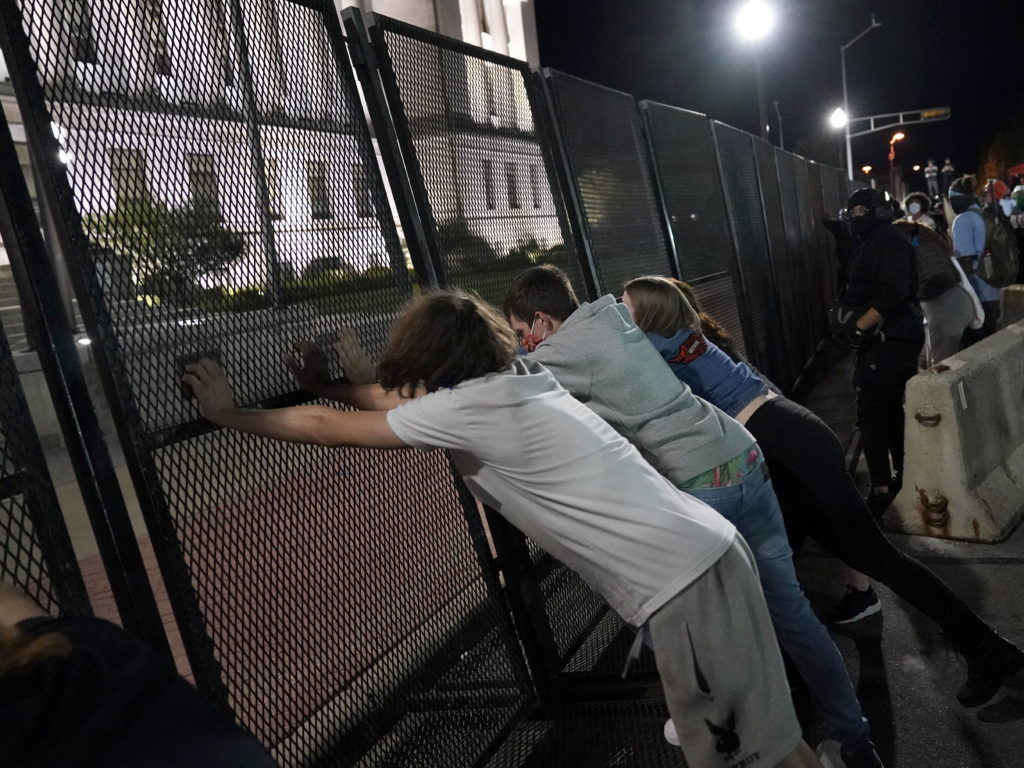 Kenosha County Sheriff David Beth told the Milwaukee Journal-Sentinel one of the victims suffered a gunshot wound to the head. Another victim was shot in the chest, however he was unsure where the third victim was shot.

He also told the paper he believed at least one person would be taken in to custody soon based on video police had seen.

Beth also told the Kenosha News both the Kenosha Police and the FBI are investigating the incident.

The newspaper also reports that both a shooter and one of the fatalities were white males and that “dozens of shots were heard” at the protest site. It notes there were earlier scuffles between Black Lives Matter supporters and armed individuals that did not lead to gunfire earlier in the night.

One video posted to social media shows a chaotic scene where multiple gunshots can be heard. In it, a man is jogging down the middle of a street carrying a long gun.

A person can be heard on the video asking, “What he do?”

“He shot someone,” another person answers.

Moments later, the man with the gun falls to the ground, someone yells “Get his a**!”

The man then turns on his backside and hoists the gun as people approach him, seemingly to apprehend him, before he opens fire.

The man then appears to start shooting at the people around him.

One man is shot at close range, stumbles off and falls to the ground. A second man appears to be shot in the arm or shoulder and retreats.

“Medic! Medic!” are heard being shouted on the video.

Later in the footage, the gunman approaches law enforcement with his arms raised above his head, but no one stops or apprehends him before the video cuts off.

In a statement Tuesday released prior to the shooting, the Kenosha Sheriff’s Department said it was bracing for “what will likely be another very challenging night in Kenosha County.” It also reminded residents of the curfew that was in effect from 8 p.m. to 7 a.m. local time.

Earlier in the day, Gov. Tony Evers (D) declared a state of emergency for the state and ordered additional Wisconsin National Guard troops to assist local law enforcement agencies, bringing to 250 the number of troops deployed to the city.

Days of protests were sparked in Kenosha, a city of 100,000 people about 30 miles south of Milwaukee, after a video posted on social media went viral showing Blake being shot multiple times in the back by police as he leaned into a gray SUV. Blake’s three young sons were in the vehicle when he was shot. 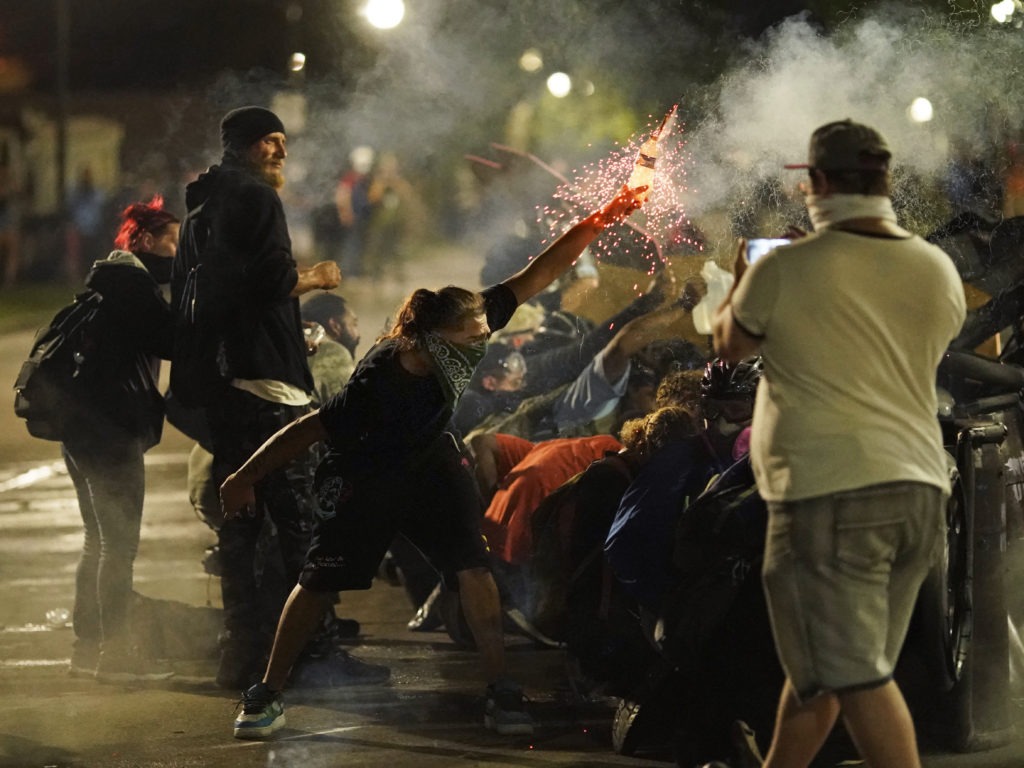 A protester thrusts an object toward police during clashes outside the courthouse late Tuesday during the third night of unrest in the city. CREDIT: David Goldman/AP

The family’s attorney Benjamin Crump addressed the media on Tuesday afternoon, confirming that Blake was paralyzed from the waist down. He noted that at the time of the press conference Blake was in another surgery and said “it’s going to take a miracle” for him to walk again.

Another attorney for the family, Patrick Salvi, shared vivid details of the extent of Blake’s injuries, including a bullet that went through some or all of his spinal cord and damaged his kidney and liver. Blake also was shot in the arm, had holes in his stomach, and had to have the majority of his colon and small intestine removed, Salvi said.

On Monday the Wisconsin Department of Justice said that it was investigating the shooting of Blake and that it was being assisted by the Kenosha County Sheriff’s Department.

The officers involved in the Blake shooting have not been identified, but officials said they have been placed on administrative leave and are cooperating with the investigation.