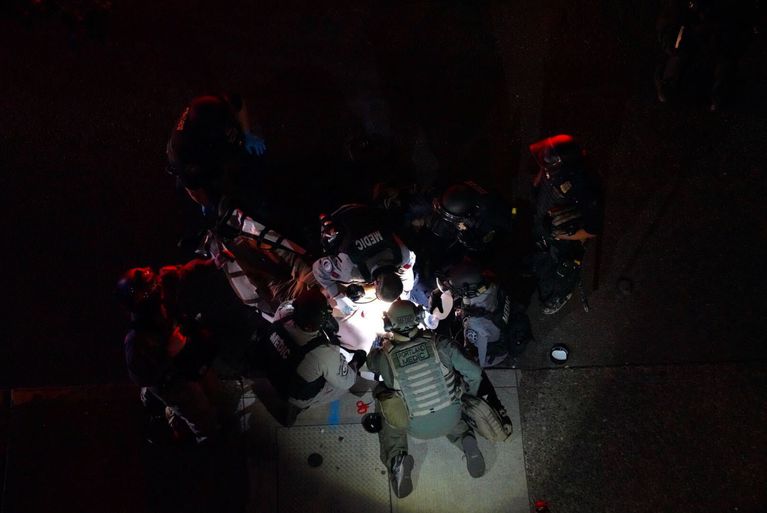 A person was shot and killed in downtown Portland Saturday night as a pro-Trump car caravan wound its way through city streets, clashing with counterprotesters along the way. It is uncertain whether the shooting is directly connected to the competing protests, but what became clear late Saturday night was that it likely soon will be.

Images from the scene show a man wearing a hat featuring the logo of Patriot Prayer, a group that has regularly attended, hosted and engaged in violence at Portland protests through the years. The man was also wearing a “Thin Blue Line” patch on his shorts, indicating support for the police.

The shooting occurred around 8:45 p.m. near the corner of Southwest Third Avenue and Alder Street. Portland police are investigating it as a homicide.

Police secured the entire block as a crime scene and did not release suspect information Saturday night. No one was immediately arrested following the shooting.

Portland Mayor Ted Wheeler said that he intends to address the situation at a press conference at noon Sunday.

“Will be transparent with the public,” Wheeler said in a text message to OPB. “Asking for people to remain calm and not add to this tragedy.”

The shooting is a grim marker on the ever-growing and ever-more-complex timeline of Portland protests over the past several months. Anti-racist demonstrators have hit the streets to speak out against police brutality and systemic racism every night since Minneapolis police killed George Floyd in late May.

Far-right protesters had remained largely absent from those demonstrations — until the past couple weeks.

Tension has gradually ratcheted up in Portland since last weekend, when groups like the Proud Boys, a self-described “western chauvinist” group that has regularly engaged in violence at Portland protests, showed up to counter protesters demanding police reform. Protests last Saturday devolved into brawls. One pro-police demonstrator pulled a gun at one point and then attended another rally in Gresham later in the week, armed.

A rally for Trump

The lead-up to Saturday’s “Trump cruise rally” generated fear of yet more violence from both sides. A post pinned to the Facebook event page, which drew some 2,500 attendees, discouraged people from openly carrying firearms and instead encouraged concealed carry. 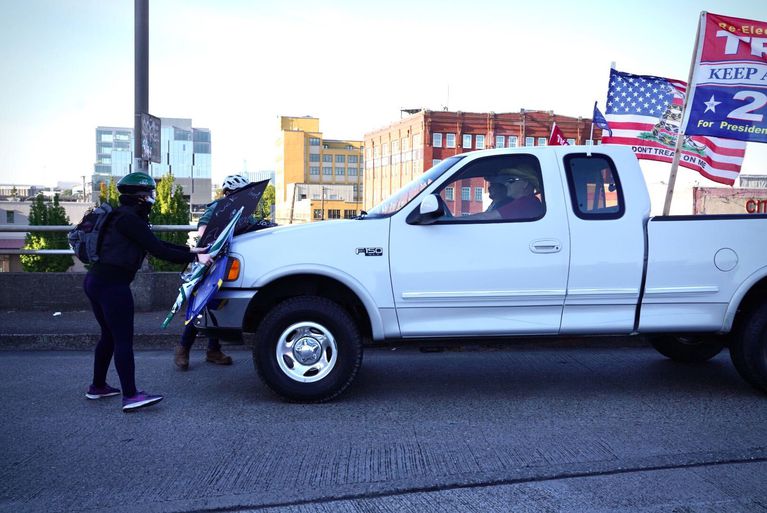 A driver of a truck faces off with counterprotesters at a pro-Trump caravan through Portland, Ore., Aug. 29, 2020. CREDIT: Jonathan Levinson / OPB

In his speech accepting the Republican nomination for president, Donald Trump stoked fear around anti-racist protests and protesters in Portland, saying a Joe Biden administration would “make every city look like Democrat-run Portland, Oregon. No one will be safe in Biden’s America.”

Energized, thousands of Trump supporters gathered Saturday afternoon at the Clackamas Town Center mall, from which they drove to Portland where a clash with anti-racist demonstrators seemed certain to await.

“I know for the most part, everyone here is gonna be pretty civilized. We’re all gonna support the president in safe way,” said Brandon Beck, who was attending his first Trump rally. “Obviously we’re all gonna be in cars, none of us are gonna be burning, looting, or anything. We’re just trying to have fun and stay safe today.”

For Joe Reminar, he said Saturday’s event was the fifth or sixth Trump rally he’d attended. “Today is about freedom and showing that antifa doesn’t have the full chokehold on Portland and that we’re taxpaying citizens and we don’t want shit tore up,” he said.

“We’re gonna be a major parade and showing strength for our president. Which we appreciate all that he’s done, keeping the economy going, fighting China on this virus, keeping us free and saving our Second Amendment.”

Clackamas County Sheriff’s Office vehicles blocked intersections around the mall to allow the parade of vehicles to pass through, but officials told OPB they were not providing an escort for the group. Multiple Oregon state troopers were positioned along Highway 224, the pro-Trump caravan’s primary route to Portland.

A map of the intended route shared and spread across social media kept the caravan on highways and out of downtown. In a highly predictable turn of events, many cars rerouted into downtown just before 7 p.m. Confrontations grew more heated from there.

Videos posted online show people in flag-adorned trucks driving through groups of protesters, firing paintball guns at crowds and deploying what appears to be pepper spray. Individual cars or groups of counterdemonstrators tried to break the caravan’s steady stream, blocking them with vehicles and bodies, which sometimes led to dangerous, tense confrontations.

The shooting happened shortly thereafter, bringing the 93rd day of protest in Portland to a gruesome conclusion.