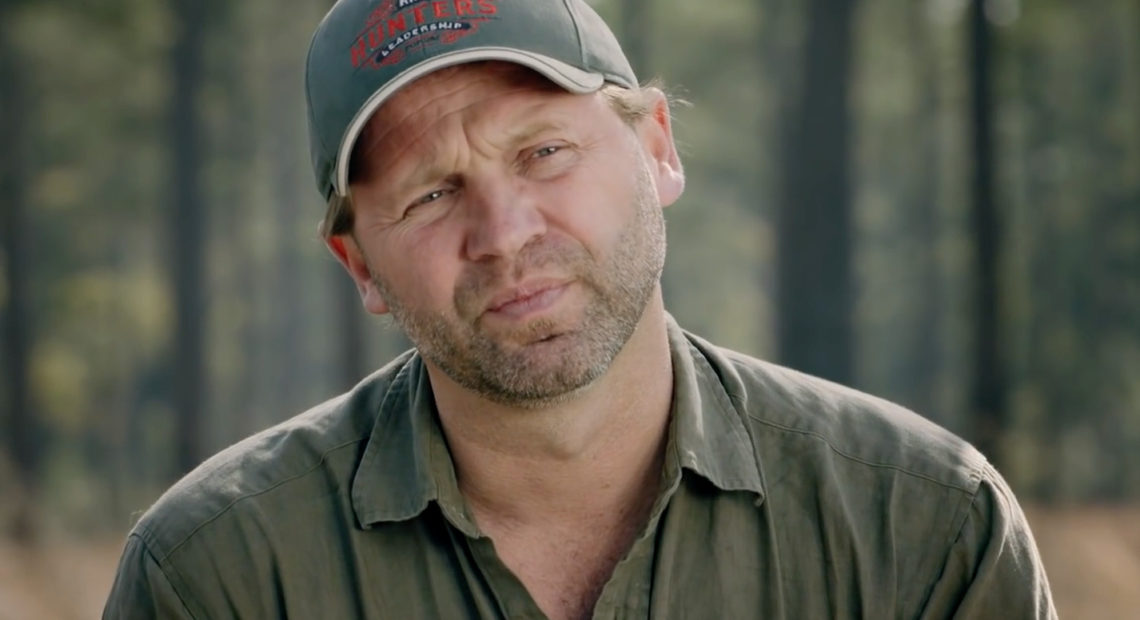 When the NRA opened its annual convention in Dallas in 2018, only a few months had passed since the deadly school shooting in Parkland, Florida.

Seventeen students and teachers were dead and more than a dozen others grievously wounded.

I had been in Parkland for NPR talking with shattered young survivors who were organizing, hoping to finally shift America’s debate over guns and gun violence. But when I went to Dallas, it seemed nothing had changed. 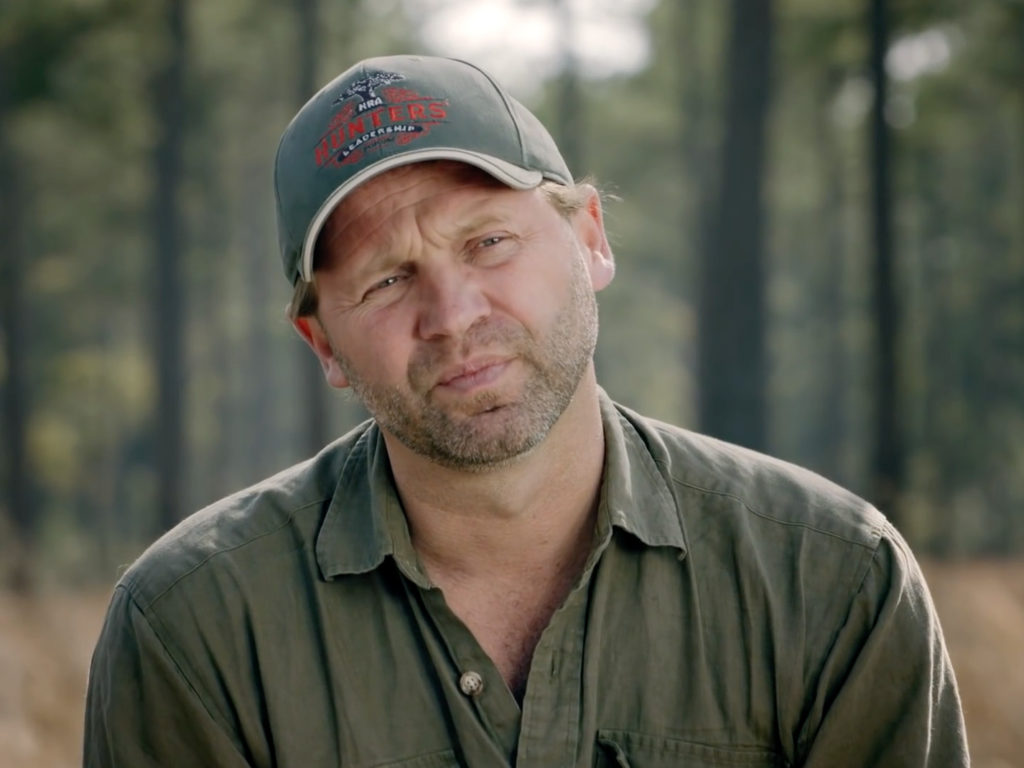 Joshua Powell appears in “Trust the Hunter in Your Blood,” an NRA fundraising film on YouTube.
CREDIT: YouTube

The convention was packed with men and women (and firearm dealers) committed to a gun culture unfettered by regulation or government oversight. The NRA’s long-time leader Wayne LaPierre (who once described federal law enforcement agents as “jack-booted government thugs”) appeared on stage grinning and waving.

In a sign of the organization’s clout, the headliners were none other than President Donald Trump and Vice President Mike Pence.

“Your Second Amendment rights are under siege, but they will never ever be under siege as long as I am president,” Trump told a thrilled crowd.

It turns out it was all a façade, a kind of last, high-caliber hurrah before the NRA began its sudden and very public unraveling. That’s according to Josh Powell, who at the time was the organization’s second-in-command.

“The NRA is in a pretty bad death spiral right now and those are very hard to turn around,” Powell told NPR in an interview Thursday.

By the spring of 2018, as Powell writes in his new tell-all Inside the NRA, the organization’s power was already fading fast. Donations had plummeted. Gun control groups were on track to outspend the NRA in the mid-term elections.

Behind the scenes, one of America’s most powerful conservative organizations had fallen into what Powell now describes as a morass of greed, in-fighting and paranoia.

“The finances of the NRA are in shambles,” Powell writes, portraying the 148-year-old gun-rights group as part of “the grifter culture of Conservative Inc.”

He accuses LaPierre in particular, his former boss and mentor, of “robbing every $45-dues-paying member to cover the costs of his own extravagance and his shameful mismanagement.” 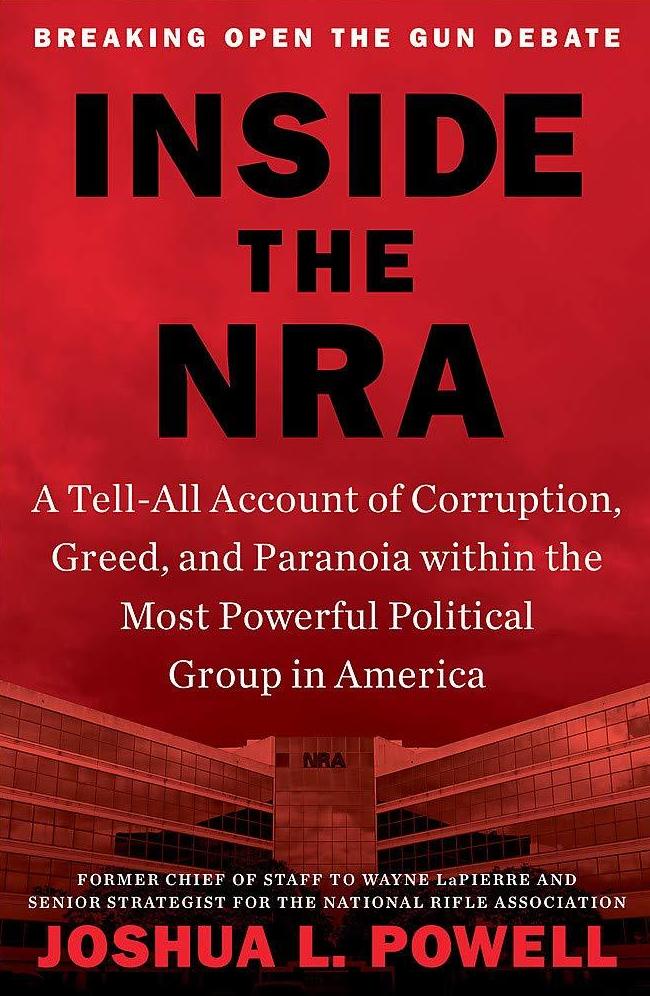 Inside the NRA: A Tell-All Account of Corruption, Greed, and Paranoia within the Most Powerful Political Group in America, by Joshua Powell
Twelve

In a statement sent to NPR, the NRA dismissed Powell as a marginal figure in the organization who was ousted for “misappropriation of funds.”

“This is a fictional account of the NRA, period,” said spokesman Andrew Arulanandam. “Mr. Powell was effusive in his praise of NRA leadership and the Association’s mission – right up until the day he was fired.”

But if there’s a big reveal in Powell’s book, it’s likely not — as he suggests — that as a former top executive at the NRA, he now supports modest gun control laws. That includes universal background checks for all gun sales and “red flag” laws designed to keep firearms away from individuals deemed a risk.

Instead, the big moments in the book come when Powell offers confirmation of many of the harshest criticisms leveled against the NRA.

He suggests that after joining the organization’s staff in 2016 he found “graft” was endemic to the culture. He compares his own behavior, and that of fellow executives, to cinema gangsters.

“I felt like Ray Liotta walking into the Copacabana in the movie Goodfellas,” Powell writes. “That is the seduction of living the life, and it’s easy to forget the little guy with his $45 membership dues who is paying the bill.”

Speaking with NPR, he acknowledged being swept up in the glamour and power that came with an $850,000-a-year job that gave him access to the White House and to Republican leaders in Congress.

“I’m not the hero of this story, but I’m definitely not the villain,” he said.

But Powell himself is no stranger to allegations of self-dealing and improper conduct.

He left the NRA last year facing sexual harassment complaints and claims he improperly billed the organization for personal expenses. (In his book, Powell says he repaid more than $20,000.)

He’s also one of four men named personally (along with LaPierre) in a lawsuit filed against the NRA last month by New York Attorney General Letitia James, who is seeking to dissolve the organization.

James alleges there is evidence of “illegal conduct and inappropriate spending” by Powell that includes concealing a sweetheart consulting deal that paid his wife roughly $30,000 a month.

In his book, Powell writes he “began asking myself: Who was more corrupt, me or Wayne?” But speaking with NPR, he maintained he did nothing illegal and left when he realized financial reforms were being blocked by the gun group’s leaders.

“In essence we were sweeping under the rug 30 years of corruption and not fixing the place,” he said.

The NRA has denied any wrongdoing and maintains its legal troubles are the result of a political vendetta.

In a statement, NRA President Carolyn Meadows described New York’s lawsuit as a “baseless premeditated attack on our organization and the Second Amendment freedom it fights to defend.”

But Powell also reveals — perhaps more starkly than he intends — the tone-deafness that pervaded the NRA’s leadership as a new era of deadly school shootings began to horrify the nation.

In 2012, the Sandy Hook shooting left 26 young children and teachers dead in Newtown, Conn. Powell, who wasn’t yet on staff at the time, says he watched as the gun-rights group and its allies scrambled to oppose new regulations.

“The intensity, the rush of going into crisis mode, was oddly intoxicating,” Powell writes. “The day would be a slurry of death, politics, guns, and money, and like it or not, I had a front-row seat.”

Later, in the first sentence of his chapter on the Parkland shooting, Powell describes the horror of that day as follows: “On the afternoon of February 14 2018 the NRA’s world was upended.”

Powell does occasionally wrestle with his own place in the gun-rights movement and told NPR he feels “remorse” for many of his actions.

In the book, he describes the NRA’s messaging as a form of extremism that contributed to the radicalization of millions of gun owners. (Powell now labels many of the NRA’s most fervent supporters “bump stock crazies.”)

But Powell offers no evidence he pushed for changes to the NRA’s militant tone, or advocated for even modest gun-control efforts, while he worked for the organization.

He acknowledges staying silent even when language he saw as dangerous (“gasoline on the fire”) was used to drive donations.

Now on the outside, Powell says the NRA needs sweeping reforms in order to survive, including the departure of LaPierre, who has so far held onto his leadership post.

But in the end, Powell himself didn’t leave the organization after Parkland or the Las Vegas mass shooting or any of the other slaughters carried out with firearms during his tenure at the NRA.

He departed, like Ray Liotta in Goodfellas, only when the good times seemed to be over and the bill was coming due.