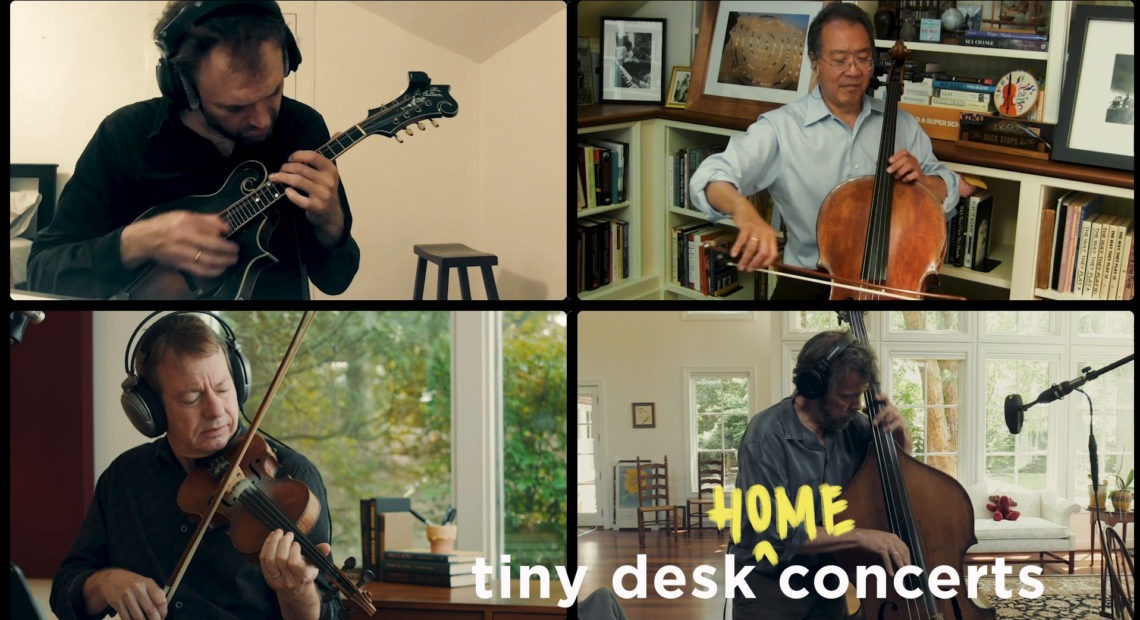 Yo-Yo Ma, arguably the best known cellist in the world, assembled the world-class musical ensemble known as Goat Rodeo nearly 10 years ago. You’ve probably heard Stuart Duncan playing fiddle on albums with Dolly Parton, Robert Plant and Alison Krauss, and he was named the Academy of Country Music Fiddle Player of the Year numerous times. Edgar Meyer has played bass with Joshua Bell, Béla Fleck and Christian McBride, and the Nashville Symphony commissioned his first orchestral work in 2017. And you’d most likely recognize Chris Thile‘s vocals and mandolin in the music of Nickel Creek and Punch Brothers.

The four musicians played Bob Boilen’s desk as Goat Rodeo in 2011. Fast forward a decade and this collaboration channels that same spectacular frenzy, separately captured in the gorgeous homes of the artists and mixed to perfection. As the audio engineer for Tiny Desk, I don’t have a favorite (home) concert yet, but the very first few seconds of this performance sent chills up my spine.

Not Our First Goat Rodeo (listen here) is the second album in nine years from the ultimate jam band, and it’s just as spontaneous and joyful to listen to as their first, The Goat Rodeo Sessions. All four musicians are credited as composers. They’re accompanied by songwriter Aoife O’Donovan, who lends her pitch-perfect vocals to close out the set. Chris Thile, the master of ceremonies for this Tiny Desk (home) concert, explains that “The Trappings” is about work/life balance, a timely sentiment.