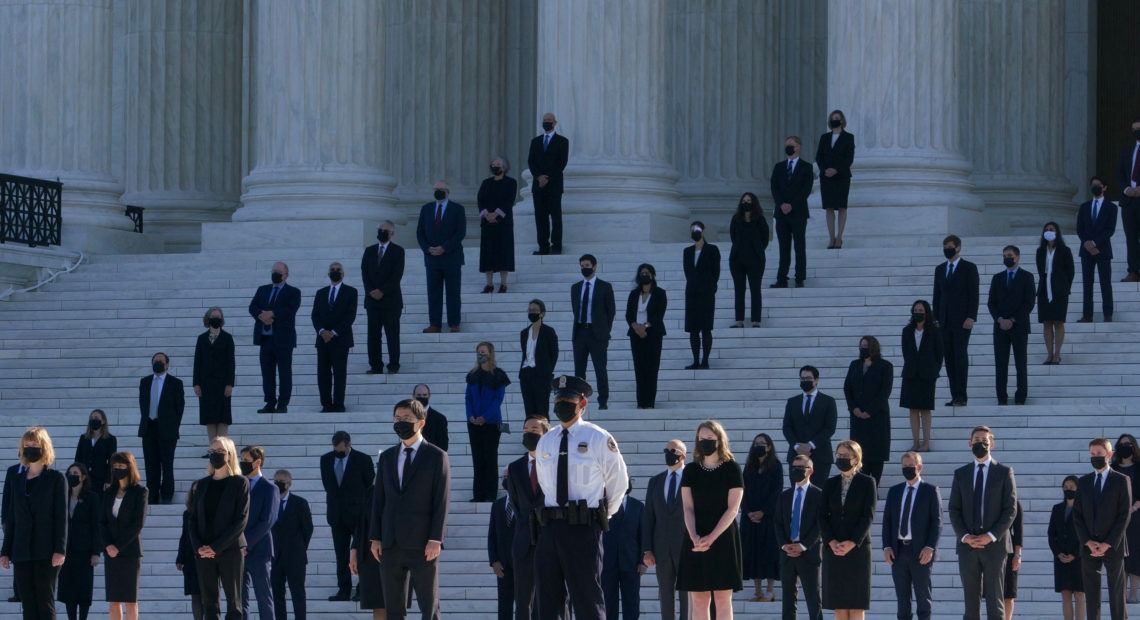 Justice Ruth Bader Ginsburg is lying in repose at the U.S. Supreme Court on Wednesday and Thursday, a two-day event honoring a justice who was both a cultural and legal icon.

As Ginsburg’s casket arrived at the high court, former law clerks lined the Supreme Court steps. Supreme Court police officers served as pallbearers. Then the justice’s family, close friends and members of the court held a brief ceremony in the court’s Great Hall.

Rabbi Lauren Holtzblatt eulogized Ginsburg as a “path-marking role model for women and girls of all ages, who now know that no office is out of reach for their dreams, whether that is to serve the highest court of our land or closer to home for me as the rabbi of their community.”

Rabbi Holtzblatt, whose husband served as a law clerk for Ginsburg, said the justice’s life’s work was “to insist that the Constitution deliver on its promise, that we the people would include all the people. She carried out that work in every chapter of her life.”

Chief Justice John Roberts said that Ginsburg’s life “was one of the many versions of the American dream.”

“Ruth used to ask, ‘What is the difference between a bookkeeper in Brooklyn and a Supreme Court justice?’ Her answer: one generation,” he said. 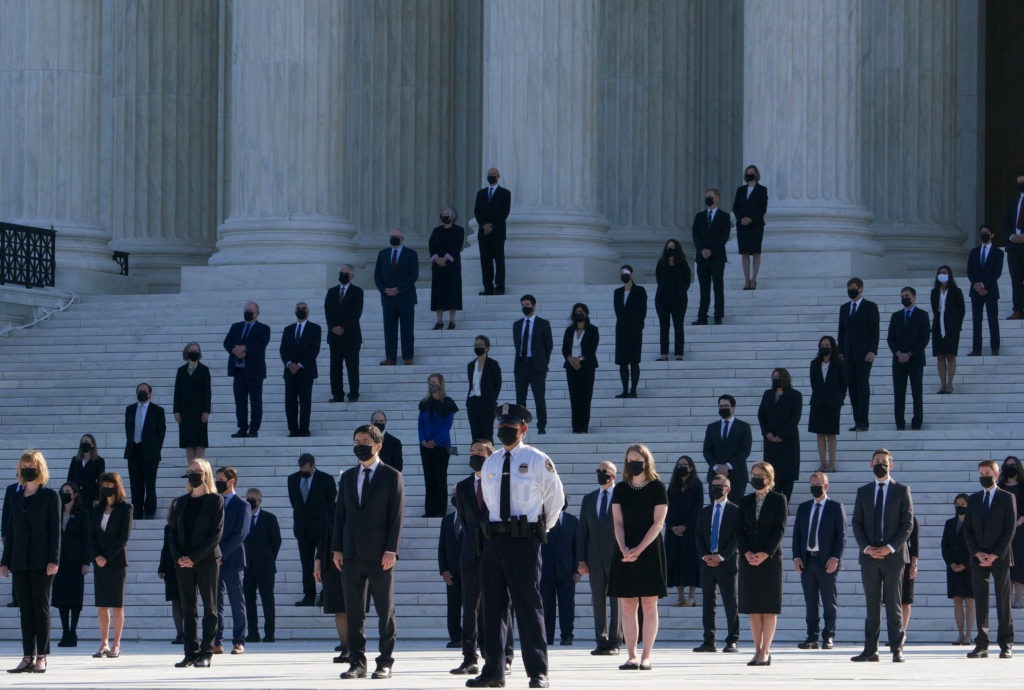 Former law clerks for Justice Ruth Bader Ginsburg stand on the steps of the U.S. Supreme Court in Washington, D.C., as they await the arrival of the casket on Wednesday.
CREDIT: Claire Harbage/NPR

Roberts noted that Ginsburg said she wanted to be an opera virtuoso “but became a rock star instead.”

“She found her stage right behind me in our courtroom. There she won famous victories that helped move our nation closer to equal justice under law,” he said, “to the extent that women are now a majority in law schools, not simply a handful.”

Ginsburg’s 483 majority, concurring, and dissenting opinions “will steer the court for decades,” he said.

After the ceremony, Ginsburg’s casket was moved under the portico at the top of the front steps of the Supreme Court building for members of the public to pay respects. The court said public viewing would be allowed from 11 a.m. ET until 10 p.m. on Wednesday and from 9 a.m. until 10 p.m. on Thursday.

The White House announced Wednesday morning that President Trump will pay his respects to the late justice on Thursday at the court. On Friday, Ginsburg will become the first woman to lie in state at the U.S. Capitol, an honor reserved for Americans considered to have lived a life of distinguished service to the nation.

Ginsburg’s death last week, less than 50 days before the election, raised near-immediate political questions over whether Republicans could — or should — confirm a new justice during an election year.

When Justice Antonin Scalia died unexpectedly in 2016, nearly nine months ahead of that year’s general election, Republicans successfully blocked then-President Barack Obama’s nomination of a justice to the court, citing the proximity to the election.

Now, however, Senate Majority Leader Mitch McConnell, R-Ky., argues that voters who put Republicans in power in both the White House and Senate have endorsed the GOP judicial agenda. And it appears his party members agree.

Ginsburg’s vacant seat would be President Trump’s third nomination to the high court. The confirmation of an additional conservative justice would likely have generations-long implications for the court — and its opinions on a range of issues.

Trump has said he will announce his nominee to the court, promising to select a woman, on Saturday.