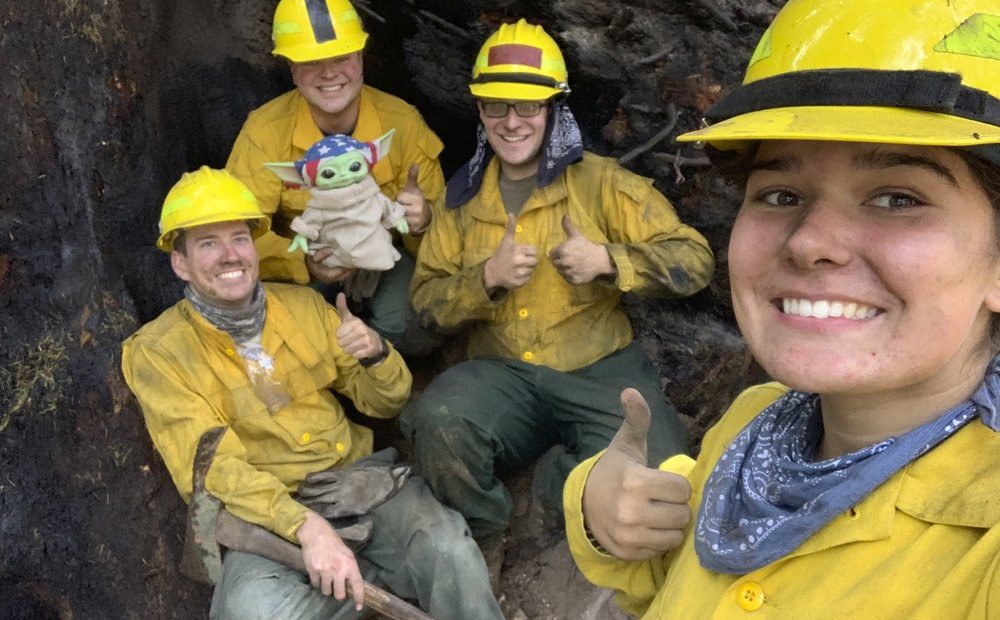 Beleaguered firefighters in the western United States have a new force on their side: Baby Yoda.

A 5-year-old Oregon boy and his grandmother delivered a toy version of the pointy-eared Force user to a donation center for firefighters on Sept. 12 along with a note that read: “Here is a friend for you in case you get lonely.” Since then, Baby Yoda has been to four wildfires in two states, ridden in helicopters, checked people’s temperatures for COVID-19 symptoms, and even used “the Force” to move a firefighting tool known as a pulaski.

A Facebook page called “Baby Yoda fights fires” has been documenting his journey and spreading joy far beyond the fire lines. More than 30,000 people and counting are following the page as he travels from crew to crew.

“It’s a miracle how one small gesture can create a wave of kindness,” said Sasha Tinning, the 54-year-old Scappoose, Oregon, woman who spotted Baby Yoda while shopping for items to donate to the firefighters with her grandson, Carver. 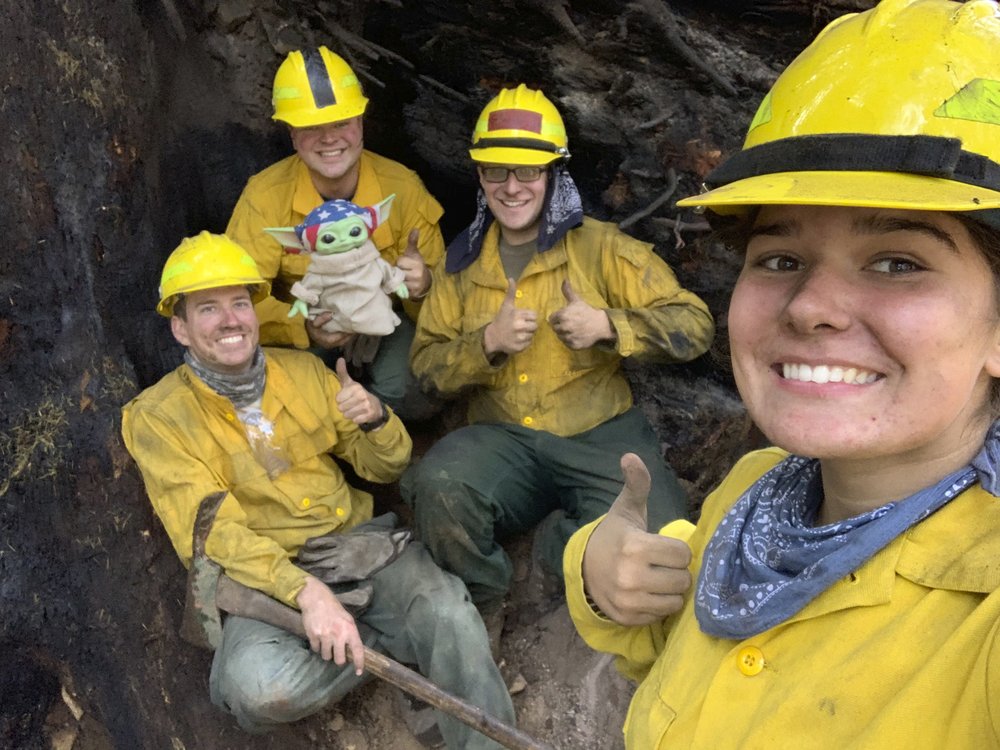 Lucas Galloway, from left, Jaebyn Drake, Rhett Schieder and Audrey Wilcox pose for a selfie with Baby Yoda on Sept. 20, 2020, while fighting the Holiday Farm Fire in Blue River, Oregon. In early September, a 5-year-old Oregon boy named Carver and his grandmother delivered a toy version of “The Mandalorian” character to a donation center for firefighters. Courtesy of Audrey Wilcox via AP

“I turn around and this Baby Yoda is just looking right at me and he was a darn cute little fella,” Tinning said. “I said, ‘Hey, this looks neat, maybe we should take this to the firefighters.’”

That’s when Carver chimed in. “He said they could have a friend, and I thought everyone needs a friend, especially now,” Tinning said. She wrote a note with the sentiment to firefighters and had Carver sign it.

The note remains with Baby Yoda today, pinned in a plastic baggie on his back, along with the phone number of Tyler Eubanks, the 31-year-old Scappoose horse dentist who’s organizing firefighter donations, got Baby Yoda to them and is now running the Facebook page.

As the firefighters take pictures of Baby Yoda’s adventures, they text her the photos so she can get them up on the page, much to the delight of his fans.

“I look for updates several times during a normal day,” wrote Jacki Wittman of Columbia City, Oregon, on a recent post.

Diane Arzente, another fan of the Facebook page, wrote: “Baby Yoda and a little boy are spreading so much love and happiness all over … Keep the force going!”

“I really didn’t know that this was going to literally take off like a wildfire,” she said, adding that she thinks our troubled times helped fuel Baby Yoda’s popularity. “They’re having fun and it’s taking stress out of a very dark situation.”

Wildfires in the western U.S. have scorched millions of acres, destroyed thousands of homes and claimed dozens of lives, including firefighters.

Add that stress to the back-breaking job the firefighters have, trudging through backcountry, digging fire lines, working 16-hour days, all while being away from their families for weeks. 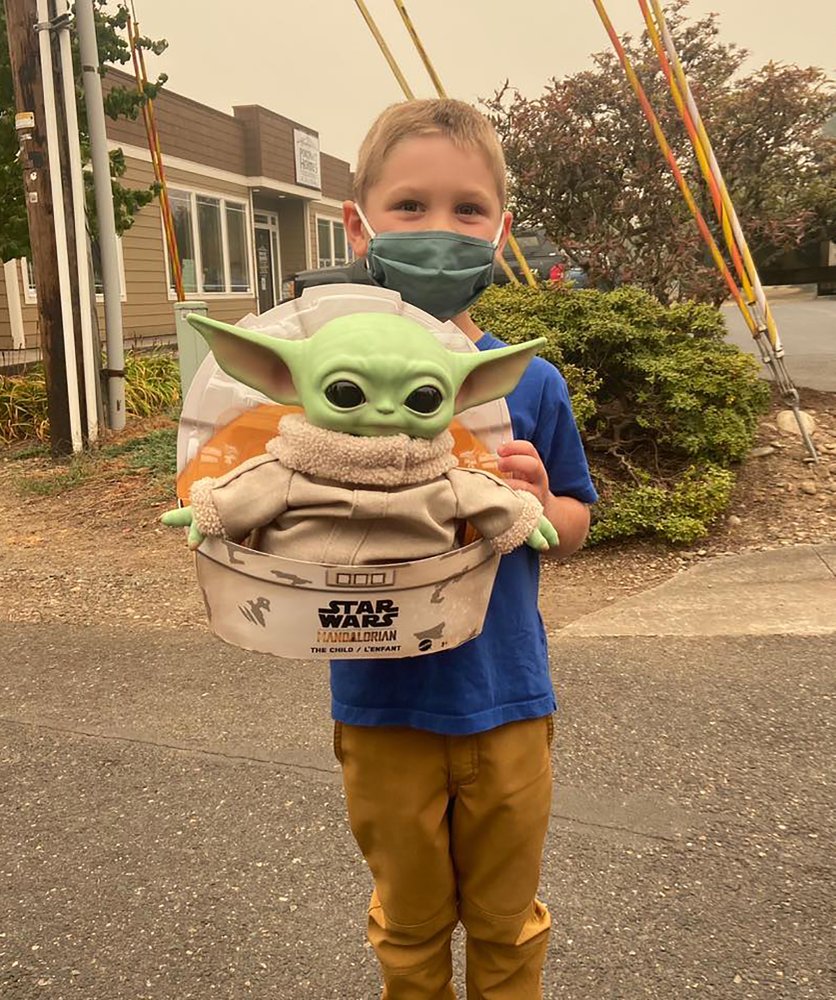 Five-year-old Carver holds up a Baby Yoda toy on Saturday, Sept. 12, 2020 in Scappoose, Oregon. Carver donated the toy to Oregon firefighters, who have been having fun posing the tiny green Force user on the fire lines since. Courtesy of Tyler Eubanks via AP

For them, Baby Yoda is more than just a bright spot.

“A lot of the people on my crew, I showed them the note and everything and they just loved it,” Drake, 28, said. “A couple people broke down in tears … It just really meant a lot to us and it was really emotional for a lot of people.”

Drake said it was extra special for him as a longtime “Star Wars” fan who also loves “The Mandalorian” TV show on Disney+, where Baby Yoda made his debut last year and quickly became an Internet sensation.

TJ Ramos, an air tactical group supervisor with the Oregon Department of Forestry, posed for selfies in his helicopter and took Baby Yoda on a flight over Oregon’s Holiday Farm Fire on Sept. 21.

He remembers when he got to announce to crews at the fire’s helibase that Baby Yoda had arrived. By then, he was a minor celebrity among all the fire crews.

“You could instantly see everyone perk up a little bit, some smiles came on some straight faces and it was a different day,” Ramos, 34, said. “There was a lot of, ‘Oh, my kid was telling me about Baby Yoda, can I get a selfie with him?’ I think it not only added some morale and just a lift to everyone, I think it added almost a connection to home life.”

Baby Yoda is now so in demand after his tours in Oregon and Colorado that fire crews from California, Washington and Canada all have requested that he join them.

“I’m hoping that we can keep it going,” Drake said. “He’s the 21st century Smokey the Bear.”