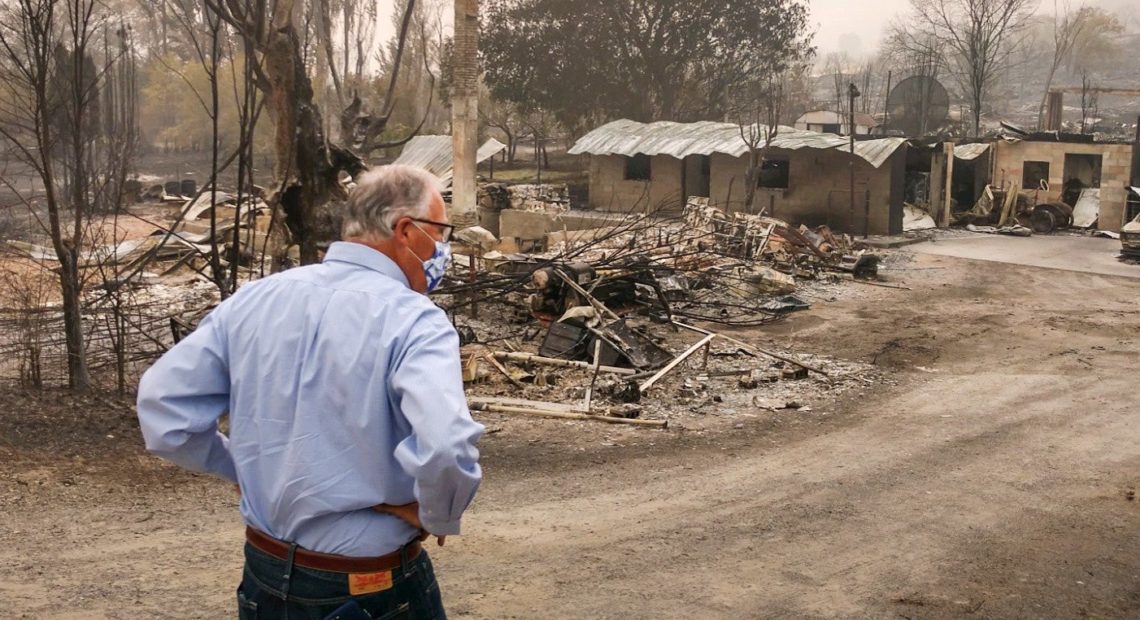 Gov. Jay Inslee On How To Stay Optimistic When Fighting Climate Change

The fires in Washington are largely under control now, but the state has been experiencing dangerous, even deadly, wildfires for years, something Democratic Gov. Jay Inslee says are only made worse by climate change.

In a recent op-ed in Rolling Stone, Inslee pointed out that in September, Washington state saw more than 600,000 acres burned in only a few days in the second-worst fire on record. “Wildfires aren’t new to the west, but their scope and danger today is unlike anything firefighters have seen,” Inslee wrote. “People up and down the West Coast — young and old, in rural areas and in cities — were choking on smoke for days on end, trapped in their homes. Fires like these are becoming the norm, not the exception. That’s because as the climate changes, our fires change.”

Inslee, who in 2020 campaigned for the Democratic presidential nomination on a platform to address climate change, is still working to bring climate change to the forefront of the political conversation, particularly in the face of the upcoming presidential election. He told NPR’s Michel Martin that despite the less-than-substantive policy discussions at the debate last week, he was glad that climate change was mentioned at all. In 2016, debate moderators did not ask about climate change.

“While we’re burning down and the glaciers are disappearing and the Arctic is melting and hurricanes … moderators in the debate groups have ignored this issue totally,” Inslee says. “Yes, it’s a good thing that it was brought up, but it was very, very disillusioning that one of the candidates prevented a rational discussion of this because it deserves it big time.”

Inslee talked to NPR’s All Things Considered about climate change, the fires raging in the West and how farmers are needed to help.

On the fires in the West

The fires are under control now, but we have to understand we have been ravaged by what I would call not wildfires, but climate fires. These are climate fires, fundamentally, because the recent cataclysmic events we’ve suffered now in multiple years, as California has as well, and now Oregon, that these are an entirely new beast.

When you talk to the firefighters, what they will tell you is that they’re seeing fire behavior that they’ve never seen before. Not only are they more frequent, but the intensity of these fires — people have just never seen this in our state before. And these are not just forest fires. These are grass and brush and sagebrush fires. And the situation now is the heat and the aridity have dried out this fuel, so that they are like putting gasoline all over the state of Washington.

On how climate change affects farmers and how farmers can help

Some of the first victims [of climate change are] the farmers who had their fields devastated in the floods last year. This year, they got hit by the 100 mile-an-hour-plus [winds]. It knocked down all their corn. When I was there — I mentioned Hamburg, Iowa — all you could see is all the silos that had been destroyed by the floods with all of their grain of the last year destroyed laying on the ground. So the farming community is one of the hardest hit.

So farmers are one of the first groups who were hardest hit, but they are also the group who can play such a pivotal role in reducing carbon, getting it out of our atmosphere because the soil can sequester carbon. We need to get carbon out of the atmosphere and into our topsoil and farmers play a very important role in that and can have a revenue stream so that we can pay farmers for a service of sequestering carbon to get it out of the atmosphere.

This is biologically clear that we can do this and we need to create systems that will create yet another revenue stream for farmers to provide that service to humanity and our economy.

And that plus they have the ability to grow abundant biofuels, which they’re doing today. I just went to one of our biofuels plants that uses soybeans from Iowa, and we make it into biofuels here and ship it all over right now. The birth of that industry has been driven by the clean fuel standard, largely in California. We want to do the same in my state. So, yes, this is a tremendous opportunity for action and it is a risk if we don’t protect our farming community. And I lived for 20 years in a farming community, so I know what this means.

There is progress going on in the United States. We just need to make it national. That’s No. 1.

No. 2, the technology, the rapidity of the technological progress is incredible. I actually wrote a book about this a decade ago, and I had a vision that we were going to have technological changes to make electric cars productive, which they now are becoming cost effective and [have] huge range. That solar would become cheaper — and wind — than coal that has happened.

So the technology, the curve of technology is as rapid in clean energy as it was in computing. And if you see how far we’ve come since the first laptop, we’re doing the same thing in clean energy.

And the third reason that we need to be optimistic is that it’s just the only effective tool. I think maybe it was Churchill who said, “when you’re going through hell, keep going.” And that’s what we need to do in this matter.

Robert Baldwin III and Tinbete Ermyas produced and edited the audio version of this story.