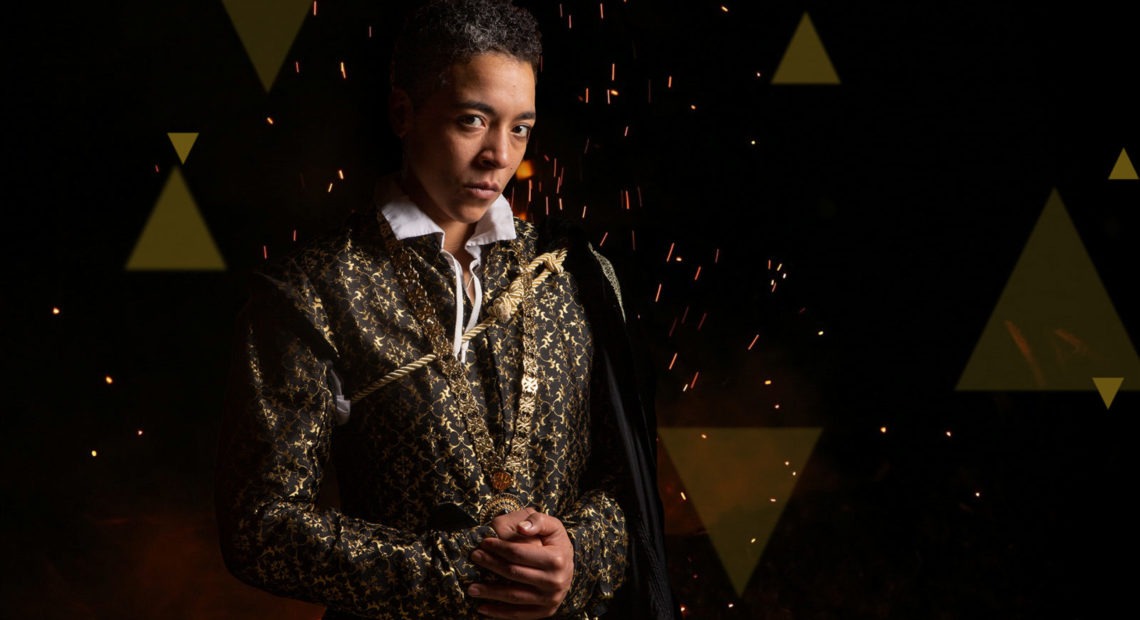 (Article and interview continue below video)

When Jessika D. Williams takes the stage as Othello, she sometimes doesn’t know if she’s reacting as the character or herself.

Williams, 35, has never felt this way in a role. But playing Othello as a Black woman amid nationwide protests against systemic racism, she sees parallels between racism in the play and in real life.

The Shakespearean tragedy centers on a Moorish general in Venice who is manipulated by Iago, his trusted aide. The play’s bloody finale culminates in a cauldron of jealousy, murder and deep remorse.

Williams first learned about the role of Othello, the only of Shakespeare’s theatrical leads who is widely interpreted as a Black man, while studying the bard as a teen at Interlochen Arts Academy, a fine arts boarding school in Michigan. Years later, she was cast in the role in a production staged this season by the American Shakespeare Center in Virginia’s Shenandoah Valley.

“No one could have known the impact that it actually might have on a person of color to play that role,” she said. Othello has long been viewed as a play imbibed with racism due to the dynamics of a white man systematically destroying the life of a Black man. As with most of Shakespeare’s plays, the titular role would have been played by a white man when it was first staged.

Williams also gave up her actors union membership to play Othello. The Actors’ Equity Association, the national union representing stage actors, did not approve the reopening of some theaters, like ASC, due to safety concerns over the coronavirus pandemic. 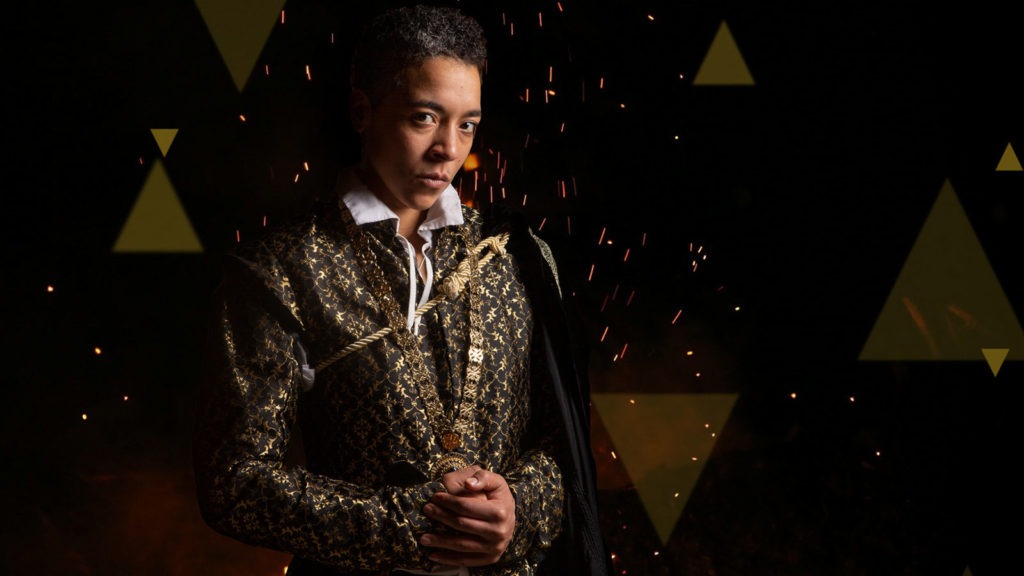 So Williams dropped her union membership, turning away from certain benefits, to perform as Othello. Ultimately, she needed the work — prior to the season, she had not been receiving unemployment benefits — and felt safe at the theater company.

The Center provided its ensemble, performing in “Othello” and the “Twelfth Night” in repertory until Oct. 18, with housing and health insurance. It also instituted strict COVID-19 guidelines based on medical advice, aimed at keeping both the actors, theater staff, and audience safe. Safeguards included the performers maintaining an “isolation covenant,” cutting indoor seating by more than half, mandatory masking for all non-performers and, for the first time, staging performances outdoors and streaming shows online.

The PBS NewsHour’s John Yang spoke with Williams midway through the season about portraying Othello at this moment of reckoning over racism in the country’s history, how the pandemic has affected her experience as an actor, and the racial and gender dynamics in the play.

What is it like to be playing Othello at this time of Black Lives Matter and reassessing and examining systemic racism? I imagine it must be a fascinating time to do this play.

It absolutely is. This is the first time where sometimes I’m not quite sure if it’s me reacting or the character reacting on and off stage. Like in the rehearsal process, I was getting really, really angry and aggressive over the little small details, like coffee not being made or my pencil not being in the right place.

I think that has to do with how we’re doing it and when we’re doing it. It’s really difficult to compartmentalize a lot of these elements in the theater that are being brought up right now, which we see theaters publicly making a statement in support of Black Lives Matter and being like “All right, like now’s the time.” And OK, we can say those things, but what are we actually doing about it? I feel like that’s something I’ve been able to brush off or not deal with. And right now, that just doesn’t seem possible.

With this show in particular, you know, I find myself getting angry at the audiences sometimes, which is not OK. The audience has a right to experience the play however they want to experience it. It’s not our job to tell them what to think. But sometimes I really struggle when I find people enjoying and delighting in watching a man make another man crumble. I feel like a trap that you can fall into as people are just like, “Well, what the hell’s wrong with Othello? Why did he fall for it? What’s wrong with this guy? He must be weak. You know, it must be because he’s different, or it must be because he’s Black. He’s just not as smart as Iago.” Those are just a couple of routes that you could go down or I assume that some people might take away from the play or just not really see the depth of this character.

Sometimes it’s really hard to go out there and do the show and try to convey that work when I’m pushing through the role and really want the audience to see it that way. It’s really hard to do the play knowing that they may or they may not, and wishing that there was more you can do, that somehow this play could be serviceable to the community and just shift one person’s thinking.

Because we’re in masks and because we don’t get to go to the bar and talk about the play afterwards, we don’t get that conversation. And I feel like the conversation is the most important part right now. If we’re gonna go to the theater, and we’re going to make it dangerous, and we’re going to make it profound, and we’re gonna risk ourselves in doing this, then let’s talk about it, you know, and that’s really difficult right now. At the same time, it is such a gift too to be able to do it at all.

There’s so much academic discussion about Othello and whether the play itself is racist and whether the modern interpretations have been racist. You’ve wanted to do this since you were a kid, why? Where did that come from?

I had an amazing Shakespeare teacher in high school, at Interlochen Arts Academy, David Montee. We were rolling through plays, and it was Shakespeare class, and as soon as I got wind that there was a Black character in the Shakespeare canon, that was it. I didn’t really know what Othello was about and I was like “Well, I’m going to play that one day because they do cross-gender casting.” I was 17, and I was like, “that’s what’s going to happen.”

Later on in my education and then eventually reading the play and having the opportunity to see it, it just stood out as an epic tragedy and an epic story. I think I’ve always just wanted an opportunity to have a turn, to have a go at it.

There’s a lot of racism in the play. But it’s also a really fascinating exploration of human psychology. You know, again, that is a human condition that has nothing to do with race. If we really want to get into it and talk about Iago’s psychology and his methods and what drives him to do what he does to Othello, there’s a lot more going on in that guy’s head that’s complicated and problematic.

The part was not written for a Black man to play, like Shakespeare didn’t write it knowing that a Black man would play it one day. So we have it from a white man playing a Black man. No one could have known the impact that it actually might have on a person of color to play that role, to be inside of that role while they’re in this world that is just manipulating them or they’re trying to assimilate into this seemingly right world or right way. And the impact that that has on the actor playing it because the white actor is not going to see it through that gaze. They’re gonna see it through their gaze.

And it’s difficult because, in a way, I want to fight the text. In a way, I want to wake the play up. I want to jar the audience and be like, “No, can’t you see what’s going on?” I’ve never experienced those kinds of emotions or feelings about a play working inside of it before. And I’m getting a lot of those feelings a lot. And it’s fascinating, it’s interesting to wrangle.

There’s also a lot of hyper-masculinity in this play. What do you think being a Black actor and a woman brings to the role? What does that casting add to the portrayal of this character?

I like to look at gender in itself as a performative role that we play as humans: that there is a way to be a man or there’s a way to be a woman. I don’t personally believe that, but I believe that society has created these constructs. Like, dig to get rid of parts of yourself that are bad, that are dark, that are wrong in order to be this way and fit in.

In order to be a guy, you have to treat your lady like a piece of property, like, “How dare she go off and do something else?” And you got to live by that double standard. If she cheats on you, the right thing to do is to slap her, you know, and it is the right way to be a man to move through the world, because that’s what manhood is.

And I feel like, as a society, we still struggle with that. We still have these gender norms, these performative roles that somehow give us a pass at being one or the other. I’m a cis gender female. I feel really confident about my identity. But I get misgendered a lot because I don’t wear the kind of performative female gender — I don’t put makeup on every day. I don’t wear it. I’ll have my nails painted. I don’t wear dresses every day. And somehow that means that I don’t fit in as a chick.