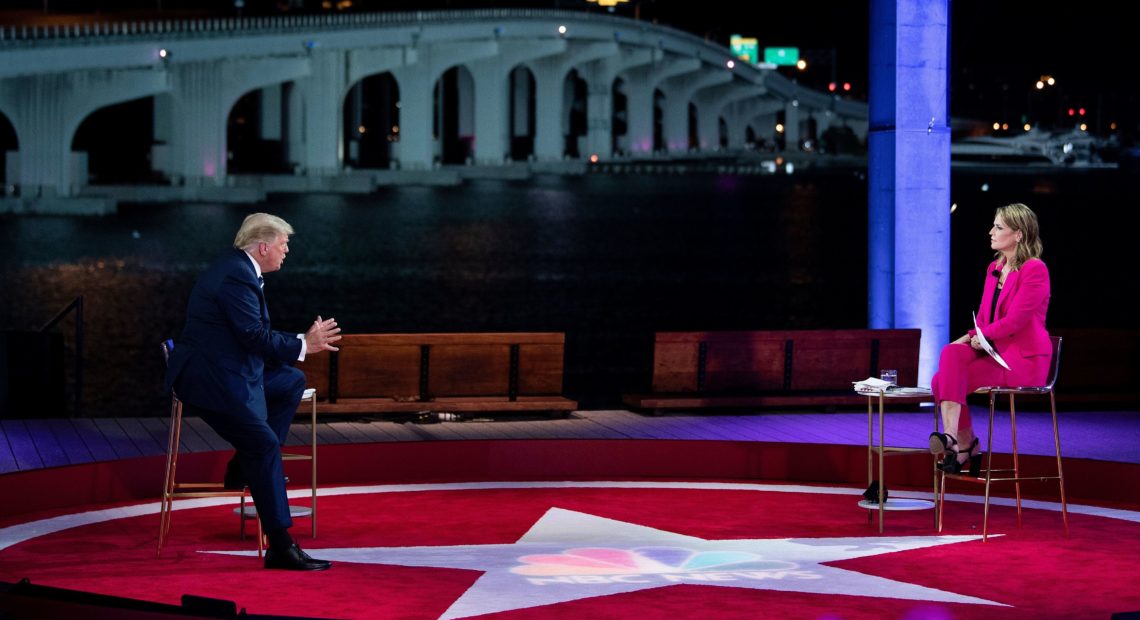 The two were supposed to appear in one event Thursday night, but Trump balked at the decision by debate organizers to hold a virtual town hall due to health and safety concerns amid the coronavirus pandemic.

The campaign of Biden, the Democratic nominee, then scheduled a town hall on ABC News. Days later, the Republican Trump’s campaign set an event with NBC News.

The first segment of Trump’s town hall, held in Miami, was questions by NBC moderator Savannah Guthrie, before prospective voters got a chance to weigh in. While Trump often sparred with Guthrie during an hour of back and forth, Biden spun out often-lengthy, policy-heavy responses to voter questions and follow-ups from the ABC moderator, George Stephanopoulos, in Philadelphia.

Trump on QAnon and “peanut” debt

Trump discussed a wide range of topics, including his handling of the coronavirus, which he defended; the times he failed to denounce white supremacists, which he denied; and the question of whether he would agree to a peaceful transfer of power if he loses to Biden, which he again answered obliquely.

“And the answer is yes I will. But I want it to be an honest election and so does everyone else,” said Trump, who has offered unfounded warnings about the integrity of the election. 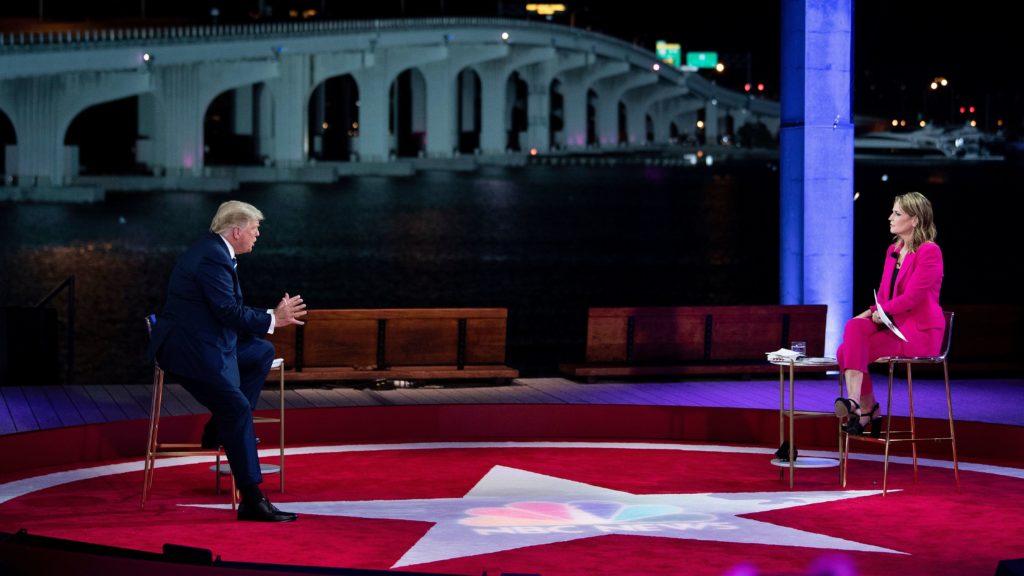 An exchange over QAnon produced a rather startling moment, when the president declined to denounce it after Guthrie briefly explained the baseless conspiracy theory: that Trump is battling a “deep state” child sex trafficking ring run by Democrats.

“I know nothing about it. I do know that they are very much against pedophilia,” he said, before pivoting: “I’ll tell you what I do know about: I know about antifa and I know about the radical left.”

Another contentious moment came amid a discussion on Trump’s tax returns, which were revealed last month in a bombshell New York Times report.

Speaking on his finances and the Times‘ disclosure that he holds debts totaling $421 million, Trump said: “The amount of money, $400 million, is a peanut. It’s extremely under-levered. And it’s levered with normal banks.”

Biden also fielded questions on the pandemic and the economy, as well as fracking, foreign policy and transgender rights.

Notably, Biden made his most extensive comments to date on the question of court packing — the idea promoted by some Democrats to add justices to the Supreme Court should the Senate confirm Trump nominee Amy Coney Barrett to the court this fall.

In recent weeks, Biden had avoided directly answering whether he supports the idea, but Biden this week reiterated that he’s “not a fan.”

“I’m not a fan, but it depends on how this turns out,” Biden said during the town hall. “Not how he wins, but how it’s handled.” 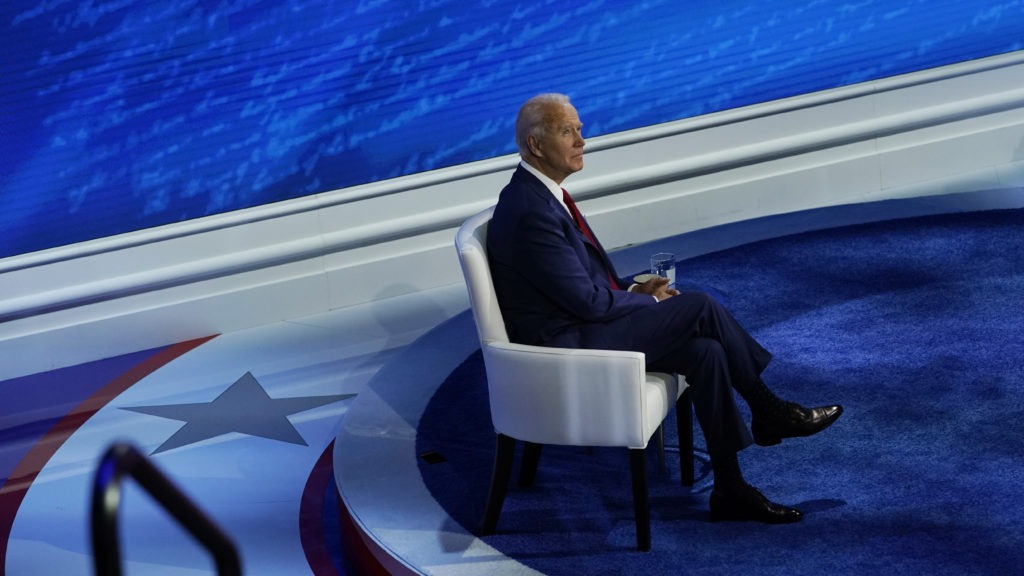 Joe Biden pauses before the start of a town hall with moderator ABC News anchor George Stephanopoulos at the National Constitution Center in Philadelphia on Thursday. CREDIT: Carolyn Kaster/AP

The Democrat was also pressed on his support of decades-old crime legislation that is blamed for increasing incarceration, especially among minority men.

Stephanopoulos asked Biden if his support of such legislation was a mistake.

“Yes, it was,” he replied. But here’s where the mistake came: The mistake came in terms of what the states did locally.” Biden then defended parts of the legislation he said he advocated for, such as drug courts.

Biden also said “we should be thinking about” making vaccination against the coronavirus mandatory, should a vaccine or vaccines be proven safe and effective, but said he recognized it would be very difficult to enforce vaccination.

A presidential debate was initially scheduled to be held on Thursday, but after Trump was diagnosed with — and eventually recovered from — the coronavirus, his campaign refused to adhere to holding a virtual event instead of an in-person debate, leading to the dueling town hall programs.

Trump on Thursday night also said he didn’t know if he had been tested for the coronavirus prior to the first debate, on Sept. 29.

When asked whether his team had adhered to the debate commission’s “honor system” for the candidates to arrive with a negative coronavirus test, Trump said: “I don’t know. I don’t even remember. I test all the time. But I can tell you this: After the debate, like, I guess a day or so — I think it was Thursday evening, maybe even late Thursday evening, I tested positive.”

There is one more debate on the schedule before the election: Oct. 22 in Nashville.

Biden was asked whether he expects that debate to happen and whether he will demand that Trump test negative on the day of the debate before the two appear on the same stage.

“It’s just decency to be able to determine whether or not you’re clear,” Biden said. “I expect to be there.”