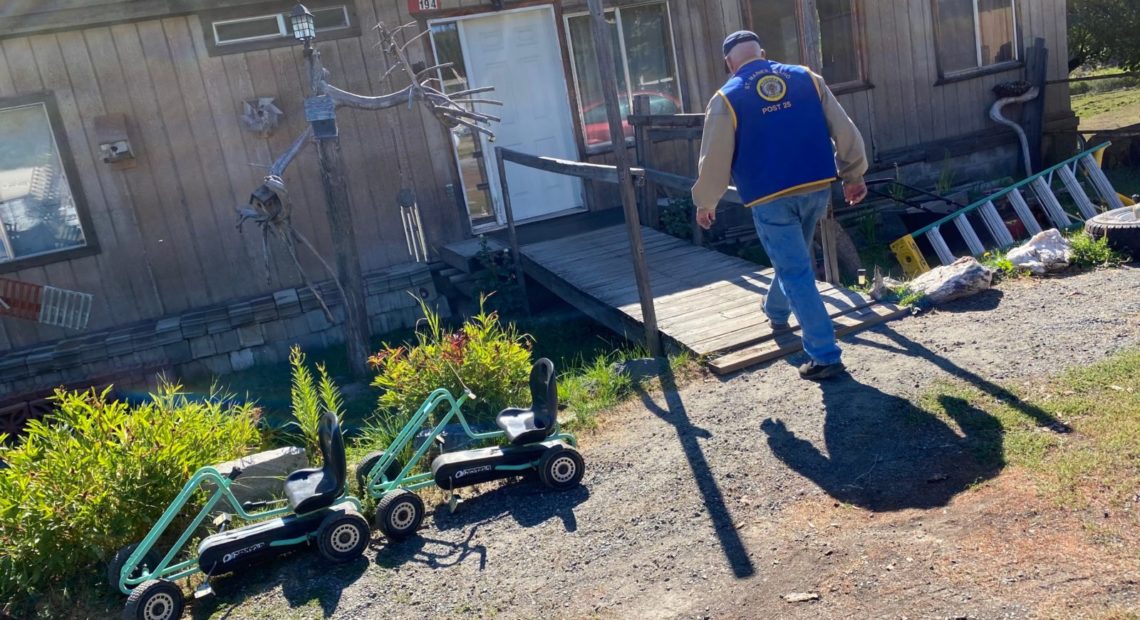 In Rural North Idaho, With Help Far Away, Communities Take It Upon Themselves To Tackle Suicide

Drifters Western Bar And Grill is a no-nonsense diner in a red wooden building just past the sign that welcomes you to Emida, Idaho. Elk and deer mounts adorn the wall, and maple leaf flags remind you that you’re just three hours south of the Canadian border.

This is where Hank Thornton started his rounds on a recent warm September day. He’s partial to Drifters’ omelettes, but that’s not what brought him here.

“They’ve got a great breakfast here,” he said. “But no, it’s not just to get breakfast.”

For Thornton, this is a place to get information. And potentially save lives.

Emida is set amidst rolling, pine-clad mountains and Drifters is one of the few meeting places for the 684 people who call the town home. Thornton greets just about everyone in the place by name, chats with the regulars and asks how they’re doing and what’s happening in town.

Amid the idyllic forests, soaring peaks and grazing cattle, a crisis is quietly rippling through Mountain West communities like Emida: suicide.

Tens of thousands of Americans die every year from gun suicide, and some of hardest-hit areas spend the least on prevention.

In the Idaho Panhandle, some small-town residents are stepping in where the government has failed. 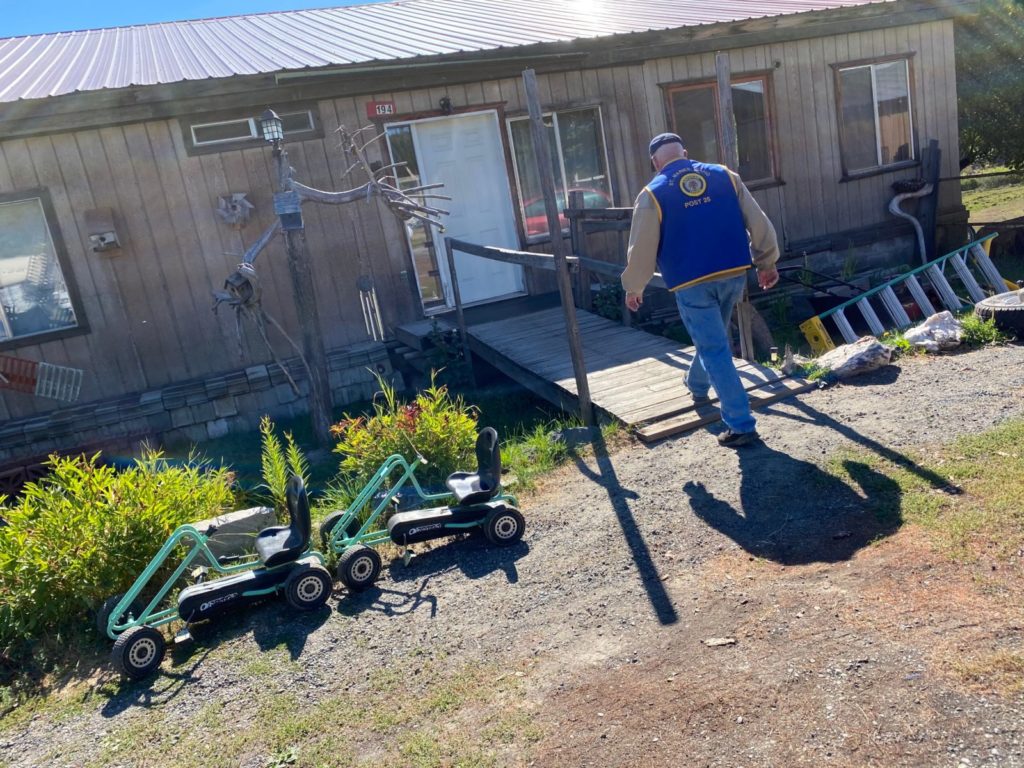 Hank Thornton makes the rounds in Benewah County, Idaho, where he checks on veterans to see if they need services like food assistance and medical treatment. He also looks for signs of suicide risk and offers resources and an ear when needed. CREDIT: Heath Druzin / Guns & America

The region has some of the highest suicide rates in the country and some of the lowest funding rates for mental health care. Suicide prevention has often been an afterthought for state governments, though measuring prevention funding is difficult due to it often crossing many agencies and involving state and federal money.

For example, Wyoming has the highest suicide rate in the nation. Its firearm suicide rate of 18.7 per 100,000 was nearly 2.5 times the national average in 2018, the most recent year for which numbers are available. Yet it wasn’t until August 2020 that it set up its first suicide prevention hotline, the last state in the nation to do so. And here in Idaho, people complete suicide at the fifth highest rate in the country. Yet the government spends less per capita on mental health care — less than $33 per person each year, according to a 2013 study — than all but one other state, though the connection between mental health spending and suicide rates is not clear.

This year, some Republican state lawmakers walked out of a hearing where Idaho’s Superintendent of Public Instruction Sherri Ybarra, also a Republican, was asking for funding in part to address youth suicide.

Advocates say Idaho’s support for prevention efforts has been uneven at best. They point out the state funds the Office Of Suicide Prevention, which wasn’t created until 2016, well below levels requested by the Idaho Department of Health And Welfare and Gov. Brad Little.

That doesn’t sit well with Thornton: “How can we rank so high in attempted suicides and fund it so little?”

But he and other community members aren’t waiting around for the answer. They’ve taken it upon themselves to step into the spaces where the state is largely absent.

After leaving Drifters, Thornton walks across the street, careful to look both ways. This is timber country, and fully loaded logging trucks regularly rumble through town. He’s head for Roxboro Inc, a consignment store run by Annette Kaye, his chief intel source in the area.

Kaye knows just about everyone in town. She especially looks out for the group that also concerns Thornton: veterans.

“I was in love with a Vietnam veteran,” Kaye said. “Came home one day and found him under the bed. And we went through a year of PTSD, partial inpatient and partial outpatient, and I learned a lot about Vietnam that America doesn’t want to know.”

Now Kaye trains service dogs to help veterans with post-traumatic stress and physical injuries. And she lets Thornton know if someone needs a knock on the door, a kind word and information about mental health resources.

“If they’re struggling with PTSD or whatever, she’s the ears and eyes of the community here,” Thornton said. 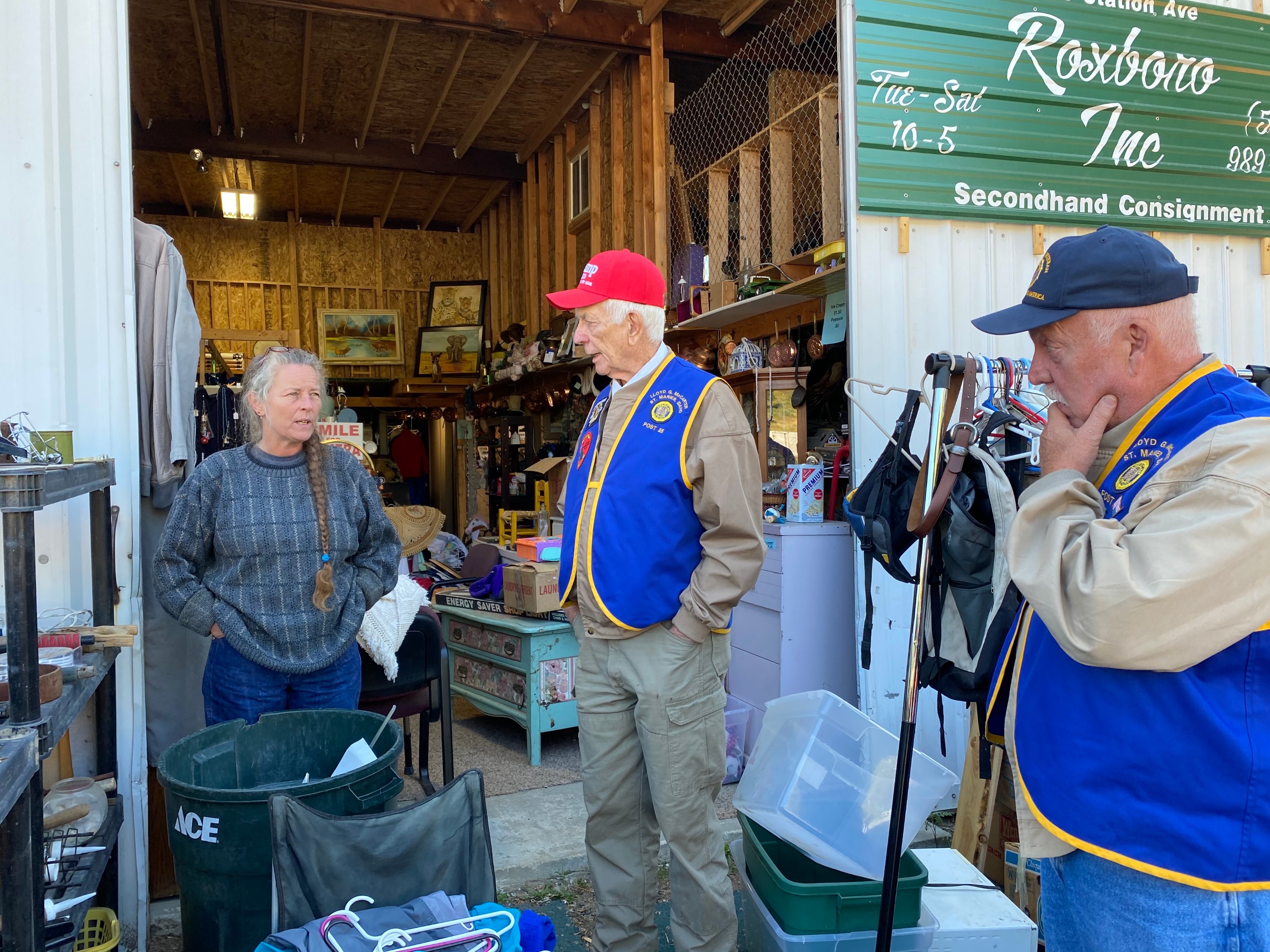 Hank Thornton, right, and DaNel Wilkins chat with Annette Kaye in Emida, a tiny rural town in North Idaho. Kaye tips off Thornton and Wilkins if she thinks someone in town is struggling. Mountain West communities like Emida have been hit hard by suicides and community members like Kaye, Thornton, and Wilkins have taken it upon themselves to reach out to neighbors in need. CREDIT: Heath Druzin / Guns & America

In this world, help is rarely offered in virtual spaces. Thornton’s rounds are done face to face. He knocks on doors to see what people need and connects them with help. Just as importantly, he shows them someone who cares.

And he comes armed with contact information for mental health care services. He says he’s gotten more than a few veterans help. They often say he’s the first person who asked if they need it.

After visiting with Kaye, he visits the homes of a couple older veterans who had been struggling. He does this every week, sometimes driving deep into the mountains to knock on doors and chat with people across the county, many of whom don’t get a lot of visitors. Not everyone opens the door, but Thornton said most are glad to talk to someone about how they’re doing.

Idaho’s Benewah County covers 784 square miles and has just over 9,000 residents. This is not a place you move to be around people: Many live off the grid and alone out here. It works for a lot of folks, Thornton says, but it can be a very isolating environment during a mental health crisis.

Thornton is a 70-year-old Vietnam veteran with a white mustache and an easy smile. He’s a gun owner and a member of the local American Legion post, retired from a career managing Home Depot stores. He’s uniquely suited to connect with the group most at-risk for suicide, who are often also the most resistant to seek help: older men.

“They’re tough and they’re strong and they, you know, take care of things behind closed doors,” says Kristi Scott, founder of the Suicide Prevention Action Network (SPAN) of Benewah County. “They don’t talk about their issues publicly. And there are very independent people in these communities.”

Scott credits community members like Thornton for reaching out, even to people who might take some convincing. And Scott knows because she’s also one of those community members trying to stem the tide of rural suicide. Scott has lived in the small logging town of St. Maries (pop. 2,448) for 25 years, including 16 years working as a hairdresser. Before she co-founded SPAN Benewah last year, there were no resources for those affected by suicide within an hour’s drive.

“Trust me,” she said, “I know more than most people would care to know,” she said. 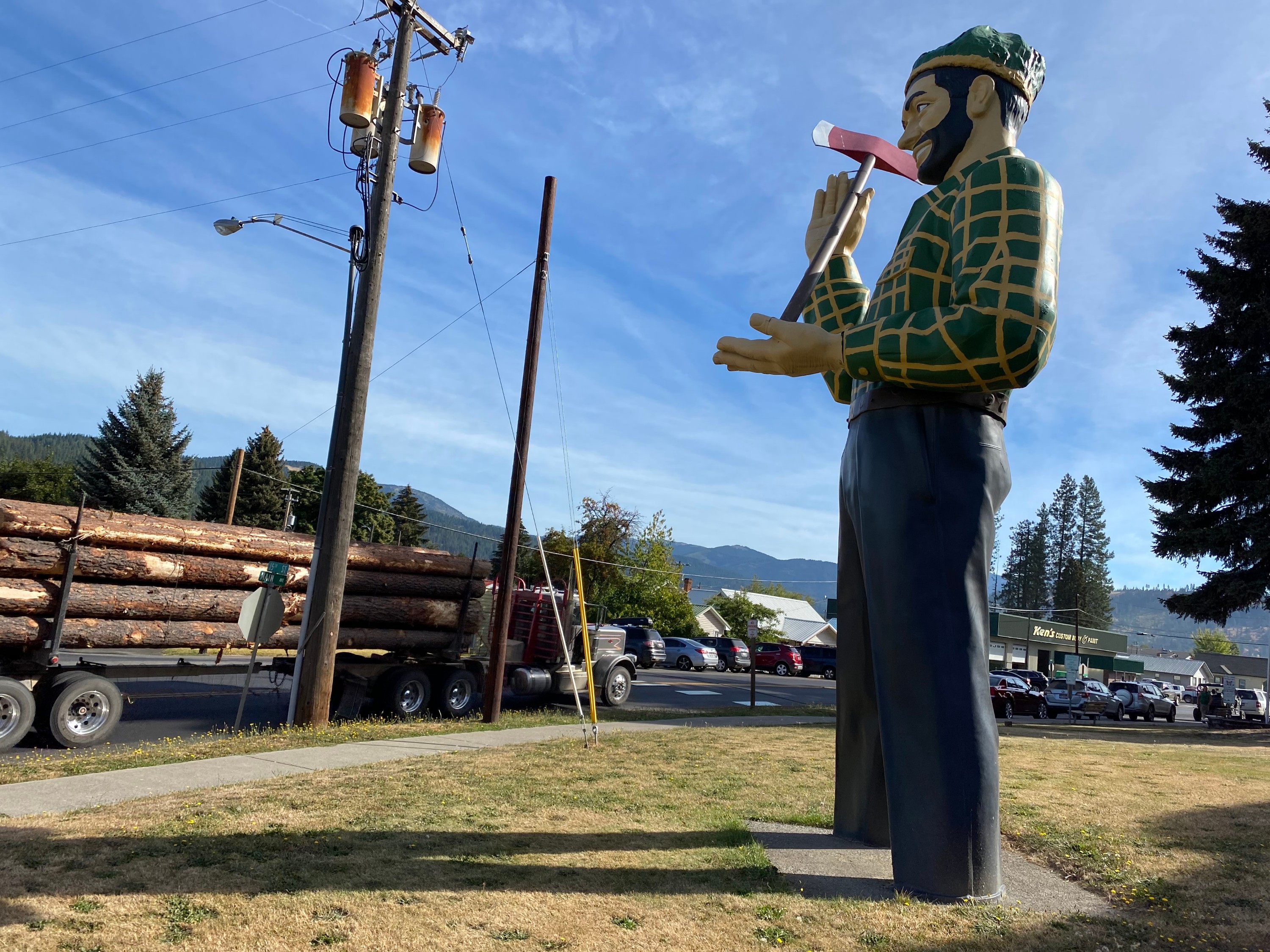 Visitors to St. Maries, Idaho, are greeted by a 25-foot statue of Paul Bunyan. This timber town, like many rural Mountain West communities, has been hit hard by suicide and, until recently, had few resources for survivors and at-risk residents. CREDIT: Heath Druzin / Guns & America

SPAN Benewah receives no state funding, instead surviving on a small grant and donations. Scott and a friend built the group from nothing because they felt they had no choice — she watched family after family hit by suicide with no local resources to help them.

“They’re just left picking up the pieces and not knowing where to turn,” she said.

Her alarm is justified. Already-high suicide rates have been steadily going up in the region over the past decade. And it’s not just affecting older people. A recent analysis by gun control advocacy group Everytown For Gun Safety shows youth firearm suicide rates are at an all-time high. Roughly 3,000 American aged 10-24 die by firearm suicide each year. And the rates in Idaho have increased by over 100% in the past decade.

“It’s just been one of those things where I think I feel like we’ve kind of just swept under the rug and quietly hoped that it would just go away and take care of itself over the years,” Scott said.

The factors affecting suicide rates are complex. But there is one thing that is simultaneously impossible to ignore and difficult to talk about: firearms. And that is one thing all Mountain West states have in common — higher than average rates of gun ownership. Studies have found a correlation between that and suicide.

Gun safety is a tough discussion anywhere. Scott says that’s especially true in places like St. Maries and Emida, where firearms are so intricately woven into the culture.

“These people raise their children to understand the safety of a firearm and the danger of it as well,” she said. “You don’t know what you don’t know. And a lot of times, family members will have someone right under their roof and not know that they’re struggling with suicide.”

But that tough conversation is much more effective when it comes from neighbors like Scott and Thornton, said Shannon Decker, executive director of the Idaho-based suicide prevention group The Speedy Foundation.

Given Idaho’s historic lack of funding for suicide prevention, there’s been no choice for a lot of people, Decker said. It took until 2016 for Idaho’s state government to revamp its prevention efforts and back it up with public funding.

The Idaho Department of Health and Welfare declined a request for a recorded interview with officials. Instead, Idaho Public Health Administrator Elke Shaw-Tulloch sent a written statement. In it, she acknowledged a lack of prevention funding prior to 2016 but said Idaho had since made strides. She pointed to a five-year suicide reduction plan launched in 2018 and state support for a suicide prevention hotline.

‘Maybe We Could Have Made A Difference’

Back on the road, Thornton says it was a personal experience with suicide that shaped his thinking.

A close friend called him to say goodbye, that he wasn’t going to make it. Thornton raced over to his house and found him under the bed with a loaded gun. He convinced his friend to give him the gun and get help.

And his friend got better.

But he’s seen too many others who had no one to turn to.

“We lost one here in March,” he says, choking up. “We didn’t know him. We did his funeral. Had someone called us, someone just let us know that he was struggling, maybe — maybe we could have made a difference.”

Click here to read more about suicide prevention efforts in Colorado and Utah.

Resources if you or someone you know is considering suicide:

The Guns & America series In Their Own Hands explores the complexity of gun suicides in the Mountain West, where gun ownership is often a way of life, and highlights communities addressing this persistent problem.