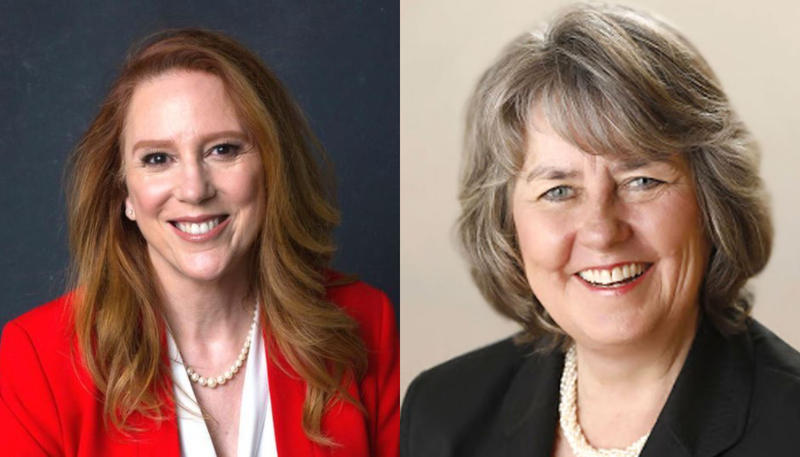 With Elections Under The Microscope, Washington Has A Fierce Race For Secretary Of State

–Register To Vote In Washington

–What To Know For Voting In Washington In 2020 (Crosscut)

For more than half a century, Republicans have had a lock on Washington’s Secretary of State’s office. This year, Democrats hope to end that five decade run by unseating incumbent Kim Wyman who’s seeking a third term.

Democrats feel they have the political winds at their back and an unusually strong challenger in Gael Tarleton, a state lawmaker and former Port of Seattle commissioner who once worked as a defense intelligence analyst for the Pentagon.

Republicans, meanwhile, are counting on a long history of ticket-splitting by Washington voters who might repudiate President Donald Trump at the top of the ticket, but be willing to support a veteran elections official and familiar state Republican further down the ballot.

This race is also taking place against the backdrop of President Donald Trump’s sustained, and unsubstantiated, attacks on vote-by-mail, as well as concerns about Trump administration interference with the United States Postal Service (USPS).

In that sense, the president and the election itself have become issues in this statewide race.

For voters, the Secretary of State’s contest offers not just a window into national politics, but a study in contrast.

In Wyman, they get a longtime, certified election administrator who says her job is to inspire confidence and ensure that people can register to vote and get their ballot on time.

In Tarleton, voters would get someone with a background in technology and national security who says, in these unprecedented times, the job of Secretary of State has changed and that it’s time for new leadership.

The contrast between the candidates is further highlighted by their responses to the president’s efforts to undermine vote-by-mail, which virtually every county in Washington fully embraced by 2011.

Tarelton has framed the president’s rhetoric and actions as an existential threat to democracy.

“I believe when our president is attacking our voting by mail and our postal service, he is attacking the foundations of how we exercise our right to vote,” Tarleton said in an interview.

Wyman has avoided directly criticizing the president, choosing instead to focus on the potential fallout from his comments and tweets.

“Defending our democracy against direct attacks on our elections is not partisan, and we all know it,” Tarleton said.

Tarleton also said Wyman should have joined Democratic Attorney General Bob Ferguson in suing the Postal Service over changes to post office operations and joined with Colorado’s Democratic Secretary of State who sued over a misleading USPS postcard that went to voters in vote-by-mail states that said they needed to request a ballot, which is not true.

“That’s what you do when things are under attack,” Tarleton said.

Wyman countered that she responded to the changes at the post office by issuing an emergency rule requiring county auditors to use first class stamps to mail out ballots within 15 days of the election. In response to the USPS postcards, her office issued a statement clarifying that Washington voters don’t need to request a ballot.

In July, when Trump tweeted about possibly delaying the 2020 election, Wyman issued a statement that read in part: “The President’s and Attorney General’s continued consternation with vote-by-mail is precisely why I invite them to come to Washington state to see firsthand how my office and Washington’s 39 county election officials have worked diligently to build in robust security measures so people can vote safely this fall.”

But Tarleton said none of those actions went far enough.

Tarleton also said Wyman hasn’t done enough to expand access to voting during her eight years in office. In 2018, majority Democrats in the Washington Legislature passed a package of measures dubbed the Access to Democracy package. The bills included same-day voter registration, pre-registration of 16- and 17-year-olds and a state Voting Rights Act.

As the bills were being heard in the Legislature, Wyman and her deputies expressed concerns about details contained in the legislation and the pace of implementation. Recently, Wyman said she supported the overall intent of the legislative package, but was concerned about how each measure would be implemented. She added that her interest is in balancing access with security.

“My opponent would like me to be a vote-suppressing Republican and she is trying every which way to Sunday to paint me as being that,” Wyman said in an interview. “In fact, I am a champion of [and] quite frankly an architect and one of the builders of arguably the most inclusive, most accessible and most secure system in the country.”

Tarleton said the voter access bills Democrats passed should have come to the Legislature as Secretary of State-request legislation. Tarelton also hammered Wyman for testifying “with strong concerns” on H.R. 1, an election security and access bill sponsored by Democrats in the U.S. House.

Wyman testified in 2019 that the bill would increase the cost of conducting elections and enact “prescriptive” federal regulations on local election officials.

Tarleton countered that the measure, which was opposed by Congressional Republicans, would have expanded voter access and provided funding to states.

On specific issues, the candidates also display their contrast. For instance, at a debate in September sponsored by the Association of Washington Business (AWB) moderator Essex Porter of KIRO-TV asked the candidates about allowing people with felony convictions to vote.

Wyman said she was comfortable with the current rule that anyone who is under the supervision of the Department of Corrections is not eligible to cast a ballot.

Tarleton, though, said she believed people in state prison should not lose their right to vote.

“This is truly a moral view that I have and I believe strongly that we should give everybody a chance to express their right to vote in our democracy.”

On other issues, though, the candidates appear more aligned. Neither supported requiring proof of citizenship in order to register to vote. Both also opposed allowing electronic signatures for voter initiative petitions. And both have expressed interest in moving the state’s August primary to earlier in the year with the goal of increasing voter turnout.

Like Wyman, Tarleton is a supporter of vote-by-mail and neither candidate sees voter fraud as a major concern. In 2018, more than 3.1 ballots were cast in the general election. Of those just 142, or .004 percent, were flagged as suspected cases of improper voting, according to the Secretary of State’s office.

But other threats and challenges do loom, including the potential for cyberattacks, foreign interference and the risk for major electoral disruptions in the event of an earthquake or other natural disaster.

In making the case for a third term, Wyman points not only to the implementation of VoteWA, but also the fact Washington established the nation’s first cybersecurity operations center for elections.

Tarelton points to a law she got passed this year that requires the Secretary of State to report annually to the Legislature on security breaches and on options to improve election security. The law also requires voting systems to pass a vulnerability test before being purchased or leased.

If elected, Tarleton said she would focus on expanding voting access, election security and innovation. One of her top priorities, she said, would be to try to reach the more than one million potentially eligible voters in Washington who are not registered to vote.

Wyman said her priorities include continuing to focus on cybersecurity, election modernization and trying to get funding for a new state library and archives building.

The secretary of state’s race appears highly competitive this year. A recent KING 5 News poll found that Wyman has 45 percent support to Tarleton’s 40 percent, but with 14 percent still undecided.

Both candidates have built significant campaign war chests. Filings with the state’s Public Disclosure Commission show Wyman has raised $884,880 with Tarleton close behind at $752,875 raised.

Each candidate is also benefiting from outside spending with the Republican State Leadership Committee spending on behalf of Wyman and the Democratic Association of Secretaries of State going to bat for Tarleton.