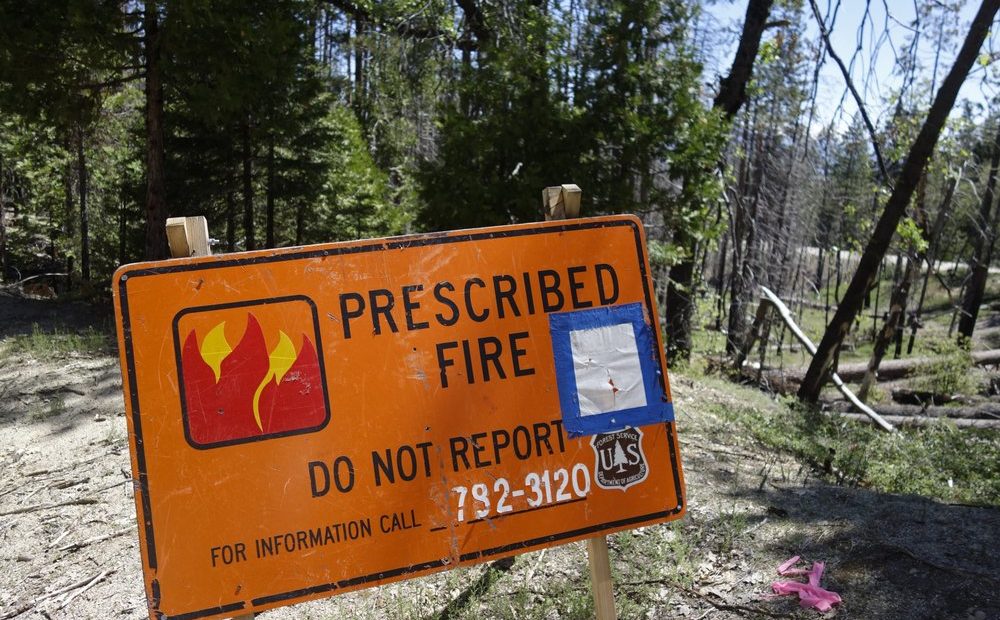 Earlier this month California Gov. Gavin Newsom, looking uncharacteristically wan and frustrated, stood in the burnt ruins of an elementary school in Napa County obliterated by yet another catastrophic blaze.

It’s a scene the governor acknowledged has become painfully familiar across the Golden State.

“Regions that have been torn asunder by wildfires seemingly every single year, this drum beat where people are exhausted, concerned, anxious about their fate and their future not just their safety,” Newsom said, adding with a hint of exhaustion, “so clearly we have our work cut out for us to deal with not only suppression, but prevention strategies.”

Top of the prevention strategy list for fire ecologists is more fire. This historically destructive wildfire season across much of the Western U.S. has wildfire experts calling for a dramatic increase in the numbers of acres intentionally burned. (That’s when trained staff deliberately set fires as a form of control.) They also want significant new investment in workforce training and infrastructure to scale up prescribed burns on public and private lands. 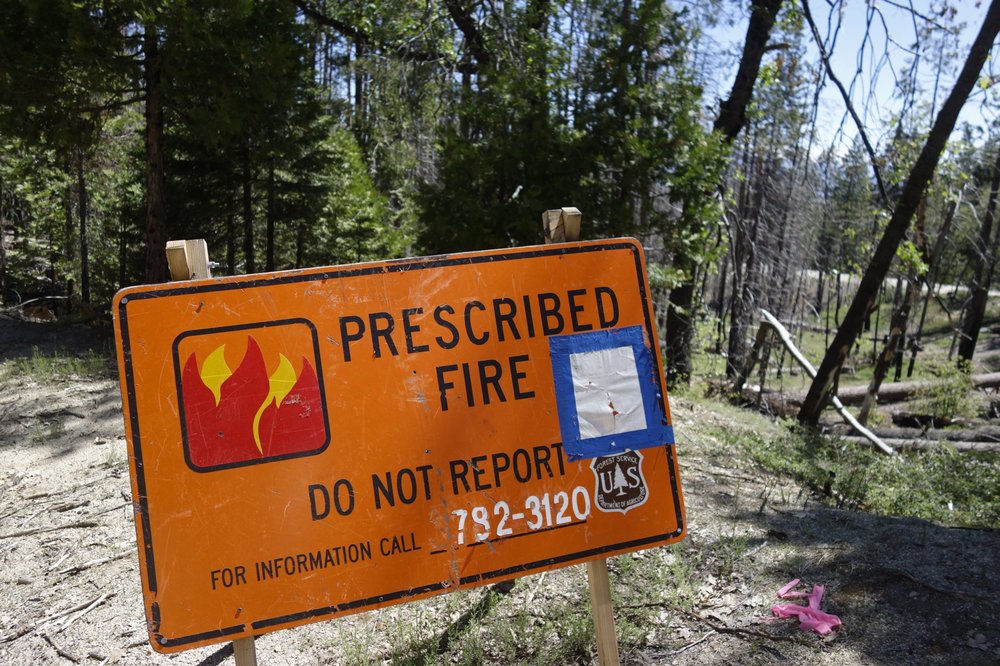 A sign for a prescribed burn in the Giant Sequoia National Monument, Calif., remains posted two years after the fire. The prescribed burn, a low-intensity, closely managed fire, was intended to clear out undergrowth and protect the heart of Kings Canyon National Park from a future threatening wildfire. The tactic is considered one of the best ways to prevent the kind of catastrophic destruction that has become common, but its use falls woefully short of goals in the West. CREDIT: Brian Melley/AP

Vastly increasing the number of these low-intensity, carefully managed fires is key. Experts say it reduces dangerous levels of highly combustible fuel and underbrush built up over more than a century of trying to snuff out most every forest fire. The conditions set by that longstanding federal and state policy are now worsened by climate change, with fires growing larger, more frequent and more destructive.

“Some people might say that they’re scared of doing prescribed fire. But you know, I’m scared what will happen in the next 10 years if we don’t get prescribed fire,” says fire ecologist and professor Kate Wilkin with the Wildfire Interdisciplinary Research Center at San Jose State University.

In Colorado, three of the state’s five largest wildfires have burned this year, including the still-burning East Troublesome and Cameron Peak blazes. In California, five of the biggest on record have occurred just since August.

Wilkin recognizes how awful it’s been for many in recent years: people who’ve lost loved ones, homes, businesses and entire communities damaged or destroyed. There’s the fear, stress and the smoke-filled air drifting hundreds of miles. So she knows most people in the West right now might not want to hear it, but the West needs to strategically use more fire to fix the region’s wildfire problem.

By contrast, in the past few years California intentionally burned roughly 50 thousand acres on public lands. In fact, a study published in the journal Fire showed that prescribed burns on federal lands in the West over the past 20 years stayed flat or fell despite ongoing calls to do much more.

‘Losing this battle every year’

Bureau of Indian Affairs (BIA) was the only federal agency to substantially increase prescribed fire use, the study said, likely due to tribal self-governance and a historic embrace of intentional fire.

Federal and California officials recently signed an agreement to try boost that significantly: the new goal is to treat about 1 million acres a year with combined thinning and controlled burns.

But experts warn that states continue to set ambitions prescribed fire goals they never reach. And critics say that new goal is nowhere near enough to meet this moment.

“It’s not something in which incremental, cautious decisions are going to solve the problem,” says Malcolm North, an outspoken research scientist with the U.S. Forest Service who has long advocated for more controlled burns. “We have some of the best firefighting forces in the in the world. And yet we’re obviously losing this battle every year, both in terms of cost, acreage and damages.”

North says the public has to realize that they’re going to get fire one way or another. “But you can have much better outcomes when you’re proactively putting the fire on the landscape rather than reactively trying to suppress it and then dealing with the inevitable escapes,” he says

He and others say a major obstacle to expanding controlled burns is institutional inertia in these large, risk-averse state and federal agencies. Critics say both Cal Fire and the U.S. Forest Service largely continue to embrace an antiquated ‘fight every fire’ ethos.

Leaders in federal land management positions, North says, need to be much more supportive and bold in their use of targeted use of prescribed fire. There needs to be a cultural shift in the public’s understanding about both the inevitability of fire, he says, and a shift within the leadership of these agencies.

“The people who end up getting promoted and often end up in the leadership positions are very good at being cautious,” North says of his own employer, the U.S. Forest Service. “You really need a pretty fundamental and aggressive change to what we’re doing. And that’s not inherently the behavior that you often get in leadership in these in these positions.”

Still, North recognizes the enormous challenge for managers: it’s not popular or easy to intentionally light fires to clear out built-up fuel when states are being ravaged and citizens reeling from annual catastrophic wildfires.

If historically flawed forest management is half the problem here – battling most every fire – the other half is the world’s warming climate with hotter, drier conditions igniting a century of built-up fuel.

“It’s a great example of climate change as a kind of an accelerant,” says Michael Wara with Stanford’s Woods Institute for the Environment. “This is a problem that’s been building gradually for decades. But what is happening this decade is the problem has kind of turned from this thing that we can manage to a monster.”

‘Problem too big for states to solve on their own’

And taming that monster through intentional fire, Wara says, is vital yet costly: It’s estimated that thinning and prescribed burns can cost somewhere between $1,500 and $2,000 per acre.

The problem is simply too big for states to solve on their own, especially since the federal government owns the vast majority of public lands in the West, not the states. 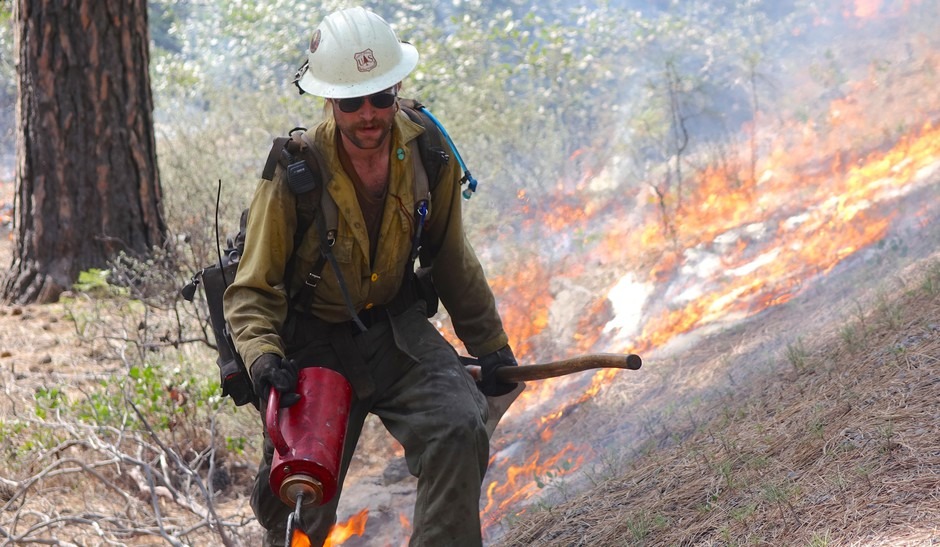 A member of the Wolf Creek Hotshots uses a drip torch to ignite the forest floor during a prescribed burn near Sisters, Oregon. CREDIT: Jes Burns/OPB

“Coming up with the money to do this at scale has always been a major obstacle,” Wara says. “We need sustained federal and state financial support if we’re going to have any hope of moving the needle and bring good fire back into the landscape in a way that will be big enough to actually make a difference.”

Another challenge too big to solve alone is the lack of a trained workforce to prep and conduct more controlled fires. Fire suppression crews remain stretched incredibly thin across much of the West. And putting out fires and setting controlled blazes “really are two different skill sets,” says University of California, Berkeley Fire Science professor Scott Stephens who has long documented the positive impact of fire on the forest eco-system. “So it really does require us to develop that workforce.”

Stephens and other experts in fire ecology want the region to train up an entirely new force, like the one the southern U.S. already has.

“There are so many people in the South that are certified prescribed fire burn bosses and practitioners, and they don’t work in fire suppression at all,” he says adding, “we just don’t have that out here.”

Despite the long, bitter fights in Washington, D.C., over how to manage the nation’s forests there are currently several bills in the U.S. Senate that would significantly boost federal funding for intentional fires. One of them even has a little bipartisan support. And two of the bills call for the creation of a Western U.S. prescribed fire training center to build that much-needed workforce to learn to prep and set fires, not just put them out.

Other big barriers to doing more intentional burns include tough environmental rules and strong liability laws that can slow the pace and scale of set blazes. For example, some intentional burns have taken years to plan and implement.

Then there’s safety. The vast majority of these fires are done without harm to people or property. But not all. A 2012 prescribed fire in Colorado killed three people and damaged or destroyed more than two dozen homes.

Another example is a notorious U.S. National Park Service controlled burn 20 years ago near Los Alamos, New Mexico that got out of control when high winds picked up.

Some 400 family homes were burned. The federal nuclear lab there was threatened, with a few of its buildings damaged. Withering criticism and congressional hearings followed.

“The plan was flawed, the higher ups rubber stamped it, the burn boss was not qualified to do a fire this big,” then-Congresswoman Heather Wilson, a Republican, told a house hearing on the burn shortly after the fire.

That Los Alamos fire kind of became the Enron or Solyndra of controlled burns: a rare but spectacularly botched event that ends up having out-sized influence and ripple effects. Twenty years on, the Los Alamos debacle is still felt today across federal land agencies.

It’s a ghost that needs to be exorcised, ecologists say, because controlled burns are largely safe.

“The perception there is definitely far different than the reality, which is that the fires generally have been able to be controlled,” says the Forest Service’s Malcolm North.

For fire-ravaged communities the hard truth is that these shifts to increase controlled blazes and reduce catastrophic fire risk will take years, if not decades, of sustained effort.

“So that’s the real problem because, you know, it isn’t something that you can invest in wholeheartedly, say, in three years and guarantee yourself a result,” says UC Berkeley’s Stephens. “It would take a 10-year effort, but probably even closer to 20 to really start to change kind of the fundamentals” of wildfire risk.