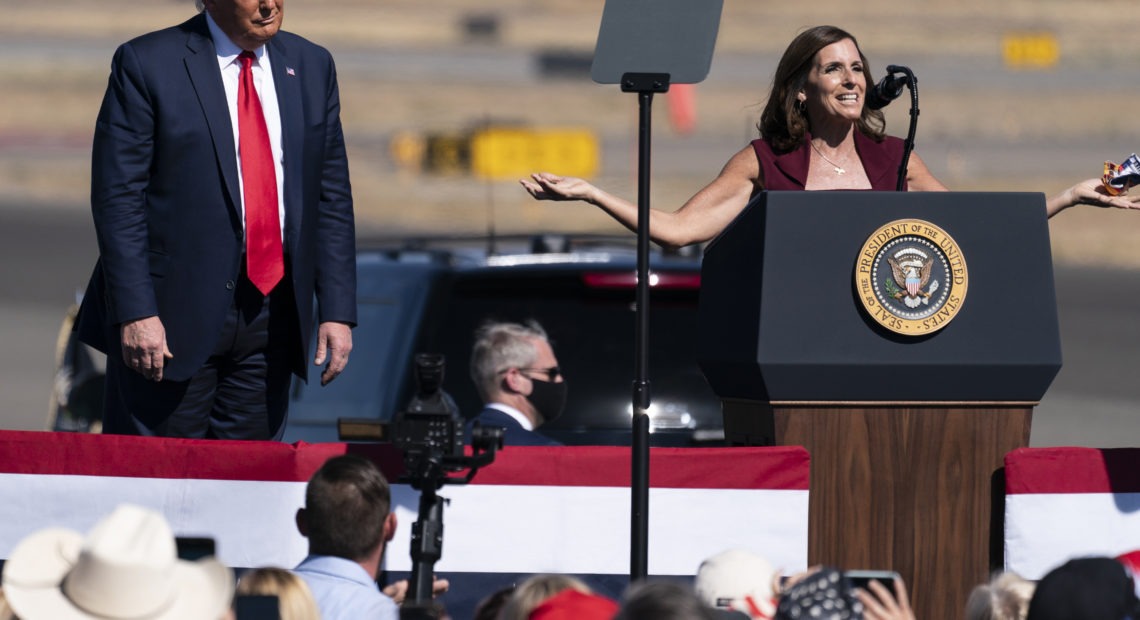 The 13 Races That Will Determine The Senate Majority

Republicans hold the Senate 53-47. (There are two independents — Angus King of Maine and Bernie Sanders of Vermont — but they caucus with Democrats and therefore should be counted that way in the math for Senate control.)

To flip the Senate, Democrats would need to net-gain four seats outright or three seats and control of the White House, because in a 50-50 Senate — which is possible this year — the vice president breaks the tie. Republicans can lose up to three seats and hold the majority, as long as President Trump wins reelection. 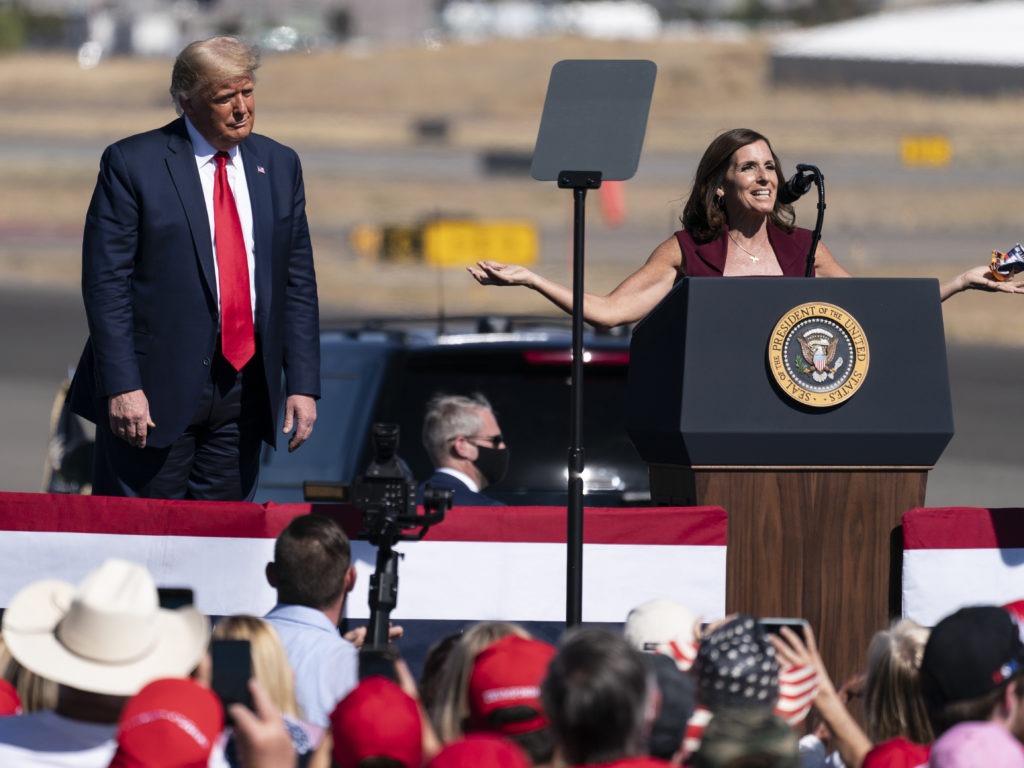 President Trump campaigned with Sen. Martha McSally, R-Ariz., in Prescott, Ariz., this month. McSally is a top target of Senate Democrats, who are hoping to flip her seat blue on Election Day. CREDIT: Alex Brandon/AP

Democrats are forecast to gain two to six seats. Control of the Senate remains a jump ball days out from Election Day. These are the races that will decide it:

Alabama: Sen. Doug Jones is the only Democratic incumbent in a tough race this year. He is expected to lose to former Auburn University football coach Tommy Tuberville, the Republican challenger. Trump remains wildly popular in Alabama, and it would be very difficult for Jones to overcome that advantage in a nationalized political climate. A Republican pickup here would mean Democrats would need to pick up four GOP-held seats and win the White House for Senate control.

Arizona: GOP Sen. Martha McSally is running against Democrat Mark Kelly, the popular and well-known former astronaut turned gun control advocate after the 2011 Tucson shooting of his wife, then-Rep. Gabby Giffords, D-Ariz. Kelly has led in all but one public poll in 2020. Kelly has also significantly outraised McSally.

Colorado: Republican Sen. Cory Gardner is running against former Gov. John Hickenlooper, a former 2020 Democratic presidential candidate. Hickenlooper initially indicated he was not interested in a Senate run but jumped in after his presidential campaign faded. He has run a lackluster campaign, but the overall Democratic pull of the state is probably enough to carry Hickenlooper to victory.

Iowa: First-term GOP Sen. Joni Ernst is running against real estate developer Theresa Greenfield. This race has gotten increasingly competitive in the closing months of the campaign. Ernst had been the early favorite for reelection, but the race has become a toss-up in the close.

Maine: Republican Sen. Susan Collins is running against Democrat Sara Gideon, the state’s House speaker. Few others have seen their political stock fall as fast as Collins has. Once one of the most popular senators in the U.S., she now ranks at the bottom. The polarization of the Trump era has done no favors for centrist moderates. Collins is a savvy campaigner and knows her state and how to win, but Gideon has been able to capitalize on Collins’ sinking political clout and anti-Trump sentiment.

Montana: Republican Sen. Steve Daines is running against term-limited Democratic Gov. Steve Bullock, arguably the only Democrat who could make Montana competitive for the party. Bullock is well-known and has generally been given decent marks by voters for his handling of the coronavirus pandemic. Montana is a red state that wants to stay that way, and that helps Daines. A Bullock victory would be a telling sign of a broader Democratic wave.

North Carolina: Republican Sen. Thom Tillis is running against attorney Cal Cunningham, a former state senator. This is widely viewed as the tipping-point race — whoever wins here will likely represent the party in control of the Senate. Cunningham had all the advantages, but late-breaking reports of marital infidelity will test whether old-school political scandals still register with voters.

Alaska: GOP Sen. Dan Sullivan is running against orthopedic surgeon Al Gross, who is technically an independent but will appear on the ballot as a Democrat. Trump won Alaska by 16 points in 2016, and Sullivan should be able to pull out a win. But Gross has run a surprisingly strong campaign aided by waves of grassroots Democratic fundraising, including after the death of Justice Ruth Bader Ginsburg. There isn’t regular or reliable polling in this race.

Georgia 1: Republican Sen. David Perdue is running against Democrat Jon Ossoff, best known for running and losing a high-profile 2017 special election for a U.S. House seat. Perdue has been a Trump loyalist in a state that is increasingly more purple than red. Republicans are bullish that Perdue can win reelection, but the risk of a Jan. 5 runoff is real unless a candidate wins at least 50%. A third-party candidate, Libertarian Shane Hazel, is complicating that path.

Georgia special election: Appointed GOP Sen. Kelly Loeffler is running to serve out the term of former Republican Sen. Johnny Isakson, who retired early for health reasons. Loeffler is a wealthy businesswoman. If no candidate gets at least 50% — which is unlikely — the top two vote-getters go to a Jan. 5 runoff. Loeffler has to fend off both a Republican challenge from Rep. Doug Collins and the top expected Democratic vote-getter, Raphael Warnock. Warnock is a civil rights leader and pastor at Ebenezer Baptist Church in Atlanta, the same church where Martin Luther King Jr. served. If control of the Senate comes down to Georgia, it might not be known until January 2021.

Kansas: This is an open-seat race because Republican Sen. Pat Roberts is retiring. Republican Rep. Roger Marshall is running against doctor and state Sen. Barbara Bollier. Marshall is the GOP establishment’s pick and is favored to win. Bollier is a Republican turned Democrat who has focused on her medical background during the pandemic.

South Carolina: Republican Sen. Lindsey Graham is running against former Democratic congressional aide Jaime Harrison. Trump won South Carolina by 14 points in 2016, and Graham has transformed from Trump critic to Trump champion since then. Harrison has been able to turn a long-shot bid into a well-funded campaign that is polling competitively. The conservative roots of the state keep Graham as favored to win. A loss could be an indication of a massive Democratic-wave election.

Texas: Republican Sen. John Cornyn is favored against Democratic challenger MJ Hegar and has consistently led in public polling. A Democratic victory here would be a major upset and would likely be contingent on a surprise Joe Biden win in the state. Texas is also seeing a surge in voter turnout across the state, fueling Democratic hopes that the polls are wrong and 2020 is the year Texas goes blue.