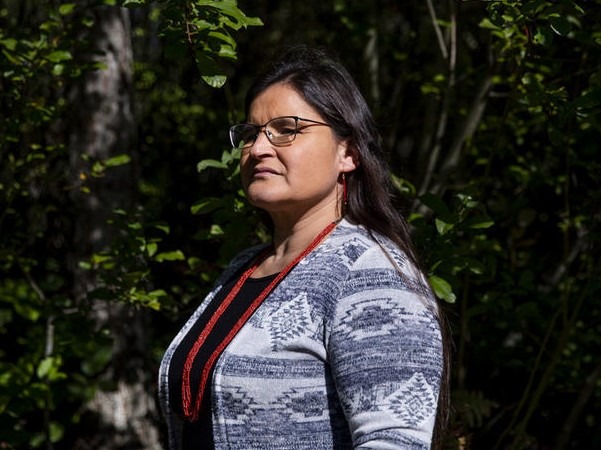 Montoya-Lewis did not take this advice.

“My view has been since the moment I decided to apply for this position, I’m going to be who I am,” she says. “If Gov. [Jay] Inslee or the public doesn’t embrace that, that’s OK, but I can’t pretend to be someone other than who I am.”

It made sense that she didn’t have “the look” of any judges before her. When she was appointed last December, she became the first Native justice in the Washington state Supreme Court. An enrolled member of the Pueblo of Isleta tribe, she was only the second Native justice in any state supreme court at the time of her appointment.

“I’ve had people say, ‘You don’t look like a judge,’ and they’ve said that in lots of different ways,” she says. “'[But] I do look like a Supreme Court justice, because I am one.”

Native representation in federal courts, and government as a whole, is scarce. Of the 870 Article III judges in the United States, only two are Native (and one of them has been inactive for years). Meanwhile, Native people are vastly overrepresented in the country’s criminal justice system, with data indicating that American Indians/Alaska Natives are incarcerated at twice the rate of white Americans.

Last week’s state elections offered some hope for improvement. Montoya-Lewis ran for reelection to keep her seat, beating her opponent, Dave Larson, by nearly 20 points. Candidate races for justice positions like this don’t frequently capture the spotlight during election season; a Northwest Progressive Institute survey of Washington state voters in May found that nearly 80% of them were undecided in this race.

But with the passing of Supreme Court Justice Ruth Bader Ginsberg and the confirmation of her successor, Amy Coney Barrett, Montoya-Lewis says she’s hearing more conversations highlighting the importance of state supreme courts in shaping law and addressing inequities.

“It really has been only recently that I’ve seen the judiciary recognize that and want to take a leadership role in that area,” she says. “That’s absolutely something that I think is a critical part of what a supreme court does and should be doing —  in terms of talking about [this problem] and acknowledging that it exists, but also being a problem solver.”

The face of the court

In the United States, nearly 3 million Native people make up about 1.6% of the country’s population. This isn’t proportionally reflected in the federal judiciary. Joel Williams, a Cherokee senior staff attorney with the Native American Rights Fund, says that there have been fewer than a handful of Native Article III judges in the federal judiciary’s history.

“At any given time, if our population was reflected in the federal judiciary, we’d have 14 or 15 judges sitting on the bench,” he says. “There’s a real issue of diversity in the federal court system.”

Advocates who’ve sought changes to the country’s justice system will say the significance of this disparity goes beyond a simple lack of diversity. The Native American Rights Fund says it’s common for nominees to the U.S. Supreme Court to have limited experience with Indian law, which covers a wide range of issues from tribal sovereignty to land and water rights. The U.S. Supreme Court has ruled against tribal members and nations 72% of the time in the past three decades, according to High Country News. One notable departure from this trend is the ruling to re-enforce Native rights in McGirt v. Oklahoma, led by Justice Neil M. Gorsuch.

Williams says the knowledge of justices and their decisions have a massive impact on Native nations.

“I think that a lot of people, in the general public and among lawyers, don’t understand how much the everyday lives of Native people and tribes are shaped by federal court decisions,” he says. “It’s extraordinarily important that the judges making these decisions have a good understanding of federal Indian law, have experiences and backgrounds that give them context for the cases that are in front of them.”

After a series of decisions that severely impacted tribal sovereignty in 2000, tribal leaders from across the country started the Tribal Supreme Court Project, which is staffed by Native American Rights Fund, to strengthen tribal sovereignty advocacy before the U.S. Supreme Court. Since then, the fund has worked to improve education of federal Indian law at all levels and promote the hiring of Native judges.

“One of my concerns is always that when people don’t have or aren’t given an actual education in an area, a proper historical context for example, then those gaps tend to get filled in by stereotypes, right?” Williams says. “So you can see how that can lead into some really bad decisions.”

Montoya-Lewis says her identity is part of the reason she described herself throughout her campaign as a voice for underrepresented people.  When she wrote the decision for an Indian Child Welfare Act case this past summer, she drew on her life experience. Every generation of her family going back to the 1800s has had members raised in a form of institutional care. It’s a common story among Native people.

“Every single family in my years of tribal court work had a story to tell about that,” she says. “I know what that intergenerational trauma looks like and what the consequences are. If I have the ability in this position to give a voice to that story, I’m going to take it.”

This statement was a sticking point for her opponent, Larson, who questioned it during a candidate debate leading up to election day. He asked: “When you say that you’re the voice of the Native American and the underserved, how are people that … are on the other side of a Native American case, a case involving a tribe, or a case involving the underserved going to feel that you’re fair and impartial?” (Crosscut reached out to Larson, but he did not respond by publication time.)

Montoya-Lewis doesn’t see this as proof that she can’t be objective and fair as a judge. Similar questions have peppered her professional life before.

“The assumption has been, throughout my entire career, that because I am not white that I am not fair or I am not neutral,” she says. “I’m not afforded the presumption of neutrality or objectivity that my colleagues are — I have to prove that I am neutral or objective.”

Montoya-Lewis says she’s dealt with complexities as a judge both outside and within her own community. She recalls a case with the Pueblo of Isleta years ago, where tribal officials asked whether she would potentially dismiss an active lawsuit from a member against the tribe. She refused to answer the question, and shortly after, the tribe fired her as a judge and disenrolled her as a member, citing discrepancies in her family history with their blood quantum requirement. This decision triggered the disenrollment of others in her family as well.

This meant losing her rights as a tribal citizen, including voting in tribal elections or owning property on the reservation. She remained disenrolled from her tribe for 15 years, regaining her membership in 2018 only after the tribe changed their requirements for membership.

“It’s hard to describe, I think, for people who aren’t Native people,” she says. “But when you’re told by your community that you’re not wanted, it’s extremely painful.”

So in response to Larson’s question, she says her record speaks for itself.

“The difference is that I bring a perspective that hasn’t been seen on this court before, and that changes the conversation,” she says. “That makes our work and our thinking more complex, and ultimately better.”

A wave of ‘firsts’

As a kid, Montoya-Lewis never imagined herself as a lawyer — she didn’t even meet one until attending law school at the University of Washington.

She says she wasn’t the best student when she arrived, either. Her classes confused her for the first several months, and she often felt as though her teachers were speaking a foreign language. It’s something she talks about openly now.

“It’s important to talk about that experience and, to a certain extent, normalize it,” she says.

At the time, she hadn’t planned to be a judge. She was hoping to apply criminal justice theory to academia, and she succeeded, eventually working as an associate professor at Western Washington University for over a decade. 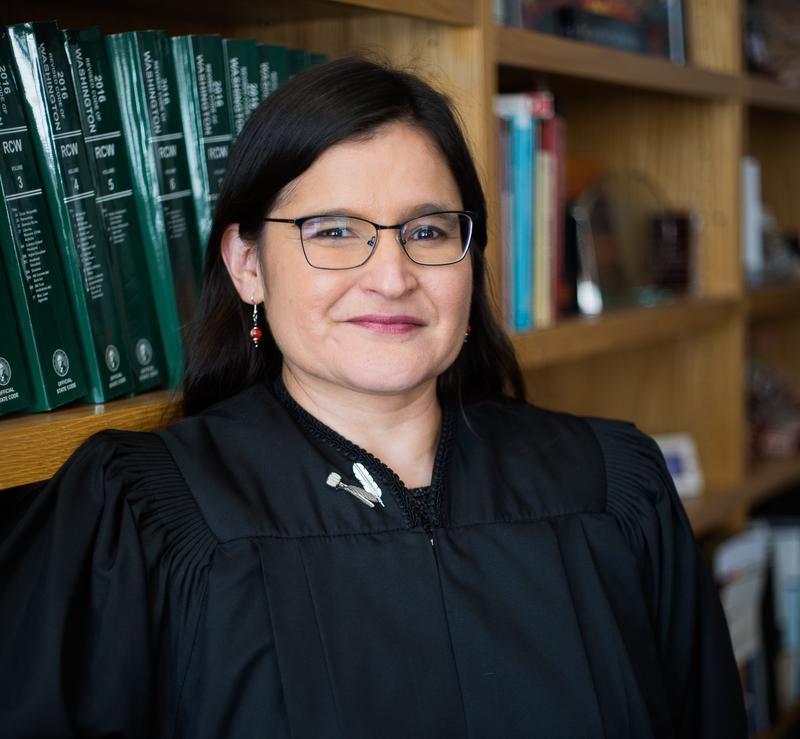 Judge Raquel Montoya-Lewis was appointed in 2019 as the first Native American justice to serve on the Washington Supreme Court. She won election in November 2020. Courtesy of office of Gov. Jay Inslee

But alongside that, just three years out of law school, the Pueblo of Isleta in New Mexico asked her to oversee a trial. Everything changed after that. By the time she applied for a justice position on the state Supreme Court last fall, she had worked as a judge in tribal and state courts for over 15 years. This is an unusual path for a judge, she says, but the story of her career has never been the usual — and she hopes that example makes it easier for others to climb the ranks as well.

“I think that it’s part of my obligation that I do whatever possible in this position to encourage other people who are otherwise underrepresented — whether that’s communities of color, first-generation college students, people from poor communities — to picture themselves in roles that have otherwise been closed to them,” she says.

Since Election Day, there has been an unprecedented wave of Native candidates who’ve made it into public office: As Indian Country Today reported, six of the 13 Native candidates vying for U.S. House seats won, creating a record number of Native members of the House. Many, like Montoya-Lewis, are the first Native person to take up their elected position in their state.

These changes, especially those within courts, make Williams a little more optimistic. Although Indian law is largely influenced by federal courts, he says that parts of it frequently appear before state supreme courts, too. In recent years, some of the most prominent have been related to the Indian Child Welfare Act. The aforementioned McGirt v. Oklahoma also began in state court systems.

“That’s an area that gives me a lot of hope,” Williams says. “A few years ago, there were no Native state supreme court justices. But also… Indian law aside, having those opportunities for Native American attorneys and for them to have those career opportunities to serve, to engage in that kind of public service, is incredibly important as well.”

With her campaign won, Montoya-Lewis says she’s eager to dig deeper into her work. An internal sense of urgency drives her to continue performing her job well — exceptionally well, she says. She remembers her father telling her that she’d have to work three times as hard to be seen as average, and she’s seen the truth in that over the years.

But she says it shouldn’t have to be this way. What she wants most is to break that status quo for good.

“I’m not in this because I want to be in the history books as someone who was the first,” she says. “That matters, and it matters to a lot of people. But what really matters to me is that I not be the last.”