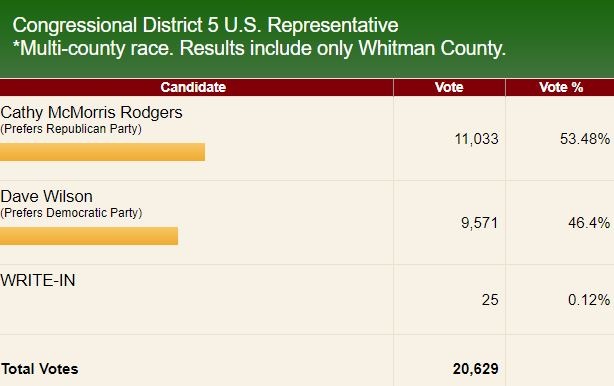 Though Whitman County stands out as more blue in a bigger sea of red east of the Cascades. But there’s a notable exception for Congress.

Whitman was the only county east of the Cascades to vote Democratic for president and governor – this year and in 2016. That’s largely because of it being home to the main campus of Washington State University in Pullman.

But even in a county that generally supports Democrats for governor and president, Republican Congresswoman Cathy McMorris Rodgers won. In fact, she got more votes in Whitman County than Jay Inslee did for governor.

WSU political scientist Travis Ridout says even in a county that leans blue, the incumbent’s advantage for name recognition and fundraising is very much in play. And therefore Democrat Dave Wilson didn’t really stand a chance against McMorris Rodgers, who’s been in office since 2005.

“He wasn’t able to raise a lot of money. And so wasn’t able to spend a lot of advertising and get his name out there,” Ridout said on a recent episode of NWPB’s Uniquely NW News program. “People aren’t going to vote for people they’ve never heard of.”

Though Washington’s 5th District doesn’t always go for the incumbent. It is, after all, home to one the largest Congressional upsets ever. In 1994 Speaker of the House Tom Foley lost during the Republican Revolution that brought Newt Gingrich to power. It was the first time since the Civil War that a sitting House speaker lost. Republicans have held the 5th District seat ever since.

(Edited for length and clarity.)

On whether this year was somehow politically unique or just normal politics cranked way up:

I think more of the latter than the former. One thing I study is political advertising and there was more political advertising this year than any past presidential campaign before. And that started in the primary races with Michael Bloomberg and Tom Styer, spending multi millions, hundreds of millions on advertising and continued through the general election. The Biden campaign almost had more money than it could spend at the end of the race. And if you lived in Tampa or Phoenix, just about every ad you saw on television would have been a political ad.

On how, and whom, the incumbent’s advantage helps in elections:

Generally it’s a pretty big income and advantage, though that depends on the race. We think the lower down the ballot, the larger the incumbent advantage is. And there are a few explanations for this incumbent advantage. One is just name recognition. We tend not to vote for people that we’ve never heard of before. And that incumbent we’ve generally heard of before because they’ve won because they get that media coverage. There’s also kind of this self-fulfilling prophecy, donors expecting incumbents are going to win, so they give them money and thus incumbents generally have more money to spend than the challengers. All this said, there’s also some evidence that the incumbency advantage is declining at the national level, say in races for Senate or for the U.S. house. And that’s because we’re more polarized than we used to be. There used to be Democrats who on occasion would vote for Republican and vice versa. And those types of individuals have almost disappeared.

On the advantage for Republican Rep. Cathy McMorris Rodgers in eastern Washington’s 5th District, even in Whitman County which votes for her but also Democrats for governor and president:

I think by and large that difference you’re seeing is an incumbency advantage. The fact that Morris Rogers did a lot better in Whitman County than did Jay Inslee, for instance or Lauren Culp, a Republican nominee for governor. And, we’ve all heard of Cathy McMorris Rodgers living in this area. She’s been in Congress for a very long time now, whereas few have actually heard of her democratic opponent Dave Wilson, he wasn’t able to raise a lot of money, and so it wasn’t able to spend a lot on advertising and get his name out there. And so again, people aren’t going to vote for people that they’ve never heard of before. And it’s also just the fact that this congressional district is there are a lot more Republicans living in the 5th District of Washington than there are Democrats. That may not be true in Whitman County, but the district taken as a whole is a Republican district. So that in itself, I think helps to explain McMorris Rodgers popularity, and her pretty big win this year.

On why Washington or Idaho aren’t more like other states in the Midwest or East Coast, where it’s more common to have the state vote one way for president and but have governors or more statewide elected officials who are of a different party.

I think there are a couple of reasons for that. One is that we vote for a governor in Washington the same time we vote for a president, and thus there may be some almost presidential coattails there. People tend to link those votes, whereas it might be less so if we voted in a midterm election year, so this national trends matter. I do think a Republican could win governor in Washington but it would take first of all, a pretty moderate nominee and the Republican Party of Washington as they lost kind of legislative seats in those suburban districts around Seattle, it’s become a much more conservative party and that’s been reflected and their nominee this year Lauren Culp from eastern Washington and not the type of moderate that you would probably need to win statewide. I think the other thing you’d need to see for a Republican to win in Washington is some sort of political scandal or political crisis coming out of Olympia where people are saying, “We really need some change. Things are not going well in this state.” And I think the Democrats have been lucky over the past few elections and that there hasn’t been a crisis. And so people have in general voted their partisanship. And we could probably paint a similar story for the state of Idaho as well (for Democrats winning statewide).

On whether political advertising is fundamentally different now compared to past elections other than just a lot more money involved:

The big story this year is a lot more money – more money than any other presidential race. But there are some differences. One difference is that a greater percentage of that ad spending is going to digital advertising, so ads that we see on websites or on social media platforms like Facebook and YouTube. And so, although some people suggest that a lot of that spending is actually going to raising money that is used to buy political ads on television. A few other differences this year: it’s actually believe it or not less negative than in the past few elections. And we also saw a huge Democratic advantage in terms of ad spending just across the board in House races, Senate races, the presidential races.

On whether this may be a high water mark year for Democrats or Republicans or both for voter participation:

I think the big question for me right now is whether this is kind of a Trump phenomenon. Is there something fundamentally different about politics with Donald Trump on the ballot, his ability to draw this turnout to make Republicans come out and Democrats come out and vote, or would we have seen this high turnout if there were say a generic Republican on the ballot with the same state of the economy and so forth. I don’t think we can return to a politics of the 1950s for instance, but I think the big question for me is whether 2024 in the presidential election will look like 2020 on steroids, or it’ll go back to maybe something that we’ve seen in the past. More like 2012 with perhaps some more generic candidates who don’t draw the level of love and anger like Donald Trump draws.