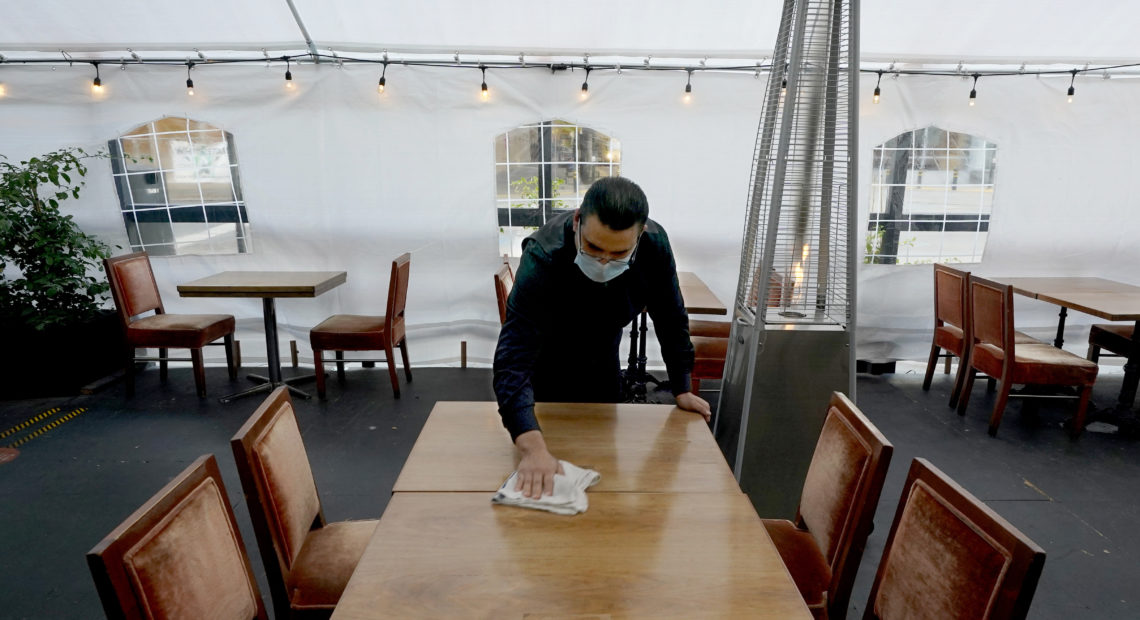 U.S. employers sharply scaled back their hiring last month as the coronavirus pandemic put new pressure on restaurants, retailers and other businesses.

The Labor Department said Friday that employers added just 245,000 jobs in November, down from a revised 610,000 in October.

The job growth figure was well below expectations. Economists at Wells Fargo had expected the United States to add just 425,000 jobs in November, while other forecasts pointed to just under half a million.

The unemployment rate dipped to 6.7%, from 6.9% the month before, largely because 400,000 people dropped out of the workforce.

So far the U.S. has recovered 56% of the jobs that were lost in March and April, and payroll employment is still 9.8 million below its pre-pandemic levels. 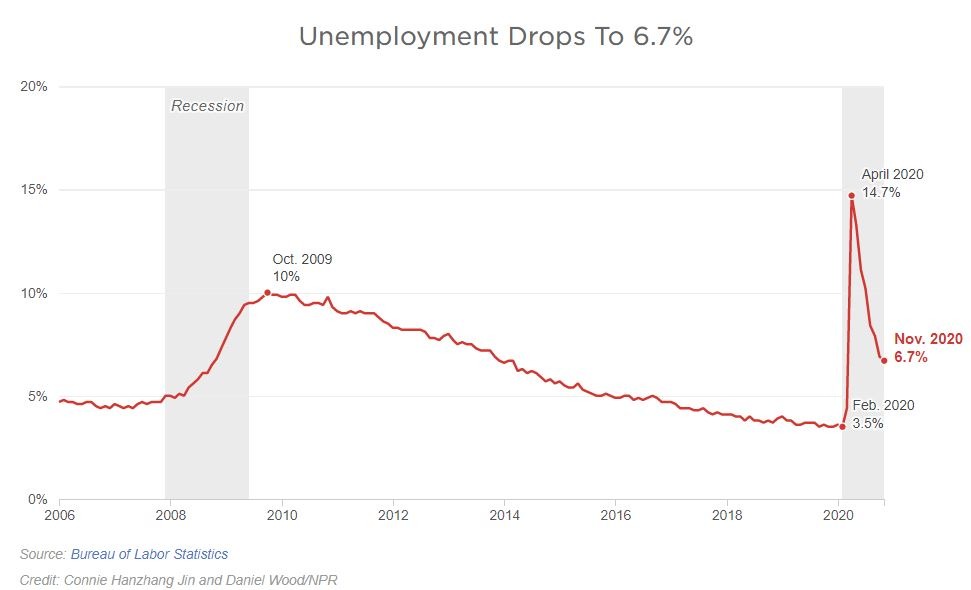 The slowdown in job growth comes as new infections are surging and as Congress wrestles with whether to extend relief measures currently set to expire the day after Christmas.

This week, the United States set a record with more than 100,000 people hospitalized with the coronavirus. More than 200,000 new infections were diagnosed on Thursday, and nearly 3,000 people died that day from COVID-19.

Government restrictions aimed at slowing the spread of the virus forced Cameron Mitchell to shutter nearly 20% of his restaurants last month and to furlough 700 workers. With customers increasingly nervous about eating out, Mitchell’s remaining restaurants have suffered a steep drop in sales.

“Our managers are working for reduced pay. Our hourly people are not getting the hours they want or they’re laid off,” said Mitchell, who operates 55 restaurants in 13 states. “Our company is losing a million to $2 million a month. And we can’t sustain for much longer at that pace.”

Nationwide, bars and restaurants cut 17,000 jobs last month. The pandemic has taken a toll on other industries as well.

Job listings at the website Glassdoor fell 2.5% between October and November. That was the first such decline since May, and the drop was widespread among different parts of the country and different sectors of the economy.

“That doesn’t mean we’ve gone over the cliff yet,” said Glassdoor’s senior economist Daniel Zhao. “But there are definitely some warning signs flashing.” 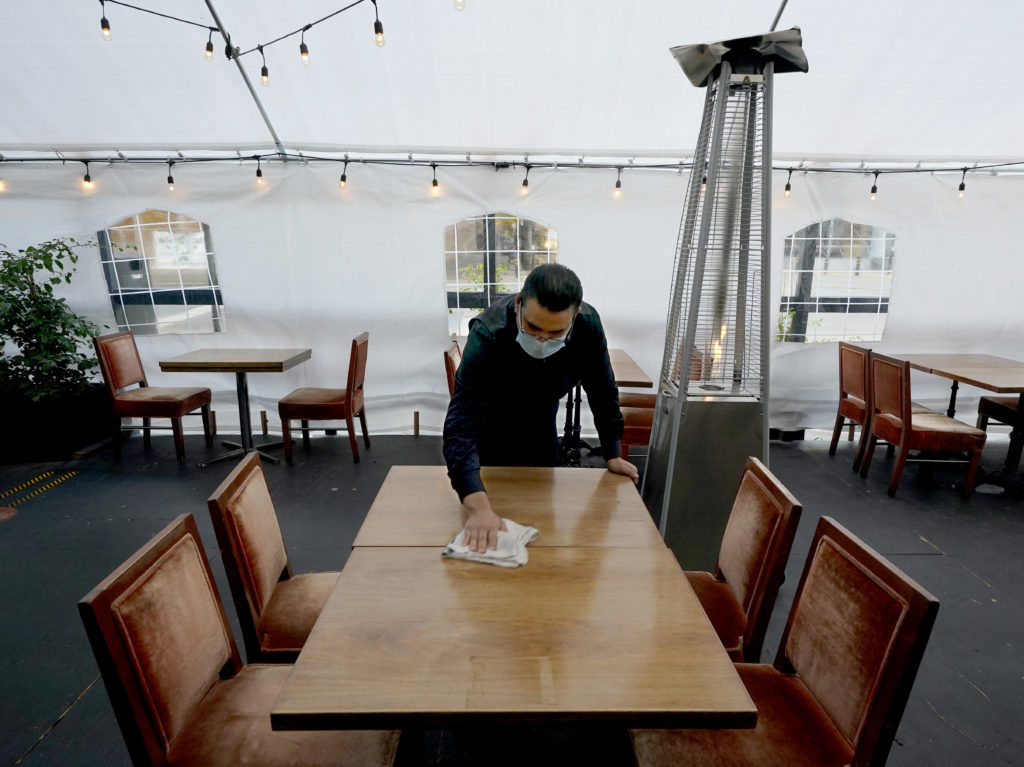 Fabian Rodriguez cleans a table in an outdoor tented dining area of a restaurant in Sacramento, Calif., on Nov. 19. Job growth slowed sharply in November as relief aid is due to expire at the end of the year. CREDIT: Rich Pedroncelli/AP

The Census Bureau cut another 93,000 temporary workers in November as it wound down its once-a-decade head count. Local governments cut 21,000 jobs in education.

Federal Reserve Chairman Jerome Powell warned lawmakers this week that without federal help, state and local governments are likely to see additional job cuts in the months to come.

“State and local governments are one of the very largest employers in the country and they provide those critical services,” Powell said. “That was a big part of the story in the slow recovery from the global financial crisis a decade ago.”

The slowdown in hiring is especially worrisome for millions of Americans who are out of work and at risk of losing their financial lifeline later this month, when emergency unemployment benefits are set to expire.

Congress has been discussing a possible extension of those benefits, but no agreement has been reached yet.

The holiday shopping season typically creates job opportunities in retail. Zhao said this year, many of those jobs are in warehouses or as delivery drivers, as customers increasingly shift their gift-buying online.

The Labor Department report, which is adjusted for seasonal hiring patterns, shows a net loss of 35,000 retail jobs, but an increase of 145,000 jobs in transportation and warehousing.

While there are some openings in traditional brick-and-mortar stores, they may not be easily filled.

“Even in a time of high unemployment, workers are hesitant to return to in-person roles where the health risks might be higher,” Zhao said.

New vaccines offer hope that the pandemic could be tamed sometime next year, but widespread distribution of the shots is still months away.

“The good news is, we know recovery is on the way with the vaccines,” said Mitchell, the restaurant operator. “We just need to get from here to there, and Congress needs to help provide that bridge.”