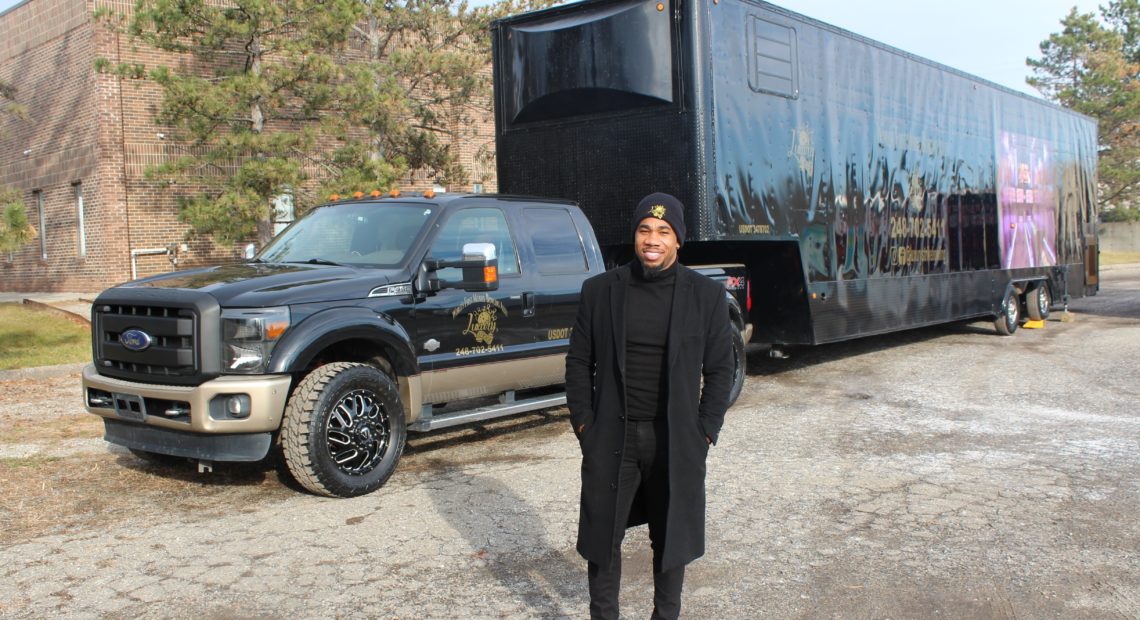 Entrepreneur Launches Bowling Alley On Wheels During The Pandemic

A black semitruck is parked in front of a nondescript office building in Southfield, Mich., on a recent crisp fall afternoon.

“You’re looking at a state-of-the-art facility,” says Terence Jackson Jr. as he enters the vehicle, dressed in all black. “When you come inside, you just forget that you are actually in a trailer at all.”

Jackson, 34, is the CEO and owner of Luxury Strike Bowling. His company’s trailer is what he calls “the world’s first mobile bowling alley.”

In Michigan, restaurant dining, bars and bowling alleys are closed for the second time since the spring because of the coronavirus. Jackson’s venture, conceived prior to the pandemic, couldn’t be more perfect right now. His rentable private bowling alley on wheels offers a unique entertainment alternative when the novelty of Zoom parties has worn off. 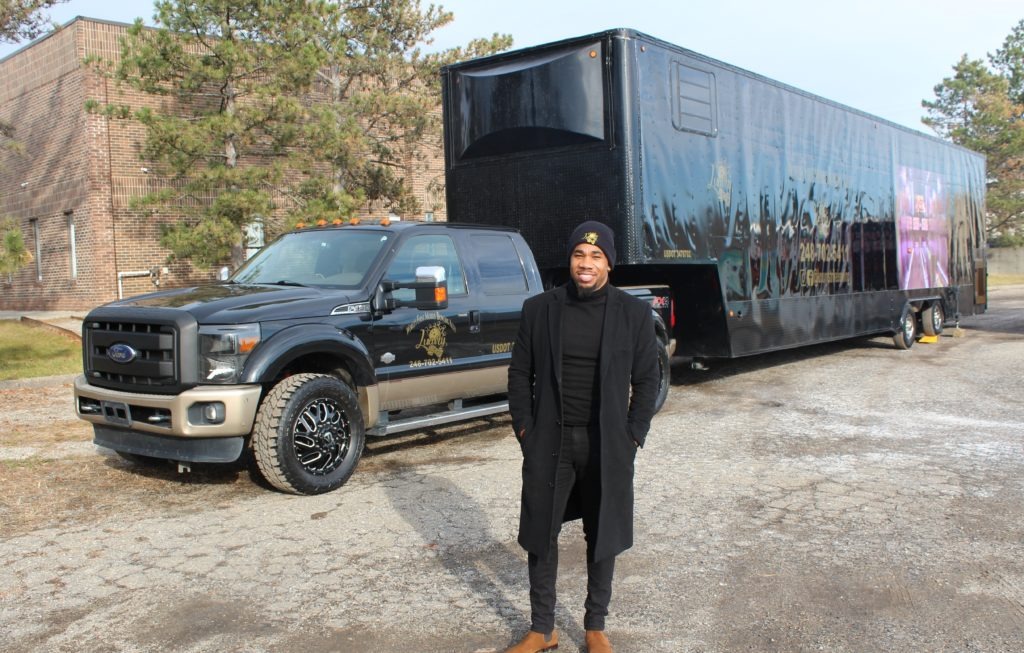 Luxury Strike CEO Terence Jackson Jr. came up with the concept two years ago and funded the venture by selling a couple condos he owned and pretty much all of his assets.
CREDIT: Laura Herberg/NPR

The trailer includes two 25-foot lanes, an automatic ball return, automatic pin-resetters and even digital scorekeepers. It is, however, not 100% regulation bowling. To better accommodate the space, the balls here weigh about 3 to 4 pounds (as opposed to up to 16 pounds for typical bowling), are about the size of a grapefruit and don’t have any holes. It’s like duckpin bowling, except the pins aren’t fat.

As for the vibe, it looks like a nightclub inside this mobile bowling alley. The walls are painted black and flashing neon lights line the lanes and ceiling. At the back of the truck, a staircase leads up to a seating area with a black, pleated booth.

“It is a custom diamond-stitch booth. Somewhat like what you would see in a Bentley,” Jackson says.

Above the booth a sign on the wall says in red glowing letters: “Bet on Yourself.”

Jackson used to build party buses. That’s what started him down this path. Inspired by convenience apps like Uber and Grubhub, and novel vehicles like arcade trucks and ax-throwing trailers, Jackson wanted to package up a sport for the masses.

“The only sport you can’t package up and take home with you is bowling,” Jackson says. Plus, he felt like bowling appeals to a large demographic.” At any age, someone will try to bowl,” he says.

Jackson came up with the concept two years ago. To fund the venture, he sold a couple condos he owned and pretty much all of his assets.

‘We haven’t had any problems’

“People said I was crazy. People said, ‘Why would you sell your house, your real estate and basically be homeless?’ But I had a vision,” Jackson says.

He designed and outfitted the trailer himself at the beginning of the pandemic in March. He says it cost him about $300,000. But when Luxury Strike finally launched in June, Jackson says the mobile alley was soon booked solid for months. 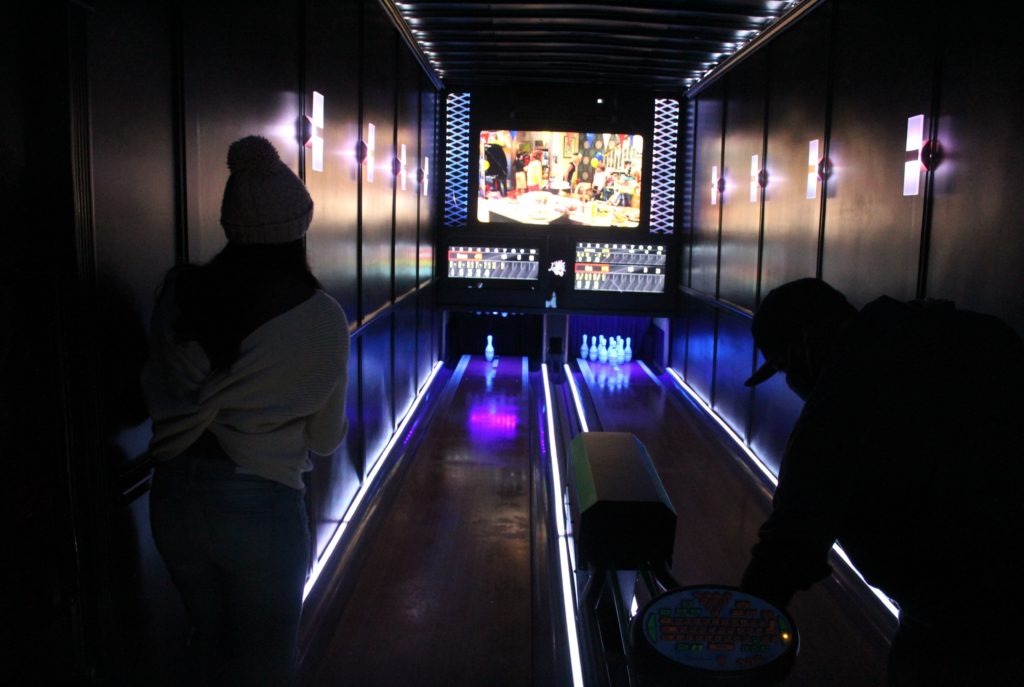 Once booked, the mobile bowling alley is driven directly to a guest’s house or to a parking lot of their choice within a 30-mile radius of Southfield ,where the company is based (though Jackson has allowed rentals as far as 75 miles away for an additional fee).

The balls, the pins, the scoring are all included in the fee, and guests don’t need bowling shoes. Plus, partygoers can connect their phones to the speaker system, select what they want to watch on the big-screen TV that’s inside the space, and even control the speed of the flashing neon lights. Food and smoking are not allowed in the trailer, but guests can bring their own booze. Cups, ice and napkins are provided.

In terms of keeping things safe during the pandemic, Jackson says the trailer is thoroughly sanitized before and after each event, and there are hand sanitizers on-site. Plus, his staff of two – the drivers, who double as lounge assistants — always wear a mask. “We haven’t had any problems at all,” Jackson says.

Arthur Clabon, one of the drivers, says he likes cruising around in the big, long truck emblazoned with a sign saying, “The world’s first mobile bowling alley” on the side.

“It looks bigger inside than it does in the pictures,” says Sharise Crumley of Southfield, a recent guest. “Even the little bowling balls are cute!”

Crumley saw the mobile bowling alley on social media and booked it for her friend’s 35th birthday because it looked like a fun, responsible way to celebrate.

“Even when we were allowed to go out to eat and go to bars, you don’t really feel as safe. So now when you have a venue where you can book it and it’s just the group of people that you invite, you feel safer,” Crumley says.

“I would have never thought about something like this. This is absolutely great,” Vasquez says. “And to be honest with you, it’s even better because we never thought we would go through a pandemic. So, it’s perfect for right now!”

Jackson, the founder, believes that his mobile bowling alley isn’t just perfect for right now but that it will fill a void for years to come. Indeed, he’s betting that it will. He’s already working on a second mobile alley, which he hopes to roll out next year.

“I’m a real entrepreneur guy, and I feel like the world is ran by entrepreneurs,” Jackson says. “I think if you want more Black bosses, we have to have more Black businesses.”

Jackson says he hopes his successful entrepreneurial effort will inspire others to take risks, start their own businesses and bet on themselves, like he did.

“For us to move forward and be a more powerful people, we would have to create more things,” he says.

“We have to become bosses instead of consumers. And I just hope and wish that as I continue that I inspire more and more people to jump off the porch and let’s make it happen.”