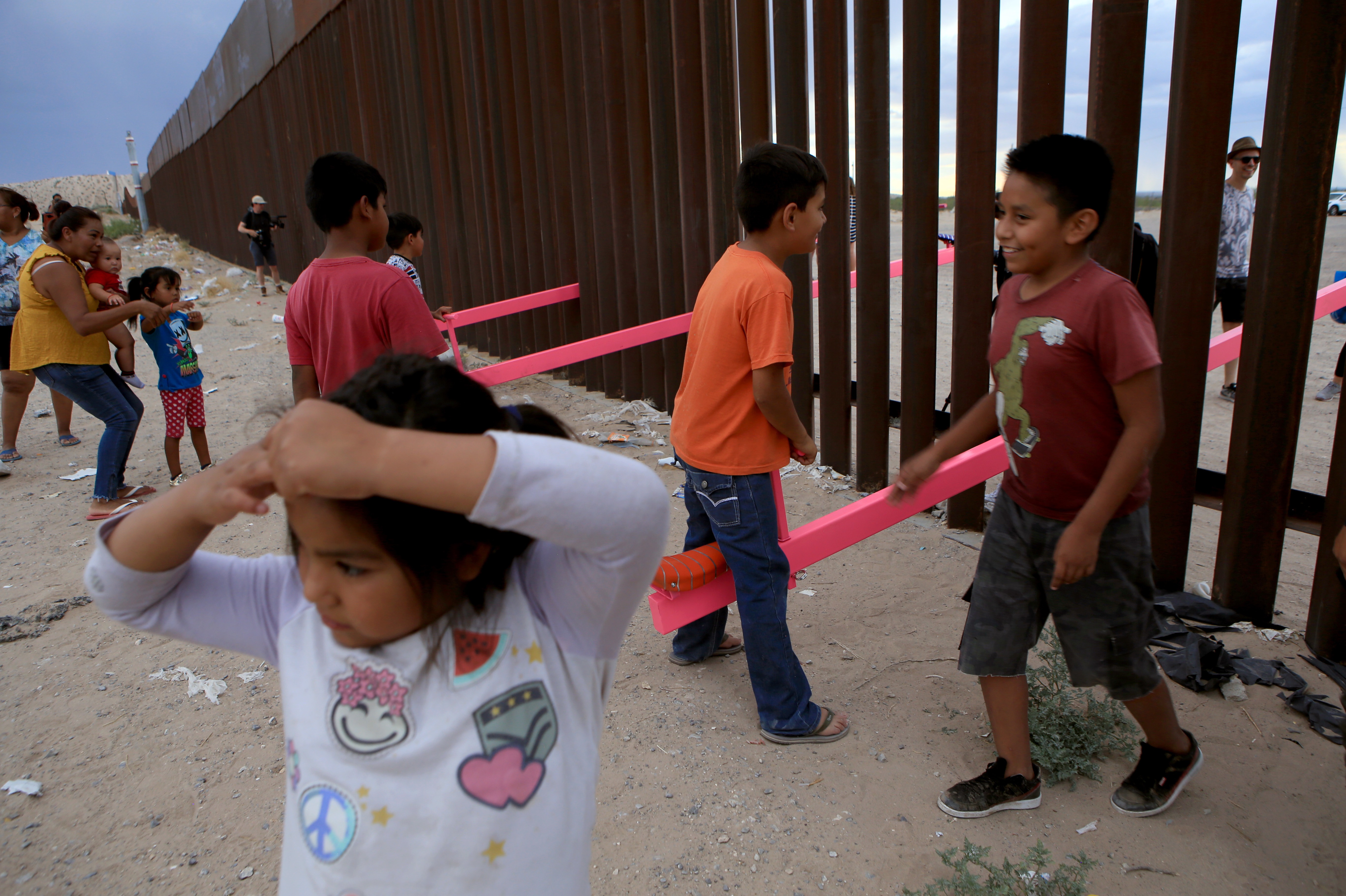 An art project that turned the border wall at the U.S.-Mexico border into the temporary base for pink seesaws – inviting children on each side to come play together – has won the London’s Design Museum award for best design of 2020.

“We are totally surprised by this unexpected honor,” said Ronald Rael, who designed the project with fellow architect Virginia San Fratello. They share the award, he said, with the Ciudad Juárez, Mexico-based art collective Colectivo Chopeke.

“That’s amazing,” San Fratello said in a video feed announcing the prize. The seesaw installation won both the overall prize and in the transportation category.

American and Mexican families play with a see-saw installation at the border near Ciudad Juarez, Mexico, in July of 2019. The project has been recognized by a prestigious design award. CREDIT: Luis Torres/AFP via Getty Images

“Most importantly, it comes at a time when we are hopeful for change and that we start building more bridges instead of walls,” Rael added.

“The Beazley Designs of the Year are the Oscars of the design world,” said Razia Iqbal, a journalist who chaired the Design Museum’s panel of judges. The award, she noted, highlights work that pushes boundaries of creativity and innovation.

The metal wall was meant to be a stark barrier dividing the U.S. and Mexico, the centerpiece of President Trump’s aggressive immigration policies. But in one spot, it became a junction point instead – a fulcrum for a series of seesaws that let children in the two countries share a playground toy.

The project, officially named Teeter-Totter Wall, was first installed in July 2019 when workers slid steel beams through the slats of the border near El Paso, Texas, and Ciudad Juárez.

“For the first time, children from both El Paso, Texas, and the Anapra community in Mexico were invited to connect with their [neighbors], in an attempt to create unity at the politically divisive border,” the museum said.

“Everyone was very happy and excited to engage the seesaws,” Rael told NPR at the time. The installation went smoothly, turning an idea that had been growing for 10 years into a reality.

“It was peaceful and fun — a day at a park for the children and mothers of Anapra,” Rael said.

“The project resonated with people around the world in a way that we didn’t anticipate,” San Fratello said when the award was announced. “It speaks to the fact that most people are excited about being together, and about optimism and about possibility and the future. And the divisiveness actually comes from the minority.”

Rael is a professor at the University of California, Berkeley; San Fratello teaches at San José State University.

The seesaw project was chosen out of more than 70 nominees from dozens of countries, including a customized “stab-proof vest” that the artist Banksy designed for musician Stormzy.

Also considered: the gray and red rendering of SARS-CoV-2, the virus that causes COVID-19. Commissioned by the U.S. Centers for Disease Control and Prevention and designed by Alissa Eckert and Dan Higgins, the famous sphere, with its menacing clusters of crowns, won the design award in the graphics category.

The Impossible Burger 2.0 won in the crowded product category, which also included Lego Braille bricks and a self-sanitizing door handle.