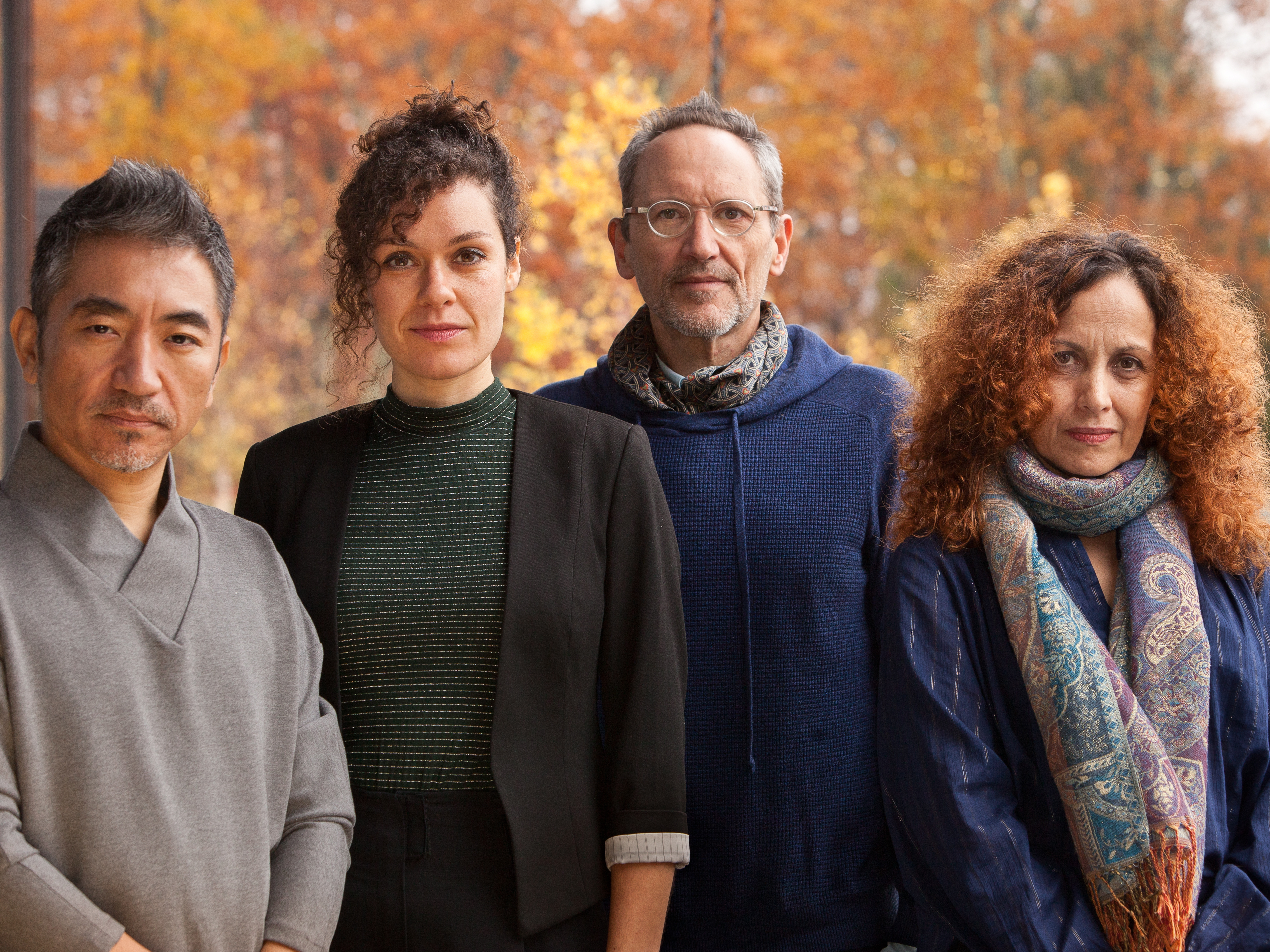 What Is The Sound Of Grief? Composer Osvaldo Golijov Puts It To Music

Osvaldo Golijov is a MacArthur “genius” composer who’s written for Yo-Yo Ma, Kronos Quartet and soprano Dawn Upshaw. But in 2012, he was accused of plagiarism, and he disappeared from the scene. Only now, nearly a decade later, is Golijov reemerging — with a work that could not have a more timely subject: it’s a meditation on grieving and loss.

Osvaldo Golijov says his own thoughts about grief go back to his childhood in Argentina, when his Eastern European Jewish immigrant great-grandfather was mourning the imminent death of his son. “He lived with my family, and slept in my bedroom while one of his sons was dying,” the composer explains.

“I remember waking up in the mornings and seeing him next to the window, praying,” Golijov continues. “Even if I was only maybe seven years old, I remember asking myself, how does a person keep praying after losing a child?”

Composer Osvaldo Golijov (second from right) and three of his colleagues on Falling Out of Time: vocalists Wu Tong, Nora Fischer and Biella da Costa.
CREDIT: David O’Connor/Courtesy of the artists

Then, in 2002, Golijov met the founder of The Parents Circle, a group of Israelis and Palestinians who have lost family members in the ongoing conflict between their peoples. The group’s founder, Yitzhak Frankenthal, told Golijov about one father who couldn’t bear to sleep at his own home after his son died. Instead, he slept at his son’s grave. Frankenthal stayed with him for several nights at the grave, until the mourning man could bring himself to go home.

“That story,” says Golijov, “then became more and more urgent in me, because I realized that I know seven couples between family and friends who have had this experience. And I think that we all avert our gaze.” Perhaps because it’s too overwhelming to contemplate.

Years later, when Golijov was in the midst of his own long period of silence, he picked up a book — the Israeli author David Grossman’s Falling Out of Time. It’s part poetry, part play, part novel — a chronicle of a man out of his mind with grief for his dead son. Grossman himself lost his son, a soldier who was killed in action.

“The first time we met,” Golijov recalls, “he told me that he and his wife were at home one night when two messengers came to tell them the news of the death of their son. And as soon as they heard that, they went upstairs to wake up their younger daughter, who was 12 at the time. And the first thing she said to them was, ‘But we shall live.'”

Golijov’s meditations on grief and loss are the heart of his comeback work, Falling Out of Time, a musical setting of Grossman’s text. The composer has often been moved to address enormous ideas in his music: his best-known work is La Pasion segun San Marcos (the Passion according to St. Mark) — a Latin American depiction of the last days of Jesus before the crucifixion.

Golijov’s Passion was hailed as a masterwork for the 21st century, and other big projects followed. Then, in 2012, came the accusation of plagiarism — made by two critics. It turned out to be a misinterpretation of an arrangement between Golijov and one of his collaborators. But there were also complaints that Golijov had substantially reused material.

The composer, now 60 years old, went silent. He missed deadlines, including a commission from the Metropolitan Opera. Falling Out of Time marks his return.

The work, which was written for the Silkroad Ensemble, was supposed to tour widely in 2020 — a year of so much mourning and isolation. Violinist Johnny Gandelsman remembers one of the pre-pandemic performances.

“There was something about Osvaldo talking about the piece, and talking about David’s experience, and then us playing,” Gandelsman recalls. “When we finished, you could you could hear the artists sobbing.”

Falling Out of Time, says its composer, is about accompanying the isolation of grief.

“David Grossman said to the Silkroad and to me, he said even the father and the mother that are grieving the same child are each of them in their own island of exile, right? So we are alone. And yet the rest of us, I think it is our duty to accompany.”

In Grossman’s book, the main character — the father mourning the loss of his child — walks and walks through his town in maddened circles; eventually, other mourners remembering their own dead children follow him.

Golijov contrasts this endless walking “to nowhere,” he says, with a traditional Jewish shiva, in which mourners are comforted by family and friends who come to sit with the bereaved. As author Leah Hagar Cohen writes in the liner notes to Falling Out of Time, this instead is a “walking shiva,” in which the man’s wandering is its own kind of ritual.

The Silkroad Ensemble recorded “Falling Out of Time” for Johnny Gandelsman’s label, In A Circle.

“I started working on the album in February or March,” says Gandelsman. “So it was right in the middle of the pandemic. Having something to do and something of this meaning and quality was just something that really gave my life some meaning during these really bleak and empty months, creatively speaking.”

And the work seems to have opened a well of inspiration for Golijov, in the midst of the pandemic.

“It’s interesting that when there is no distractions or anywhere to go,” he observes, “the music keeps coming and coming and coming. So yeah, for some reason — I always say, the faucet opened, and it’s flowing.”

Golijov says he’s made a certain peace with the ebbs and flows of his creativity.

“I really envy composers that are constantly prolific. But I also learned to live with myself, in the sense that I can be silent for periods and then not silent.”

In the wake of such a dark and dense piece as Falling Out of Time, Golijov says that he has turned to writing a new piece that is its opposite.

“There is a quote-unquote freedom of the brush that I am very happy about,” he remarks. “I think that this is, for me, important right now, spiritually and musically, to go to a place where it’s not no where and no time, but where time is clicking and there is growth — and there’s funk and rhythm and jokes.”

A place, that is, filled with lightness and brightness.