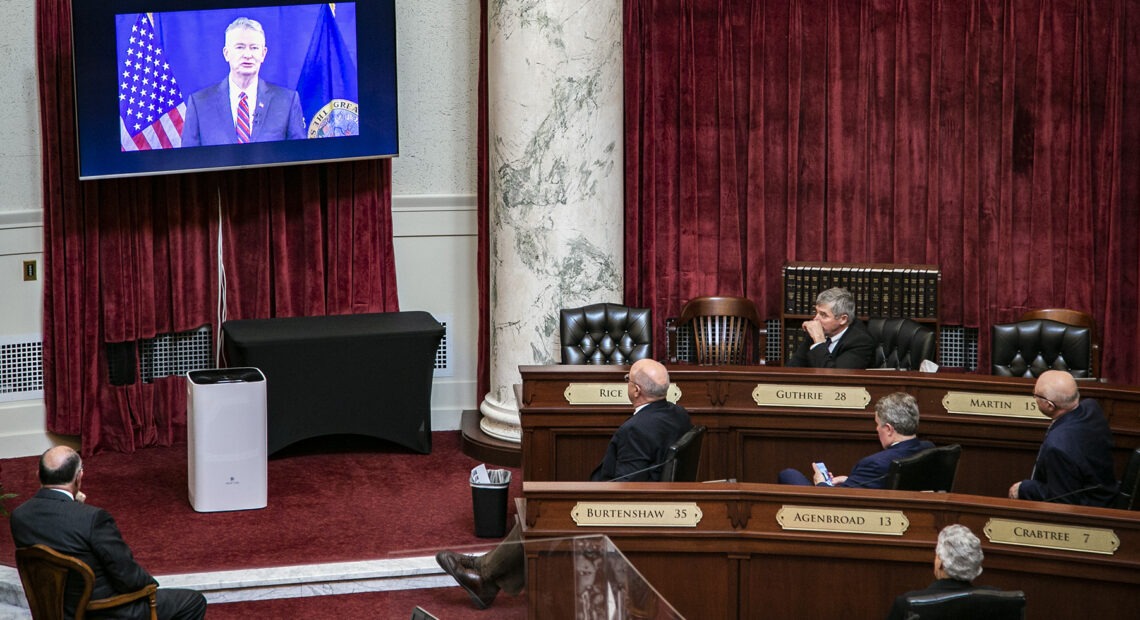 Analysis: The Showdown Between Idaho Lawmakers And Governor That Could Define 2021 Session

Originally posted on IdahoEdNews.org on January 21, 2021

In Round One of the staring contest, Gov. Brad Little blinked first.

On Wednesday, he announced that his State Board of Education would come up with a reworked plan to allow more spectators at high school sporting events. The news came with the House poised to vote on rescinding all of the governor’s limits on public gatherings.

With at least 11 pieces of legislation already in the pipeline — all addressing some aspect of Little’s coronavirus response, and the Legislature’s role during an emergency — this issue is a long way from settled. And it could be a fascinating, defining debate of the 2021 session.

Separation of powers, once the stuff of a “Schoolhouse Rock” segment, is all a bit more real to many Idahoans.

“These are orders that have affected all of us in one way or another, and continue to affect us,” said Boise State University political science professor Jaclyn Kettler. 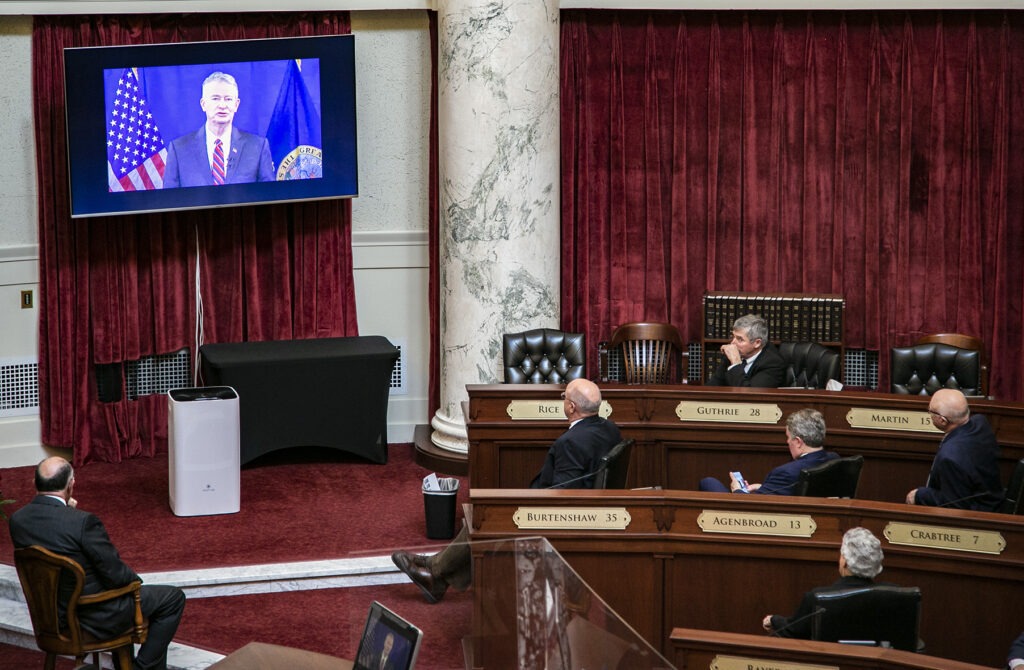 Senators watch Gov. Brad Little’s 2021 State of the State address from the floor of the Senate chambers. Because of COVID-19 precautions, Little delivered the address remotely instead of in the traditional joint gathering of the House and Senate chambers. CREDIT: Nik Streng/ Idaho EdNews

Certainly, some legislators have been stewing about separation of powers for years, but this battle is really 10 months in the making. As Sen. Steve Vick, R-Dalton Gardens, put it Tuesday, “What started out as 15 days to slow the spread has now turned into more than 300 days.”

Channeling angry and frustrated constituents, some legislators have been openly critical of almost everything related to the state’s 300-day coronavirus response: from limits on gatherings to the closure of businesses deemed non-essential, to the role of health districts. Legislators have frustrations that are uniquely their own — such as the fact that they cannot call themselves into session, but instead must wait on marching orders from the governor.

We knew this would be a big issue in the 2021 session — lawmakers telegraphed as much in August, after Little did call the Legislature back to Boise for a restive three-day special session. But House Speaker Scott Bedke might have been overly optimistic last week when he told reporters that he hoped the process would prove to be “somewhat anticlimactic.”

Some of these separation-of-powers proposals are more of a direct criticism of Little than others.

Presenting a proposal to limit emergency declarations to 30 days — unless legislators sign on — House Assistant Majority Leader Jason Monks seemed to tread with care Wednesday. He spoke of the value to have 105 legislators look at the situation, in concert with the governor. And he suggested lawmakers have been lax in the past. “The legislation makes the Legislature do a lot more work than it had,” said Monks, R-Meridian.

On Monday, Rep. Brent Crane didn’t do much to hide his frustration. As the House State Affairs Committee chairman pushed committee members to support his proposal to rescind limits on gatherings, the Nampa Republican noted that the governor’s office and the State Board weren’t at the hearing. And Crane made no secret of the fact that he was hoping to use legislation to exert some pressure, and force the parties to the bargaining table.

By Wednesday afternoon, the strategy had appeared to work. Little put the State Board to work, and the House postponed a Thursday morning vote on Crane’s proposal.  And while Little accurately noted that the state’s new coronavirus case numbers and hospitalizations are slowing, his announcement didn’t occur in a Statehouse vacuum.

Nor is Idaho’s separation-of-powers debate taking place in a political vacuum.

At least 25 states are looking at legislation to curtail a governor’s powers during an emergency, according to the National Conference of State Legislatures. While Idaho lawmakers have been prolific with separation-of-powers legislation, their proposals follow some familiar themes. The idea of limiting the duration of an emergency designation is nothing new, according to NCSL. And with a constitutional amendment allowing legislators to call themselves into session, lawmakers are trying to follow the lead of 36 other states.

Yet there are some serious questions about how this power struggle could shake out.

If lawmakers rescind Idaho’s coronavirus emergency declaration, could that place millions of dollars of federal aid in jeopardy? Even Republican leaders — such as Monks and Senate President Pro Tem Chuck Winder of Boise — are unsure.

And with college professors and students waiting somewhere in the queue — along with hundreds of thousands of other Idahoans — could legislative action slow the flow of scarce coronavirus vaccines into Idaho?

“You should be concerned,” said Brad Richy, director of the Idaho Office of Emergency Management, during a Senate State Affairs Committee hearing Tuesday.

That warning was one reason Sen. Grant Burgoyne, D-Boise, urged his colleagues to go slow.

“Let’s not make a mistake today. Let’s get this right,” he said. “Let’s not try to settle old scores about this pandemic through this resolution.”

Undeterred, the committee signed off on a resolution to rescind the emergency declaration. It awaits a Senate vote.

And even if lawmakers aren’t trying to settle old scores, as Burgoyne puts it, they might be trying to score political points that can pay dividends later. Perhaps Republicans will be lockstep on these issues. Perhaps not. This issue has every chance to expose some old rifts within the Idaho GOP — just 16 months before a GOP primary that, presumably, will pit Little against a challenge from the right wing.

In any “normal” legislative season, a record $600 million budget surplus would provide the prevailing storyline — one with implications for tax policy and education funding. But not with a potential power struggle looming.

“It really has the potential to swallow up a lot of focus this session,” Kettler said.

This year had all the makings of an unusual legislative session. So far, it seems likely to deliver on that potential.