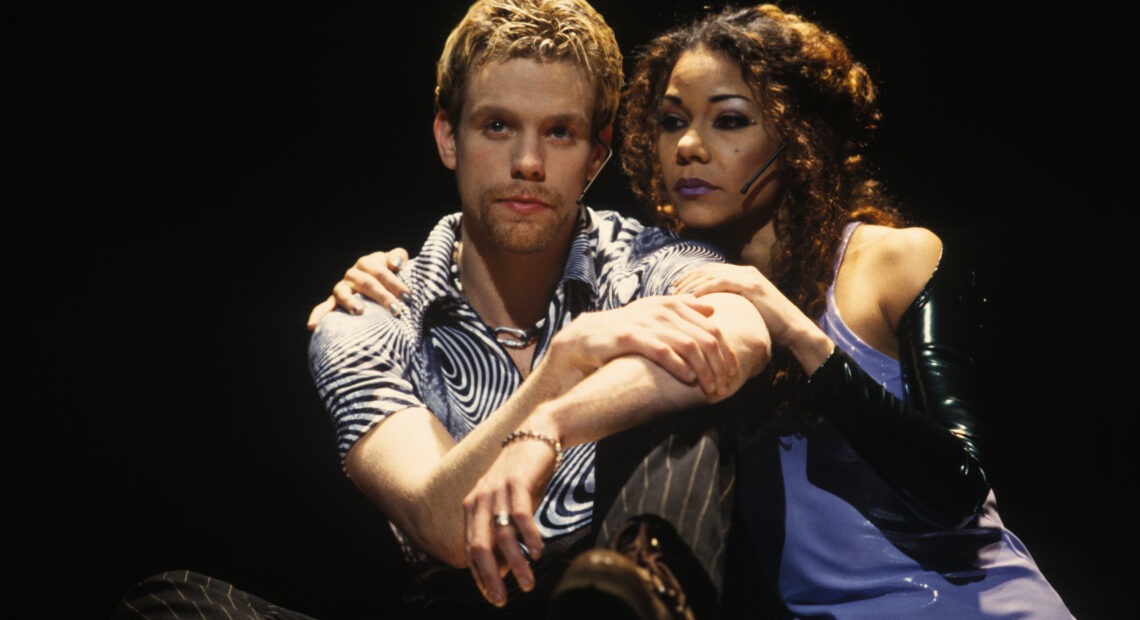 On Jan. 25, 1996, a new rock musical by a little-known writer, Jonathan Larson, gave its first performance. Friends and family filed into a small off-Broadway theater to see Rent. The show was a retelling of La Boheme, set on the Lower East Side of New York, as people were dying of AIDS. It became an international phenomenon, winning the Pulitzer Prize and Tony Award, among others, but the performance almost didn’t happen. Early that morning, Larson died of an aortic aneurysm. I spoke with some of the people who were there that night.

“It really begins and ends with Jonathan’s writing as a great composer and a great lyricist,” says Tim Weil, who was the show’s music director/keyboard player/arranger. “He knew as much about Billy Joel’s piano playing as he knew about Sondheim’s lyric writing. He was really just extraordinary.” 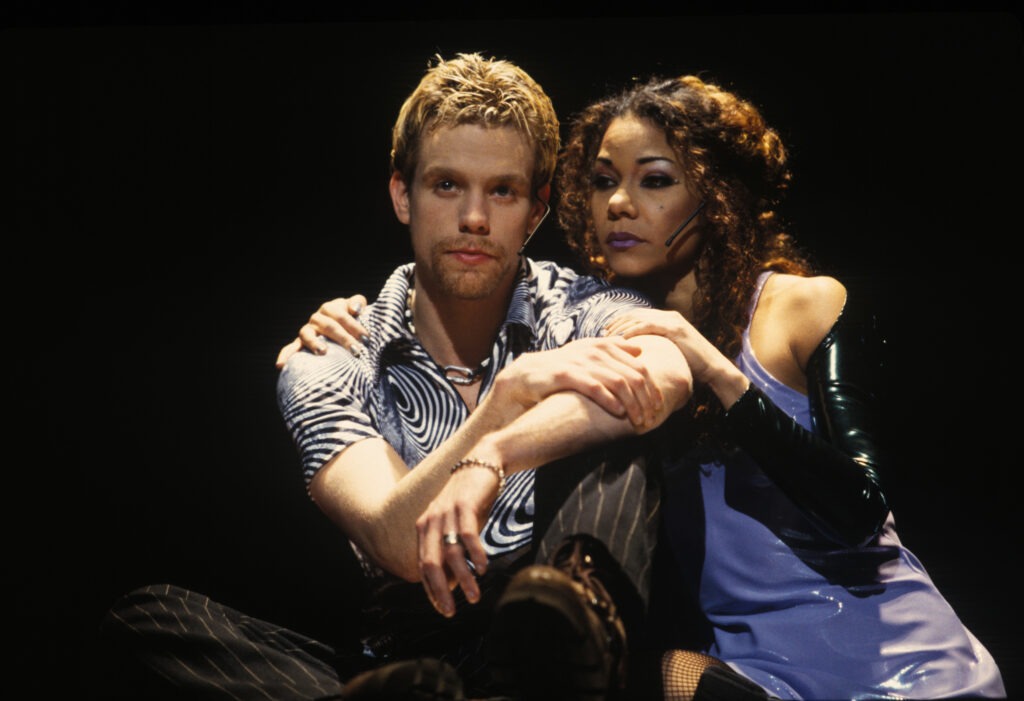 Daphne Rubin-Vega played Mimi in Rent. “It was a lot of fun to actually be able to practically apply my research of partying …” she says. “I knew these people. I knew this world.” She’s pictured above with Adam Pascal in New York Theatre Workshop’s 1996 production of rent. CREDIT: Joan Marcus

Jim Nicola, who’s artistic director of the New York Theatre Workshop, where Rent premiered, says the script came to them by lucky accident. As their theater was being constructed on E. 4th St., Larson rode by on his bicycle. Nicola says, Larson “walked in and saw his friend and our production manager, George Xenos. And he was very excited because he had this thing set in the East Village and he was looking for the right theater in the East Village to do it. And then George got it to me.” Nicola was intrigued with the early draft and the theater embarked on a development process, sponsoring readings and workshops.

Actor Anthony Rapp was hired to play Mark Cohen, a documentary filmmaker. “I’ve always felt that Mark was the closest sort of stand-in for Jonathan,” he says. “Jonathan himself was a cis-het HIV-negative man who was watching what was happening around him and responding to it and trying to find a way to channel the grief and anger and hopelessness that he was feeling into something positive. And Mark is very much doing that.”

Before rehearsals started, Larson invited the cast over to his loft, with mismatched furniture from the street, for a potluck “peasant’s feast.” Rapp remembers, “he gave us this really lovely toast, which was, like, ‘You are bringing to life my friends, some of whom are friends that I’ve lost. And so, I wanted to open my home to you.’ ”

Actress Daphne Rubin-Vega, who played Mimi, was there that night. “I remember being very moved, but also thinking, oh, he’s so goofy, you know what I mean?” Rubin-Vega says she could relate to her part, since she was a frequent club-goer. “It was a lot of fun to actually be able to practically apply my research of partying,” she says, laughing. “Not that I was a junkie stripper with AIDS — no offense to junkie strippers with AIDS — but I knew these people. I knew this world. I grew up around this world.”

As rehearsals went on, Larson made changes to the script, which in addition to dealing with AIDS, featured interracial couples, both gay and straight. He continued to write new material but was also showing signs of illness. Then, one night, during a technical rehearsal, he collapsed. “We were rehearsing ‘What You Own’ and there was a disruption,” says director Michael Greif. “And we found out that the disruption was that Jonathan was feeling very ill.” 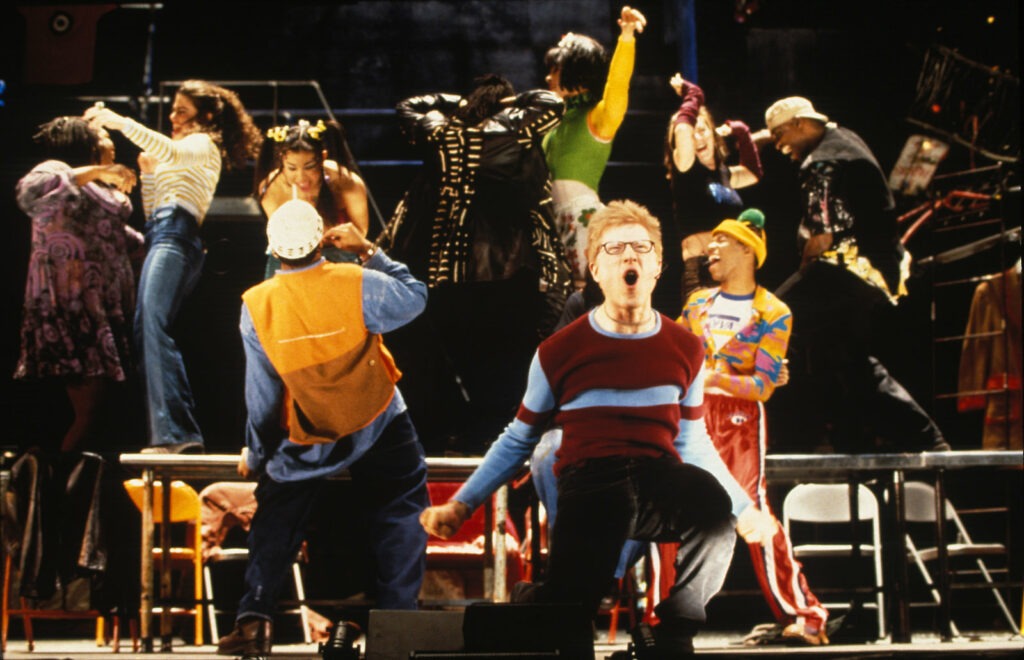 “There was an incredible mixture of life, matching art, matching life,” actor Anthony Rapp recalls of Rent’s first performance. “The distance between what we were experiencing ourselves, and as the characters was, like, tissue paper thin.” CREDIT: Joan Marcus

Rehearsal stopped, says music director Tim Weil: “And Jonathan, as only Jonathan would, said, ‘Can you believe it? I pass out in the theater right as the characters are singing [the lyrics] “dying in America.” ‘ ”

Larson stayed away from rehearsal for a few days, seeing doctors and taking a trip to the ER. “They misdiagnosed him with possible food poisoning,” says Rubin-Vega. Weil adds, “They don’t look for a 10-inch tear in your aorta from a healthy 36-year-old.”

When dress rehearsal arrived, so did Larson, looking very pale, as he watched from the back of the theater. Afterwards, Rapp says, “We felt super happy and excited. It had gone very, very well.” Larson gave an interview to The New York Times, which was preparing a piece for the 100th anniversary of La Boheme, which was also focusing on Rent. Then, Weil says “we did notes … and that was the night he went home and passed away.”

“At 8:30 in the morning, my phone rang,” remembers artistic director Jim Nicola. “And it was our production manager who said she had just gotten off the phone with the police and she told me that he had died.” Holding back tears, he says “didn’t see that coming. So, I got dressed. We called the cast. We need to be together.” 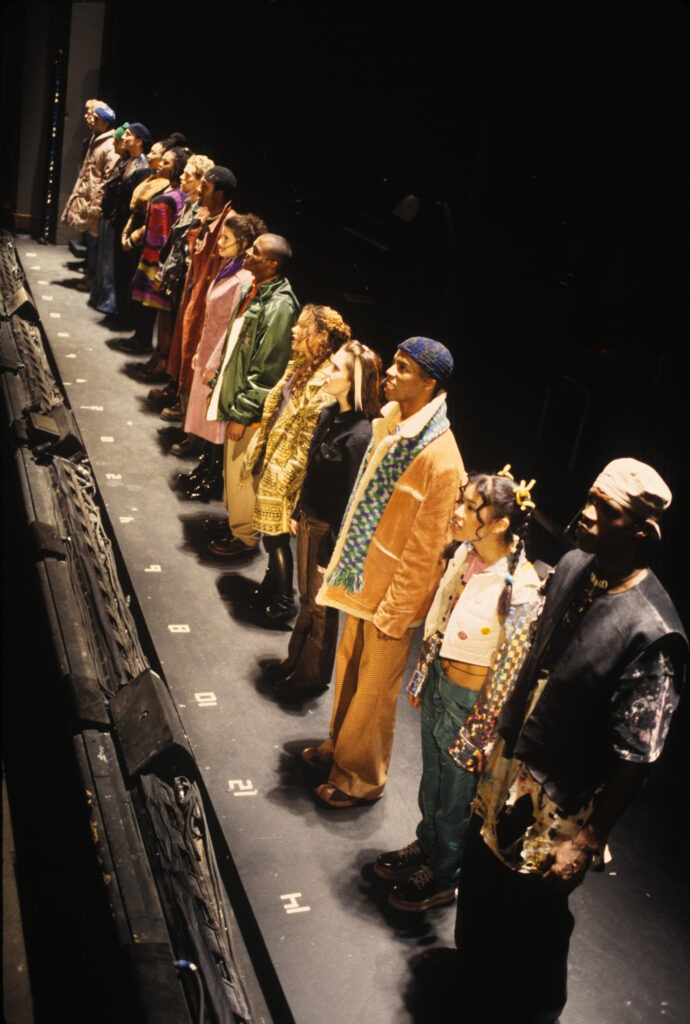 “The call came to me in the morning, and it was Jim Nicola,” recalls Wilson Jermaine Heredia, who played the drag performer Angel, “and it was surreal.” Rubin-Vega says, “We were all in a collective shock. And we were huddled together because the only thing that was real was uncertainty.”

The first preview was scheduled for that evening and, after a while, a decision was made to open it only to friends and family – Larson’s parents and sister were coming to New York that day. “It was decided that we do it with a sit-down reading, no costumes, water on the table, a script in hand and mics,” says Rubin-Vega. “That the show must go on was imperative.”

“The show itself is so much about, in the face of loss, still finding opportunities to find joy and to live life to the fullest,” says Rapp. And, as the performance went on, the cast found they couldn’t just sit. “Because there were so many emotions involved, by the time we got to ‘La Vie Boheme,’ you know, it completely erupted into a whole full-out staged performance,” says Heredia. “Daphne, you know, she got on the table. Then I got on the table. It was just an explosion of people. We couldn’t stop doing it.”

“We took a break, where intermission was,” says director Michael Greif. “I remember going backstage and said, ‘well, it’s clear that we want to do more of this, so let’s do a staged version of whatever you want to do of Act II.’ ” Rapp adds, “There was an incredible mixture of life, matching art, matching life. The distance between what we were experiencing ourselves, and as the characters was, like, tissue paper thin.”

At the end of the performance, the crowd erupted. But, after the actors got out of costumes, Rapp says, “when we came out, no one had moved. The entire theater was sitting in total silence for a very long time. And when you have a couple hundred people sitting together, that is a profound silence.” Greif adds, “We were painfully aware that Jonathan wasn’t, you know, getting up and coming in from the back of the house.”

“We all sat there together, for very, very, very long time,” says Rapp. “And then, finally, a voice from the back of the theater said, ‘thank you, Jonathan Larson.’ And that sort of broke the spell.”

Rent, of course, became a once-in-a-generation sensation, with its depiction of youthful, hopeful characters, facing enormous loss. It transferred to Broadway, where it ran for 12 years, had touring productions in the States, played abroad and was filmed, with most of the original cast. But, that moment 25 years ago, still lingers in the minds of all those who were there that evening.

“It was as if Jonathan had written his own memorial service or funeral and we were performing it for ourselves and for his loved ones,” remembers Rapp. “It was an astonishing moment that, you know, yeah, it’s 25 years ago. I will never forget it, as long as I live.”