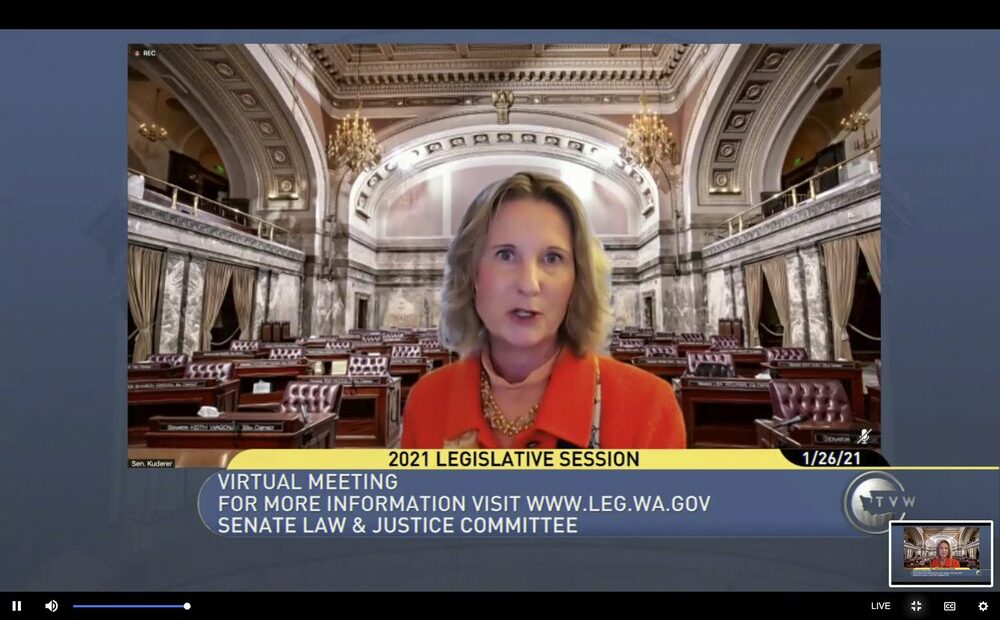 The open carry of guns and other weapons would be banned on the Capitol campus and at or near any public demonstration across Washington under a measure that received a remote public hearing Tuesday, with proponents calling it a common-sense measure amid heightened political divisions and opponents arguing it would infringe on constitutional gun rights.

The sponsor of the bill, Democratic Sen. Patty Kuderer, told her fellow members of the Senate Law and Justice Committee that in light of events like the fatal shooting at a protest in Kenosha, Wisconsin, last year as well as recent armed protests at the state Capitol that saw violence, the measure was needed “to ensure that weapons are not used to intimidate peaceful protesters or to increase the potential for lethal violence to occur.”

Kuderer’s bill would prohibit people from carrying weapons, either on their person or in their vehicle, while attending a demonstration at a public place or while being within 1,0000 feet of a demonstration. 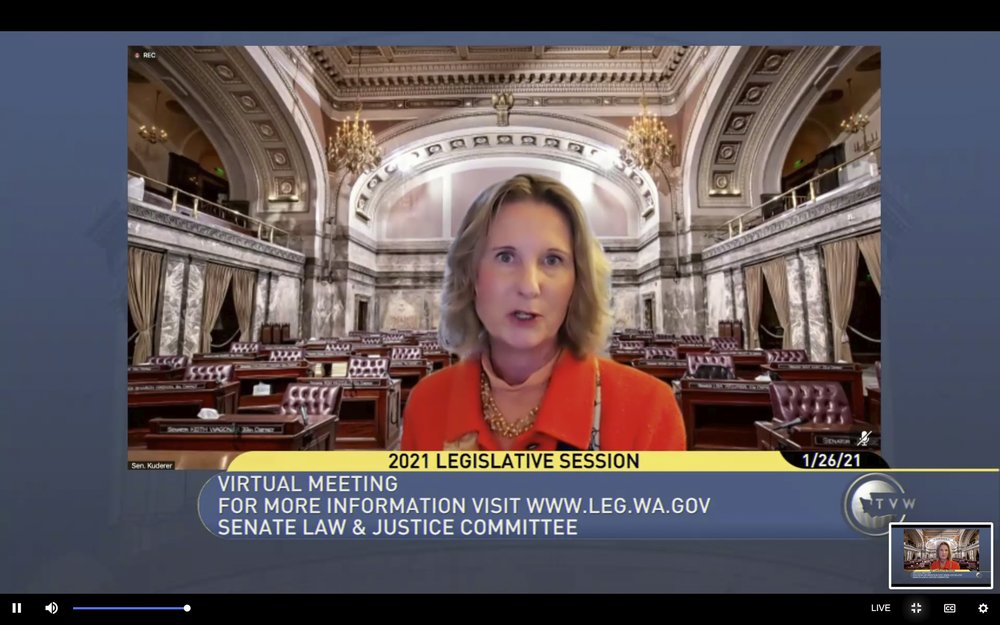 Washington Sen. Patty Kuderer, D-Bellevue, is shown against a virtual background as she speaks, Tuesday, Jan. 26, 2021, during a remote public hearing of the Senate Law & Justice Committee in Olympia, Wash. Kuderer is the sponsor of a measure that would ban the open carry of guns and other weapons on the Washington state Capitol campus and at or near any public demonstration across the state. CREDIT: TVW via AP

It also prohibits openly carried weapons in the state Capitol or on the Capitol’s grounds. Violation of the law would be a gross misdemeanor, punishable by up to one year in jail and a fine of up to $5,000, or both. She said she modeled it on a similar law enacted in Alabama.

Republican Sen. Keith Waggoner, a member of the committee, challenged Kuderer, asking “do you not see a conflict of logic to support a First Amendment right, but you’re introducing a bill that suspends a Second Amendment right? They’re both equal in my mind.”

Kuderer disagreed, saying that the Second Amendment is not suspended under the measure, “you are just limited to where you can exercise that.”

“Right now you can’t bring your gun into a courthouse,” she said. “Try it. I can guarantee you won’t get very far.”

The Capitol building has been closed to the public since last March because of the coronavirus pandemic. But last January, more than 100 people, some with long guns and militarized gear, entered the building and attempted to speak with House Republican Leader J.T. Wilcox. In December, there was a shooting that injured one person during a clash between protesters in a parking lot near the Capitol’s two press houses.

Earlier this month, a state panel in Michigan banned the open carry of guns in that Capitol. Moves to ban weapons at the Statehouse there have been pushed since April, when protesters opposed to Gov. Gretchen Whitmer’s COVID-19 restrictions, some armed with long rifles and other weapons, entered the Michigan Capitol demanding to be allowed onto the floor of a legislative chamber that was closed to the public.

During more than 90 minutes of public testimony before the Washington state committee, lawmakers heard from alternating panels of supporters and opponents of the bill.

Jessica Zielinkski testified in opposition, saying she openly carries a firearm as protection for herself and her three young children. She described a situation last summer where she become trapped within a protest in downtown Seattle while heading home from running errands and was surrounded by angry protesters.

“I was terrified, and I was afraid for my life,” she said. “Under this proposed bill, I would have been guilty of a gross misdemeanor simply because a protest erupted around me and trapped me within it.”

Second Amendment rallies are common in Washington state. The number of protests including people carrying weapons has increased with protesters drawn to the Capitol to oppose coronavirus restrictions, and then, after the election, the outcome.

Chief Adrian Diaz, Seattle’s interim police chief, said he’s a supporter of Second Amendment rights but told the committee he supported the proposed bill because the “the presence of firearms at large gatherings have created significant dangers.”

The proposed law would add demonstrations and the Capitol grounds to the list of designated places where firearms are already prohibited statewide, including restricted areas of jails, courtrooms, taverns and commercial airports.

The committee is scheduled to vote on the measure on Thursday.