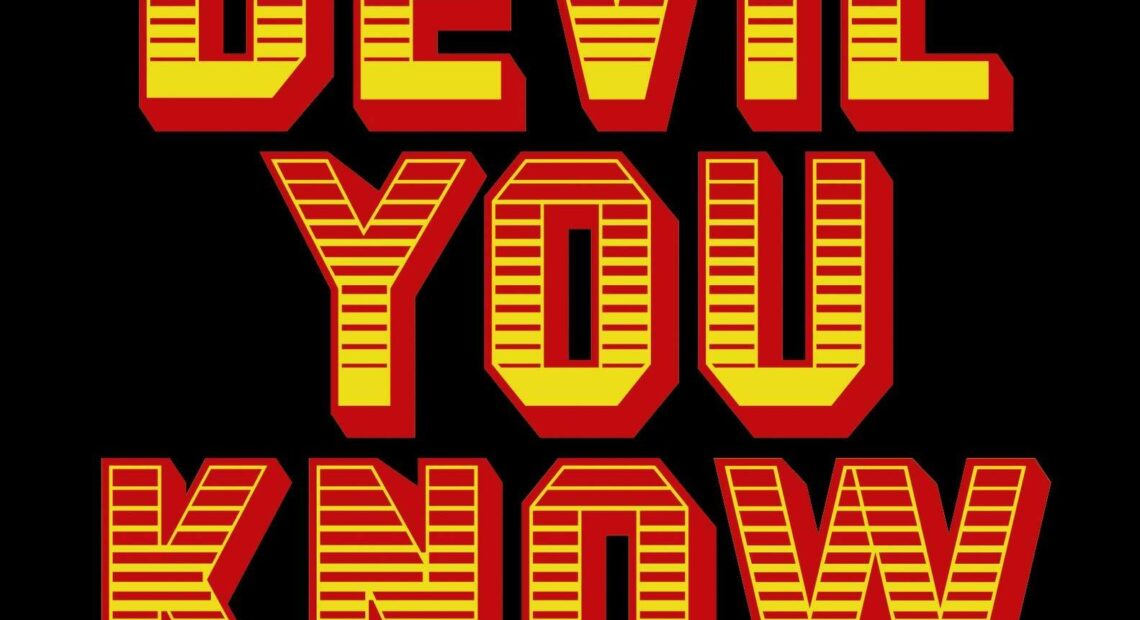 BOOK REVIEW: Charles Blow’s ‘The Devil You Know’ Is A Black Power Manifesto For Our Time

Some time into his new book The Devil You Know: A Black Power Manifesto, Charles Blow recalls hearing Harry Belafonte give a speech.

The subject was Belafonte’s bailout of some student members of the Student Nonviolent Coordinating Committee (SNCC.) Belafonte had raised $70,000 in bail money and called up his best friend Sidney Poitier to help him deliver the money. But it was not easy. Belafonte recalled how he and Poitier were chased by the Ku Klux Klan, whose members accosted them at the airport; Belafonte and Poitier had to take off speeding in a race for their lives.

Poitier and Belafonte were, without a doubt, two of the most acclaimed Black stars in America. And this still happened to them. But Belafonte’s did not end his story at the recounting of this memory of vile racism and terror. Belafonte turned it into a call for action. Facing the audience that Charles Blow sat in, Belafonte asked a simple question: “Where are the radical thinkers?”

In the years that passed, Blow found himself haunted by Belafonte’s question. In time, Belafonte’s questions spurred the writing of The Devil You Know, Charles Blow’s own declaration of radical thought — for Black Americans to reconsider their Great Migration North and imagine new possibilities of Black political might. 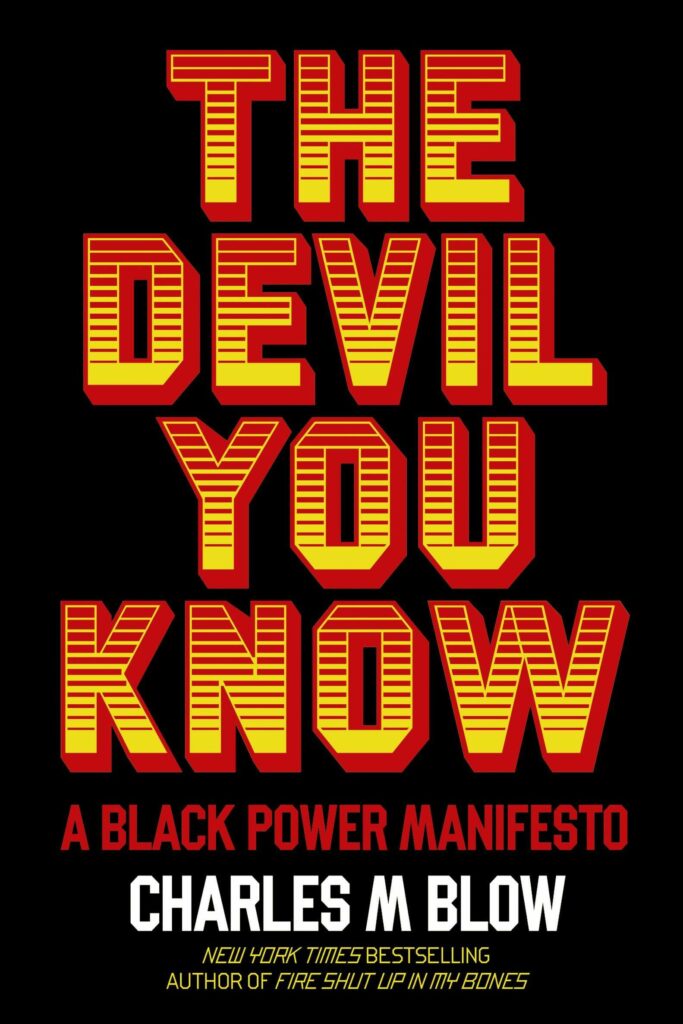 The Devil You Know by Charles M. Blow

Writes Blow: “The proposition is simple. As many Black descendants of the Great Migration as possible should return to the South from which their ancestors fled.” By concentrating their political power in key Southern cities, Blow posits, Black Americans will be able to effect actual social change. “The mission begins with the states, which are the true centers of power in this country, and as such control the lion’s share of the issues that bedevil Black lives: criminal justice, judicial processes, education, health care, economic opportunity and assistance.”

Blow, the author of the memoir Fire Shut Up In My Bones and a New York Times columnist, is himself a child of the South who migrated North for employment opportunities, and thus is aptly situation to discuss these ideas. “I was born in 1970 in Louisiana at the end of the Great Migration into a world shaped by vacancy,” Blow writes. “The landscape was specked by empty houses; there was more work than could be done, more jobs than could be filled.”

So why, remembering the economic blight of his childhood, does Blow advocate a return to the South?

Firstly, Blow argues, the South is no longer an economically depressed region, but an economically thriving part of the country, especially in its major cities. Writes Blow: “In 2018 Forbes compiled a list of ‘The Cities Where African Americans Are Doing the Best Economically” and found many of those cities were in the South. The 15 worst cities for Black Americans were all the destination cities from the Great Migration.”

Secondly, the South is home to more than 1,000 of the nation’s 1,200 majority Black cities, home to most of the nation’s Black-owned businesses, has more Black folks in local government than northern cities, and carries an intergenerational Black history, memory and culture that must be honored.

But Blow’s main point is this: Racism is everywhere — it’s just about what kind of racism you can live with. And for Blow, Southern racism is preferable to its Northern cousin. He writes:

“I often think of racism as having developmental cycles. In the South, it’s an old man. There racism hasn’t vanished (far from it), but it has come to terms with itself. In the North, particularly in destination cities, racism is a teenage boy, acting out as the old man did years ago.”

In cogent arguments bound together by his customary incandescent prose, Blow explores how the white backlash towards the Great Migration that never really ended has created a situation where racism in these Northern “destination cities” of the Great Migration makes life untenable for Black Americans. Through research undertaken by Project Implicit, Blow found there is no difference between anti-Black bias in the North and the South. There are only the ideas that people will admit to out loud. In other words, writes Blow, “white people outside the South say the right words but many possess the same bigotry.”

Consider this: Of the violent deaths of unarmed Black folks at the hands of policemen and white vigilantes, a great many now occur in the North, rather than the South. Eric Garner was killed in New York City. George Floyd in Minneapolis, Minnesota. Philando Castile was killed outside St. Paul, Minnesota. Mike Brown was shot in Ferguson, Missouri. Tamir Rice was gunned down in Cleveland, Ohio. Stephon Clark was killed in Sacramento, California. Freddy Gray was killed in Baltimore, Maryland.

And while the American public imagination remembers the murders of Emmett Till and George Stinney by white supremacy in the South, the North was also an extremely unsafe place for Black Americans of that time as well. The post-World War I migration of Black folks North was followed by violence levied at the new Black arrivals by white Northerners. “So much blood flowed in America’s streets that year that James Weldon Johnson, field secretary of the NAACP dubbed it the ‘Red Summer’ writes Blow of the 1919 Chicago white uprising against the Black citizens of the region. “In ten months, an estimated 250 people were killed — including nearly 100 who were lynched.”

Weaving together deeply thought out analysis and in-depth sociological and historical research, Blow details how, as Black folks migrated North, “white people in Chicago found a way to formalize and ensure segregation: restrictive covenants” that made Black people unable to lease, buy, or even use property in certain areas of the city. The result? “By 1939, an estimated 80 percent of all Chicago’s land area was covered by these covenants,” Blow writes. Black Americans in the North suffered racial violence and reductions of rights codified by law — just like Black Americans in the South, but often without the support of extended family and community back home.

Blow connects the dots between moments of social advancement for Black Americans through and the accompanying white backlash:

“Whenever Black people make progress, white people feel threatened and respond forcefully. Emancipation and the Civil War gave rise to the KKK, which formed just months after the war ended. The Supreme Court’s decision in Brown vs. Board of Education striking down racial segregation in schools gave rise to the white supremacist Citizen’s Councils. The election of the first Black president gave rise to the Tea Party, which was formed soon after Barack Obama was sworn in.”

As he discusses the rise of anti-Black violence and the need for safe spaces for Black folks, Blow draws from personal experience, detailing the moment his college student son was held at gunpoint on his Yale campus; how that moment echoed his own experience of being unjustly held at gunpoint by white police officers while in college himself. “He said he could make us lie down in the middle of the road and shoot us in the back of the head, and no one would say anything about it,” Blow writes.

But throughout the book, Blow grounds his ideas in this central question: “What could and should Black people do to acquire and maintain the economic and political power — for the many, not just for the few — that the Great Migration failed to secure?”

Blow pays special attention to the role of elders in the community as he discusses how the original Great Migration caused a “loss of generational connectedness as an entire young generation left and the South became more of aged society,” adversely affecting both young people and the elders. Here, Blow crafts an homage to the of elders in the Black community — from the great-uncle who babysat him to the importance of the example of elders like the 100 year-old Tim Black of Chicago who mentored a young Barack Obama newly arrived to Chicago.

It is also important to note the space Blow gives here to Black women social justice leaders who are often ignored, spending time with the mothers of the murdered black children — Samaria Rice, Sybrina Fulton; honoring the work of the great Shirley Chisolm; honoring the work Stacey Abrams. Indeed Abrams’ work, like Belafonte’s call to action, is an impetus of sorts for Blow’s book. “Georgia became the model for how Black people can potentially experience true power in this country and alter the political landscape,” writes Blow in his introduction.

Consider this: Just after the Civil War, Blacks were the majority in three Southern states and within inches of the majority in three more. “If the Great Migration hadn’t happened, and those Black people had remained in the South until the passage of the Civil Rights Act of 1964 and the Voting Rights Act of 1965, it is possible that African Americans would dominate the politics of the Deep South.” They could have controlled as many as 12 seats in the U.S Senate.

Blow does not call himself an activist and does not admit to any political aspiration; since starting his first newspaper in high school he has thought of himself as a newspaperman through and through. His job, writes Blow, is this: “I bear witness. I interpret the world. I record history in real time.”

But for Blow, Belafonte’s call still comes through loud and clear. Imagining free Black futures requires radical thought. “In a society and system in which white supremacy is ubiquitous and inveterate, Black people need fierce advocates to help restore the balance in the first instance,” writes Blow. Throughout his legendary career in journalism, Charles Blow has long been that voice. The question is now: Will you join him?

Hope Wabuke is a poet, writer and assistant professor at the University of Nebraska-Lincoln.