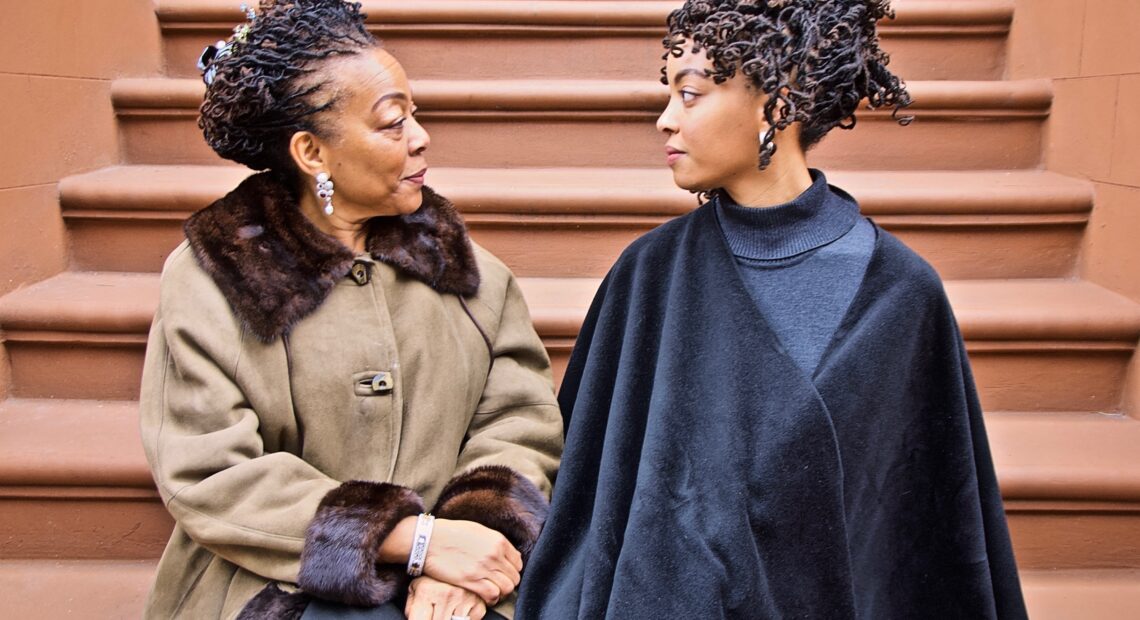 Art Where You’re At: With Power, Poise And Confidence, These ‘Women R Beautiful’

A demand, not a request. Mama had spotted the three cameras hanging from straps around Ruben Natal-San Miguel’s neck as he walked around her Bronx neighborhood. Her demand intrigued him.

Natal-San Miguel likes to photograph people where they live. He calls his pictures “environmental portraits.” No formal poses. Just a pause, in front of his camera.

Mama stopped by a red truck and crossed her arms. He liked the reflection of a tree on the truck’s side.

“And I just took the photo.”

It became his best-known picture. 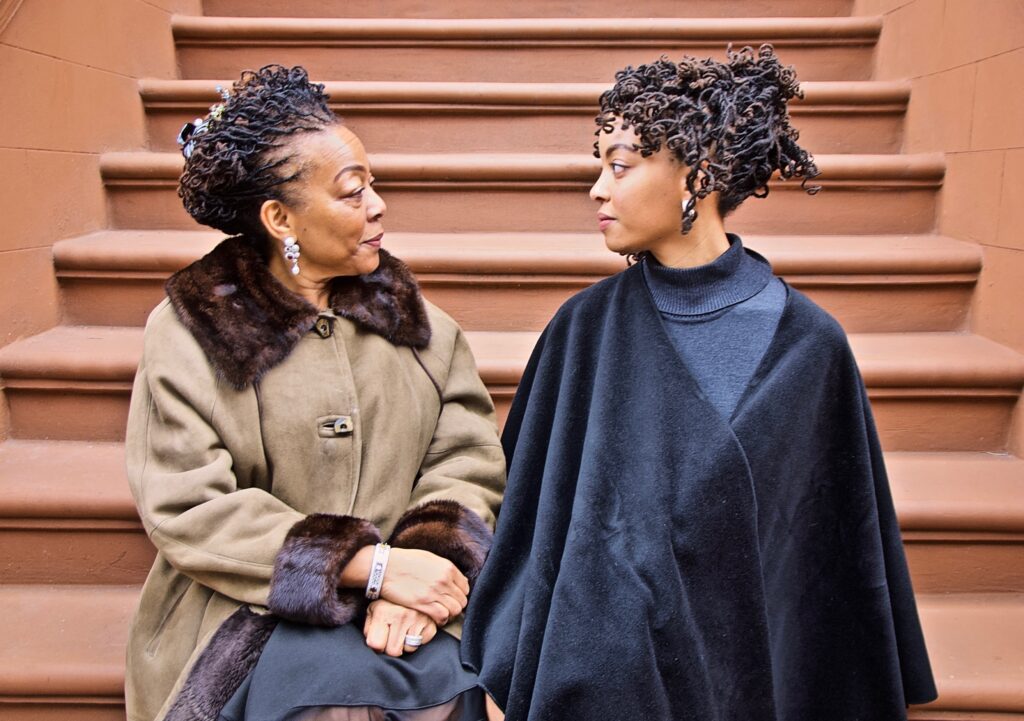 Mama (Beautiful Skin) — Natal-San Miguel added the parenthesis — belongs to the Mint Museum in Charlotte, N.C. It’s part of their first online exhibition. Twenty six of Natal-San Miguel’s photos are on view in “Expanding the Pantheon: Women R Beautiful.” His subject in this one has vitiligo. Pigment is missing from parts of her skin. She’s dappled. And Natal-San Miguel sees her beauty.

“Ruben always wants us to recognize the beauty in the overlooked,” says Mint curator Jen Sudul Edwards. “Her confidence, her brazen appraisal of the viewer … gives this impression of power and beauty.” 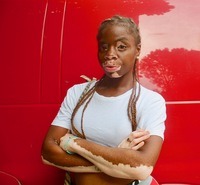 Natal-San Miguel says his goal in this series is to expand the pantheon. “It’s a way to have people understand otherness and other beauty; another definition of beauty.” The women show themselves as they are, and he’s their communicator.

What strikes me is that he gives us permission to see and, possibly, stare. You might want to do that on the street, but it wouldn’t be right. Spending time with her through photography, we begin to see her poise, her sense of self. We start looking at her in a different way. So he’s affecting how we see.

Here’s a more traditional beauty. Or is she?

Natal-San Miguel often roves around New York with his digital cameras (a Nikon and two Canons) prowling for pictures. “It’s almost like hunting.” He met Ongina at a big convention hall in Manhattan. Surrounded by vendors and celebrity booths, he was drawn to hers. Crushed aluminum foil lined the booth’s wall and spiked into her crown. Of course he had to take her picture.

They were at RuPaul’s DragCon, an annual showcase of the international drag community. Thousands of fans come to see drag stars — men, women, even pets who dress and make up in an extravagant performance of gender. Ongina was born Ryan Ong Palao. “The make-up is a work of art,” Natal-San Miguel says. Curator Sudul Edwards admires Ongina’s skin in the photograph: “the one still surface in all the frenetic craziness. It’s heart-stopping.”

Strolling in East Harlem Natal-San Miguel spotted Negesti on 125th Street and Park Avenue. She was just passing a vivid geometric mural. They started to chat. He learned she was a dancer, specialized in African dance, and was on her way to an AfroPunk festival. He liked how free she looked, and gutsy — dressed that way on city streets. “And I said ‘Oh my God, let me photograph you!’ ”

It took no time at all. “You have to understand that these encounters last sometimes seconds, or sometimes no more than three or four minutes,” Natal-San Miguel says.

He thinks his degrees in architecture help him compose a shot easily. The Negesti photo is “an image of empowerment” Sudul Edwards thinks. Natal-San Miguel agrees. “The confidence! A woman who knows who she is and can assert herself easily.” A real Ruben woman.

There are also Ruben girls. These were worth waiting for.

The photo took some detective work. Natal-San Miguel saw that elevated train in a TV commercial. He loved how it looked, used maps to figure out where it was, and went there. Then he waited and waited for the right image to emerge. People passed by, but none seemed right. And then, after 90 minutes, the three girls started down the steps. “A very cinematic NYC moment,” he says. “The subway, immigrants, religion, and tradition in the Boogie Down Bronx all blended up together.”

After clicking he stopped the girls, explained what he was doing, and showed them the picture. “Because you have to give respect to the people you photograph,” he explains. Later he sent prints. Collectors buy his photos. He also donates some to museums — “it’s important for people to see themselves on the wall.”

Finally, an “environmental portrait” of an environment and people Natal-San Miguel knows very well. He lives next door to that Harlem brownstone, and watched that woman raise her daughter.

The mother is a retired banker. She owns the building. Her MBA daughter works at Goldman Sachs. 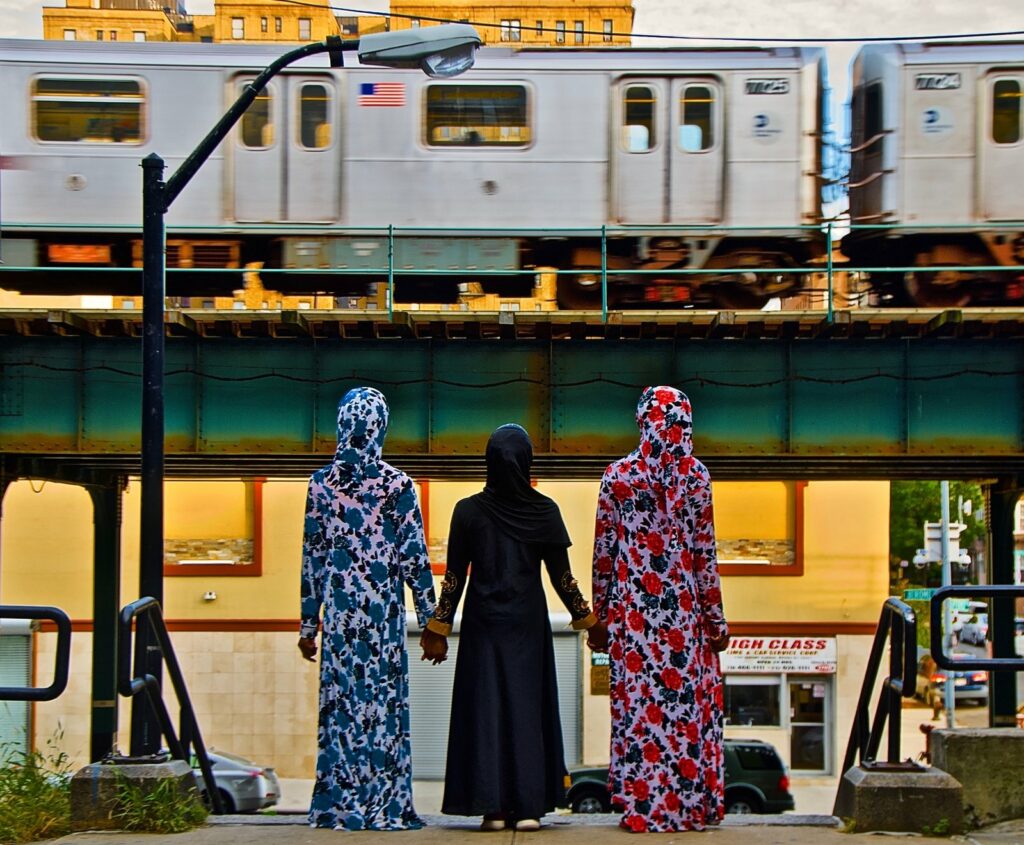 “I wanted to document generations thriving in Harlem.” Ruben says. “How that generation of strong African American women persevere.”

I love the emotional dynamic between them. The mother has “The New York Look.” Sudul Edwards, like me a New Yorker, knows that look. “You feel the pride and the potential for judgment.” For years we’ve encountered the Male Gaze — a close inspection that’s sexual, appreciative, possessive. Dominating. This is the Mother Gaze. It’s no-holds-barred love and appraisal. I’m full of feeling, looking at these women I’ve never met. You don’t often get that from an image on a computer screen.

Ruben Natal-San Miguel’s own emotions and experiences inform the photographs he takes. On Sept. 11, 2001 he was going to his job on Wall Street. Coming out of the subway in the North Tower of the World Trade Center he saw the buildings going down, people falling. “When you come from a tragedy like that, you have to find something that will be your therapy,” he says.

He took up photography, “connecting with people, even if only for five seconds.” After feeling numb from trauma he learned empathy. Connecting with life … reminding himself — and us — of its infinite variety.

Art Where You’re At is an informal series showcasing offerings at museums closed due to COVID-19, or at museums you may not be able to visit.