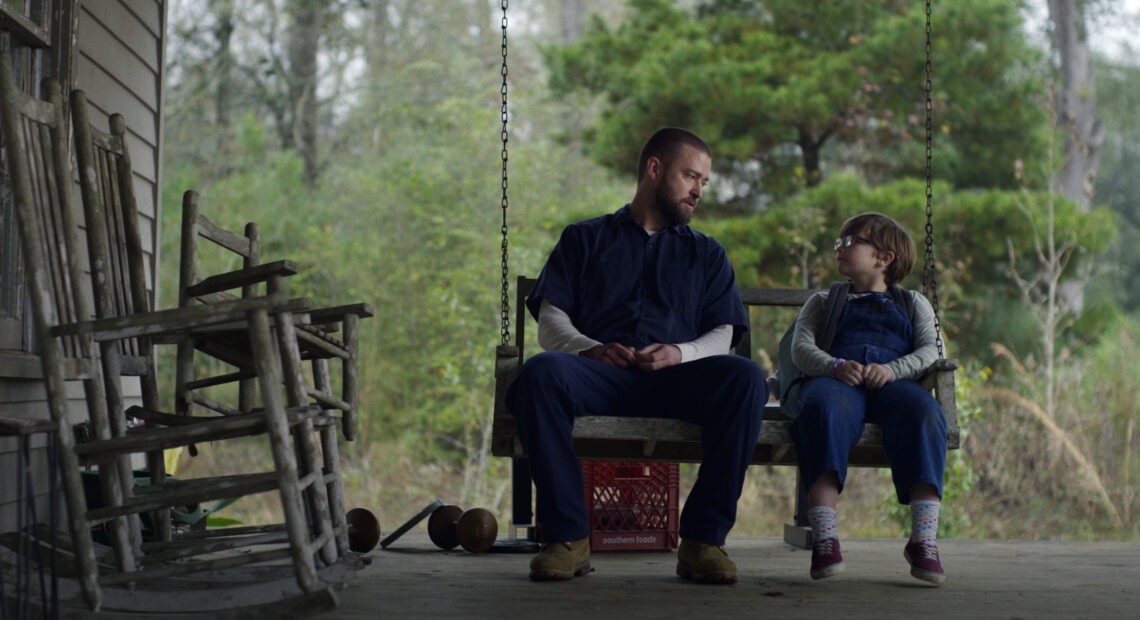 In the new film Palmer, Justin Timberlake plays Eddie, a former high school football star who comes back to his Louisiana hometown after more than a decade in prison. As he pieces together his new life, Eddie moves in with his grandmother and befriends her young neighbor, a boy named Sam.

Sam is funny and spirited, and is confident in his love of dolls and tea parties. When Sam’s mom disappears — as she often does — Eddie steps up.

“I grew up in the rural South as a young boy,” says Timberlake. “And I found myself relating to both of our lead characters — you know, being a young boy and being interested in the arts. And on the other hand, I found myself really relating to a guy like Eddie. … I knew guys like that growing up that were football gods or basketball gods in our hometown and then school ends and there’s this transition and they kind of don’t know exactly what to do with themselves.”

Justin Timberlake (left) and Ryder Allen star as Eddie and Sam in the new movie Palmer on Apple TV+.
Courtesy of Apple TV+

On casting Ryder Allen, the child who plays Sam

Believe it or not, this is Ryder’s first film. … Sometimes the naivete to a situation can give moments of genius, because there was something completely untrained about him, but also he just had an intuition. In the chemistry reads, we would play certain scenes out … and then I would just keep talking. I would just keep going. Coming from stage and having experience on shows like SNL and things like that, you know, you develop a level of improvisation that we wanted to try out on all the kids and Ryder … would just literally stay in character and keep playing. …

When you get an exchange like that between two actors … you start to feel like you’re just watching people; you’re not watching actors, you’re watching people. And that’s essentially what you want out of anything you’re doing on film.

On the message he hopes people take away from the film

We have to have open eyes, and open ears, and open hearts. … I don’t feel like I have an authority to tell people what to think or feel, but I guess I hope that the theme of acceptance comes shining through in this movie. … This boy is 8 years old and he likes what he likes and he shouldn’t be bullied for that, he should be accepted … supported and uplifted for that. … Really loving yourself and being able to see people in the world … for who they are and accept that, and love that — it has to come from within. Hopefully that’s what we accomplished with with my character, with Eddie. That finding that self-love can kind of lead you in that direction, it can be your compass.

On the criticism that he has appropriated black music

To be honest, I don’t know that I have an authority to respond to that. I can only tell you that where I grew up outside of Memphis, Tenn., … my mother introduced me to … so much beautiful art. She was that type of mother. I grew up listening to all types of music and, you know, the music that I write comes from an honest place of my favorite influences — and it’s as simple as that for me. …

All I can do is be true to my influence, because I think any musician, or artist, or actor, or director will tell you that we are a product of our influences, you know? I’ve met directors who say … “When I saw that movie in a theater, I wanted to make a movie like that.” And I felt that way. … I’ve responded in my childhood to certain songs like that, “Gosh, I want to write a song like that one day.” … I think you have to be true to your influence and then make your music your own — or your performance your own, or your movies your own.

Sophia Boyd and Melissa Gray produced and edited this interview for broadcast. Beth Novey adapted it for the Web.