‘This Is War’: Inside The Secret Chat Where Extremists Devised Their Plans After U.S. Capitol Attack

Originally published Jan. 28, 2021 by ProPublica, a Pulitzer Prize-winning investigative newsroom. Sign up for The Big Story newsletter to receive stories like this one in your inbox.

When the FBI arrested Edward “Jake” Lang on Jan. 16 for his alleged role in the U.S. Capitol attack, court documents show agents had followed a seemingly straightforward trail from his public social media to collect evidence. “THIS IS ME,” Lang wrote over one video that showed an angry mob confronting police officers outside the Capitol. The same post showed him trashing a police riot shield.

The government charged Lang with committing assault and other crimes, but the account of his activities spelled out in court papers doesn’t mention how the 25-year-old spent the 10 days between the riots and his capture: recruiting militia members to take up arms against the incoming Biden administration by way of an invitation-only group on the messaging app Telegram.

“Everyone needs to get 5 patriots in this group tonight that’s the goal 🙌🏻🇺🇸🗽,” Lang wrote in a chat on Jan. 9, one of more than 2,500 messages obtained by ProPublica. “We need each person to go out and fight for new members of this Militia like our lives depend on it.”

ProPublica gained access to the group after Lang sent an invitation to a reporter’s social media account. It’s unclear whether Lang knew he had invited a reporter, and the reporter joined but did not participate in the chats.

Part of the mob who attacked the U.S. Capitol in the hallway outside of the Senate chamber inside the Capitol on Wednesday, Jan. 6, 2021.
CREDIT: Manuel Balce Ceneta/AP

The group, created two days after the Jan. 6 attack, grew from a few dozen members to nearly 200 in just a week. There, safe from the deplatforming spree of mainstream social media giants like Facebook and Twitter, Lang set out to recruit “normies” and radicalize them to the point that they joined regional militia groups.

Lang’s conversations offer a window into how some of President Donald Trump’s most fervent supporters — still simmering over baseless allegations of election fraud — are finding new connections on messaging platforms that are largely hidden from public scrutiny. Unlike sites such as Facebook, Telegram is a messaging app where users can create large, invitation-only and encrypted chat groups, and it allows users to remain anonymous by hiding their phone numbers from one another. Within days of the riots, more than 25 million users globally joined Telegram, the company’s CEO said, although the U.S. accounts for a fraction of its user base. A company spokesman did not respond to questions from ProPublica.

The chats also make clear that at least some of those involved in the Capitol insurrection, despite a sweeping crackdown by U.S. law enforcement that has resulted in more than 160 cases, appear dedicated to planning and participating in further violence.

“This has been one of my concerns shorter-term: That folks who are more fervent are seeking each other out in a way that can lead to some short-term, violent outbursts,” said Amy Cooter, a senior lecturer of sociology at Vanderbilt University who has studied militia activity for more than a decade. Homeland Security officials on Wednesday warned of heightened threats of violence across the country from domestic extremists who felt emboldened by the Jan. 6 attack.

The FBI referred questions of whether the government was aware of Lang’s activities to the U.S. Attorney’s Office in Washington, which did not immediately return an inquiry seeking comment Wednesday.

A lawyer for Lang, Steven Metcalf, said he was not aware of his client’s private social media messages, including the Telegram group. Metcalf said he planned to enter a not-guilty plea and to contend that Lang was exercising his First Amendment right to free speech on Jan. 6.

After Lang’s arrest, his father, Ned Lang, told the local newspaper, the Times Herald-Record of Middletown, New York, that his son had struggled with substance abuse. “As a result, he has had numerous issues with law enforcement over the past 11 years and it has only gotten worse, as is evidenced by his most recent arrest and actions at our nation’s Capitol!” Ned Lang said in an emailed statement to the newspaper. “We are praying for my son that he conquers his addictions and finds a new path forward in his life!” Ned Lang did not respond to messages from ProPublica seeking comment.

Jake Lang’s public social media accounts depict him as an internet-savvy serial entrepreneur, with one now-defunct Instagram account, @jakevape, chronicling hashtagged trips to Coachella, California, and to Art Basel in Miami. Public records show he had moved through various business ventures, from one selling vaporizers to another selling custom baseball hats. For a time, he ran Social Model Management, which promised to help prospective models get “social media famous” by unlocking “industry secrets” that would triple their Instagram followers. 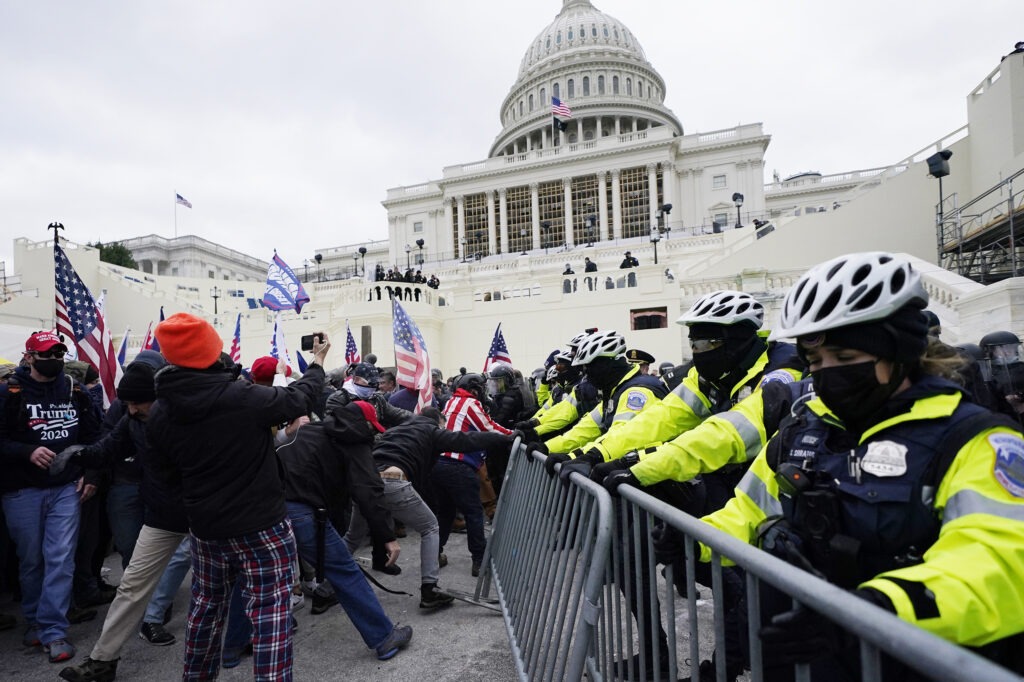 A mob of people break through a police barrier early on during the siege on the U.S. Capitol on Wednesday, Jan. 6, 2021. CREDIT: John Minchillo/AP

More recent social media posts by Lang acknowledged his struggle to stay sober and a deepening interest in religion. In an Instagram post from last year, tagged “#ChristEnergy,” Lang set goals for himself to memorize the Hebrew alphabet and stay kosher.

After his participation in the Capitol insurrection, Lang seemingly turned his online audience-building skills to a new mission: On the evening of Jan. 8, he turned to Instagram to send a round of invitations to join his private Telegram group, appealing to “patriots” willing to act locally and nationally as an armed paramilitary.

When new members joined the group, he emphasized they should remain anonymous by hiding their phone numbers and changing their usernames to “@Patriot[name].” He urged members to avoid chitchat and any specifics about future actions. Some floated gatherings on Inauguration Day or a few days before in state capitals, although others warned that protests on those days could be a trap. Participants were told they’d be vetted “to make sure they are who they claim to be,” wrote user Silence DoGood, before they were added to their local group chats by regional leaders.

Lang repeatedly used photos and videos of himself from the Capitol insurrection to stress the importance of military-style organization in future attacks.

“A woman just died in this video being trampled by DC police because we aren’t organized as patriots,” Lang posted on Jan. 10, an apparent reference to Rosanne Boyland, who died in a stampede at the Capitol. “This was my carnal cry for the real men to step up and help.”

Replied one member, who went by the username Tony Bologna: “Damn brother! Amen.”

“It was the first battle of the Second American Revolution- make no mistakes,” Lang continued. “This is WAR.” He posted a code of conduct in the group, as well as a set of meme-like instructions for members to prepare for a national “blackout,” buying long-range walkie-talkies and stocking up on guns, ammo and food.

“It’s really happening huh?” asked another user, Alastair. Lang replied with a video attachment, again of himself outside of the Capitol: “Do not be afraid of these tyrants.”

Some of the chat’s new recruits referred to Lang in language borrowed from the military. When one new member asked who the group’s leader was, another replied: “GENERAL JAKE😈😈😈 Your soldiers are reporting for duty.”

One user, dubbed Nomad, appointed himself a regional organizer in western Michigan, while another volunteered to boost the group’s ranks in central Florida.

“This is grass roots,” wrote Patriot Captain RedorDead, who claimed to invite 20 prospective recruits from a local gym. “This is real.” Lang also encouraged recruiting at local gun shops.

He chastised members who veered into more social territory. “Guys please this is a MILITIA group to defend our country from communism – private message each other if you want to flirt. Only warning.”

While the idea was to organize a coherent strategy ahead of Jan. 20, when President Joe Biden would be sworn in, the group didn’t appear to coalesce around one. Lang offered few details: “The plan for now is to Martin Luther king style March on 17th and 20th, exercising our Rights (that means armed),” he wrote on Jan. 13. “Peace and God be the forefront of all of what we do. But we cannot not show up and appear weak! That is not an option.”

There’s no sign those in the chats took action on those days, but experts like Cooter warn against writing off their intentions as chatroom bluster. While most new online militia groups “are probably keyboard warriors and nothing more,” she cautioned, “we don’t know that for sure, and I don’t think we can be complacent about a real risk from even a small minority of such groups.”

Experts have warned about the dangers of online echo chambers for years, but deplatforming may bring other risks, said Josh Pasek, a political science and communication and media professor at the University of Michigan. “The concern is much larger if the selection of which platforms people are using in the first place is itself more polarized. The chance that they make themselves far more extreme is high.”

He added: “The Capitol riot isn’t the end of much. What happens online can move offline. We’ve seen way too many examples of that to ignore it at this point.”

“Seems as though the FEDs aren’t fucking around…” wrote one member.

Some members left, but others vowed to stick around. “I’m still going to stay in the group in case he comes back, which is unlikely, but we may have to continue where he left off,” Patriot Zoomer said.

“The group is still here,” added PatriotLos. “Being patriotic is a lifestyle. Everyone has the capability to lead so don’t get lost.”

Do you have access to information about the Capitol attack that should be public? Email [email protected]. Here’s how to send tips and documents to ProPublica securely.