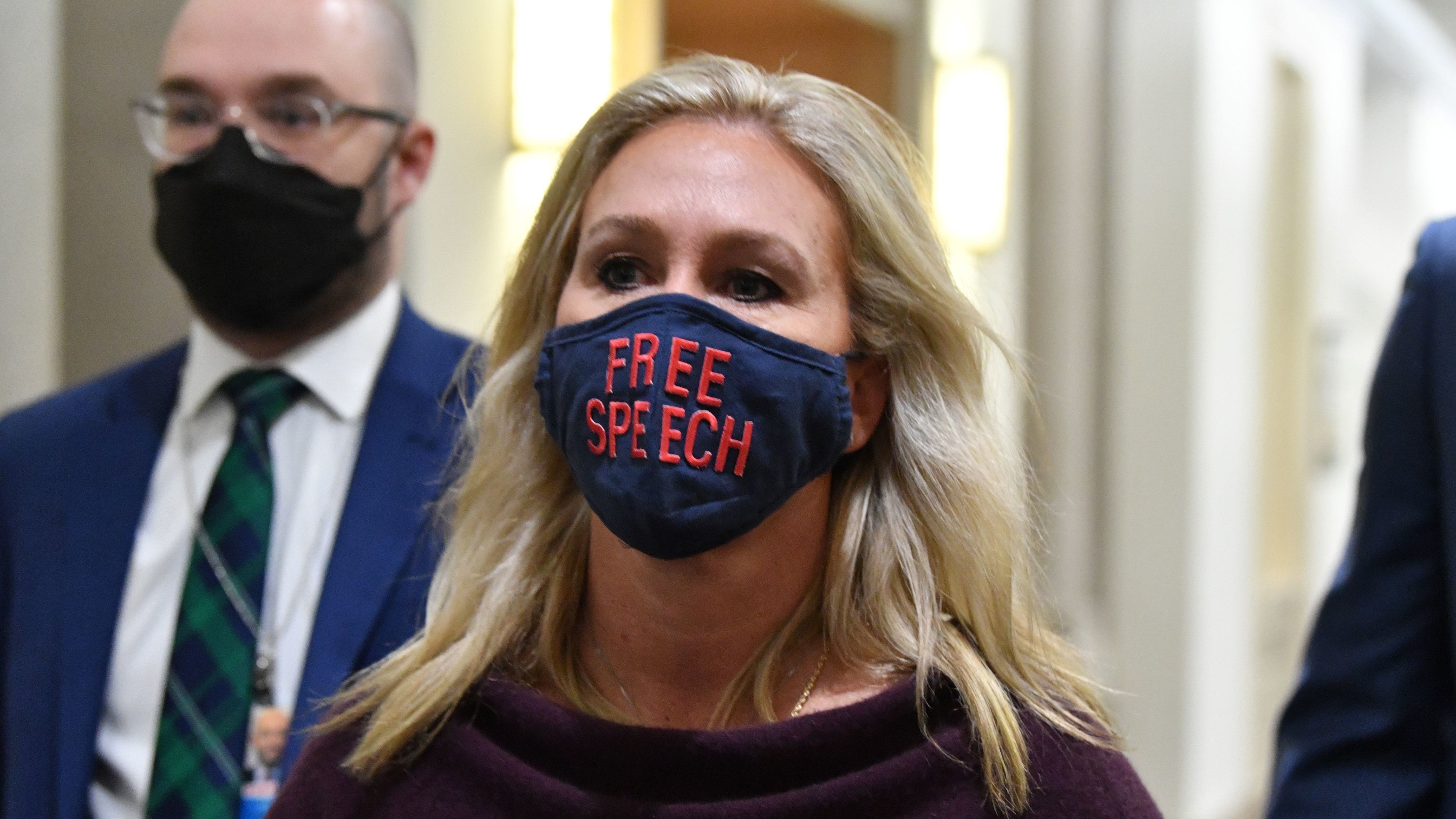 The House of Representatives has voted to strip Republican Rep. Marjorie Taylor Greene of her committee assignments, following uproar over her past incendiary comments and apparent support of violence against Democrats. The vote was 230 to 199.

The vote comes a day after the House Rules Committee advanced a resolution, put forth by Rep. Debbie Wasserman Schultz, D-Fla., to remove Greene from her assignments on the Budget panel and the Education and Labor Committee.

The Georgia freshman has come under fire in recent weeks for her history of trafficking in racism, anti-Semitism and baseless conspiracy theories, along with her support for online comments encouraging violence against Democratic officials prior to taking office.

Greene spoke on the House floor ahead of the vote and said her past comments “do not represent me.”

Calling herself a “very regular American,” Greene said she “stumbled across” the far-right QAnon conspiracy theory at the end of 2017 but stopped believing in it a year later when she “started finding misinformation.” But Greene has continued to spread false, QAnon-fueled theories since then, telling a local news reporter in July 2020 that she was “concerned about a deep state.”

“I was allowed to believe things that weren’t true,” she said on the House floor Thursday. “I would ask questions about them and talk about them and that is absolutely what I regret.” 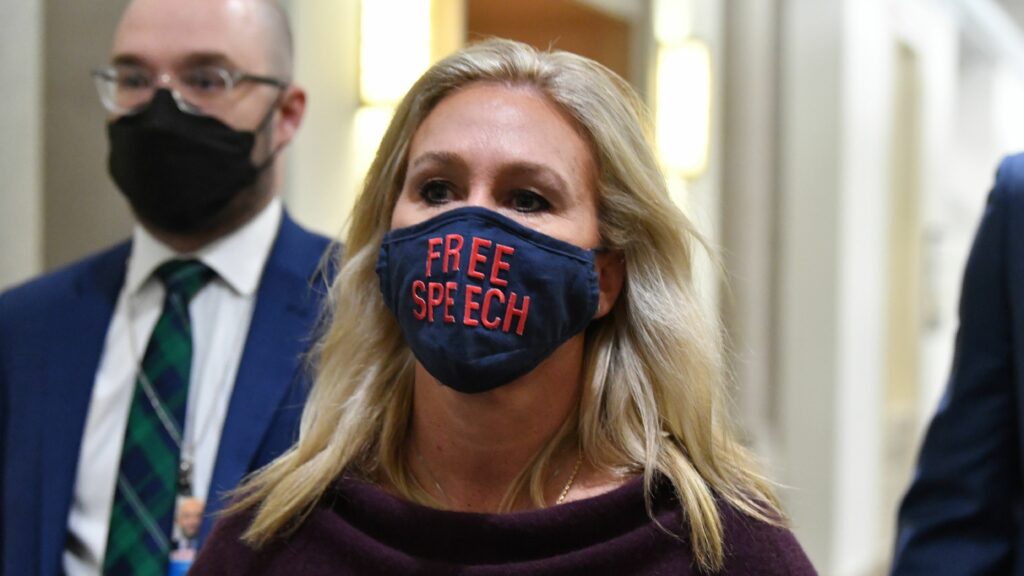 Rep. Marjorie Taylor Greene, R-Ga., faces a vote over whether she should be removed from her two committee assignments because her past comments and social media posts promoting conspiracy theories and violence.
CREDIT: Nicholas Kamm/AFP via Getty Images

Greene went on to say, “If it weren’t for the Facebook post and comments that I liked in 2018, I wouldn’t be standing here today and you couldn’t point a finger and accuse me of anything wrong.”

She then went through a litany of retractions of past statements, saying school shootings are “absolutely real” and the Sept. 11 terrorist attacks “absolutely happened.”

She recounted: “I remember [9/11] crying all day long, watching it on the news. It’s a tragedy for anyone to say it didn’t happen.”

But back in 2018, Greene promoted Sept. 11 conspiracy theories while speaking to the American Priority Conference.

Her comments Thursday on school shootings follow a resurfaced video of her berating and mocking a Florida school shooting survivor. She’s also faced criticism for a series of videos unearthed by Politico in June in which she made numerous racist and anti-Semitic remarks.

Rep. Jim McGovern, D-Mass., responded to Greene’s remarks on the floor, noting her defense sidestepped her “liking” social media posts prior to her election that advocated for violence against Democratic leaders.

“I just have to say that I did not hear a disavowment or an apology for those things. I did not hear an apology or denouncement for the claim, the insinuation that political opponents should be violently dealt with. I didn’t hear anybody apologize or retract the anti-Semitic and Islamophobic remarks that had been made that have been posted over and over and over again.”

Rep. Tom Cole, R-Okla., distanced himself from Greene’s past rhetoric but said the issue of kicking her off of committees should be adjudicated by the House Ethics Committee.

“What the majority is really proposing to do today is establish a new standard for punishing members for conduct before they ever became a member,” he said. “This change opens up troubling questions about how we judge future members of Congress and whether or not we as an institution should impose sanctions on members for actions they took before they were even candidates for office.”

McGovern countered saying he “hopes” the resolution does, in fact, set a precedent.

“Because if this isn’t the bottom, then I don’t know what the hell is,” he said. “I hope we are setting a clear standard for what we will not tolerate. Anyone who suggests putting a bullet in the head of a member shouldn’t serve on any committee period.”

He added that Greene has been profiting off of her past remarks, referencing a tweet from Greene where she says she “will never back down.” Greene tweeted that she has raised over $160,000 on Tuesday alone.

“If anyone has any question about the things that she has said or done, anybody who’s watching, just spend a moment and look at her social media posts, don’t take my word for it. Go research it for yourself. Google it. It’s all there,” McGovern said.

“I’m a big believer in the ethics committee process, but I don’t need an investigation to tell me what I can read with my own eyes.”

In a powerful moment, House Majority Leader Steny Hoyer, D-Md., walked around the floor showing his colleagues a poster featuring a screenshot of a Facebook ad on Greene’s campaign page.

The image featured a photo of Greene holding a gun alongside isolated images of Democratic Reps. Alexandria Ocasio-Cortez, Ilhan Omar and Rashida Tlaib. Underneath was the caption: “Squad’s worst nightmare.”

“I urge my colleagues can look at that image and tell me what message you think it sends,” Hoyer said. “Here she is armed with a deadly assault rifle pointed toward three Democratic members.”

Hoyer added: “In 2019, during the same election cycle in which she ran, [Greene] showed support for comments online that the quickest way to remove [House] Speaker Pelosi from power would be, and I quote, a bullet to the head. Did any of you hear Steve King say anything like that?” referencing the former Iowa congressman who was removed from committee assignments for comments on white supremacy.

Democrats repeatedly pointed to the lack of action by House Minority Leader Kevin McCarthy on behalf of Republicans. McCarthy released a statement Wednesday night condemning Greene’s past comments but didn’t indicate that any party disciplinary action would be taken against her.

For her part, Greene has touted a particular ally in her corner: former President Donald Trump.

She tweeted Saturday that she had a “GREAT call” with him and that she is grateful for his support. Trump has not publicly commented on this week’s actions.

Greene has been rebuked many in her own party, though, including Senate Minority Leader Mitch McConnell, who called rhetoric like hers a “cancer” on the GOP.

Greene is not the only Republican congresswoman who faced questions about her political future this week.

Wyoming Rep. Liz Cheney, the No. 3 Republican in the House, was the subject of discussions in the GOP Conference over her vote to impeach Trump. Late Wednesday night, House Republicans voted to keep Cheney in her leadership position.