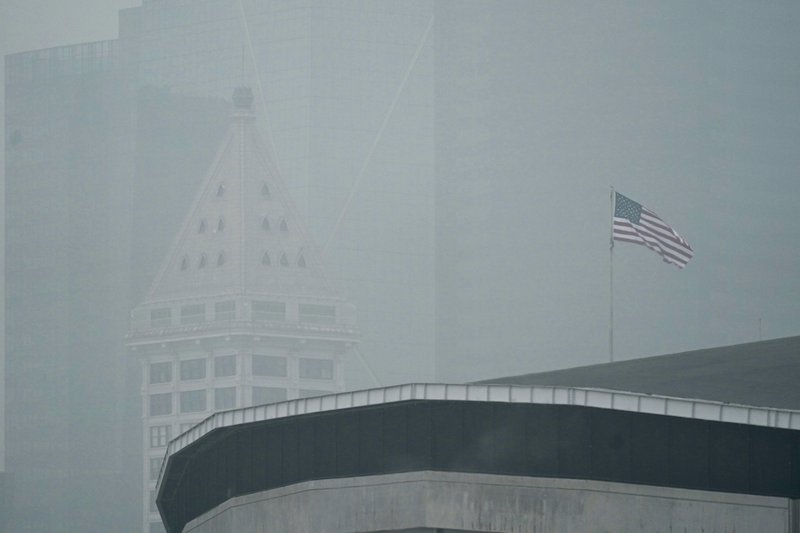 The damage caused by wildfires can be devastating, gutting structures and driving out people who live and work nearby. And researchers say the smoke from the annually recurring blazes also delivers economic damage to areas that were never touched by the flames.

Beyond the toll wildfire smoke can have on the health of those in affected areas, there are infrastructure and business costs, experts said.

Expenses paid by homeowners to improve or increase measures to protect their properties and the impact of smoke on livelihoods and budgets can be significant.

Wildfires that burned thousands of square miles throughout the U.S. West last year knocked out power, destroyed homes and buildings and forced evacuations.

Oregon and Colorado fires damaged or destroyed more than 10,000 buildings. Five of the six largest wildfires in California’s history occurred in 2020.

In this Sept. 14, 2020 photo, a U.S. flag flies near Smith Tower in downtown Seattle as air thick with smoke from wildfires as seen over CenturyLink Field. The damage caused by wildfires can be devastating, yet researchers say the smoke from the annually recurring blazes also delivers economic damage to areas that were never touched by the flames. CREDIT: Ted S. Warren/AP

Accompanying the fires was smoke that left Western communities immersed in gray and orange haze that blotted the sky and caused normally hot midday temperatures to remain at cool nighttime levels in some areas.

Wildfire smoke plumes – and their economic impact – can travel far beyond the blazes, said Eric Zou, assistant professor of economics at the University of Oregon.

“When we think about health and labor market effects of wildfire, it is important to think beyond the areas in the immediate vicinity of the fires,” Zou said.

Zou coauthored a paper with University of Illinois economists Mark Borgschulte and David Molitor on the economic effects of wildfires that was presented to an American Economic Association conference in January 2020. Molitor said there is a quantifiable economic relationship to the amount of smoke reaching communities.

“We estimate that an additional day of smoke exposure reduces earnings by about 0.04% over two years,” Molitor said. “The effect is largest in the year of smoke exposure, but the effects may linger for up to two years post-exposure.”

Benjamin Jones, assistant professor of economics at the University of New Mexico, said researchers are only beginning to understand the extent to which wildfire smoke impacts local economies.

“It is certainly possible, perhaps even likely, that the economic effects of wildfire smoke exposure may persist for months or even years after a large smoke event,” he said.

Prolonged and intense fires like those in the Pacific Northwest last year may affect people’s health “in such a significant way that there are longer-term impacts to local economies well after the wildfire that caused the smoke has been extinguished,” Jones said.

Two of the most visible industries impacted by wildfire smoke are tourism and outdoor recreation. Jones cited U.S. Bureau of Economic Analysis calculations that found the outdoor recreation economy accounted for $459.8 billion in 2019, or 2.1% of the national gross domestic product, which is the sum of all goods and services produced within a country’s borders.

“People tend to avoid national and state parks when wildfire smoke is present, which can depress local accommodation, hospitality and outdoor recreation industries, especially in rural areas in the American West,” Jones said.

A study released last October by the Urban Land Institute, a global organization of real estate and land use experts, found that real estate development is increasing in areas already prone to wildfires, with the results for urban centers including displaced populations and smoke damage.

“For many major markets, wildfire smoke is projected to be a more frequent concern as climate change increases the number of wildfire burn days,” Foster said.

“Structures built to wildfire-informed building codes survive at higher rates, depending on the characteristics and severity of the wildfire,” Foster said.

Some developers said homebuyers increasingly expect for wildfire risks to taken into consideration for the houses they are considering buying, “so a wildfire resilient development can be a competitive advantage,” Foster said.

Jones said he could envision a growing market for “smoke avoidance investments” such as better insulated houses and improved air filtration and purification systems for new homes, or as investments by current owners.

“Economists know that people take actions to prevent and reduce their exposure to air pollution, such as wildfire smoke, and it therefore seems likely that housing developers and potential and current homeowners are not going to be immune to these trends for the specific case of wildfire smoke,” Jones said.

Calculations by Western communities and business owners will need to take into consideration not just fires but the ensuing smoke. As Jones said, the wildfire season is growing longer and “smoke is here to stay” in the West.

“The potential economic impacts here may be quite large,” Jones said.