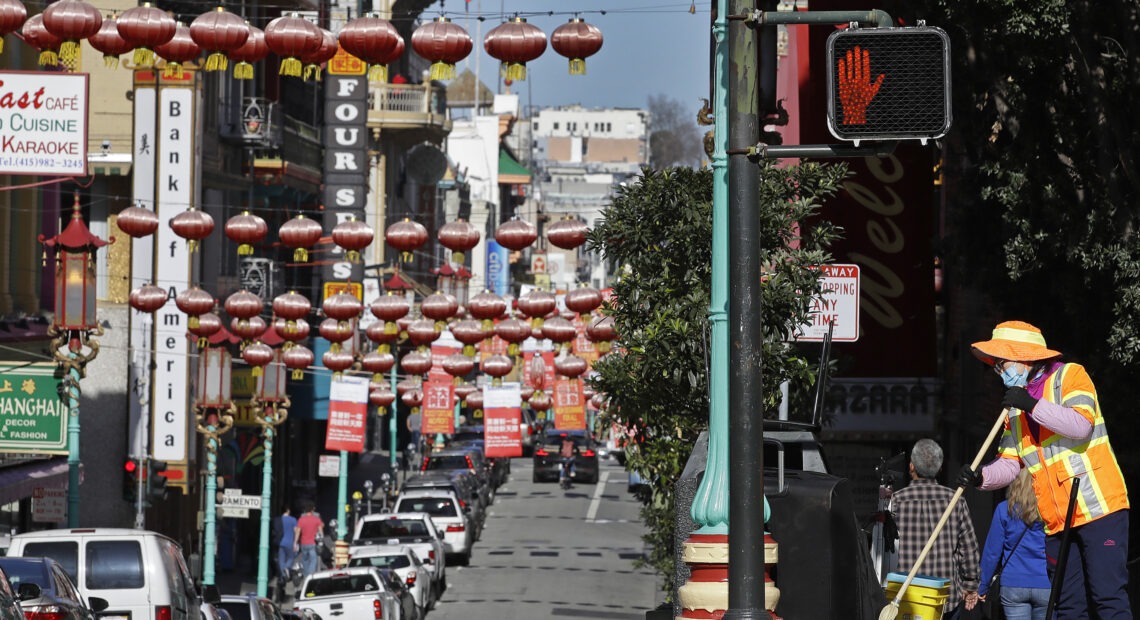 Business and civil rights groups in California are demanding action after a recent surge of xenophobic violence against Asian Americans in the San Francisco Bay Area left one person dead and others badly injured.

Just last week in San Jose, a 64-year-old grandmother was assaulted and robbed of cash she’d just withdrawn from an ATM for Lunar New Year gifts.

Surveillance cameras have captured many of the attacks, including one against a 91-year-old man in Oakland’s Chinatown, who was hospitalized with serious injuries after being shoved to the ground by a man who walked up behind him. 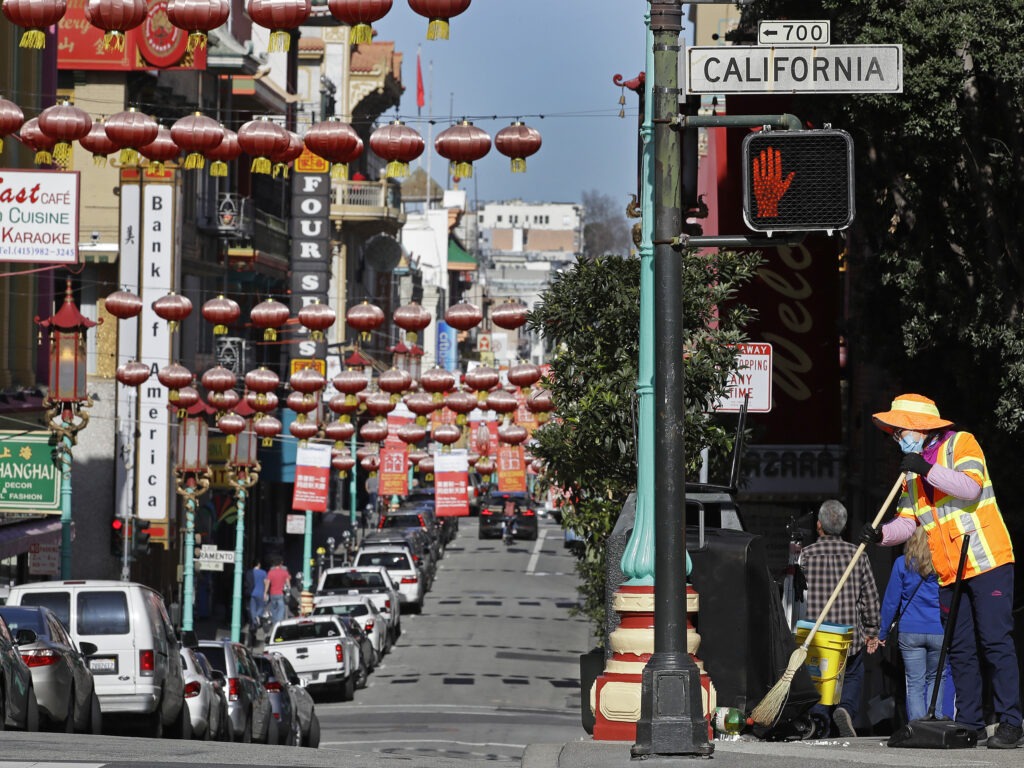 In this Jan. 31, 2020, file photo, a masked worker cleans a street in the Chinatown district in San Francisco. Police and volunteers have increased their street presence after a series of violent attacks against older Asian residents in Bay Area cities stoked fear and subdued the celebratory mood leading up to the Lunar New Year. CREDIT: Ben Margot/AP

In January, a 52-year-old Asian American woman was shot in the head with a flare gun, also in Chinatown.

Later in the month, 84-year-old Vicha Ratanapakdee was going for a morning walk in his San Francisco neighborhood. Surveillance cameras captured a man running at him full speed and smashing his frail body to the pavement. Ratanapakdee died of his injuries two days later. A 19-year-old man has been charged with murder and elder abuse.

“These attacks taking place in the Bay Area are part of a larger trend of anti-Asian American/Pacific Islander hate brought on in many ways by COVID-19, as well as some of the xenophobic policies and racist rhetoric that were pushed forward by the prior administration,” says Manju Kulkarni, executive director of the Asian Pacific Policy and Planning Council, a coalition of California community-based groups.

The more than two dozen recent assaults and robberies in the Bay Area mirror a national rise in hate crimes against older Asian Americans during the pandemic. From last March through the end of 2020, Kulkarni’s group has documented nearly 3,000 incidents of anti-Asian hate across 47 states and the District of Columbia.

“And roughly 7 to 8% of those, unfortunately, come from elders in our community who have experienced incidents, not unlike the ones that have taken place in recent days,” Kulkarni says.

Despite arrests in some of the high-profile attacks, the violence has prompted many Chinatown businesses to reduce hours during a normally bustling shopping period ahead of Friday’s Lunar New Year holiday.

Those celebrations are already severely curtailed and businesses here badly damaged by the ongoing pandemic.

“The fear is not only for the patrons but also employees,” says Carl Chan, head of Oakland’s Chinatown Chamber of Commerce. “They [businesses] are so fearful they prefer to close early. We also have many juveniles driving around Chinatown and carrying guns, so they’re also hurting people before they’re being robbed.”

Now, with the specter of crime, Chan says some community members are taking matters into their own hands. Half a dozen ad hoc volunteer groups have sprung up offering to protect businesses and older residents when they shop.

“Some of them are young people, they want to walk Chinatown,” he says. “And then also helping seniors pick up the groceries and then walk them home.”

Separately, more than 200 people across the area have volunteered to serve as “community strollers” in Chinatown starting next week.

In the wake of the attacks several Oakland city council members including Council President Nikki Fortunato Bas, whose district includes Chinatown, have joined social justice groups warning against scapegoating and calling for solidarity between Asian American and African American communities. The Oakland Anti Police-Terror Project has asked people “to wear yellow to show you’re in support of Chinatown seniors and businesses.”

The Bay Area attacks and increased harassment nationwide have rallied support from those in arts, too. Actor and director Daniel Wu, who also is an East Bay native, led an effort to help stop what he described recently as an epidemic of hate-fueled language.

“Racist rhetoric from the pandemic has targeted us as being the reason for the coronavirus,” Wu says, singling out phrases used by former President Trump to describe the outbreak’s origins.

“Asians across the board have been targeted by racial slurs, being attacked, being pushed around, being spat on.”

“Oftentimes, perpetrators have used the exact language of the prior president, words like ‘Wuhan virus, kung flu, China virus, China plague,’ “Kulkarni says. “And sometimes they have even weaponized the former president himself saying ‘Trump is going to get you, go back to your country.’ What President Trump did was to foment hate against Asian American communities and really put people in harm’s way. …We need so much work to be done to undo some of the harm of the prior administration.”

In San Francisco, the mayor, police chief and district attorney have all denounced the crimes and vowed to take action.

“This was a horrific, senseless attack, and I send my deepest condolences to the Ratanapakdee family for this unthinkable pain,” District Attorney Chesa Boudin said after the killing. His office has charged 19-year-old Antoine Watson with murder and elder abuse causing death. Watson has pleaded not guilty.

It’s not clear, however, that race or ethnicity played any role in the attack. “There is no evidence of motive related to hate,” says the DA’s spokesperson, Rachel Marshall, adding “the case is still under investigation.”

Across the bay in Oakland, Calif., police say they’ve added foot and car patrols and set up a mobile command post in Chinatown, measures the community welcomes.

Oakland police have made an arrest in the Jan. 31 Chinatown assaults on three older people. Yahya Muslim, 28, was charged with assault, battery and elder abuse. He has not been charged with hate crimes. Muslim already had two prior felony assault convictions, according to the Alameda County Sheriff and district attorney offices.

“It’s not unique to Chinatown or to the Asian community the increase in crime we’ve seen across the city and across the county, but we have seen in the last several weeks and month a very specific increase in crimes committed against Asians,” O’Malley told a press conference in Chinatown.

LeRonne Armstrong, who was sworn in as Oakland’s new police chief this week, says it’s not clear to what extent these attacks are race-based or if they have more to do with the coronavirus radically upending economic, social and school norms for nearly a year now.

“I believe there are some individuals in our community that have targeted people of different races,” he says noting that some offenders may see Asian Americans as less likely report crimes to law enforcement. “That’s why it’s so important that they report it, because we’ve seen significant under-reporting of crime that has happened in the Asian community,” the chief says.

The pandemic, chief Armstrong tells NPR, had certainly made it easier for criminals, with time on their hands, to mask up and often slip away unidentified.

“That’s why it’s so important that businesses and others that have video that they share with us. The mask wearing, although it’s required and I think very important for health reasons, it also is definitely a deterrence in identifying those that are responsible,” he says.

President Biden, meantime, recently signed a memorandum pledging to combat anti-Asian and Pacific Islander discrimination. It was part of a series of racial equity-focused executive orders.

Manju Kulkarni and others welcomed that move. But they’d like to see that order backed up by swift action.

“What the incidents in the Bay Area remind us of is that action is needed now,” Kulkarni says, “not a few months from now, not a few years from now.”