Pop culture has a genius for transforming painful history into enjoyable entertainment. It can turn Nazi POW camps into the sitcom Hogan’s Heroes. It can spin the murder of Israeli athletes into the thriller Munich. It can use the 1921 race massacre in Tulsa to kickstart the superhero saga Watchmen.

The emergence of AIDS provides the impetus for It’s a Sin, a hit British series about five young people who share a London apartment over the years from 1981 to ’91. The show is the semi-autobiographical brainchild of Russell T. Davies, a writer best known for creating Queer as Folk and resurrecting Doctor Who. With his gimlet eye for the pop jugular, Davies turns the story of that deadly pandemic into a soapy drama that, like many dance songs from that era, is equal parts bounciness and woe. 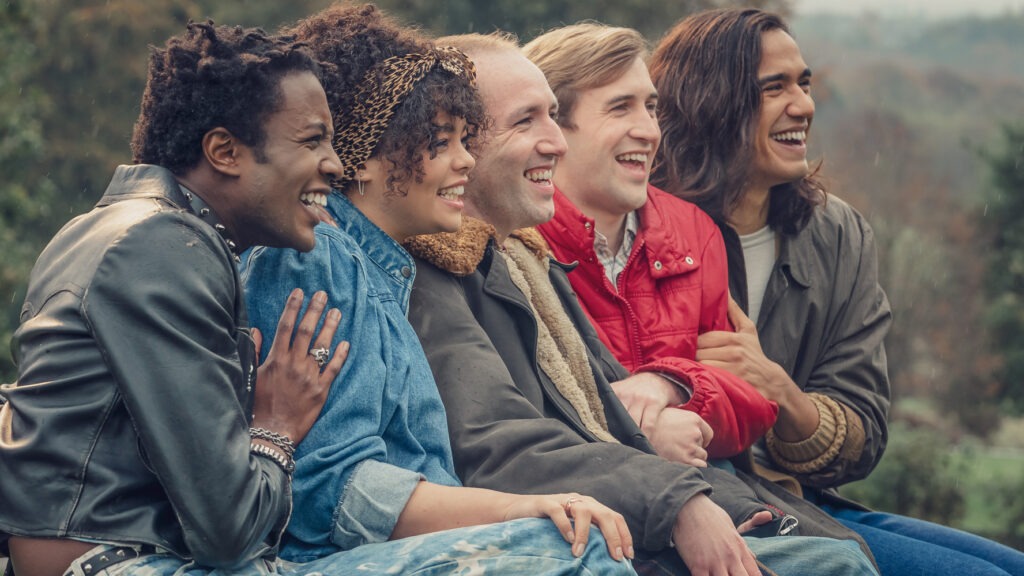 It’s a Sin follows a cast of characters (Omari Douglas, Lydia West, David Carlyle, Callum Scott Howells and Nathaniel Curtis) in London as they deal with the emergence of the AIDS epidemic.
CREDIT: Ben Blackall/HBO Max

The series begins with the coming together of five gay — or gay friendly — characters. There’s cocky, self-involved Ritchie (played by pop star Olly Alexander) who wants to be an actor. There’s campy Roscoe, who’s been booted from his home by his Nigerian Christian family and hooks up with a Conservative MP (Stephen Fry). There’s sturdy Ash Mukherjee, an attractive teacher, and the touchingly naive Colin, a young Welshman who works for a Savile Row tailor. Holding the house all together is Jill (Lydia West), another aspiring actor based on Davies’ real-life best friend.

By day, the five try to make their careers. By night, they party — laughing and dancing and shagging like sex is going out of style. Ritchie, the group’s showman, gives blithe speeches mocking rumors of a disease that attacks gay people. “How do I know it’s not true?” he asks. “Because I’m not stupid.” But he is wrong. The first real inkling comes from Colin’s gay mentor at the tailor shop, played by Neil Patrick Harris, when his longtime boyfriend is put in the hospital.

Davies’ shows have always known how to grab you, but even his admirers would never fault him for subtlety. Not overly concerned with getting things absolutely right, he largely ignores the lives of middle-aged gays and lesbians; he makes the gay clubs sleeker and less grungy than they actually were. If you want a deep and nuanced portrait of HIV hitting London during the Thatcher Era, you’ll do far better reading Alan Hollinghurst‘s novel The Line of Beauty.

The show’s aim is to make us feel both sides of gay life in those years. He celebrates its hedonistic freedom and sheer fun — the show’s fueled by songs from Blondie, Erasure, and the Pet Shop Boys, one of whose anthems gives this series its title.

But he also wants us to feel the tragedy. And we do. The show is unexpectedly moving, especially Colin’s thread. Characters we like die miserable deaths, and those who don’t struggle against both a profound sense of loss and a society that seemingly doesn’t care. Everyone is deepened, even the narcissistic Ritchie.

It’s a Sin is far from perfect. Davies originally wrote the show to be eight episodes but could only get funding for five, so the action feels rushed. More space might have let him give his female characters more dimension. While West makes a wonderful Jill, her character is so busy being saintly she has no inner complexity or even sexuality. At the other end, Ritchie’s mum — ferociously played by Keeley Hawes — displays such villainous rigidity that the role verges on misogyny.

Yet for all that, It’s a Sin resonates emotionally — especially during the pandemic. As with COVID-19, AIDS had its deniers and its conspiracy theorists. It had government heads who didn’t take it seriously and scads of ordinary people who, feeling unthreatened themselves, believed the victims were dispensable. And just like COVID-19, AIDS led to hundreds of thousands of people dying largely out of sight and often alone, cut off from those who knew them best and loved them most. Watching this series, you may think that the real sin is how we turn viruses into moral and political battles.