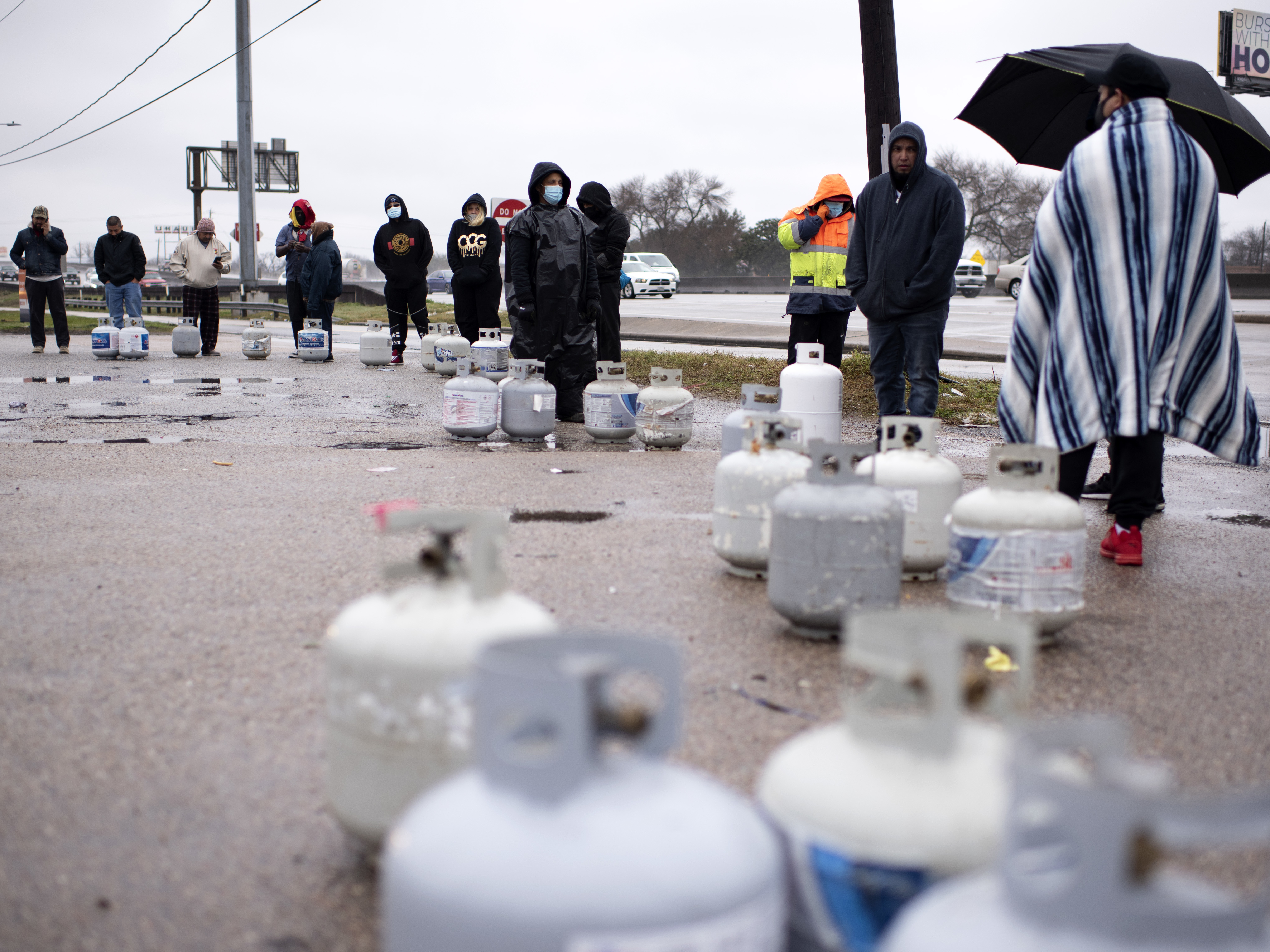 ‘A Disaster Within A Disaster’: Carbon Monoxide Poisoning Cases Are Surging In Texas

At least 300 cases, including two fatalities, were reported in Harris County — the state’s most populous — as of Tuesday night, according to Judge Lina Hidalgo. She called that number “just the tip of the iceberg,” saying it was likely much higher.

“The truth of the matter is, this carbon monoxide poisoning is in many ways a disaster within a disaster,” Hidalgo said.

State and local officials attribute most of the cases to the use of improper home heating sources, from devices like barbecue pits, charcoal grills and campfire stoves to practices like running portable generators and car engines indoors. These mechanisms all release carbon monoxide, a colorless, odorless gas that at certain levels can cause permanent brain damage or death in mere minutes.

People in Houston wait in line to fill their propane tanks on Wednesday amidst widespread power outages related to the winter storm. Cases of carbon monoxide poisoning in the state have increased in recent days, with officials attributing most to the improper use of heating devices like charcoal grills and portable generators.
CREDIT: Mark Felix/The Washington Post via Getty Images

“Much of these poisoning calls … they’re due to bringing grills into the house, turning cars on in garages, basically using outdoor equipment inside,” Hidalgo said. “You can use that equipment to stay warm, just don’t use it in your home.”

The improper use of portable generators, which can provide life-saving power but be fatal when run inside homes or garages, is a reliable source of fatalities after major weather events and took some 900 lives between 2005 and 2017.

Harris County Fire Marshal Laurie Christensen said on Tuesday there had been so many carbon monoxide incidents and calls that officials could not track them all.

She implored residents to heed safety advice: leave grills and generators far away from windows, doors and vent openings; keep grills outside even once they’ve been turned off; avoid using ovens and stoves for heat and place generators 10 to 20 feet away from the home.

“Get all the blankets you can, dress in layers, huddle up together as a family,” Christensen said. “Do what you have to do to stay warm, but please remember the hazards of carbon monoxide.”

Dr. Samuel Prater, an emergency physician at Memorial-Hermann Health System in Houston, told NPR’s All Things Considered that his emergency room saw nearly 60 carbon monoxide cases on Monday and almost 40 on Tuesday, with more than half of them children.

He said the unprecedented winter event has driven many people, particularly parents, to try to find warmth however they can.

“These are folks with the best of intentions who are just feeling desperate and trying to get themselves warm – more importantly, trying to get their children warm – and resorting to unusual means,” he said.

Incidents have been reported sporadically by local officials, fire departments and hospitals in recent days. The surge in poisonings also prompted the Texas Department of State Health Services to issue a bulletin urging residents to “use extreme caution” with generators and other carbon monoxide-producing heat sources.

Incidents of carbon monoxide poisoning have risen in the last few days. Please remember NOT to bring any outdoor appliances (grills, etc.) inside, or run your car inside the garage. Be safe and stay warm! #wintersafety pic.twitter.com/Z18BQMY0kO

On Tuesday, The Cy-Fair Fire Department in Harris County reported transporting 14 people, including seven children, to hospitals for carbon monoxide poisoning after they used grills to heat their homes. It later transported another nine, saying two families had reportedly used charcoal grills indoors.

Capt. Daniel Arizpe of the Cy-Fair Fire Department told NPR by email that as of 1:30 p.m. local time on Thursday, the department had responded to 18 incidents involving 40 patients, 26 of whom were transported with “measurable CO levels.”

Houston police reported two carbon monoxide-related fatalities on Tuesday, when they said officers making a welfare check discovered a family of four who were poisoned after seemingly running a car in their attached garage for warmth. The adult female and female child did not survive, they said, while the adult male and male child were transported to the hospital.

And in Fort Worth, Cook Children’s Medical Center said it treated at least 13 patients on Monday night whose families were attempting to heat their homes, either with propane- or diesel-burning engines meant to be used outdoors, or portable generators placed too close to the home. Treatment for carbon monoxide poisoning involves breathing in pure oxygen.

“Carbon monoxide poisoning prevents your blood from being able to buy into oxygen,” explained Dr. Sam Selby, an emergency physician at Cook Children’s. “You suffocate while you are still breathing.”

In a series of tweets, the U.S. Consumer Product Safety Commission urged people to use home heating devices properly and to remind any friends and family members experiencing power outages about the dangers of carbon monoxide, saying a quick check-in could save lives.

It also encouraged people to take stock of the safety of their own homes, like checking the status of extinguishers and carbon monoxide detectors — things that sound like common sense, the CPSC said, which is why they are often forgotten.

“Also, when a crisis is happening, and it doesn’t affect you personally, your reaction should be self-reflection, not shaming,” it added, emphasizing the “desire to improve the quality of safety in your own life, not gawk at the lack of safety in someone else’s.”