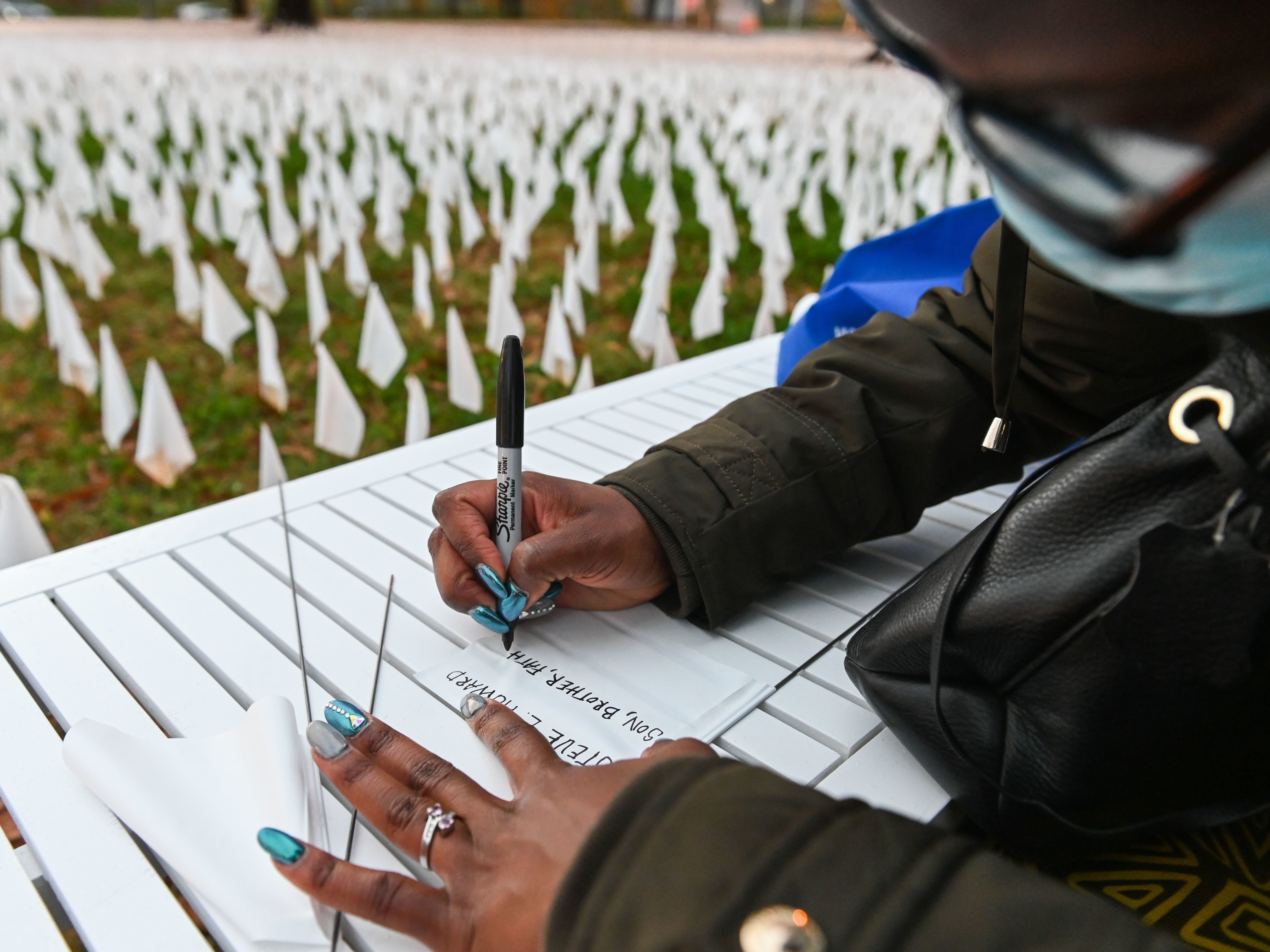 Report: American Life Expectancy Dropped By A Full Year In 1st Half Of 2020

The average U.S. life expectancy dropped by a year in the first half of 2020, according to a new report from the National Center for Health Statistics, a part of the Centers for Disease Control and Prevention.

Deaths from COVID-19 are the main factor in the overall drop in U.S. life expectancy between January and June 2020, the CDC says. But it’s not the only one: A surge in drug overdose deaths are a part of the decline, too.

Patrice Howard writes on white flags before planting them to remember her recently deceased father and close friends in November at “IN AMERICA How Could This Happen…,” a public art installation in Washington, D.C. Led by artist Suzanne Firstenberg, volunteers planted white flags in a field to symbolize each life lost to COVID-19 in the U.S.
CREDIT: Roberto Schmidt/AFP via Getty Images

“If you’ll recall, in recent pre-pandemic years there were slight drops in life expectancy due in part to the rise in overdose deaths,” explains NCHC spokesperson Jeff Lancashire in an email to NPR. “So they are likely contributing here as well but we don’t know to what degree. COVID-19 is responsible for an estimated 2/3 of all excess deaths in 2020, and excess deaths are driving the decline.”

Throughout the coronavirus pandemic, Black and Latino Americans have died from COVID-19 at disproportionately high rates.

Women tend to live longer than men, and in the first half of 2020, that margin grew: The difference in their life expectancy widened to 5.4 years, from 5.1 in 2019.

Its authors point out a few limitations in these estimates. One is that the data is from the first six months of 2020 – so it does not reflect the entirety of the COVID-19 pandemic. There is also seasonality in death patterns, with more deaths generally happening in winter than summer. This half-year data does not account for that.

Another limitation is that the COVID-19 pandemic struck different parts of the U.S. at different times in the year. The areas most affected in the first half of 2020 are more urban and have different demographics than the areas hit hard by the virus later in the year.

As a result, the authors write, “life expectancy at birth for the first half of 2020 may be underestimated since the populations more severely affected, Hispanic and non-Hispanic black populations, are more likely to live in urban areas.”

The report parallels the findings published last month by researchers at the University of Southern California and Princeton University, which found that the deaths caused by COVID-19 have reduced overall life expectancy by 1.13 years.

In the U.S., more than 488,000 people have died from COVID-19. The latest estimates from the University of Washington’s Institute of Health Metrics and Evaluation predict 614,503 U.S. deaths by June 1.