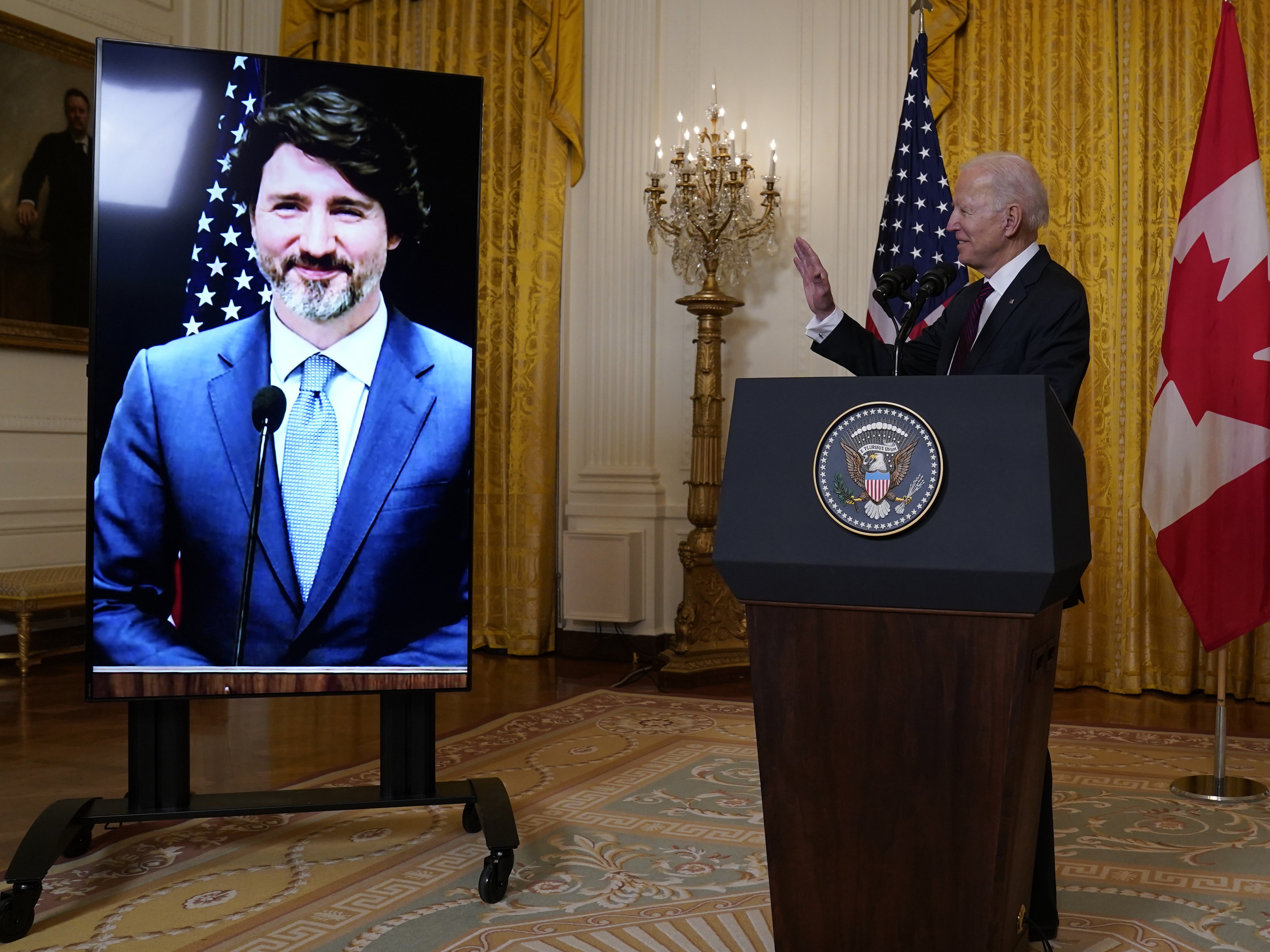 In An Awkward Virtual Visit, Biden Welcomed Canada’s Trudeau To The White House

President Biden welcomed Prime Minister Justin Trudeau and a delegation of Canadian officials to the White House virtually on Tuesday – saying the U.S. has “no closer friend” than its neighbor to the north.

There was no handshake between leaders or stroll down the White House colonnade during the session that was virtual due to COVID-19 constraints. But, the White House attempted to recreate some of the ceremonial flourishes of an in-person visit to Washington.

The results were a bit awkward, at least in the imagery. Trudeau appeared larger-than-life on a giant monitor for Biden’s closing remarks. On YouTube, the leaders’ images appeared side by side, but Trudeau appeared to be looking in the wrong direction, away from Biden. 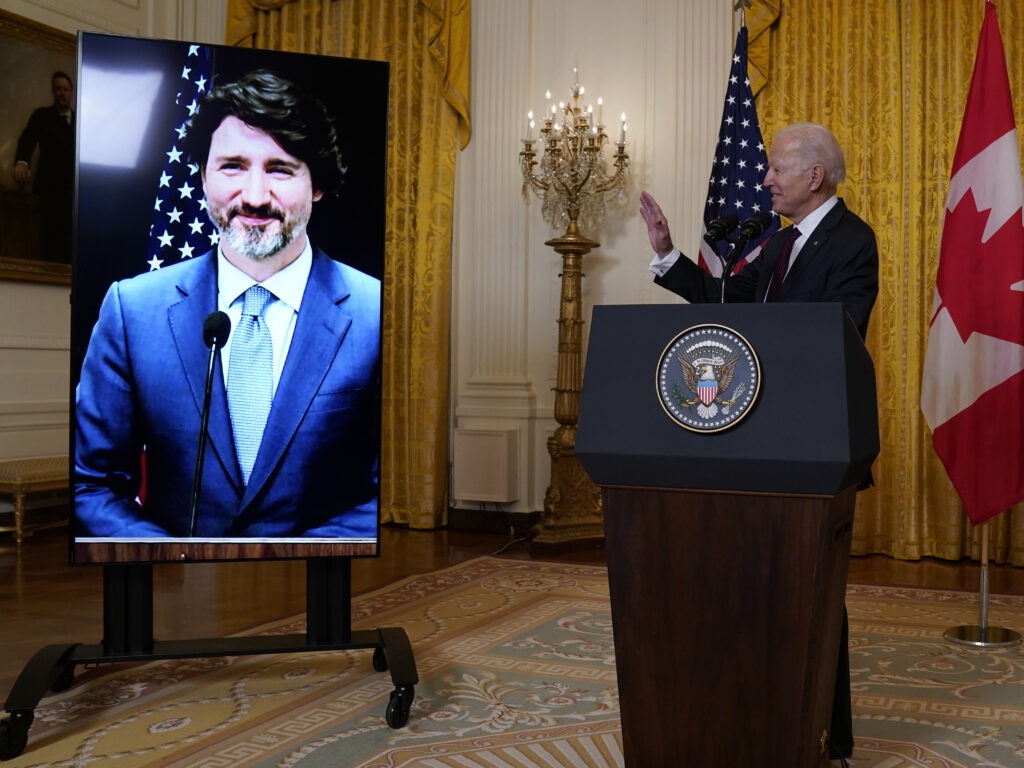 The White House tried to simulate some of the pomp of an official visit during a virtual meeting between President Biden and Canadian Prime Minister Justin Trudeau on Tuesday. CREDIT: Evan Vucci/AP

But the sentiments seemed to be warm. “The United States has no closer friend than Canada. That’s why you were my first call as president, my first bilateral meeting,” Biden told Trudeau at the start of the visit, as he and Vice President Harris sat at a long table in the Roosevelt Room, while Trudeau and his team appeared on a large video monitor set up at the other end of the table.

Biden and Trudeau agreed to work together on the public health and economic crises caused by the pandemic, as well as shared goals on addressing climate change, addressing racism and discrimination.

Biden worked with Trudeau, the leader of Canada’s center-left Liberal Party, when he was vice president during the former Obama administration. But U.S.-Canada ties were tested by trade tensions during former President Donald Trump’s term.

Trump blew up after Trudeau talked tough at the end a G7 summit in Canada in 2018. The following year, at a NATO summit in London, Trudeau was caught on a hot mic complaining about how long Trump held court with reporters, after which Trump called him “two-faced.”

The bilateral meeting between Biden and Trudeau represents a turning of the page from that more contentious era, said Kathryn Friedman, a law professor at the University at Buffalo, who specializes in U.S.-Canada policy.

“It sends a signal to the world, along with all of the other signals that President Biden has been sending over the past month, that he is interested in building alliances and interested in using diplomacy as a tool,” Friedman said.

There have been flashpoints since Biden took office. On his first day, Biden revoked a permit for the Keystone XL crude oil pipeline from Canada. “The decision will not be reconsidered,” a U.S. official told reporters ahead of the meeting.

Canadians also have been angered that their government has been unable to secure COVID-19 vaccines from Pfizer and Moderna at plants close to the Canada-U.S. border, being relegated instead to ordering from Europe. 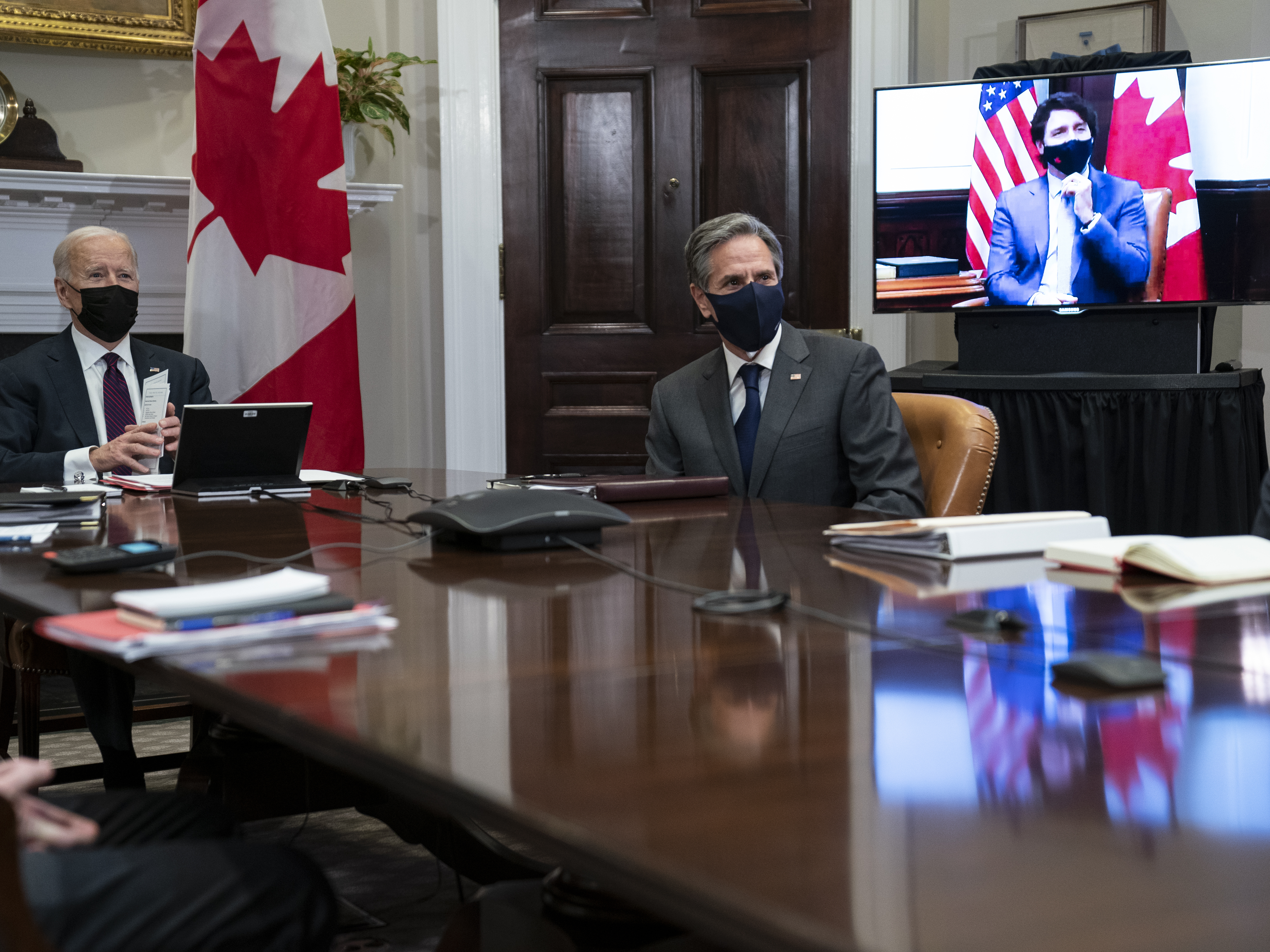 President Biden and his team, including Secretary of State Antony Blinken, met virtually with Canadian Prime Minister Justin Trudeau in the Roosevelt Room of the White House. CREDIT: Evan Vucci/AP

Friedman said that as long as the U.S. struggles to ramp up supply and distribution domestically, Biden will likely be reluctant to be seen as shipping vaccines to foreign countries.

“The president is just in a tough position,” Friedman said. “He politically needs to ensure that if not every single person in the United States is vaccinated before we start shipping it to other countries, that we are really well on the way to having folks vaccinated. ”

Trudeau has also pressed U.S. officials to help secure the release of two Canadians detained by China in 2018 after Canada detained a top official from Huawei Technologies Co. for a U.S. extradition warrant. Biden expressed support, although he did not go further to say what, if anything, his administration was prepared to do to help. “Human beings are not bartering chips,” he said.