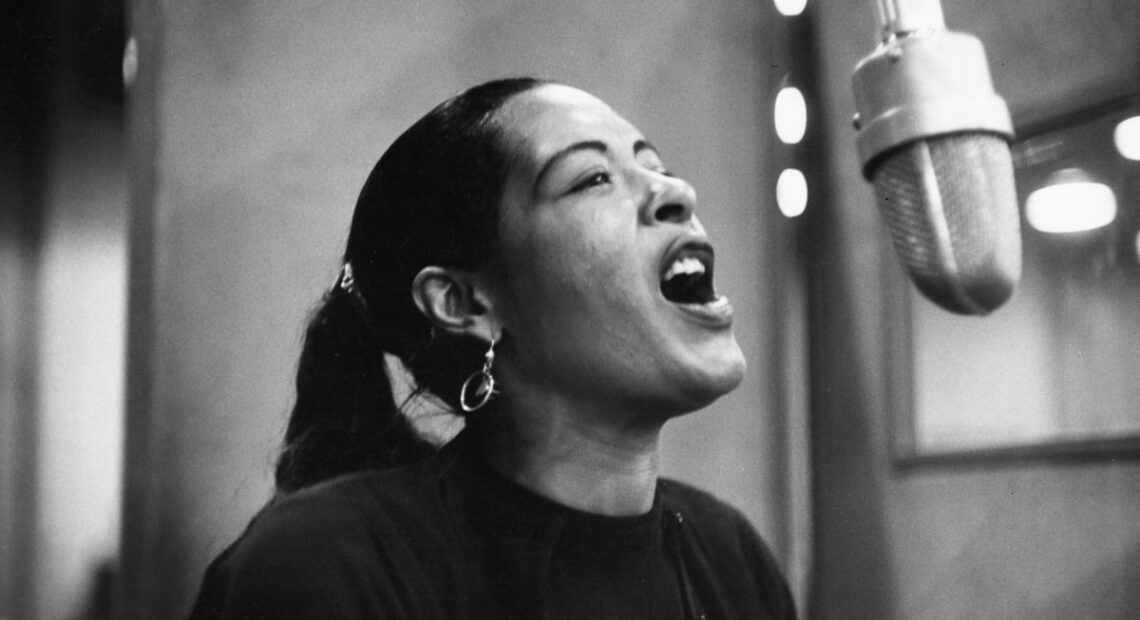 After a long night of dazzling audiences with her voice, Billie Holiday would change gears.

All the lights in the house would go dark. The wait staff would turn still. The audience, often largely white, would either wait, in discomfort, or leave, knowing what was to come. On stage, a single spotlight illuminated the jazz artist’s face. And then Holiday, the glamorous jazz singer, would end her set with “Strange Fruit,” a song of protest against lynchings. There would be no encore.

Holiday first sang “Strange Fruit” in 1939 at Café Society, the first integrated nightclub in New York City. The lyrics were written by a Jewish teacher and activist named Abel Merpool as a poem titled “Bitter Fruit.” Holiday incorporated the song into her routine set list, despite pushback from crowds and the U.S. government, which sought to silence her singing while targeting her for drug use. In her words, the song “seemed to spell out all the things that had killed Pop.” While her father wasn’t lynched, Holiday believed the denial of his care from multiple “whites-only” hospitals was, in its own way, a kind of murder. 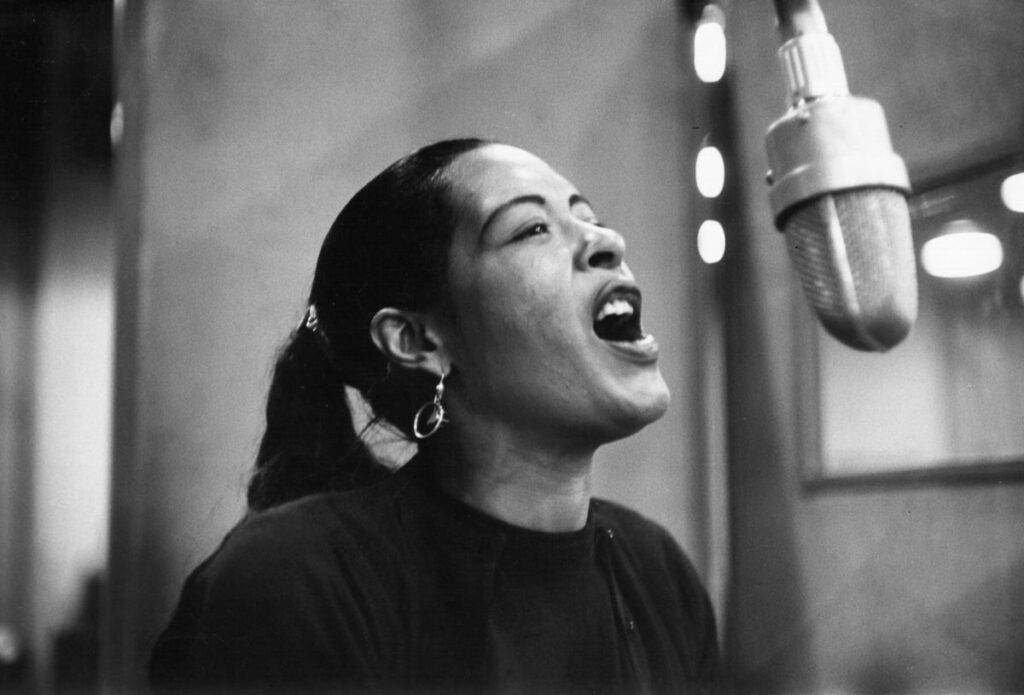 Today, “Strange Fruit” is the crown atop Holiday’s legacy, a protest song known for its haunting lyrics, brought to life by an uncompromising performer.

“She was willing to risk [her success] to express her own form of political protest,” said Farah Jasmine Griffin, chair of the Department of African American and African Diaspora Studies at Columbia University. “I don’t think we would have ever heard of [“Strange Fruit”] if Billie Holiday didn’t sing it.”

During Holiday’s time, desecrating Black bodies were public events, and while lynchings are less commonplace today, the proximity to America’s past racial terror and violence is still very much present. When a mob of Trump supporters attacked the U.S. Capitol on Jan. 6, a noose and gallows was erected outside the federal building. A noose is a specific kind of threat, and without uttering a word, reminded us of the kind of violence Holiday sang against with “Strange Fruit.”

“Cops are still killing black people and getting off,” Griffin said. “What [“Strange Fruit”] is confronting, we still live with today. It still speaks to us — and we don’t want it to. We wish it didn’t.”

This month, the song is given fresh attention in the film “The United States vs. Billie Holiday,” directed by Lee Daniels and starring Andra Day as the late singer. It’s the latest of the films that have sought to capture Holiday’s life and magic, from James Erskine’s documentary “Billie” in 2020 to Sidney J. Furie’s “Lady Sings the Blues” in 1972. Diana Ross played the titular role in that film nearly five decades ago, which was loosely based on Holiday’s 1956 autobiography of the same name.

Playing Holiday was Day’s first-ever acting role. The legend’s singing stuck with Day because “her songs were rooted in truth.”

“I think the only way to tell Billie Holiday’s story is in its truth because her truth is so amazing,” Day told the PBS NewsHour. “You really don’t need to add or take anything away from her truth for it to be a compelling story.”

Outside of films, the story of Holiday, who died at age 44, has been told and retold in countless books. What is it about Holiday that keeps drawing us to her?

These films, then and now, sought to capture every side of Holiday that has converged into the legend we are still captivated by today. She was an “unladylike” lady who did not shy away from her struggles with addiction. Her youth was grim — born to two teenage parents and turning to sex work in her teens — and adult life rife with abusive men. She loved children, though she never had her own. She was upfront with her enjoyment of sex, with both men and women.

John Swzed, the former director of the Center for Jazz Studies at Columbia University, said Holiday had a mysterious nature about her, emphasized by her many contradictions. For instance, Swzed said, she often would sing the same song differently depending on the day or on the audience, something that today’s pop stars likely couldn’t get away with. In both her live and recorded performances, she would sing off the beat.

Her voice, too, was both unique and limited compared to other notable singers of the era, like Dinah Washington and Jo Stafford. Swzed also said Holiday had “one of the narrowest ranges of any singer.”

Before Holiday, this approach to singing wasn’t desirable, experts have noted. It’s as if her rise marked a pre-Holiday and post-Holiday era in jazz history.

“Things like that broke the mold and showed people it was possible to do it,” Swzed said. “You admire people who don’t follow the rules and still succeed.”

For Robert O’Meally, author of “Lady Day: The Many Faces Of Billie Holiday,” her untraditional performance was an essential part of her “genius.”

“She didn’t need any training,” O’Meally said. “She did things straight out of nothing.”

Her ability to personalize songs made her performances seem autobiographical; audiences were captured by her ability to make them feel. She sold out shows, even after drug charges revoked her cabaret card — the document that allowed her to legally sing in venues that sold alcohol, which was most nightclubs. After spending 10 months in federal prison for drug charges, she returned to the spotlight and sold out Carnegie Hall.

Amid her success, Holiday’s misuse of narcotics, namely heroin, became a focal point of her career while she was alive, and it’s been a fixture in her story today. Griffin said the sensationalization of Holiday’s addiction “tragicized” her, and was used to reshape her story over the years into one of fragility and pity.

“She had this combination of beauty and vulnerability and tragedy, and we have narratives throughout history that you can just slide a woman into that fit all of those categories,” Griffin said. “We tend to like our artists tragic, especially our women artists.”

The publicity around her addiction also made it impossible for her to ignore that people were aware of her personal struggle; that choice wasn’t one Holiday got to make for herself. She did choose, however, to address her addiction in a way that differed from how other stars of the era did.

“She doesn’t apologize,” Swzed said. “She doesn’t say ‘I misspoke’ or ‘I’m walking this back.’”

As recounted in Swzed’s book, “Billie Holiday; the Musician and the Myth,” Holiday once said, “I never felt inferior to anybody, and I couldn’t learn to act as if I did. That was my trouble.”

Both her story and society’s understanding of addiction is partially skewed by viewing it as a crime, rather than a health condition. Complications from her drug and alcohol use ultimately killed her, but there was also the lack of appropriate care throughout her life and hostile treatment from the government that prevented a healthy pathway to recovery. But Holiday couldn’t walk away from the drugs and alcohol any more than she could walk away from how she sang.

In her autobiography, Holiday remembered the first time she sang “Strange Fruit.”

“The first time I sang it, I thought it was a mistake,” she wrote, “there wasn’t even a patter of applause when I finished.”

Then one person began to clap nervously. Then the rest of the audience joined.

More than 80 years later, Holiday’s take on “Strange Fruit” has lost none of its power.