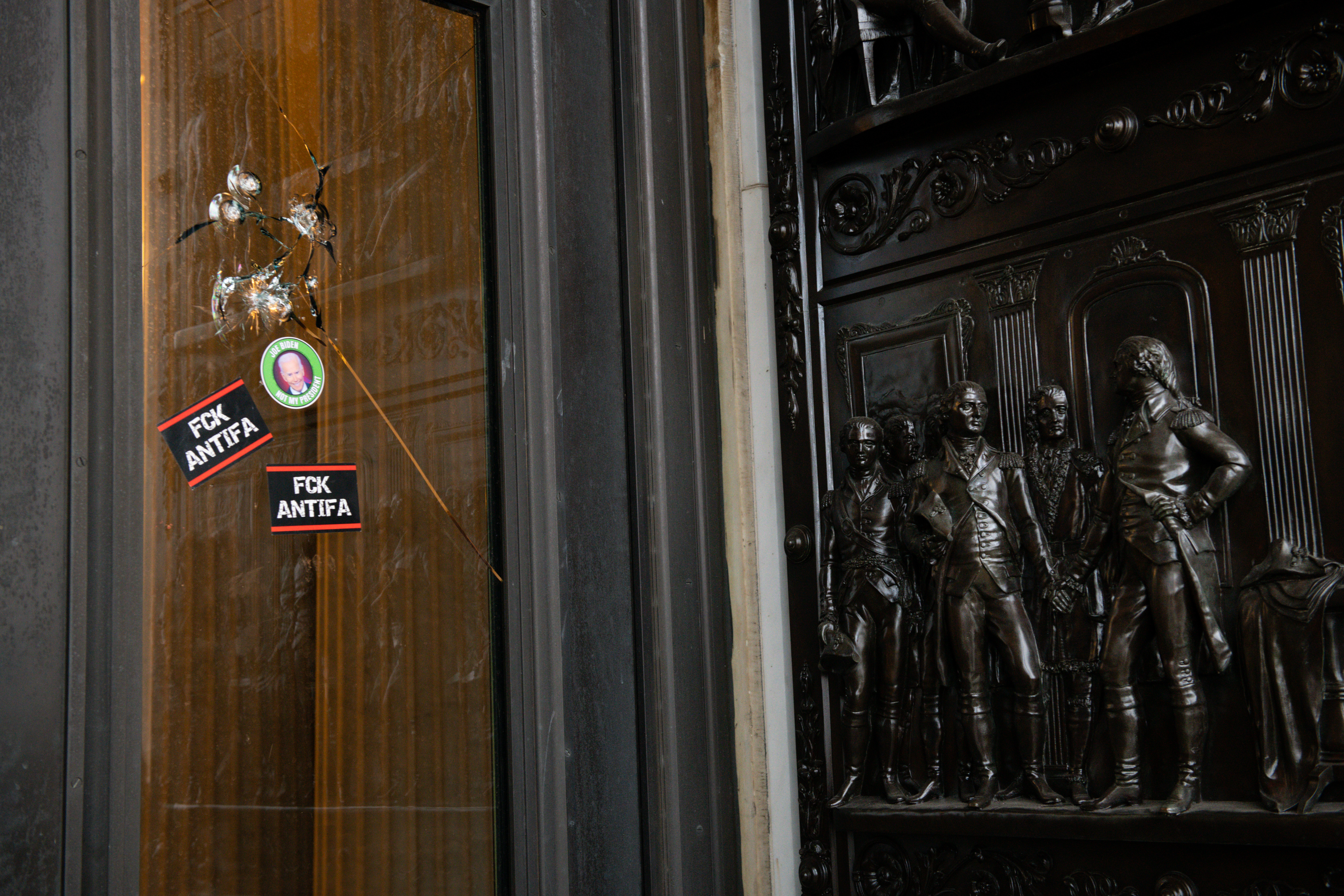 Nearly as soon as the tear gas settled on the U.S. Capitol grounds on Jan. 6, the conspiracy theory began to pick up steam.

“Earlier today, the Capitol was under siege by people who can only be described as antithetical to the MAGA movement,” Laura Ingraham told her viewers on Fox News that night. “They were likely not all Trump supporters, and there are some reports that antifa sympathizers may have been sprinkled throughout the crowd.”

Sean Hannity and Tucker Carlson echoed similar sentiments on Fox that night, and in the day following the attack, Rep. Matt Gaetz, R-Fla., Rep. Paul Gosar, R.-Ariz., and Rep. Mo Brooks, R-Ala., all repeated the conspiracy theory as well. The morning after the riot, so did Rush Limbaugh.

In those 24 hours, the lie that the rioters were actually antifa was mentioned more than 400,000 times online. It peaked on the anonymous imageboard site 4chan around 1 p.m. on Jan. 6, according to the Social Media Analysis Toolkit, which is around the same time that the barriers at the Capitol were breached. Then the sowing of doubt spread further: first on Parler and Twitter, then on Reddit, then on Fox News and in the halls of Congress.

There was no evidence for these claims then, and there still isn’t any now. Shortly after the riot, the FBI directly refuted the conspiracy theory, saying there is “no indication” that antifa — a decentralized collection of far-left groups and individuals — was involved. To date, no one who has since been charged in the attack appears to have any connection to the anti-fascist movement either.

Still, the idea has stuck. On Feb. 12, one of former President Donald Trump’s attorneys echoed it at Trump’s second impeachment trial. On Feb. 23, during the first hearing regarding the breach at the Capitol, Sen. Ron Johnson, R-Wis., blamed the attack on “fake Trump protesters” and “agents provocateurs” presumed to be antifa or “leftist agitators.” And in a Suffolk University/USA Today poll released last week, 58% of Trump voters said they viewed the events of Jan. 6 as “mostly an antifa-inspired attack that only involved a few Trump supporters.”

Stickers reading “Fck Antifa” are stuck on a broken window at the U.S. Capitol after the building was breached by rioters on Jan. 6. CREDIT: Graeme Sloan/Bloomberg via Getty Images

But an NPR analysis of more than 280 people charged in the Capitol insurrection reveals a far different picture of the attack than the one painted by this baseless conspiracy theory — and it comes from the perspective of the rioters themselves.

The individuals charged for their alleged involvement on Jan. 6 show a dogged fixation on antifa, not unlike the right-wing media. More than 1 in 10 specifically mentioned antifa by name regarding Jan. 6 at some point before, during or after the riot, according to court documents. They spoke of antifa to law enforcement but also in text messages, on Facebook, Twitter and Parler, and to some of the people who ultimately turned them in to the FBI.

A handful repeated the conspiracy theory that antifa individuals were among the mob in a significant and organized way, but the vast majority did not, according to NPR’s analysis.

In fact, some rioters seemed annoyed that antifa was getting the credit for the Capitol attack, and they took to social media to say so.

“Listen up: I hear so many reports of ‘Antifa’ was storming the capital [sic] building. Know that every single person who believes that narrative have been DUPED AGAIN!” Ryan Taylor Nichols, a Marine Corps veteran charged in the attack, posted on Facebook on Jan. 7, according to court documents. “Sure, there may have been some ‘Antifa’ in DC, but there wasn’t enough to ‘Storm the Capital’ [sic] themselves.”

Court documents show another man charged in the riot, Brandon Straka, wrote on Twitter on Jan. 6: “It was not Antifa at the Capitol. It was freedom loving Patriots who were DESPERATE to fight for the final hope of our Republic.”

Jonathan Gennaro Mellis, charged with assault for allegedly trying to stab police officers with a large stick, put it simply on Facebook: “Don’t you dare try to tell me that people are blaming this on antifa and BLM. We proudly take responsibility for storming the Castle.”

The birth of a “boogeyman”

Many alleged rioters spoke of antifa as if the movement were an enemy combatant in a war, court documents show, and they were doing so before Jan. 6. The chatter on 4chan ahead of the riot, for instance, wasn’t just about “stopping the steal,” says Randy Blazak, the chair of the Oregon Coalition Against Hate Crime, who has researched extremist movements for 30 years.

“There was also this notion that if you come to Washington, not only [do] you have a chance to stop the steal, you’ll get to bulldoze your way through the antifa folks who are there hand in hand with Congress … so it was kind of a bonus,” Blazak says.

Several rioters said they brought a weapon to the Capitol because of the perceived threat of antifa, according to court documents. David Alan Blair, who is accused of hitting a police officer with a lacrosse stick that had a Confederate flag taped to it, told police he had a knife on him because he was “worried about Antifa and other people trying to jump me,” according to court documents. Another man charged in the riot, Dana Joe Winn, said he brought a flagpole with him to D.C. to “hit antifa in the head if need be.” 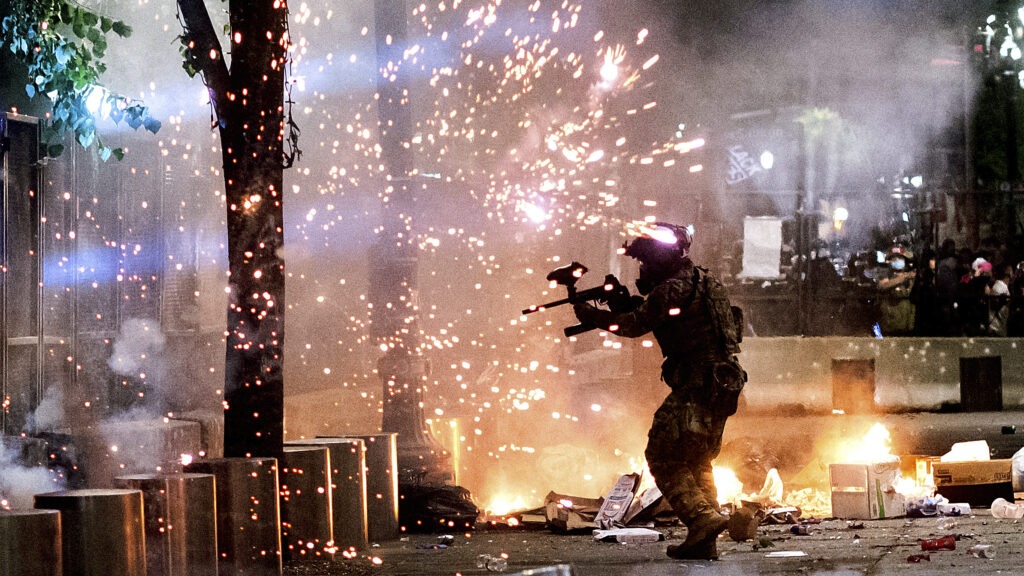 Antifa, an abbreviation of the term anti-fascist, has been around as long as fascism itself. But much of the right’s focus on antifa recently has come out of the protests against police brutality that erupted last summer in cities across the U.S. and, in particular, the images of violence from those protests, Blazak says. Antifa, he says, became a sort of “boogeyman.”

“They point to places like Portland as being hotbeds of left-wing activism and the way Portland went over the summer as sort of a future vision of what’s going to happen to America in their mind,” Blazak says. “They used antifa as sort of a kind of simplification of the forces they face on the left. And it serves them well because it rallies people.”

One man charged in the riot, Joseph Randall Biggs, an Army veteran and an organizer in the Proud Boys hate group, encouraged others to travel to Washington, D.C., for the Jan. 6 rally with specific instructions. He told them not to dress “in colors,” according to court documents. And he allegedly directed an online message at antifa groups, whose members are known for wearing black to counterprotests:

“We will be blending in as one of you. You won’t see us. You’ll even think we are you,” Biggs allegedly wrote on Parler on Dec. 29. “We are going to smell like you, move like you, and look like you. The only thing we’ll do that’s us is think like us!”

Donovan Crowl, who has been charged with conspiracy, is a Marine veteran and a member of the Ohio State Regular Militia, which has links to the far-right Oath Keepers militia group. On Jan. 5, Crowl received a message on Facebook warning him to “keep eyes on people with Red MAGA hats worn backwards,” who were rumored to be antifa. Crowl wrote back: “Thanks Brother, but we are WAY ahead on that. We have infiltrators in Their ranks.” He added that they were expecting good “tifa” hunting, according to court documents.

But experts say this warlike rhetoric is not how antifa works.

“Antifa is not one specific group. I often liken it to feminism. There are feminist groups, but feminism itself is not a group. Similarly, there are antifa groups, but antifa itself is not a group,” says Mark Bray, a historian and the author of Antifa: The Anti-Fascist Handbook. “It’s a way of doing politics to oppose the far right. It’s a kind of ideology or political tendency that any group of people can put into action. There’s no chain of command.”

Some people who identify as antifa do use physical confrontation as a strategy, which was well documented at the Unite the Right rally in Charlottesville, Va., in 2017. But attacks perpetrated by far-left groups like antifa groups make up a small percentage of attacks in the U.S., according to an analysis by the Center for Strategic and International Studies of domestic terrorism incidents from Jan. 1 to Aug. 31 of last year. In that time period, 67% of attacks were attributed to far-right groups, compared with the 20% committed by far-left groups. To date, there has been one possible antifa-related murder, which occurred in Portland last summer, according to the Anti-Defamation League.

But despite those differences, Bray says media coverage of antifa — at last summer’s protests and earlier — has created a sort of “horseshoe” effect, framing antifa as the exact opposite of white supremacist or far-right extremist groups.

“I see that notion coming primarily from the political center and from liberal media, which seeks to demonize what they consider to be the extreme left and the extreme right,” he says.

Once the far right had painted a clear foe in antifa, the umbrella for who fit that description grew larger.

“It’s pretty clear that in far-right circles, anyone that they deem an enemy is essentially an enemy combatant and is worthy of being attacked,” Bray says. “The rhetoric that the far right uses about queer and trans people or people of color or Jews or the media or antifa is all kind of variations of the same flavor of violence.”

That wide net for whom to target was echoed among the Jan. 6 rioters too, according to the court documents analyzed by NPR.

In the months before the Capitol riot, William Calhoun Jr., who was charged in the attack, was making threats on social media, according to court documents, to “kill every last communist who stands in Trump’s way.” In a detention order after the attack, the judge in his case said Calhoun wanted to “wage a civil war against political opponents whom he described as Democrats, communists, the Deep State, and BLM-Antifa.”

The melding of Black Lives Matter protesters, in particular, and antifa into one perceived group also has its roots in last summer’s protests, says Shirley Jackson, a sociology professor at Portland State University who studies social movements.

“When the protests were occurring in Portland in summer 2020, the media was not always making it clear that the things that were occurring in downtown Portland were not always about Black Lives Matter. And in fact, some of the events that were happening were clearly done by groups that associate or by individuals that associated themselves with antifa,” Jackson says.

She says that this conflation served to demonize the Black Lives Matter movement and that right-wing groups capitalized on that.

“They were aware that this would also turn the tables, if you will, on support for Black Lives Matter,” Jackson says. “Once you start to equate Black Lives Matter with antifa, erroneously as it is, for those people who don’t know any better, it means that they can have a clear sense of the enemy, and the enemy is anyone who is not them.”

And once the enemy is clear, it becomes easier to deflect responsibility away from who is really to blame.