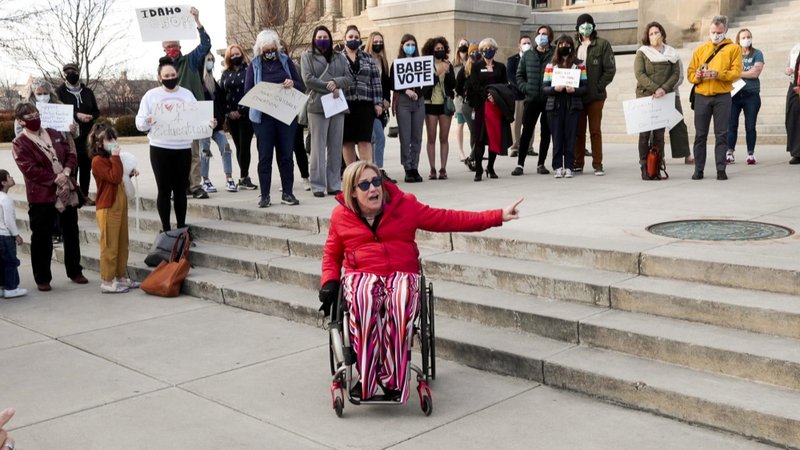 A decision by Idaho lawmakers to reject a $6 million federal grant to improve early childhood education — and comments from one lawmaker who said mothers belong at home — raised the ire of women across the state.

Several dozen gathered Wednesday afternoon at the Idaho Statehouse holding signs with slogans like “Who let the moms out?” to demand that the lawmakers bring back and pass the childhood learning bill.

The grant was awarded to the state by former President Donald Trump’s administration to “support the development of Idaho’s early childhood care and education system” for infants, toddlers and preschoolers. The state education department would have administered it with the help of the Idaho Association for the Education of Young Children, distributing the money to child care programs and other organizations to be used for things like library programs, kindergarten readiness and support for homeschooling families.

Rep. Muffy Davis, D-Ketchum, rallies a group of demonstrators in front of the Idaho Statehouse, Wednesday, March 3, 2021, in Boise. They decried the decision by the Idaho House of Representatives that killed HB 226 the day before. The bill would have would provided $6 million in federal grants for early childhood education in Idaho. The vote was split and failed by one vote. CREDIT: Darin Oswald/Idaho Statesman via AP

But during Tuesday’s debate on the House floor, opponents claimed it would be used to promote social justice or a liberal agenda in the very conservative state.

“The goal in the long run is to be able to take our children from birth and be able to start indoctrinating them, and teaching them to be activists, and to do the things — that we feel as parents and as people coming from a conservatively known state — are inappropriate,” said Rep. Tammy Nichols, a Republican from Middleton.

Rep. Charlie Shepherd, a freshman Republican from Riggins, claimed the grant would hurt “the family unit.”

“I don’t think anybody does a better job than mothers in the home, and any bill that makes it easier or more convenient for mothers to come out of the home and let others raise their child, I don’t think that’s a good direction for us to be going,” he said.

The outcry was swift and strong. Some upset Idaho residents started expressing dismay on social media posts tagged with the phrase “#OutOfTheHome.” On Wednesday morning, Shepherd offered an apology on the House floor, saying he had meant the words as a compliment, not an insult.

“I realize how my remarks sounded derogatory, offensive and even sexist toward the mothers of this state,” Shephard told his fellow lawmakers. “I in no way meant to insinuate that mothers that work outside the home were at any fault in any way. I in no way think the father has any less responsibility or should play any less role than the mother in raising their children.”

The apology didn’t stem the frustration for many.

Emily Walton, a Boise resident and community leader, said she had so many women reach out to her Wednesday morning that she and two friends realized they needed to take action. Walton joined with working Boise moms Hannah Sharp and Jane Gordon and planned the impromptu afternoon rally, helping attendees make signs, write letters to lawmakers and talk to legislators about ways to revive the bill.

Perhaps some lawmakers needed to be reminded that women make up 40% of Idaho’s workforce, Walton said.

“I’m not always surprised at the stuff we see in the Idaho Legislature. We always have to push back and remind them that it’s an honor to serve in our Statehouse, and they don’t get to treat people like that — especially women,” Walton said.

Sharp said Shepherd’s “incredibly offensive” remarks sparked the rally, but she noted that many Idaho residents across the political spectrum support early childhood learning efforts. She said some lawmakers have promised to try to revive the bill so that the state doesn’t end up “leaving $6 million on the table.”

“He apologized for the words he used but not the sentiment behind it,” she said. “It doesn’t take away the fact that he believes that women belong only at home, and it’s incredibly insensitive to women who work out of the home out of financial necessity to support their families. I’m hoping part of his apology will be to come out and support the bill now.”