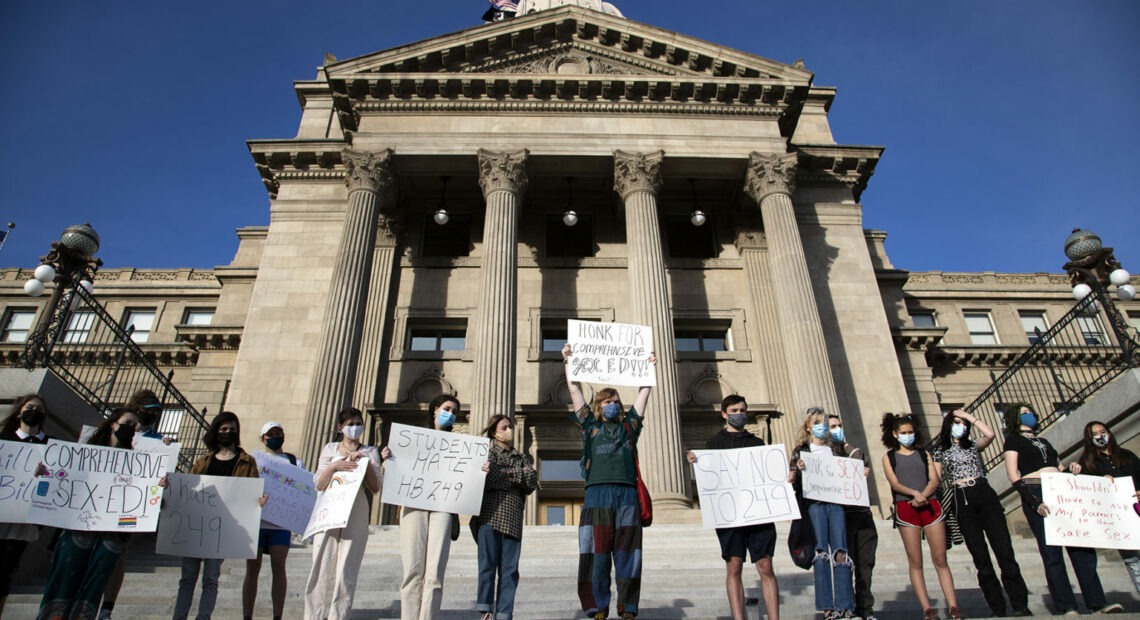 Originally posted on IdahoEdNews.org on March 5, 2021

Students have seen the impacts of sex mis-education.

Friends who think unprotected sex is safe, if it ends early. Assault victims who didn’t know they were raped until years afterward, when they learned their trauma had a name. Youth who take their questions about sex to pornography, and develop unrealistic answers.

“One uneducated student un-educates their friends,” Petra Hoffman, a Boise High School student, told a crowd of Treasure Valley youth gathered at the Statehouse Friday night. “If we’re going to learn math, we need to learn sex ed. It affects our lives.”

Young people took to the Boise streets to protest a bill proposed by Idaho Falls Republican Rep. Barbara Ehardt, which they argue would limit student access to comprehensive sex education in schools.

Ehardt’s House Bill 249 would require parents to sign permission slips for youth to learn about human sexuality. The bill passed the House of Representatives Friday on a party-line vote of 56-12. It heads next to the Senate for consideration.

Current Idaho law allows parents to opt their children out of sex education discussions. Ehardt’s bill would maintain that opt-out process for discussions of general anatomy and physiology of human reproduction. But if discussions go beyond that, into human sexuality, parents would have to sign a form giving their child explicit permission to participate.

“We are not changing the content” of sex education, Ehardt told House members. “We are changing consent, and saying that some of these topics are of such a nature — I think all of them, to be honest — that parents need to be involved.”

A number of Republican representatives argued in favor of Ehardt’s bill, saying it allows parents to defend their religious values and demands more clarity and transparency about sex education curriculum. Democrats said the bill is a harmful and unnecessary response to fears of “inflammatory content” that is not actually being taught in Idaho schools. During an earlier hearing on the bill, Ehardt alleged without citing evidence that teachers are reading storybooks to elementary students teaching children they can change their gender.

Ron Nate, R-Rexburg, cast the bill as a symptom of broken trust between parents and public schools.

“It’s hard to find a parent who hasn’t been horrified at some point about what they’ve heard being taught to their kids at school,” Nate said. “In an area so important as this, that is not just about biology but it is also about values and families and yes, it even does touch religion, we need as much parental involvement as possible.”

Democrats said HB 249 could leave more youth without necessary information to prevent pregnancy and sexually transmitted diseases simply because their parents forgot to sign a piece of paper.

“I can speak to that group because I’m in that group,” said House Minority Leader Ilana Rubel, D-Boise. “I can’t even tell you how many times I’ve found a permission slip crunched up in a ball at the bottom of my kids’ backpack, soaked in yogurt, that is two months out of date and I’m thinking, ‘Oops, I guess I missed that one.”’

Bude and a crowd of two dozen or so students took to the Statehouse steps carrying signs decorated with rainbows and contraceptives. They marched down a crowded 8th Street, drawing honks from rush-hour drivers, and cheers or confused looks from patrons sitting outside at busy restaurants.

“This bill compromises the safety of my entire generation,” organizer Abby Gnojewski, 16, wrote in a news release about the march. “Many teenagers are going to engage in sexual intercourse whether their parents like it or not. Not every child has a parent that is willing/able to have those important conversations with them. Without the crucial knowledge taught in comprehensive sex ed, kids will participate in unsafe sexual activities.”