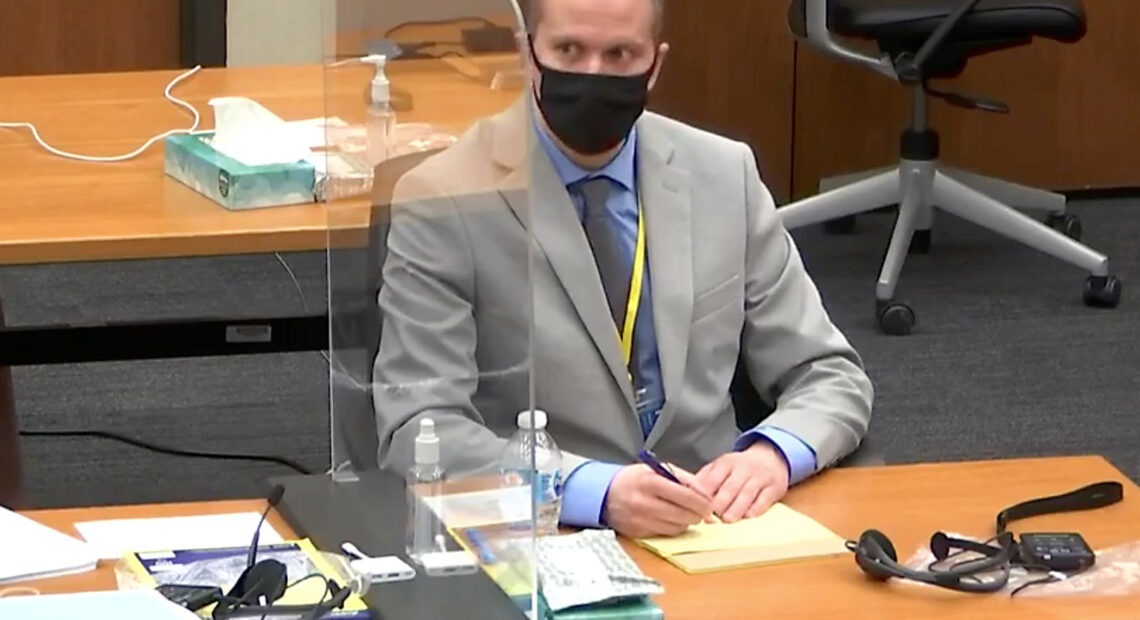 Jury selection in the highly anticipated trial of former Minneapolis police officer Derek Chauvin began in district court on Tuesday, even as the judge in the case awaits higher courts’ rulings that could halt the proceedings. Chauvin faces charges in the killing of George Floyd last Memorial Day.

The first juror in the case was selected late Tuesday morning: a man dubbed Juror No. 2, as he was the second person to be interviewed. The man, whom attorneys later described as white, said he works as a chemist.

Juror No. 2 acknowledged being familiar with the media coverage surrounding Floyd’s death. At one point, Chauvin’s defense attorney, Eric Nelson, asked him if he believes Chauvin is responsible for Floyd dying. 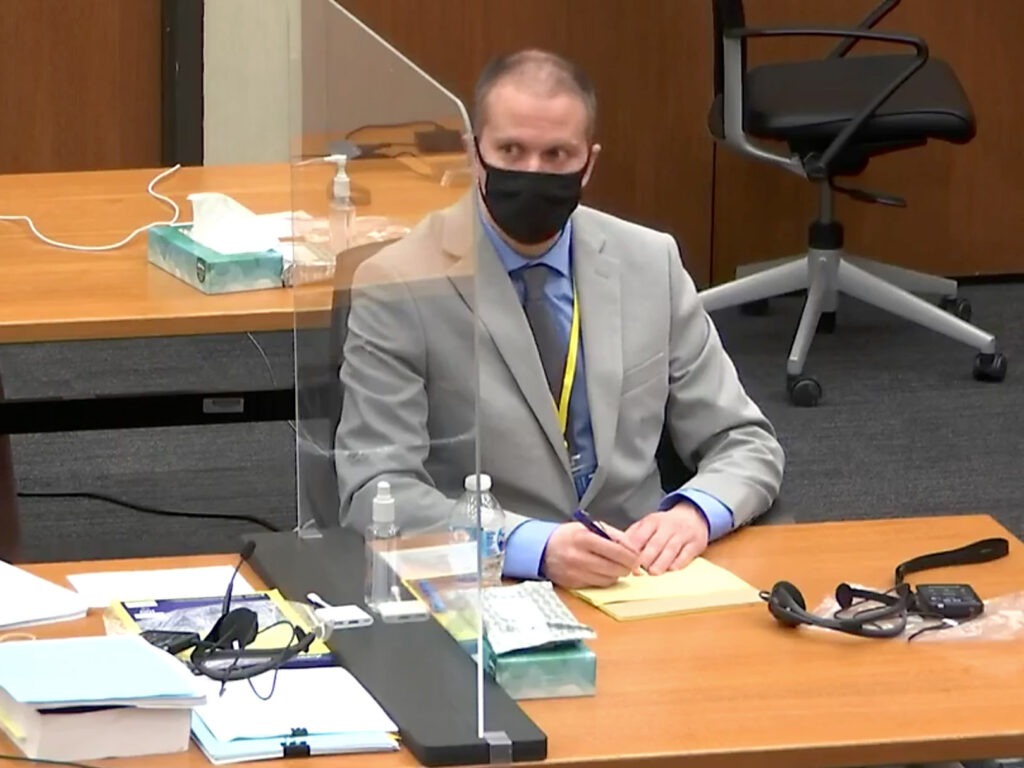 As Nelson concluded questioning the man, he noted that some people respond to jury questionnaires in an attempt to elude jury duty — and some reply in an intentional effort to get on the jury.

“Would you describe yourself as either of those?” he asked the man.

“My answers were truthful. That’s how I would describe my answers,” Juror No. 2 replied.

The trial has gotten off to a tentative start, with both the prosecution and the defense filing appeals after a higher court ruled on Friday that Hennepin County Judge Peter Cahill should reconsider his original decision to dismiss a third-degree murder charge against the former Minneapolis police officer.

At times on Tuesday, Cahill paused to let attorneys check their phones for possible word of rulings from either the state appeals court or the Minnesota Supreme Court.

The subject of race came up midway through the day’s proceedings, as attorney Steve Schleicher of the prosecution team noted that Chauvin’s defense attorneys had challenged two jurors – both of them Hispanic – for cause.

Nelson had challenged Juror No. 1, a woman, citing concerns about her ability to follow the trial in English. She had said she struggled to reply to the court’s questionnaire. Nelson exercised his second challenge to block a Hispanic man who had recently moved to Minneapolis from Southern California.

After the prosecution questioned whether the defense’s explanations for striking the two jurors were “race neutral” – as required by law – Cahill said he believes they were.

Concerns about the woman’s fluency were valid, he said. And in the case of the male juror, Nelson had said the man’s experience in martial arts could make him unwilling to change his view that Chauvin putting his knee on Floyd’s neck was, in the potential juror’s words, “illegal.”

The first panel of potential jurors entered the courtroom around 9 a.m. local time. After Cahill introduced the trial participants, most of the panel left, and the judge administered an oath to a woman he referred to as Juror No. 1.

Under questioning, Juror No. 1 said she was concerned that her fluency in English, which is not her first language, might affect her ability to serve on the jury. She also told Chauvin’s defense attorney, Eric Nelson, that she has limited free time, as she’s a working mother.

The woman then said that after seeing video of the encounter that led to Floyd’s death, she formed an opinion of what happened. She saw Chauvin holding down Floyd with his knee as Floyd said he couldn’t breathe, she said.

“That’s not fair, because we are humans, you know?” the woman added.

In response to questions from Chauvin’s attorney, Juror No. 1 later said she would be willing to change her mind if evidence in the trial required it. She also said she needed help from her husband and Google to translate parts of the questionnaire that all potential jurors received.

The form asked recipients, among other things, why they would want to be on the jury in the case. The woman confirmed to Nelson that she wrote in reply, “Because I would like to give my opinion of the unjust death of George Floyd.”

Shortly afterward, Nelson requested a sidebar with the judge and prosecutors, and Cahill told the woman she is excused from the jury. Because of COVID-19 concerns, such discussions take place over special headsets that the three parties pull on as they sit in the courtroom.

When Juror No. 2 was questioned, he said he and his fiancée had visited the site of Floyd’s death, explaining that Floyd’s death was “a transformative event” for Minneapolis. And he added that the couple had been thinking about moving into a nearby area. He also said he could keep an open mind as he heard evidence about Floyd’s death.

After a brief round of questioning by the prosecution, the man was chosen as the first juror for Chauvin’s trial.

Another man, identified as Juror No. 8, said he and his wife avoid parts of Minneapolis because they don’t see it as unsafe. He also said he believed Chauvin’s actions against Floyd were excessive.

The prosecution later asked to exclude the man from the jury after questioning him about whether he believes law enforcement officers should be second-guessed.

As the trial has loomed, demonstrations against police brutality and racial inequality have regained momentum in Minneapolis. Videos show that Chauvin, who is white, kept his knee on Floyd’s neck for nearly nine minutes before he died. Floyd was Black.

But in their own appeal, prosecutors are asking the state appeals court to delay the trial, saying Cahill’s district court does not have full jurisdiction until the Minnesota Supreme Court has ruled. To proceed with any substantive matters before the murder charge issue is settled, the prosecution warns, could open the door to an appeal after the trial is over.

Cahill has disagreed with part of the prosecution’s argument, saying that in homicide cases, there is precedent for adding or omitting a charge after a jury is selected. But he also acknowledged that the higher court should be given time to rule on the jurisdiction issue.

Jury selection had been poised to begin on Monday, with a pool of potential jurors at the courthouse. But the judge, citing the appeals, said he had no choice but to send the jury pool home for the day.

Despite the initial delay, the court was able to resolve a number of preliminary motions on Monday afternoon, starting to set the scope of testimony and evidence for the trial. And 16 people were dismissed from the jury pool, based on their responses to a 14-page questionnaire they filled out. The form asked potential jurors questions such as what already know about Floyd’s death, whether they took part in a protest and how they get their news.

The two sides also agreed that after witnesses testify, they can’t be called back to the stand if they have watched the trial. But expert witnesses would be allowed to watch other experts’ testimony in case they’re called upon to provide a rebuttal.

The witness list in the Chauvin case is long: 362 people are on the state’s list of potential witnesses, and there are 400 “all told,” when accounting for duplicates from the defense’s side, Cahill said during Monday’s hearing.

The prosecution also agreed that no expert will be allowed to compare Floyd’s death to “the crucifixion of Jesus Christ on the ground that such analogy is prejudicial,” as member station Minnesota Public Radio reported.

Chauvin is attending the court proceedings in person, sitting near Nelson at a partitioned table and wearing a coat and tie and a black face mask.

Floyd’s death inflamed nationwide protests that quickly spread around the world, fueled by the dramatic video in which Chauvin is seen pinning Floyd to the asphalt. “Please, please. I can’t breathe,” Floyd repeatedly said before he died.

Chauvin and the other three police officers who were at the scene — Tou Thao, J. Alexander Kueng and Thomas K. Lane — were fired one day after Floyd was killed. They were arrested several days later. Thao, Kueng and Lane face charges of aiding and abetting murder.