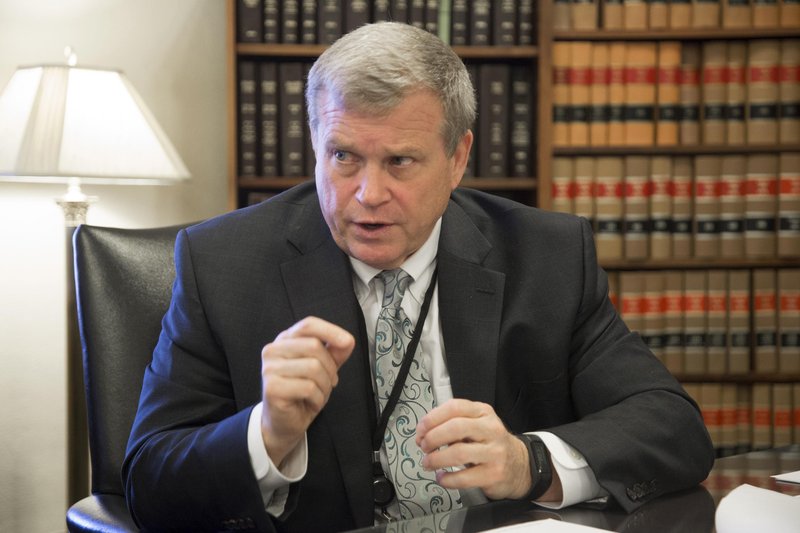 When the Texas attorney general sued to invalidate Joe Biden’s presidential victory in some states despite no evidence of widespread fraud, many said it had no chance.

But among Republicans, particularly in ultra-conservative Idaho, it was a fealty test to Donald Trump, and nearly every top-level Republican in Idaho indicated their support. The exception? Attorney General Lawrence Wasden, who declined to join 17 other GOP attorneys general in the legal action in December. He cited his respect for states rights and said he wouldn’t appreciate others meddling in Idaho elections.

It was the last straw for a Republican-dominated Legislature long frustrated by Wasden. Now, lawmakers are trying to significantly defund his office by removing the attorney general as the primary defender of state agencies. If the effort succeeds, opponents say, it would essentially create a slush fund for political allies and Republican lawyers, costing the state millions of dollars in legal fees and possibly more if it loses in court.

It’s another example of the GOP turning on its own elected officials deemed not sufficiently pro-Trump or who are seen as straying from conservative orthodoxy.

File photo. Idaho Attorney General Lawrence Wasden during a 2017 interview in Boise. GOP Idaho lawmakers frustrated with the Republican Idaho attorney general have put forward a series of bills that could significantly defund his office. Wasden irked lawmakers by not joining a Texas lawsuit to invalidate the presidential election. CREDIT: Darin Oswald/Idaho Statesman via AP

In Georgia, the Legislature is considering election legislation that could restrict the role of the GOP secretary of state, who angered many Republicans by certifying Biden’s win. And Republican lawmakers in states like Ohio and Idaho have tried to blunt the emergency power of a GOP governor over COVID-19 restrictions.

But the conservative anger at Wasden had been building before Trump and the pandemic.

“What strikes me is that Wasden seems less partisan in his actions than what we see from other state attorneys general,” said Jaclyn Kettler, a Boise State University political scientist. “It can be a challenge if you’re not perceived as a strong party player.”

Wasden, who was elected Idaho’s top lawyer in 2003, has called some legislation from conservative lawmakers unconstitutional. The state has paid over $3 million in legal fees since 1995 — some of it after ignoring his advice and losing court challenges.

He warned that a proposed fetal pain abortion law would likely be found unconstitutional 2011. Lawmakers passed it anyway and lost a lawsuit in 2013, forcing the state to pay out $137,000.

Last year, Wasden said a law preventing transgender people from changing the gender on their birth certificates wouldn’t hold up. Lawmakers still pushed forward, and a few months later, a judge rejected it.

He’s also angered Republicans by defending state-owned land and a constitutional mandate to maximize profit from logging, grazing and mining leases on that land to benefit schoolchildren. That can mean higher prices for those industries in mostly rural Idaho.

Legislation that passed the House on Monday would prevent Wasden from representing Idaho’s interest in state lands. Another bill allows agencies to hire private attorneys.

A third bill would prevent Wasden from investigating price gouging at the gas pump. It follows a $1.5 million settlement he reached with gas retailers in November after determining they gouged customers early in the pandemic.

The House also rejected Wasden’s $28 million budget request last week, so it will likely be cut before another vote.

Wasden, who is serving his fifth term, declined to comment on the legislation.

House Minority Leader Ilana Rubel asked for a legal opinion on the measures, and Wasden’s office wrote that they “raise serious constitutional concerns because they interfere with the attorney general’s core function of protecting the state’s legal interests.”

Frequently, Wasden has said his job is “calling balls and strikes.” One critic, Republican Rep. Bruce Skaug, says lawmakers want “an attorney who can throw a curveball.”

Republican Gov. Brad Little hasn’t said whether he would veto any of the legislation.

But he’s defended the attorney general’s office. He and Wasden are members of a board that directs an agency managing about 3,900 square miles (10,000 square kilometers) of state-owned land. Three of Wasden’s 127 deputy attorneys general, commonly called DAGs, are assigned to that agency.

“I’m not all that excited about making radical changes because I see a lot of the good work they do,” Little said last week. “I’ve got a lot of DAGs that do great work for agencies, and they’re a good value for the state of Idaho.”

Deputy attorneys general cost the state less than $60 an hour, on average. Some of the legislation puts the cost of private attorneys at $250 an hour.

Critics say that estimate is far too low. An attorney the Legislature has used for such things as trying to wrest control of federal lands in Idaho costs at least $470 an hour. The Legislature has spent more than $1 million of taxpayer money on private attorneys since January 2020, according to expense records.

Skaug and Republican Rep. Megan Blanksma said the bills aren’t political payback or an attempt to get sweetheart deals on state-owned land. They argue that the attorney general’s office has a conflict of interest in representing state agencies, particularly the Department of Lands because Wasden sits on the Land Board.

“I think we have a good attorney general and have nothing against him,” said Skaug, who’s an attorney.

“Legislators have shown an alarming disrespect for our state Constitution this session, and it is incumbent upon members of the legal profession to call them to account,” said Jim Jones, a former attorney general who also was chief justice of the Idaho Supreme Court.