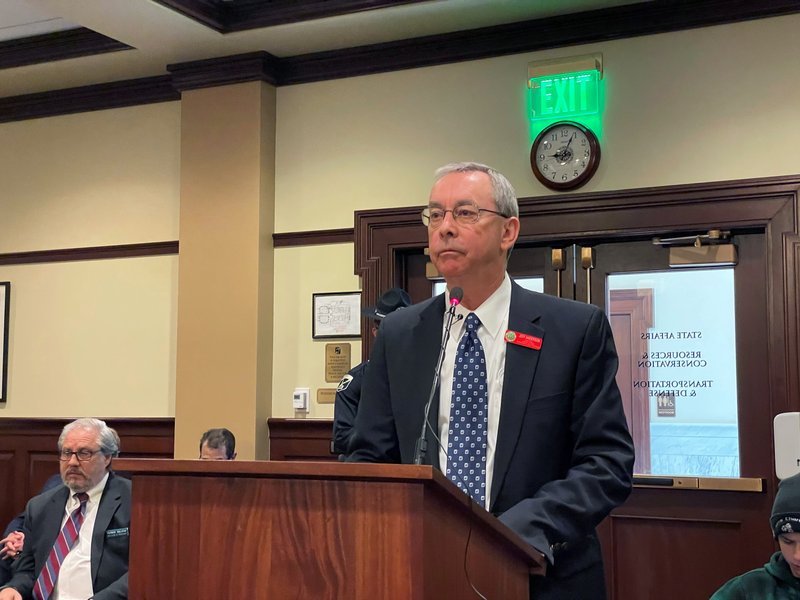 Idaho lawmakers fearing foreign participation in the Powerball lottery killed legislation on Wednesday that would have allowed the game with huge jackpots to continue in the state after a run of more than 30 years.

The move came after Idaho Lottery officials sought a change in state law because Powerball is expanding to include Australia in 2021 and Britain in 2022. But current Idaho law only allows lotteries in the state played by people in the U.S. and Canada.

Idaho was one of the first states to join Powerball in the 1990s. The lottery has since grown to include 45 states, two U.S. territories and Washington D.C. The Multi-State Lottery Association runs the game.

Idaho Lottery Director Jeff Anderson addresses the House State Affairs Committee at the Statehouse in Boise, Idaho on Wednesday, March 10, 2021. The panel killed legislation that would have allowed the Powerball game with multi-million dollar jackpots to continue in the state. CREDIT: Keith Ridler/AP

Idaho’s Legislature is dominated by Republicans, but objections to the change also emerged from Democrats. The killing of the bill by a 10-4 vote by the Legislature’s House State Affairs Committee means that the state’s last Powerball drawing will be in August.

Republican Rep. Heather Scott worried that when Australia joins Powerball, the country’s officials might use revenue generated for government coffers to back causes she opposes.

Scott expressed concern that could happen “in Australia anti-gun causes, which they see as good and we see as not good.”

Democratic Rep. Chris Mathias said the Powerball in Idaho has been good for business and that the state took millions for public education, but had concerns that more countries might be added to the Powerball participation roster.

“My concern is the delegation of authority, and essentially turning over our sovereignty to this Multi-State Lottery Association,” he said. “I think we should be concerned that they could be persuaded, they could be lobbied heavily by countries that we are not particularly friendly with.”

Idaho lottery officials have said the game generates about $28 million in sales annually in the state, with schools receiving about $14 million per year.

Money generated from Powerball ticket sales is held in trust until there’s a winner. The addition of two new countries and more players is expected to increase jackpot sizes.

“This is a big jackpot game, so players like to have big jackpots,” Jeff Anderson, director of the Idaho Lottery, told lawmakers. “One of the ways to do that is to have more players in the game.”

Idaho’s biggest Powerball winner was a resident of the small southwestern city of Star, who won $220 million in 2005.

Some Idaho lawmakers said they feared that the odds of an Idaho resident winning would be reduced with more players.

But the odds remain the same no matter how many players take part because the odds are not based on the number of players, but the chances of particular numbers being selected. If there are multiple winners, jackpots are split.

Anderson tried to convince lawmakers to make the change in state law by assuring them that a country like China — with a different legal system than the the U.S., Australia and Britain — would never be allowed to join.

Republican Rep. Bruce Skaug said he was troubled about the $3 million annually that is spent on advertising to convince people to play Powerball. He proposed the motion that killed the legislation.

“What we’ve got is 32 years of Idahoans being able to participate voluntarily in a lottery game of their choice,” Anderson said after the vote. “Thirty-two years it’s been OK, now it’s not. It’s very troubling.”

Anderson said that Powerball will end in Idaho on Aug. 23 because of the vote.

He warned that besides the money that Idaho schools will lose, the state will face “untold amounts in expenses to unwind all the advertising commitments we have for billboards and point-of-sale materials and everything else. This is going to be very expensive for the people of Idaho.”

Officials at the Multi-State Lottery Association in an email declined comment about the Idaho Powerball decision.