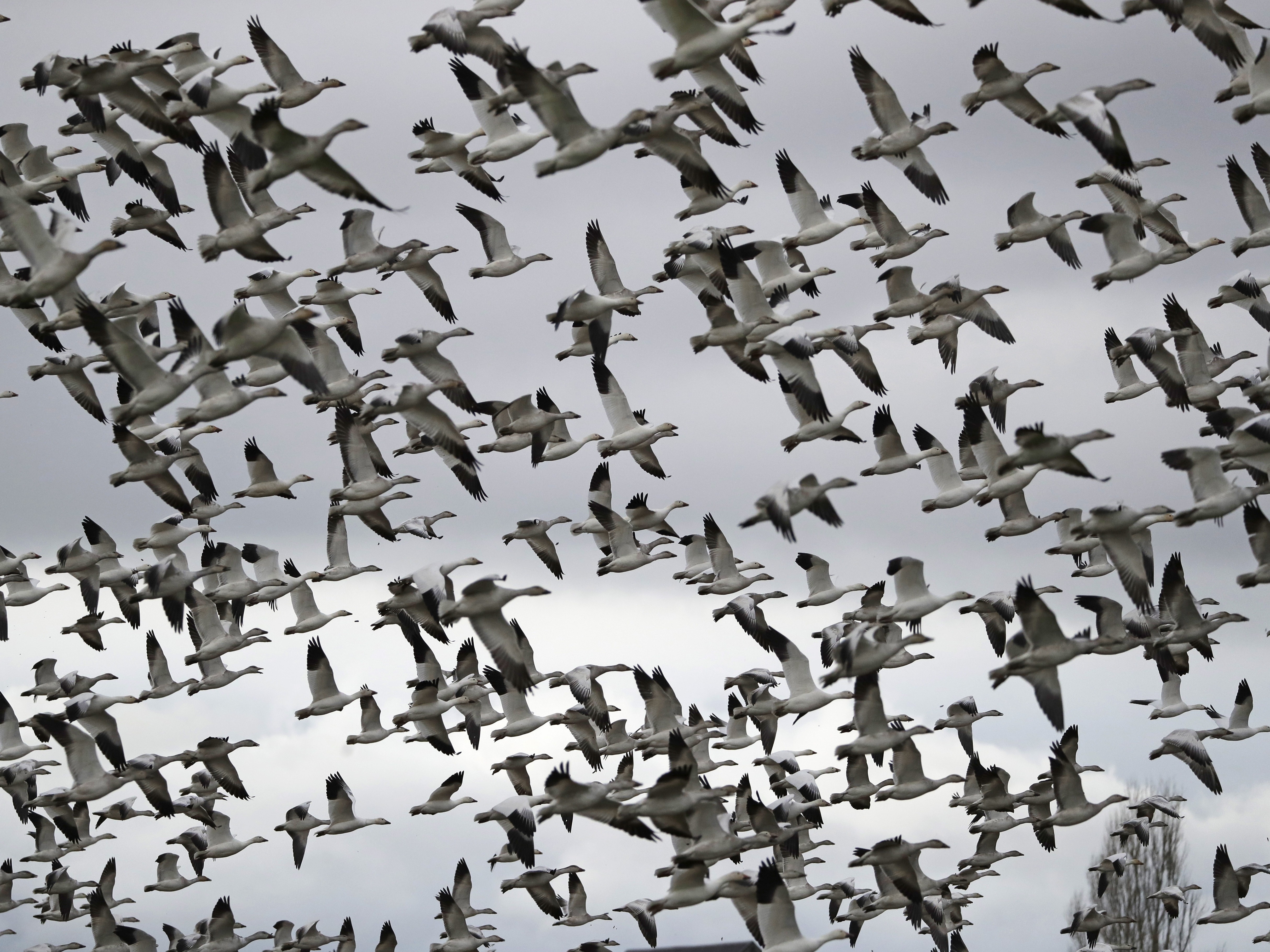 The Biden administration is moving to restore protections for migratory birds that were loosened under former president Donald Trump — a back-and-forth centering on the question of when it’s illegal to kill them.

The Interior Department rescinded a controversial Trump-era legal opinion Monday that limited the scope of the Migratory Bird Treaty Act. It also said it will soon propose a rule to replace one enacted at the end of the Trump administration that did the same.

In tandem, the moves will seek to undo changes that “overturned decades of bipartisanship and international consensus and allowed industry to kill birds with impunity,” said Interior spokesman Tyler Cherry in a statement.

Still, wildlife advocates warn that formalizing the changes will take time, leaving a gap in federal protections for more than a thousand species when bird populations are already in troubling decline.

Thousands of snow geese take flight near Conway, Wash. in 2019. The Biden administration is reversing a policy under President Trump that drastically weakened protections for most U.S. bird species.
CREDIT: Elaine Thompson/AP

The Migratory Bird Treaty Act dates back more than a century, making it one of the country’s oldest environmental laws. For decades, it prohibited not just the purposeful killing of migratory birds — through poaching, for example — but also accidental killing, an act called incidental take. Both individuals and industry could be penalized.

The law was key in 2010, when the BP oil spill — an accident — was believed to have killed hundreds of thousands of birds in the Gulf Coast. BP was fined $100 million under the Migratory Bird Treaty Act.

But the Trump Interior Department changed course, arguing in a legal opinion that the act only prohibited intentional killing of bird species. It said it would not criminally prosecute incidental killings, severely limiting the scope of the law.

“Under the Trump administration, BP could no longer be fined or prosecuted for that,” said Katie Umekubo, a senior attorney with the Natural Resources Defense Council, which was part of a lawsuit against the rule change.

Last summer, the Trump administration opinion was struck down in a searing legal decision from U.S. District Judge Valerie Caproni.

“It is not only a sin to kill a mockingbird, it is also a crime,” Caproni wrote. “That has been the letter of the law for the past century. But if the Department of the Interior has its way, many mockingbirds and other migratory birds that delight people and support ecosystems throughout the country will be killed without legal consequence.”

Despite the legal setback, the Trump administration moved forward with an effort to formalize the opinion in law, a process it finished in the waning days of the administration.

Undoing that could take more than a year to complete, said Sarah Greenberger, vice president for conservation at the National Audubon Society.

In the interim, she warns, more than a thousand species of birds will be without federal protections. That not only puts birds at increased risk from development, Greenberger said, but the all administrative back and forth is “really a waste of taxpayer dollars and people’s time.”

The gap in protection comes at a critical time for North America’s birds.

Last summer, thousands of birds dropped dead across the southwest U.S., falling from the sky. Ornithologists have since determined that the die-off was likely due to climate change. The majority of the birds studied were suffering from long-term starvation.

An earlier study by the Audubon Society found that a warming climate is putting two-thirds of North America’s bird species at risk of extinction. And billions of birds have already died. A study by the Cornell Lab of Ornithology, published in 2019, found that bird populations had dropped by nearly one-third in the last 50 years.

“For birds in particular, we’ve seen all of the warning bells go off that we’re in a biodiversity crisis,” said Umekubo. “By restoring these [federal] protections, we’ll be giving them a fighting chance.”